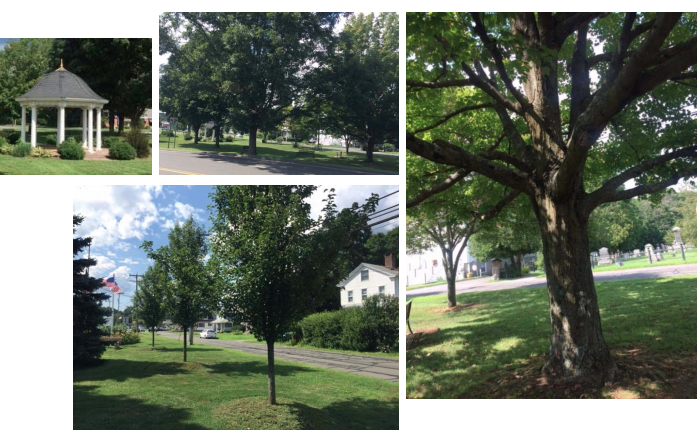 The Save Our Stepney Task Force wants to transform trees on Stepney Green to a living art gallery. Contributed

Save Our Stepney Task Force is proposing “The Blue Trees of Stepney,” a community project painting the trunks and branches of about 15 trees on historic Stepney Green blue this spring. The display would serve as a surreal attraction for drivers passing through Main Street.

The idea of using the “biologically‐safe” colourant for urban and suburban displays is inspired by artist Konstantin Dimopoulos.

“It will make the green an art gallery,” SOS President Joel Leneker told the Town Council at its meeting last week. “It will certainly be memorable. We anticipate we would draw traffic from the region to town.” 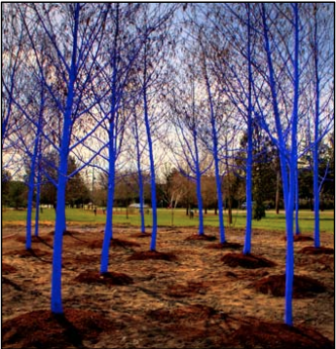 Norcross, Ga., had a Blue Trees display in 2013. Leneker’s presentation included information from the city’s public relations and marketing manager, who reported free advertising of the downtown area from media coverage of the display, as well as an increase in traffic, generating more sales for local merchants.

Leneker said SOS could partner with the Monroe Economic Development Commission and the Monroe Chamber of Commerce. The painting would be done in May or June with the help of community volunteers. If the Board of Education agrees, Leneker said schools could get involved too.

He said 15-foot-tall saplings could be planted and painted blue in four parts of town to advertise The Blue Trees of Stepney. On the green, Leneker said every tree, with the exception of the evergreens, would be painted. 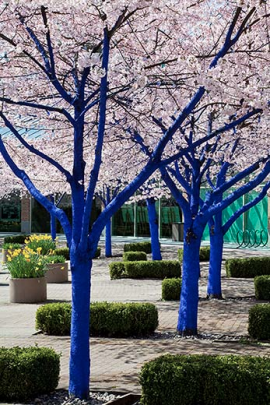 Though Town Council members expressed support for the idea, traffic safety was among their concerns.

“I live on that side of town and there is high traffic with big trucks,” Enid Lipeles, a council member, said. “I think if someone says, ‘Mom, look at the blue tree!’ the parent will look and hit something.”

Chairman Frank Lieto thanked SOS for the “novel idea,” but suggested Police Chief John Salvatore perform a study on the potential impact the display could have on traffic safety.

“When I saw this project, I thought it would be ideal for Great Hollow,” Lieto said.

Jason Maur, another council member, suggested Rails to Trails as a possible site.

Lieto asked SOS to assess the Stepney Green, Great Hollow Lake, Wolfe Park and Rails to Trails and decide which site is the most impactful location.

SOS would contribute $5,000 toward the $12,000 project and raise the rest from corporate and local sponsors. “Our treasury is deep enough to afford this project, but we would like to have as many people participate as possible,” Leneker said.

Jennifer Aguilar, a council member, expressed concern that fundraising for The Blue Trees of Stepney could dilute fundraising efforts for the playground project at Wolfe Park.

If the Town Council does not want SOS to compete with other projects, Leneker said the nonprofit can pay for its entire project. 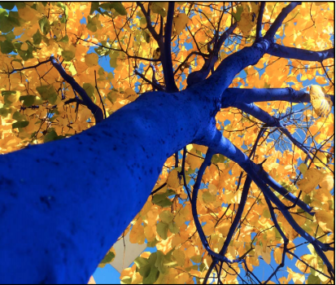 Dimopoulos came up with the idea for The Blue Trees to transform urban landscapes, while bringing attention to environmental issues and the importance of oxygen producing forests that are being destroyed.

“In 2013 The Blue Trees was selected as one of the top 60 ideas that have changed the world. It was selected from 1,022 entries from 73 countries,” according to Leneker’s presentation.

“It is not paint. It is a biologically‐safe pigment in a water base,” the presentation says. “The colourant is safe for plants, animals, insects, humans and waterways, and is classified as non‐hazardous by the Australian National Occupational Health and Safety Committee.”

“Leaves, buds, flowers and thick moss or lichen are not coloured,” according to Leneker. “The colourant can be removed by washing the trees down with water using a medium‐pressure.”

Left alone, the color lasts from eight to 12 months, depending on the weather.