Kevin Solli, an engineer with Solli Engineering LLC, talks to neighbors at an informational meeting about excavation and blasting that will be done at 127 Main St. Developers invited them to the meeting at the Masuk High School library Wednesday evening.

Jay Keillor, of Pond View LLC, received land use approvals to do excavating and blasting to level a rocky property he owns at 127 Main St. and construct a grocery store-anchored shopping center behind the Dunkin’ Donuts and Baskin-Robbins in 2006, but legal battles with opponents of the development tied the work up for 13 years.

“It’s a big mountain,” Kevin Solli, an engineer with Solli Engineering LLC, said of the nearly 20-acre-property. “The application calls for lowering that mountain on the level of Dunkin’ Donuts.”

Solli represents Rockhead 25, which invited neighboring residents to an informational meeting in the library of Masuk High School on Wednesday evening. It was attended by Arnold Karp and Paul Stone, principals of Rockhead, excavator Stuart Rudkin and John Kimball of John Kimball Group, who is working with them.

Though it was not an official town meeting, Schultz said he and Zoning Enforcement Officer Joe Chapman were present as guests to observe the proceeding.

Rockhead must remove all of the rock within three years, according to the agreement, and Solli said blasting is the only way to meet the deadline. He said Rockhead anticipates two to four blasts per month.

However, Solli said blasting is a highly regulated process, which involves the fire marshal. A permit is needed from the Connecticut Department of Energy and Environmental Protection, and the site must be managed to ensure there is no sand or soil erosion and that sediment does not go into waterways when it rains.

Solli said blasting can only be done Monday through Friday and between the hours of 10 a.m. to 3 p.m. Before a blast, he said notification forms must go out to neighbors.

“There’s a lot of liability and responsibility on behalf of the developers,” he explained.

Solli told neighbors to call the men on the panel on their cellphones if they ever have concerns. “They want to make sure you’re happy,” he said. “Call them any time of the day, seven days a week.” 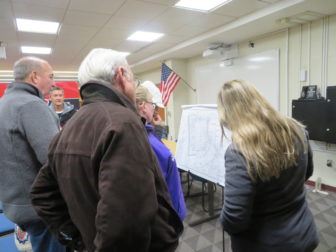 Concerned residents look at the map for the excavation and blasting project at 127 Main St. to see how close it is to their homes at a public information meeting at Masuk High School Wednesday.

Twenty residents attended Wednesday’s meeting. One of them, Sally Lundy, noted how the developers do not know exactly what the retail site will be used for after the excavation.

“Basically, I go way back with this,” she said. “Our concern was there was going to be a quarry advertised and it seems to continue to be a quarry.”

Lundy recalled how Julian Enterprises previously processed material on the site and advertised it online.

“We have specific grades to this site plan the town is going to honor,” Karp said. “Julian has nothing to do with us.”

Karp said Rockhead wants to do its work as quickly as possible, adding he hopes they can finish the job within two-and-a-half years.

Noise from blasting and rock crushing was among the concerns raised at the meeting.

“We’ve been hired to take down a mountain to just above street level,” Karp said. “We’ll use state-of-the-art equipment. It’s quieter. It has dust control. It doesn’t make noise.”

Kimball said the hammering of rock is the loudest part of the process, adding if the blasting is done well, it minimizes the hammering.

Blastech, Inc., a Plantsville firm owned by Andy Nagy, will do the blasting.

Paul Stone said blasting is “nothing like Hollywood” with gravel flying everywhere. “It’s just a bump. That’s it,” he said.

Karp described it as “a horn and a bump.”

One request from residents, concerned over the health of the people living in their neighborhood, was that the developers perform regular testing of their wells throughout the process and they agreed.

Barbara Fahr, admin of the Monroe CT Residents Facebook page, arranged for the developers to become members of the page so they can post updates of the progress of the project. She said some information, such as a closing of Route 25 for blasting, could be of interest to the general public.

Kimball assured everyone there will be no closures of Main Street for blasting.

Fahr also asked that they post a video of blasting, so the public can get a better idea of what it is actually like.

One woman asked about truck traffic and whether a stream of trucks will be flowing onto Route 25.

“I can’t imagine a steady line of trucks, especially not at peak hours,” Solli said. “They can’t afford to have their drivers tied up in traffic.”