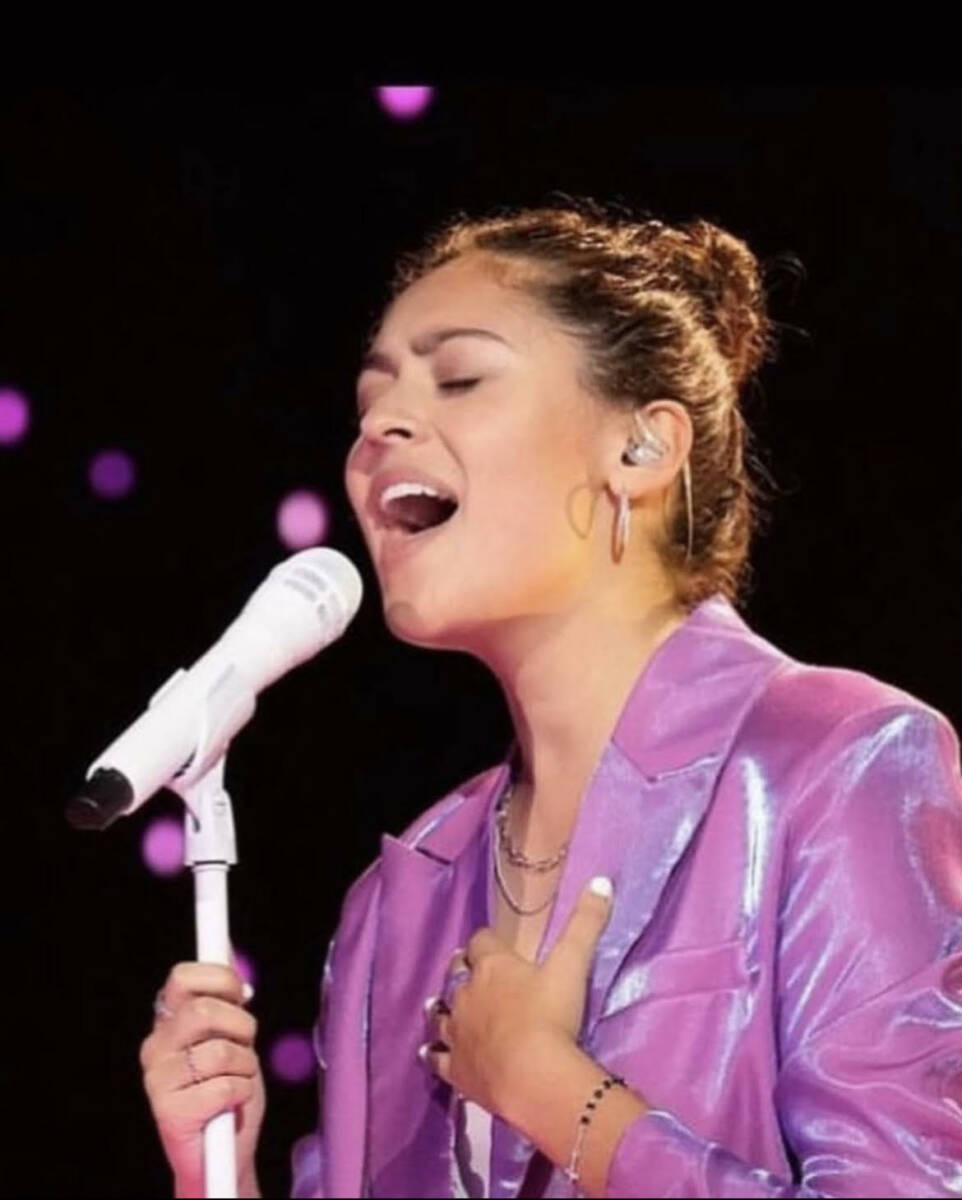 Amanda Mammana has sung at Stepney Baptist Church in Monroe since she was 13 or 14. Here she performs on the TV show, "America's Got Talent."

MONROE, CT — Amanda Mammana, 20, a singer, songwriter and guitarist, who rose to fame on the popular TV show “America’s Got Talent”, may live in Trumbull, but her road to stardom also went through Monroe.

While growing up, Mammana and her sister Sophia, 22, sang together on Stepney Baptist Church’s Sunday Worship Team.

“We’ve watched Amanda blossom from a somewhat shy little kid to this amazingly talented young woman,” said The Rev. Kevin Merritt, senior pastor of Stepney Baptist Church. “It has been such a joy to watch Amanda step out in her dream to
be on ‘America’s Got Talent.'”

Mammana, who enjoys the support of her parents, Michael and Lorene, works hard to overcome a stutter from a speech impediment she has had since age 10.

“We don’t really know if something triggered it, but it gradually came about,” Mammana said in a telephone interview Friday. “I went to a great school. There wasn’t a ton of being picked on. It was more internal, because it definitely hindered my confidence.”

Mammana attended Christian Heritage School in Trumbull, where a fourth grade talent show led to her discovery that she could sing well — and without a stutter.

“I grew up always playing music on my phone,” she said. “There was always a curiosity. I signed up for the talent show and thought, ‘okay, this could be fun.’ At that time the stutter had started and I remember being like, ‘okay, I’m not sure if I’m gonna get so nervous and make it worse,’ but it didn’t get worse. I remember being like, ‘huh, this is really fun and it’s freeing.”

She taught herself to play acoustic guitar through many hours of free lessons on YouTube over seven years, before taking formal lessons for two-and-a-half years.

“I learned on a $50 acoustic guitar starting out, but the ones I play now are a bit nicer,” Mammana said of her instruments.

She auditioned for “America’s Got Talent” to increase her exposure and was chosen to compete.

‘You are good enough’ 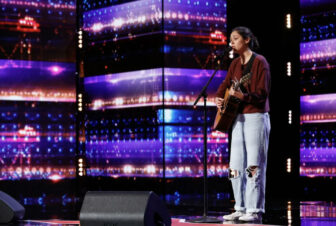 Amanda Mammana makes her debut on “America’s Got Talent.”

The live audience for “America’s Got Talent” waited patiently through long pauses as, then 19-year-old Amanda Mammana, standing onstage with a guitar slung over her shoulder, steadied her breathing between words to tell them her name and where she’s from.

“As you could probably tell, I have a bit of a speech impediment,” she said. “And it was definitely something that caused me to shy away and to hide, but I found that I don’t stutter when I sing.”

The crowd encouraged her and Howie Mandel, one of the celebrity judges on the panel, said, “Oh wow. Is it going to be a song we know? Is it an original?”

“I will be singing a song that I wrote and it’s just about some hard times and, if I could go back and change those things, I wouldn’t because they made me me,” Mammana said.

She looked around nervously for a moment, her glance moving to her father, who stood off to the side of the stage, his eyes welling up with emotion. The camera zoomed in on a woman sitting in the audience, “it’s okay,” she called out.

Mammana played her guitar and sang her original song, “Worth Fighting For”, and when she finished the crowd erupted into a standing ovation. The camera cut to her father as a smile spread across his face.

Mammana mouthed the word “wow” as tears streamed down her cheeks.

Mandel told Mammana he could see how emotional she was. She said, “there were times when I was a kid when I thought, ‘I could never do anything like this. I’m not good enough.'”

“You are good enough!” a woman called out and the audience cheered.

The judges, Mandel, Heidi Klum, Sofia Vergara and Simon Cowell, praised Mammana for her performance and she continued to the next round.

Mammana would reach the semifinals, but was eliminated when the number of finalists were cut down from five to three. 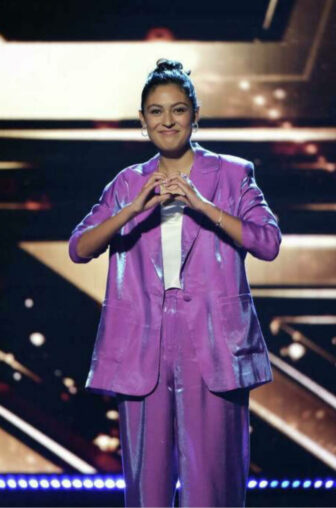 Mammana said her experience of appearing on “America’s Got Talent” gave her confidence that she could pursue a successful music career.

“I think when I first signed up I was like, ‘this could be cool and give me exposure,’ but I didn’t realize it would change who I am and how I view myself,” she said. “It was just a ton of fun and I got to meet so many talented people and kind people. That was just a bonus.”

Jeff Baker of Next Records recently signed Mammana to a record deal.

“We’re crowd funding for it now and writing for the album,” she said. “Next summer we’ll be in the studio recording the album.”

To make a donation toward Mammana’s first album, click here.

Mammana went to Liberty University in Virginia for a semester last year, before coming home and taking classes online. She took last semester off, but plans to head back to school in January. 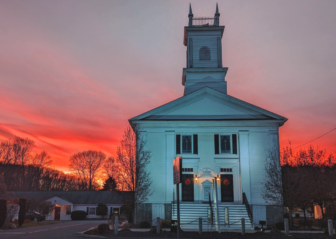 Roy Spalding shared this photo of a sunset behind Stepney Baptist Church on Main Street.

When Mammana performed on “America’s Got Talent” local fans gathered for watch parties at Christian Heritage School and Stepney Baptist Church to cheer her on.

“I’m super grateful for those two communities, because they definitely helped to shape me as who I am right now,” she said. “Those are the two main places I went to growing up and I just had incredible teachers and friends and pastors. They mean the world to me.”

Merritt said his church celebrated every step of the way.

“We were completely blown away by her poise and maturity at just 19-years-old,” he said. “Most of all, her candidness about overcoming her speech impediment inspired us and millions who saw her on ‘AGT’ as Amanda sang in her live performance, ‘It was All Worth Fighting For’!”

Through her experience of overcoming personal challenges, Mammana said she hopes to inspire others.

“I think I’ve come to realize that everybody goes through things, some can be hidden or it can very noticeable in others,” she said. “I think it doesn’t matter what you’re going through. You’re not alone.”

“Growing up, I didn’t know anybody else who had the same issue as me,” she said, “but getting to hear from people now, even from different countries, who tell me they struggled with the same thing as me, it just assures me that we are not alone.”