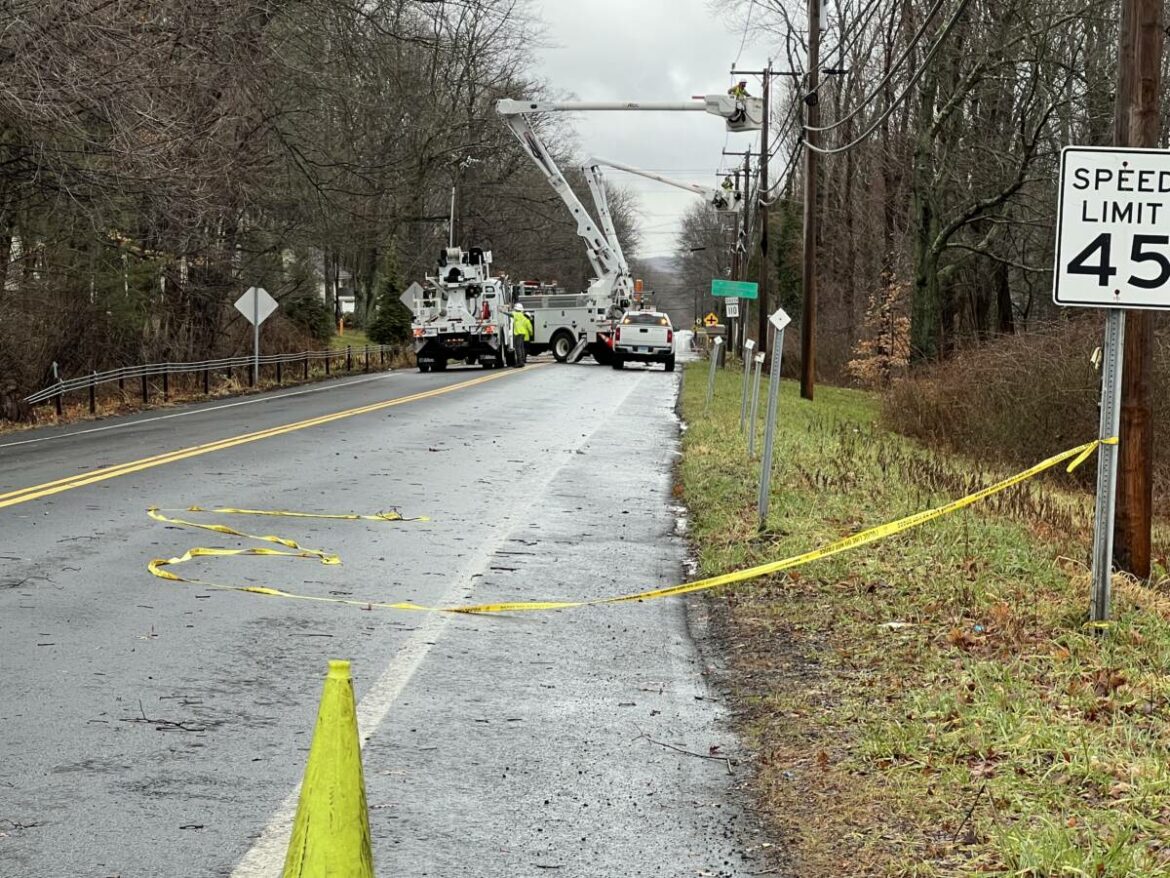 An Eversource crew works on a utility pole on Shelton Road (Route 110), near the intersection with Moose Hill Road, late Friday morning.

MONROE, CT — Monroe Public Works and Eversource crews are responding to 11 road closures from downed trees, wires and, in one case, an exploding transformer, in the aftermath of a rainstorm with high winds Friday. Over 1,400 homes were still without power as of 12:45 p.m.

Earlier this morning, someone drove a vehicle over a down wire in the roadway on Judd Road, at Hiram Hill Road, and got tangled up in it. Police Lt. Stephen Corrone said the wire was not energized.

“Police are maintaining the closures as best we can with the officers we have, so we would appreciate if citizens don’t remove the tape and barricades to drive around it, because it is there for safety issues. When they do this, there are bigger issues.”

Damage from the storm caused over 1,700 outages in Monroe, but First Selectman Ken Kellogg said repairs brought that number down to 1,442.

He said Eversource estimates power will be restored to around 360 homes on one stretch of Moose Hill Road, and another portion further up with 77 homes, by 2:30 p.m.

The first selectman had not received estimates for the rest of the outages.

Hundreds of Eversource line and tree crews are working to restore power following the powerful rain and windstorm that hit Connecticut overnight causing widespread damage to the electric system and thousands of power outages, according to a press release from the power company.

Crews are working around-the-clock shifts to address emergency situations, clear blocked roads, assess damage and restore power to customers impacted by the fierce storm. Lineworkers from the energy company’s Massachusetts team are arriving this afternoon to assist with restoration. As of 1:30 p.m., crews have restored power to more than 80,000 customers since the storm began. Approximately 70,000 Eversource customers in Connecticut remain without power as a result of the severe storm.

“We know the timing of this storm couldn’t have been worse as people are trying to prepare for the Christmas holiday,” said Steve Sullivan, president of Eversource Connecticut. “The damaging winds and heavy rains with this storm brought down trees and tree limbs onto overhead lines and equipment causing damage to the electric system and widespread power outages in most of the 149 towns we serve.”

“We have hundreds of crews on the ground working but with outages being so widespread it will take time,” he said. “Our employees – many of whom have sacrificed their holiday time off – are committed to working around-the-clock until all of our customers affected by this storm have their power back.”

Police reported 11 road closures from the storm. Here’s the rundown:

Route 110 (Shelton Road) at Stony Brook Drive: A transformer exploded and there was a fire in the roadway. There were no injuries and Eversource crews are working at the scene. The nearest cross street is Moose Hill Road.

East Village Road at Route 111 (Monroe Turnpike): A tree was down on primary wires and the road was not passable.

A downed tree near 187 Hattertown Road blocked the entire roadway.

There was a report of a downed power line on Judd Road, at Hiram Hill Road, where a driver got tangled up in the power line while trying to go around the taped off area.

A partial closing was reported near 266 Old Newtown Road when a tree took down wires, blocking the north lane of traffic.

A tree came down on wires at 45 Guinea Road, but the road is passable.

A tree leaning on near 683 wires on Elm St. led to a closing there.

A tree took down wires on Moose Hill Road, near the Shelton line, blocking the entire road.

“Eversource crews, paired up with our public works crews, are working to open the roads, which is always a priority,” Kellogg said. “I’m hoping they will continue to make strong progress.”