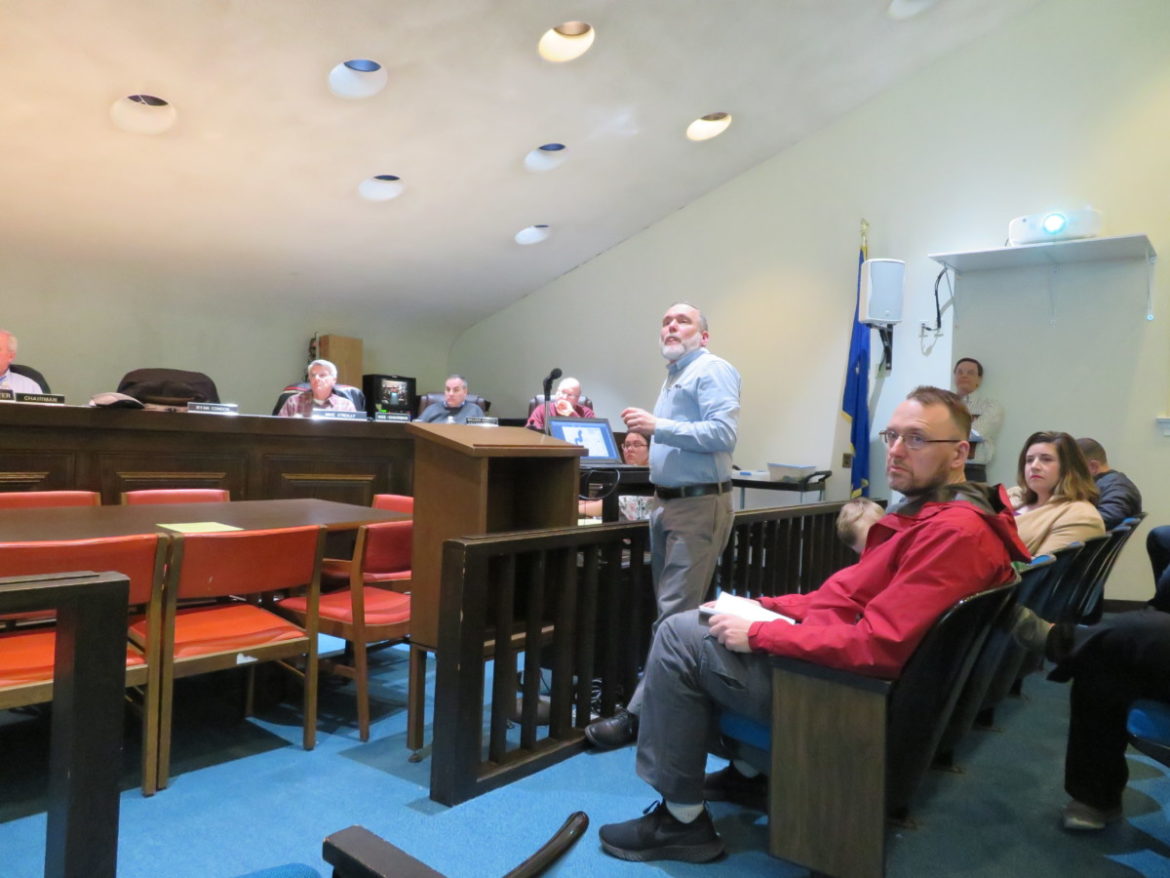 Thomas J. Linden, of Linden Landscape Architects, does a presentation on the drainage and landscaping plan for the EMS building project at the Planning and Zoning Commission hearing Thursday.

MONROE, Conn. — Monroe Volunteer Emergency Medical Service members attended a hearing to support a building project that would enable its facility, inside Jockey Hollow Firehouse, to meet their present and future needs.

Neighbors of the site at 54 Jockey Hollow Road also went to last Thursday’s Planning and Zoning Commission hearing to either oppose the location of the project or to express concerns over lighting and setbacks.

EMS Chief Donald Smith told the commission how the organization’s move into the firehouse 17 years ago was meant to be temporary.

“We had two ambulances and about 1,000 calls a year at that time,” Smith said, adding the space was not big enough then. “Now we have three ambulances and a fly car and respond to 1,500 calls.”

In addition to the growing number of medical calls and apparatus, Smith said training needs have increased and there is no room to even conduct a full membership meeting.

“We sometimes have to move tables out of the room or apparatus out of a bay to make room for training,” Smith said. “We have no offices for our administrative staff.”

Brian Humes, of Jacunski-Humes Architects LLC, a Berlin firm, was hired by the EMS Building Committee, which was formed by the Town Council and is chaired by Councilman Terry Rooney.

He said the project includes office space, a conference room, a training classroom, a day room and a full kitchen, as well as bathrooms and showers upstairs where members of the overnight crew sleep. There would also be a new public entrance with public restrooms.

“The project is only funded through the building phase, so while we show a design and drawings that appear complete, this project still needs funding from the town to be completed,” Humes said.

Thomas J. Linden, of Linden Landscape Architects in Wethersfield, gave a presentation on the drainage plan, which was approved by the Inland Wetlands Commission.

One part of the parking lot has a slope issue, making it be within 25 feet of a neighboring property line, so the Building Committee needs to seek a variance.

Planning and Zoning Commission Chairman William Porter also pointed out that some revisions are not reflected in the site plan, so the hearing was continued to the April 2 meeting.

Smith talked about the cramped conditions in the current EMS facility. He said an administrator uses a desk at the top of the stairs and Smith has a desk between two beds and a bunk.

Though EMS crews on late shifts are expected to stay overnight, there are no bathrooms with showers upstairs. Rather than a full kitchen downstairs, there is a small area with a microwave and a refrigerator.

Smith said the day room has two couches, but it is not enough.

“We’re just asking for what we need,” he said. “There’s no fluff in this application at all. This is just what we need for our current use today.”

EMS Capt. Megan Slingo said the EMS has to uphold Monroe’s designation as a Heart Safe Community and that the building project will give them room to host CPR, Stop the Bleed and First Aid classes.

The proposal includes a land transfer joining a town-owned-parcel at 345 Fan Hill Road to the firehouse property at 54 Jockey Hollow Road. This would allow the building area to remain at 25 percent lot coverage.

Kermit Bierut, of Jockey Hollow Road, questioned that part of the plan and wondered why it calls for 64 parking spaces when it says the need is 37 spaces.

Bierut estimates that a reduction of 14 spaces could save 3,780-square-feet of land from being built upon.

His wife, Nichole, said they have lived next to the Jockey Hollow Firehouse for 25 years and agree with the EMS’s facilities needs. However, the parking lot would extend behind their property.

Nichole Bierut estimated the EMS parking lot would be at capacity 10-to-15 percent of the year for training.

“I would have the parking lot 100 percent of the year,” she said. “I feel this plan will significantly, negatively impact my property value. I believe there can be a compromise between the building committee and the neighbors.”

Bill Kaiser, of Chalk Hill Road, asked who would occupy the day room. “I just want to make sure it doesn’t turn into a clubhouse,” he said.

Smith said four-to-five people would be there at once, adding they are not partiers.

Dorothy Kaiser, Bill’s wife, expressed concern over lights from the parking lot shining onto their property.

“The EMS, I think it’s wonderful for them,” she said of the building project. “I think it’s a nightmare for me. I worry about the wildlife in the woods and our home value will be lower. I feel like we’re being encroached upon.”

Dorothy Kaiser said she feels like the plan is being shoehorned into the property and that town officials should look for a more suitable site.

Though 345 Fan Hill Road would be joined with the firehouse land, Humes said the wooded property would not be touched.

He said the plan asks for 64 parking spaces to ensure that all cars fit onsite in a way that does not impact emergency response times when ambulances have to get out of the bays.

“We don’t want to go over the parking need,” Humes said. “We are exceeding our minimums with 64 spaces, but we have no parking overflow.”

The property will include a screen fence and a buffer of 10-to-12-foot-tall fur trees, so neighbors don’t have to look at the parking lot, according to Linden.

Unlike firefighters, who respond to emergency calls from firehouses in different parts of town, Smith said EMS has only one location, so it needs to be centrally located to have the fastest response times. He said that makes 54 Jockey Hollow Road “the best spot.”

“We try to be a good neighbor,” Smith said. “We’re always open to talking to the neighbors if there’s a concern.”