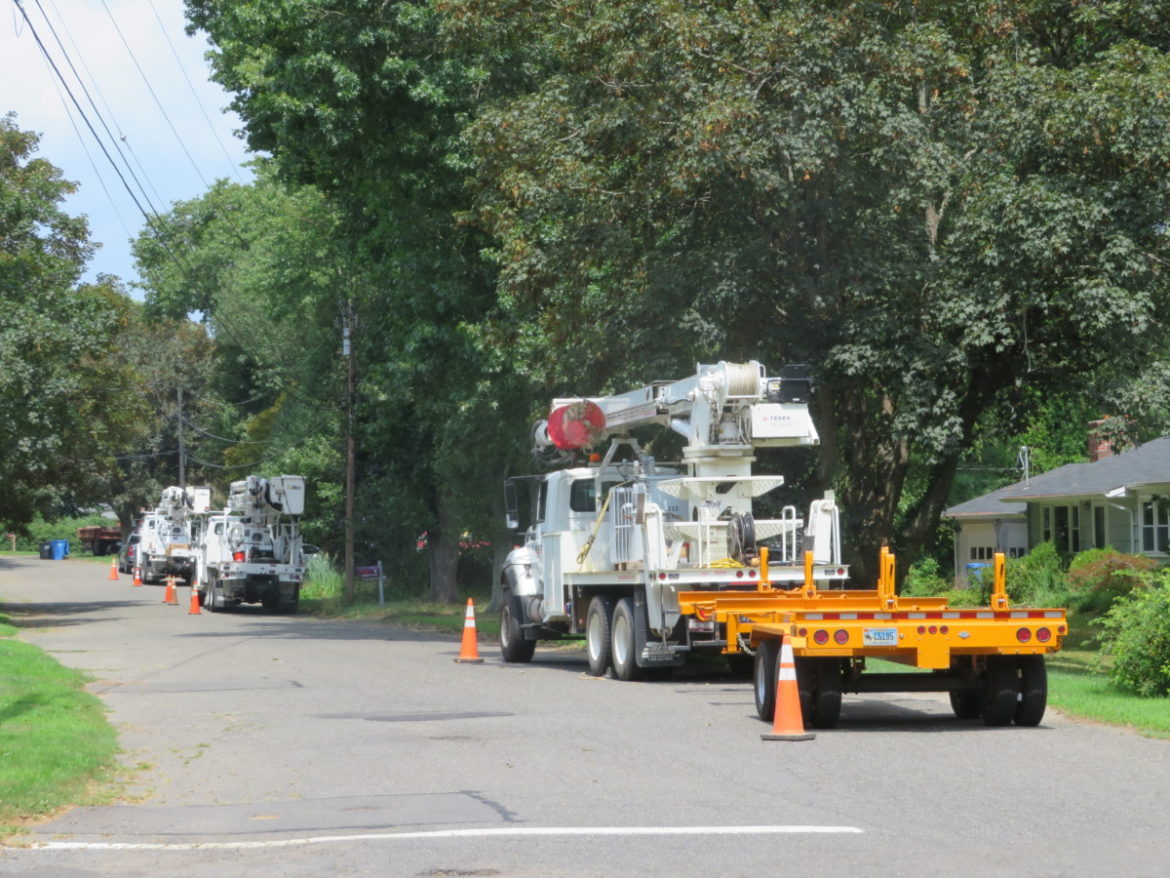 MONROE, CT — Marc Salomon sat on a bench inside the Town Hall gazebo with his daughter Tuesday afternoon, while waiting for his cellphone to power up at the charging station. His two young sons played video games on their devices on another bench and his wife relaxed at a picnic table in the hot summer sun nearby.

Tropical Storm Isaias knocked out power to the Salomons’ home on Webb Circle last Tuesday and the family of five has been out ever since. When all of the food in their refrigerator spoiled, Salomon said they tried to wait until the next garbage pickup day to empty it, but the rotting smell became so strong, they emptied the contents in their yard.

The Salomons have a hotspot on their cellphones, enabling them to access the internet and work from home. But the couple has had to make visits to the town charging station a daily ritual.

The Salomons join the many Monroe residents who have been feeling a growing frustration with each passing day without electricity or answers.

“Eversource has been very inconsistent with its reports, so we keep getting hope it is going to end soon — but we’re still out,” Salomon said. “We saw trucks yesterday, but it didn’t help us.”

On Monday, First Selectman Ken Kellogg expressed his anger over a lack of communication and specific information from Eversource throughout the storm recovery effort. He said he even sent people out to find trucks that day.

But by Tuesday, Police Capt. Keith White, who is also the town’s emergency management director, said the energy company had restored power to  approximately 1,000 Monroe customers overnight and he noticed numerous power and communications trucks at various locations in town this morning.

Eversource’s goal was for Monroe to be substantially restored by 6 p.m. tonight (Tuesday), which means returning power to at least 99-percent of its customers.

“They have a chance,” White said. “I don’t know if it will be completely restored, but after a slow start, they actually started correcting some issues.”

Kellogg said he was encouraged by the increased visibility of crews. As of Tuesday afternoon, 982 of Eversource’s 7,980 Monroe customers were still without power, bringing it down to 12.31 percent, according to the company’s outage map.

“Our liaison advised us they were sending in multiple crews this morning,” Kellogg said Tuesday. “A crew on Wheeler Road made repairs that returned power to a lot of people. But we have not been given information beyond that, which is part of the frustration.”

“There’s definitely a lot of activity going on,” he added. “Hopefully, we’ll see the numbers continue to go down.”

In a press release issued Tuesday, Eversource said more than 2,500 line and tree crews have been working statewide to restore power to more than 58,000 customers since Monday. Nearly 26,000 of its Connecticut customers were still without power, but the company said it remains on track to be substantially complete by tonight at 11:59 p.m.

“We’re at the late stages of the restoration process where the final outages often call for extensive repairs that are labor-intensive and time-consuming,” said Craig Hallstrom, Eversource’s president of regional electric operations. “For example, we can have five or more crews — which can be about 18 people – working most of the day to repair the damage at one location and that will bring power back to only one customer.”

Hallstrom said Eversource is fully committed to restoring power to every single customer and thanked the men and women who are been part of the response to the storm, which he said rivals that of other historic storms in terms of the destruction it caused. 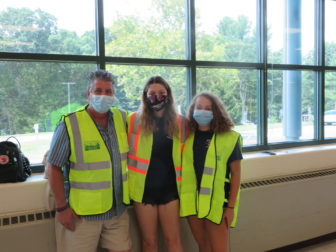 Gregg Celentano, left, his daughter Lucy, center, and Emily Florin are members of the Monroe Community Emergency Response Team. They staffed the town cooling station at Masuk High School Tuesday afternoon. No residents were using it at the time.

An out-of-state contractor for Eversource told a resident on Shelton Road (Route 110) that a large tree tangled up in wires was the town’s responsibility, according to Kellogg, who said the power company is responsible whenever wires are involved.

“I’m sure they’re not intentionally giving out wrong information,” he said. “We had our people looking into it.”

Late in the morning, a police officer directed traffic on Route 110 as Eversource and work crews removed the downed tree.

Earlier in the morning, the Monroe, CT Residents Facebook page asked those without power to post the names of their streets, so a list could be compiled for the first selectman to use as a reference.

It was a lengthy list of over 50 streets, some with downed trees and other damage.

While waiting several days for their power to come back, Salomon said he and his wife have kept their children entertained by playing card games and even doing shadow puppets.

“They ask when the power will be back. We tell them, ‘hopefully today,'” and it isn’t,” he said. “We have to pay the electric bill next week. How frustrating is it to pay the company that is not responsive to us? And the rate hike has become very upsetting.”