Police said the owner parked his Toyota in his driveway around 11 p.m. the night before and the theft occurred sometime overnight.

The vehicle was left unlocked with the keys and the victim’s wallet, hand tools and a valve meter inside, according to the report. Police said the wallet contained identification and credit and debit cards.

The incident is under investigation.

Theft from a vehicle

A wallet containing approximately $130 in cash was reported stolen from an unlocked vehicle parked in a driveway on Maple Drive Tuesday.

Police said the theft occurred sometime overnight and the victim discovered it the next day.

Thieves attempting to enter two locked vehicles in a driveway on Farm View Road early Tuesday morning not only failed to gain access, a video surveillance camera recorded footage of the incident, according to police, who are investigating the complaint.

A Monroe woman was contacted by her bank over fraudulent activity in her account, including unauthorized transfers of $280 and $282 in August. Both were used for payments to Sprint, police said.

The bank reimbursed the victim and she was advised to contact the three major credit bureaus to flag her accounts for fraud, according to the report. 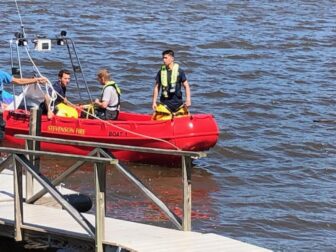 Stevenson firefighters responded to a water rescue call on Lake Zoar Thursday afternoon, with Monroe firefighters among their crew, after a boat capsized, with someone clinging to it by The Waterview, heading toward Stevenson Dam.

Firefighters reported finding the capsized catamaran and the victim walking in shallow water alongside it.

Stepney firefighters also assisted on the call, as well as Riverside Fire Co., the Monroe Police Department, the Lake Zoar Authority, the Oxford Police Department and the Connecticut Department of Energy and Environmental Protection.