BRIDGEPORT, CT — A 30-year-old Bridgeport man was arrested on a Monroe warrant at Superior Court Friday, stemming from an incident in which he allegedly purchased $1,800 worth of prepaid debit cards from Rite Aid with counterfeit money on May 16, 2021.

Kadeen Robinson was charged with first-degree forgery, fourth-degree larceny, criminal attempt of larceny in the sixth degree, and criminal attempt at forgery in the first degree. He was held on $2,000 bond and remanded back to the custody of the Department of Corrections, where he was being held on unrelated charges.

Police said Robinson bought the prepaid debit cards from the Rite Aid at 508 Monroe Turnpike with cash on May 16, and the store discovered the money was counterfeit while depositing the bills at the bank.

On May 17, police officers were called to Rite Aid to investigate the complaint.

Officers also spoke to the manager of the CVS Pharmacy across the street, who told them a man also tried to purchase cards from them on May 16 around the same time, but employees refused the transaction, because they believed the bills were fraudulent, according to a press release issued by police.

Based on surveillance footage from CVS and Rite Aid, police said they were able to determine the same suspect was at both locations.

During the investigation, detectives developed Robinson as a suspect through the use of surveillance footage, witness statements and other evidence, police said. Officers then applied for the arrest warrant from Superior Court.

Police are investigating the burglary of a home on Monroe Turnpike, reported on Friday night.

A man returned to his home around 9:47 p.m. to find his garage door open, as well as an interior door into his house, police said, adding thousands of dollars worth of jewelry was missing

Crash onto a frozen pond

A 27-year-old Chester, N.Y., woman escaped injury after being involved in a serious crash in a parking lot off Main Street Saturday morning. Police said she managed to get out of her 2021 Lexus IS 350 as it crashed through a wooden guardrail and dropped nearly 20 feet to a frozen pond, landing on its roof.

She told police she was driving on Route 25 around 9:19 a.m., when she turned onto a commercial parking lot at 464 Main St. and attempted to drive around the building, according to the report.

Police said she attempted a left turn when her vehicle slid on the icy surface and headed toward the wooden guardrail. 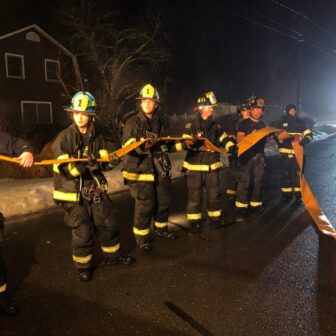 Monroe firefighters were dispatched to a house on Lorraine Drive on the report of a house fire around 5:30 Thursday night and encountered a smoke condition throughout the home.

The fire was contained to the furnace and firefighters checked for extension, metered for carbon monoxide and used a fan to ventilate the home, according to a Monroe Volunteer Fire Department, No. 1 Inc. Facebook post.

“We remind residents to have their furnaces inspected and cleaned annually,” firefighters said.