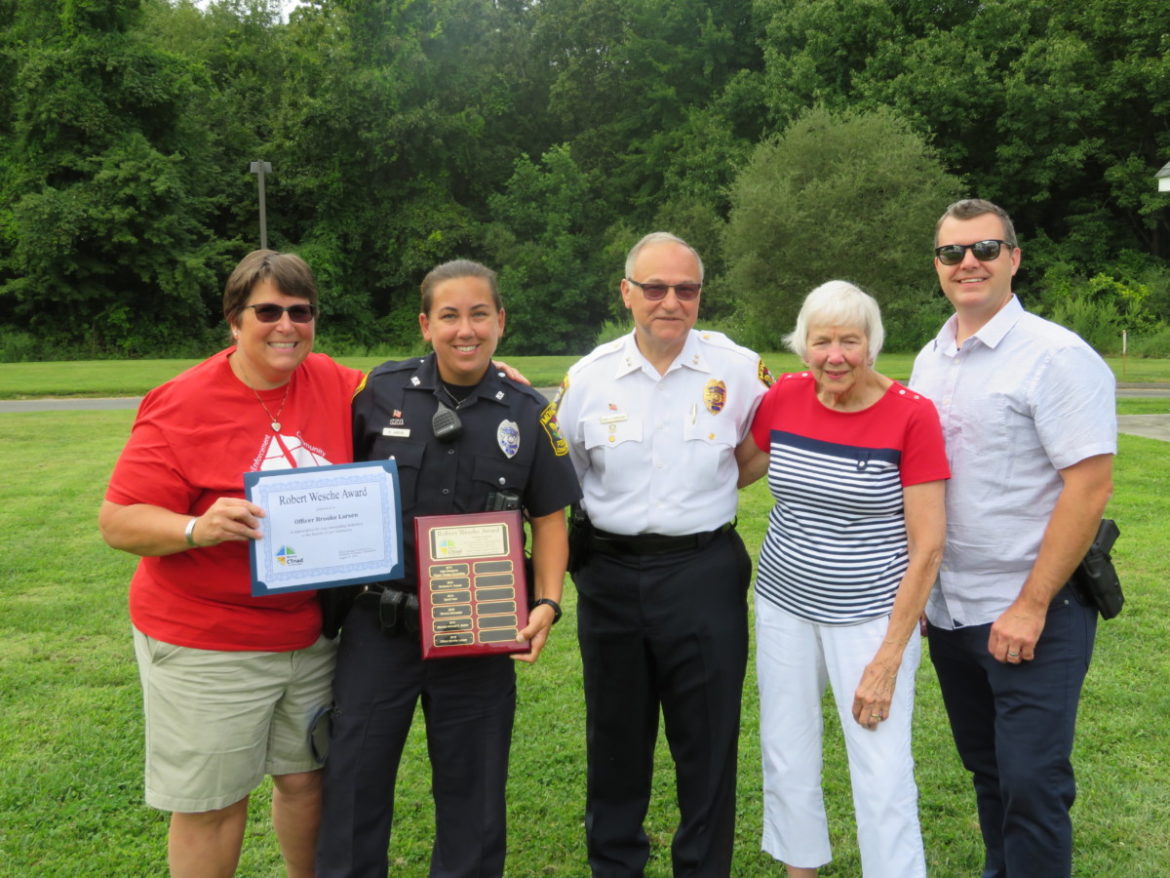 Kim Cassia, left, presented the Wesche Award to Officer Brooke Larsen, to her right, in recognition of her work benefiting seniors. Also attending the ceremony at the Monroe Senior Center were, from left, Chief John Salvatore, Peggy Wesche and Lt. Kevin McKellick.

Police Officer Brooke Larsen was honored with the Wesche Award in recognition for her expansion of the Locating Alzheimer’s Patients Safely (LAPS) program, which gives officers the information they need to find seniors registered in the program more quickly when patients wander off and get lost.

“The Wesche Award is for somebody who goes above and beyond to help seniors in this town,” said Kim Cassia, chairwoman of the Monroe Triad.

Cassia presented the plaque to Larsen during a ceremony on the senior center lawn Tuesday afternoon. It was attended by Monroe Police Chief John Salvatore, Lt. Kevin McKellick and Peggy Wesche, the widow of the late Robert Wesche, a Monroe police chief of 21 years who the award is named after.

“I was a little surprised and obviously very grateful to work for this department that allows me to take my visions and put them into action,” Larsen said of receiving the award.

Larsen grew up in town and graduated from Masuk High School in 2004. She has been a police officer for 13 years.

Retired Police K-9 Officer Dennis Bradshaw had started the LAPS program years ago to provide police with a photo and basic information about Alzheimer’s patients registered in the program, so they would have something to go on at a time when family members are upset and may not be thinking as clearly when answering officers’ questions for a search.

When Larsen started the Monroe Police Department’s Crisis Intervention Team, she expanded the LAPS program to include more information and stored all the data on the computers officers use in their patrol cars.

Elderly people with Alzheimer’s often become confused and revert back to an earlier time in their lives. They will sometimes speak in another language if English is not their first language, according to Larsen. She said they also may wander off and try to go where they lived or worked 30 years ago.

“Our officers can look at photos and identify people who don’t have identification on them, but are in the program,” Larsen said.

She said around 20 residents are currently registered in the program.

Larsen said Monroe officers are trained to pass along the information to her when they go on medical calls involving an Alzheimer’s patient. Larsen then contacts the family and tells them about LAPS.

In one case, Larsen said Newtown police officers found a woman, who was lost and only spoke Portuguese. They asked Monroe police for help in identifying her and Larsen sent the woman’s photo to Cassia.

Cassia recognized her as a Senior Drive resident who had wandered away from her caregiver.

Larsen said police registered the woman into LAPS in case she ever got lost again. “I met with her family and filled out the form,” she said. “It makes our job easier.”