MONROE, Conn. — Police arrested a second suspect in the theft of thousands of dollars from the Henny Penny convenience store on Roosevelt Drive Wednesday.

Lance Peters, 33, of 15 Argonne Terrace in Seymour, turned himself in on a warrant charging him with fourth-degree larceny. He was held on $5,000 bond and arraigned the same day.

While working at the convenience store last year, Peters and another employee, William Washington Jr., 26, of Old Zoar Road in Monroe, allegedly scanned and voided items, while keeping money from transactions, according to police.

The scheme went on from April through October of 2019 for a total theft of $8,967, police said, adding the store realized something was wrong when the recorded inventory was unusually high when compared to the actual inventory of merchandise in the store.

Washington turned himself in on a warrant charging him with third-degree larceny in January.

Buffalo Biodiesel reported the theft of used cooking oil from behind the building of its customer, Mr. Mac’s Canteen, at 838 Main St., Thursday.

Police said the $15 lock to the used cooking oil collection tank was cut and stolen, along with the $20 lock bar. An unknown amount of oil was taken.

The thefts may date as far back as Jan. 29. Buffalo Biodiesel pumps the tank once every five months, so police said they don’t know when the incident occurred or how long it could have been going on.

Police said thieves would likely recycle the oil for resale. 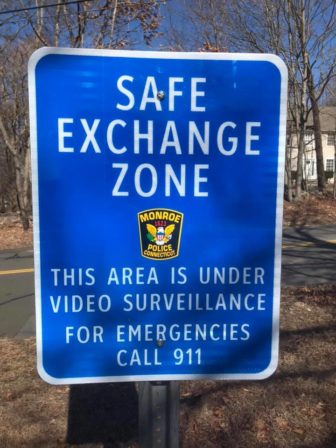 This photo is from the Monroe CT Police Department Facebook page.

Residents making sales and purchase through sites like Craigslist and eBay now have a safe area to make the exchange.

Police Capt. Keith White said it is marked with a sign indicating the area facing Church Street is under video surveillance, monitored by police security cameras 24 hours a day.

“If someone is not willing to come to the police department to conduct a transaction, then it is likely not a legitimate transaction,” White said Friday.

White and First Selectman Ken Kellogg had both seen similar zones in other towns.

“I think it’s a great idea,” Kellogg said. “My only concern was finding an appropriate spot for it.”

The first selectman encourages residents to take advantage of the safe exchange zone.

On Thursday, the Monroe Police Department filed a post about the new zone on its Facebook page. It included these tips:

• Only conduct transactions with local buyers/sellers.
• Do not go to a transaction alone.
• Make sure a friend or family member is aware of the transaction details.
• Insist on meeting in a public area like a designated safety zone.
• Do not go into someone else’s house and do not allow them into yours.
• Complete the transaction during daylight hours.
• Be extra cautious when buying or selling valuable items such as vehicles and jewelry.
• Trust your instinct. If it sounds like a scam, it probably is.