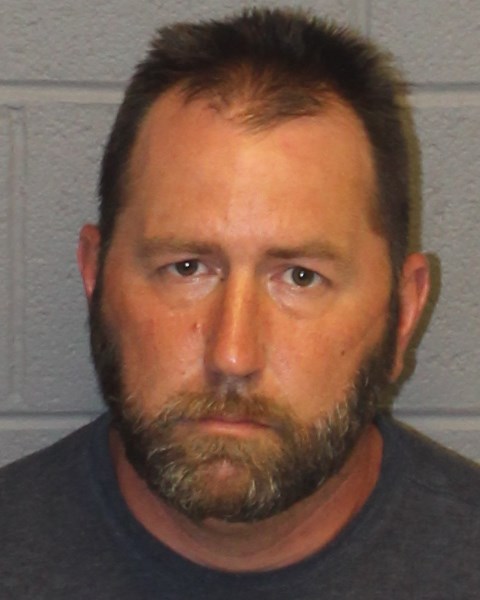 MONROE, CT — A Newtown man turned himself in on two warrants, charging him with DUI and drug possession Tuesday. The charges stem from the crash on Main Street, which knocked out power and brought wires down onto another vehicle on April 24.

Daniel J. Flanagan, 42, of 56 Great Hollow Road, was charged with two counts of possession of a controlled substance, DUI and failure to drive in the proper lane. He was released on a total bond of $6,000 for a June 3 court date.

At approximately 8:57 p.m. on April 24, police received several 911 calls about a pickup truck that crashed into a utility pole in the 180 block of Main Street (Route 25). Another driver was reportedly trapped inside a vehicle when live wires fell onto it.

Police said officers told the occupants of the vehicle under the wires not to get out until it was deemed safe to do so.

The pickup truck hit a chain-link fence in a yard nearby, where it came to rest. Flanagan, who was sitting in the driver’s seat, was unconscious and officers administered two doses of Narcan to revive him, police said.

Police said officers found one packet of heroin and two ecstasy pills inside the truck.

An investigation of the crash determined Flanagan was driving north on Main Street at a high rate of speed, went off the road to his left, crossing over the southbound lane, and struck a utility pole, before going 86 feet into a yard and hitting the chain-link fence, according to police.

Ahmed Mohammed L-Mouwfi of Tanglewood Road was also charged with improper use of high beams, failure to drive in the proper lane, and operating a vehicle with a suspended license. He was released on $500 bond for a June 1 court date.

Around 2 a.m. on Monday, an officer were patrolling Route 111 (Monroe Turnpike), near Historic Drive, when an Infinity G37 passed by with its high beams activated, according to the report.

Police said the driver kept the high beams on and drove on the double yellow center line, nearly swiping the patrol car as he passed. The Infinity then went toward the white fog line and back across the center line, police said.

The officer turned around to follow the car, and saw it swerve within its lane several times as he attempted to catch up to it, police said. The Infinity was stopped just south of the intersection of Routes 111 and 110.

As the officer approached, the odor of an alcoholic beverage could be detected from the vehicle’s open window, police said, adding the driver’s eyes were bloodshot and glossy.

Police learned that the driver, L-Mouwfi’s license was suspended and L-Mouwfi did not perform field sobriety tests to standard, leading to his arrest, according to the report.

An employee from Phoenix Communications reported a gray hydraulic hammer stolen from a construction site on Pepper Street Thursday.

Police said the $14,000 hydraulic hammer was being rented from Sunbelt Rentals.

Phoenix Communications was completing construction work on Pepper Street, near Jockey Hollow Road, over the past two weeks and keeping its equipment nearby, police said.