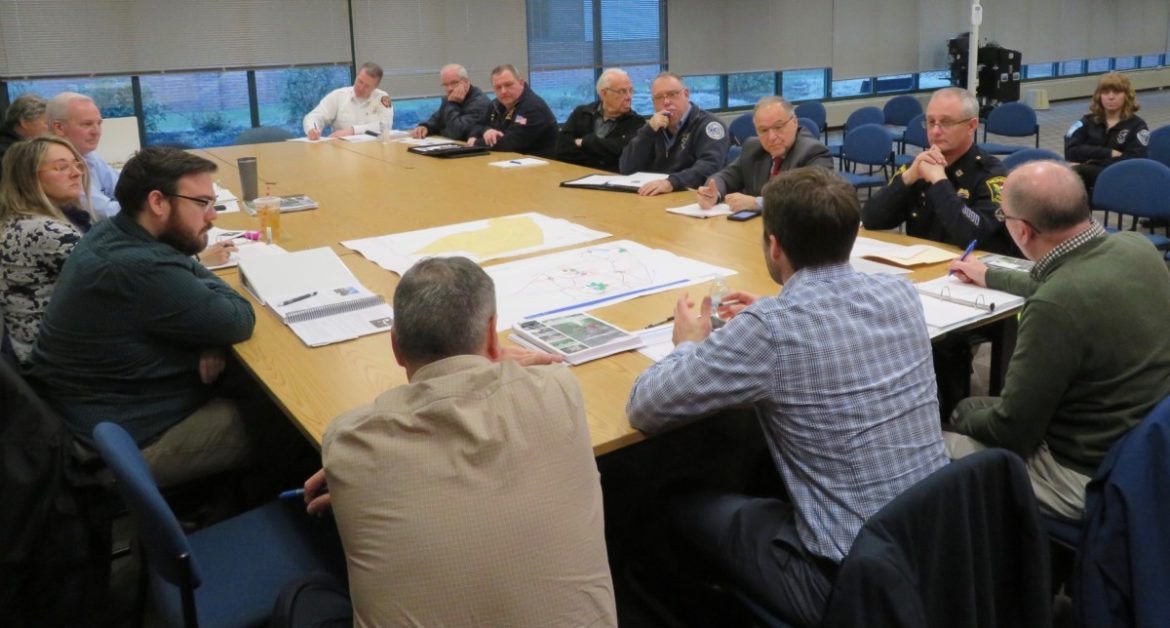 MONROE, Conn. — Monroe is a suburban town of just over 20,000 residents, with three fire companies and an ambulance service driven by volunteers. Though its police force is well equipped to investigate crime, officers have a strong focus on community service.

Emergency services was the topic of a Plan of Conservation and Development Update Focus Group meeting at Masuk High School Thursday.

Francisco Gomes, a project manager and urban designer with Fitzgerald & Halliday, Inc., led a discussion of the town’s strengths and future needs for the POCD update, which must be done every 10 years.

“Emergency Management is stepping up and taking a more active role than 10 years ago,” he said. “But we are homeless.”

York said all of the Community Emergency Response Team’s equipment is not stored in the same place, adding he keeps radios in his living room.

CERT has a small storage facility trailer and a shelter trailer with cots and other supplies at the Monroe Senior Center. Police Captain Keith White, who serves as the deputy emergency management director, said it would be helpful for CERT to have a garage bay for its equipment.

Though the town uses Masuk High School, Jockey Hollow Middle School and the senior center as emergency shelters during major storms with power outages, York said there is no true emergency shelter.

Masuk is the closest thing Monroe has to a long term shelter, but White said the building’s layout does not work and it does not have generators throughout.

During major storms, such as hurricanes, York said no more than 25 residents have needed to use an emergency shelter and none for a long term stay. “The town has become resilient with people buying generators,” he said.

The Monroe Volunteer Emergency Medical Service is a hybrid system comprised of a 24/7 paramedic response, three paid emergency medical technicians and 50 volunteers, most of whom are EMTs.

The department has thee ambulances and a fly car, which is used for a paramedic to  meet an ambulance on the way to the hospital during advanced life support calls.

The town is currently moving forward with plans for a renovation and addition to the EMS facility, housed inside the Jockey Hollow Firehouse at 54 Jockey Hollow Road.

Smith said more space is needed for public training sessions and members don’t want to spend the night in the old facility.

“We have two bunks, but you have to go downstairs and through the bays to shower,” he said.

Over the next 10 years, Smith said EMS must keep up with its vehicle replacement program, upgrade to radios with their own frequency and attract new, younger volunteers.

Gomes asked how much of an issue opioid use is in Monroe.

During the discussion of the police department, White said many services for the mentally ill have closed down due to a lack of funding, causing people to turn to police to handle more situations.

Salvatore said all of his officers take crisis intervention training. “I’m proud to say our officers recognize these as social issues that are noncriminal situations,” he said. “Making an arrest is the last resort.”

Salvatore said officers can often have a calming effect when they are recognized.

Monroe used to pay to train its police officers, only to lose them after they gained experience and left for better paying jobs in other towns.

The chief said Monroe’s detectives can process most scenes and the department is working on getting a crime scene van. “We have one of the best digital forensics officers in the region — and possibly the state,” Salvatore said.

Most of the complaints police receive are about traffic, according to Salvatore. The Monroe Police Department recently acquired a new 3-D laser scanner for accident reconstruction from FARO Technologies Inc., a Florida company.

Among the future needs of the department, according to Salvatore, are carports for police cars, which are equipped with equipment that is sensitive to the elements, and an upgraded animal shelter.

The town is served by three fire districts: Monroe, Stepney and Stevenson.

Fire Marshall Bill Davin said the town has 70 volunteer firefighters and support people — a total of around 150 with junior, senior and lifetime members who no longer respond to calls.

“It’s a challenge recruiting new volunteers,” he said. “We’re working with Easton and Trumbull on a recruiting video.”

Stepney Fire Chief Michael Klemish said training costs for someone with no experience is about $1,200 for a four month class and it costs almost $4,000 to outfit each new member.

Klemish, Davin and Stevenson Deputy Fire Chief Bob Galbraith all agreed an infusion of new volunteers is their biggest need over the next 10 years. If a lack of volunteers ever forced the town to have a paid department, Klemish estimated it would cost taxpayers between $5 million and $6 million a year.

In 2017-18 a fire study was done, which included recommendations. Among them were for the three fire companies to train and buy equipment together, so money can be saved with larger orders, according to Davin.

As far as firefighting goes, Davin said the building materials newer houses are made of are more combustable, so during a response, firefighters have to get out of a structure fire approximately two-to-three minutes sooner.

White mentioned the weight limit of Stevenson Dam on Route 34, which can only allow one fire engine to drive over it at a time, with no other traffic allowed to cross. Police officers have to direct traffic.

York, who is the former fire chief for Stevenson, said it slows the response when fire trucks have to go over the dam.

Salvatore said it can be challenge having two officers direct traffic when they’re on other calls. He said officers from the neighboring town of Oxford can be called in, though it can also be difficult because Oxford is a resident trooper town.

Another topic was the lack of fire hydrants in some parts of town.

Davin said the town has a half dozen cisterns to make up for it and more tankers are called in when needed. Galbraith said there are only 29 hydrants in his part of town, so firefighters sometimes draw water from ponds and streams.