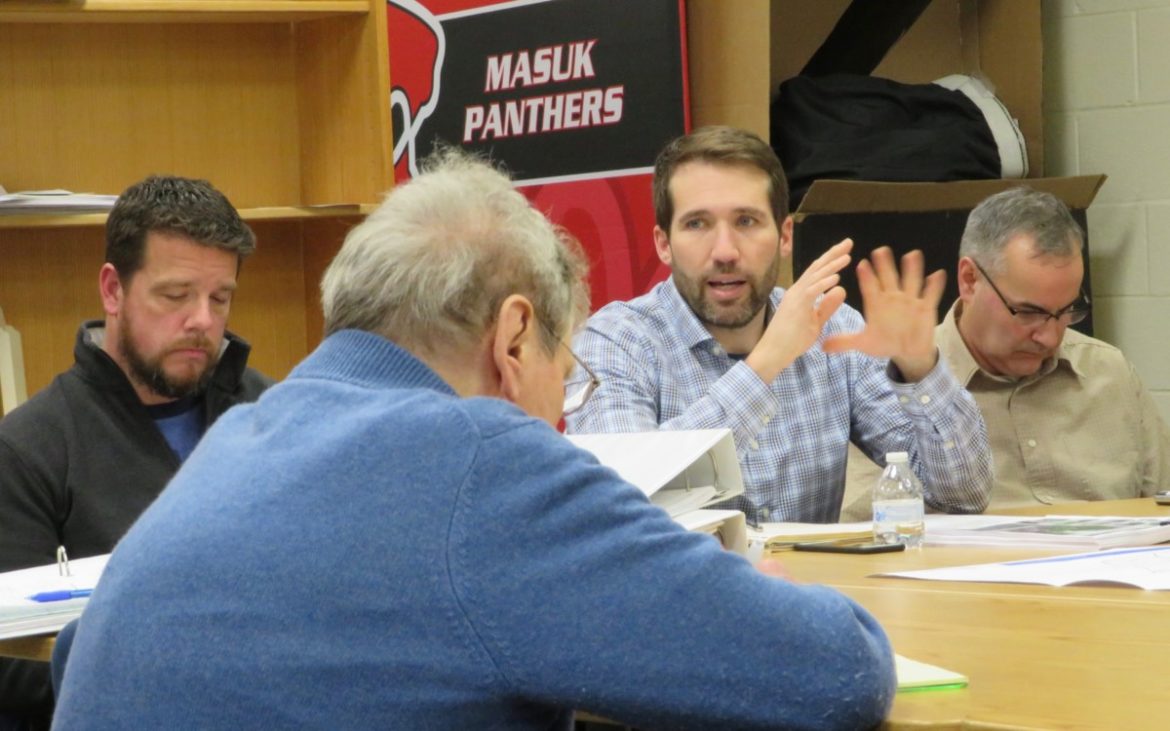 MONROE, Conn. — Can Monroe’s commercial centers be redeveloped to make the town a more desirable place for businesses to move into? Or does the lack of a sewer line make it an impossibility?

These were among the questions discussed at a Plan of Conservation and Development Update Focus Group meeting at the Masuk High School media center last Thursday, when the topic was land use.

John Rosen, chairman of the Architectural Review Board, said he enjoys Monroe’s open spaces and historic buildings, but added, “we have enough strip malls. Our quota for strip malls is fulfilled.”

Francisco Gomes, a project manager and urban designer with Fitzgerald & Halliday, Inc., who is helping the Planning and Zoning Commission with the POCD update, which the state requires every 10 years, asked everyone around the table if development along routes 25, 111 and 34 serves the community well.

“I don’t think there was a lot of long term planning when these strip malls were built,” Planning and Zoning Commission Chairman William Porter said. “We have no connectivity between sites and businesses are crowded to the street, so any widening of the street is difficult.”

When the strip malls were built, the commercial zones were primarily retail, but now the market favors a different mix of uses.

Chris Steiner, whose family owns Village Square shopping center on Route 111, said having a tenant like St. Vincent’s Medical Center is part of the effort to keep their center vibrant.

“It’s not just the standard hardware store anymore,” he said. “It seems to be more personal service items.”

Village Square’s sewer system is under its parking lot, inhibiting growth on the site, according to Steiner.

“Sometimes driving up the main corridors I feel like I’m back in time, because of the age of things,” said Kevin Solli, of Solli Engineering in Monroe. “Maybe there are some redevelopment opportunities.”

Solli said the commercial tax revenue generated along Main Street is not what it could be.

Ray Giovanni, chairman of the Monroe Economic Development Commission and president of the Monroe Chamber of Commerce, said the town should look into grants or some kind of incentives for owners to put money into sprucing up their properties.

“At the same time, you don’t want to put lipstick on a pig,” said Solli, who favors tearing down some of the old buildings to make way for more modern ones.

“At this stage, I’m willing to have the lipstick,” Giovanni said.

Domenic Paniccia, an alternate on the Planning and Zoning Commission, suggested hearing from developers to know what their concerns are.

Zoning Enforcement Officer Joseph Chapman expressed frustration that the town does not always follow through with its legal options to enforce its zoning regulations once letters for violations are exhausted, so some developers do whatever they want.

In communities like Ridgefield and Westport, Porter said you know when you’re downtown, but added Monroe does not have the layout to do the same things.

Porter said he would like see Monroe become a more workable suburb, encouraging outdoor exercise with businesses sharing parking, so people can park once and walk to things.

“While we want to encourage more walking between businesses, we don’t have the infrastructure for it,” he said.

Among Monroe’s strengths, according to Hans Schuumans, a local architect, is its location. “That’s why the hardware stores and others come here,” he said. “Accessibility from a living, working and shopping aspect — that works for Monroe.”

“I look around the table and I see the challenge,” he said. “You want to preserve the rural character of Monroe, but want revenue so the town can maintain itself. To me, what makes sense is it’s market driven. It’s not what you want or what I want. It’s what the market wants.”

Kamedulski encouraged everyone to be open minded to other uses and different types of developments on Main Street and Monroe Turnpike, such as mixed-use with residential and retail.

The Planning and Zoning Commission is looking into allowing mixed-use developments.

In an example of how his commission tries to be flexible, Porter noted how it amended the regulations to allow museums in some parts of town after closing down an illegal one in a residential neighborhood.

Solli said he wants the town to allow multi-family housing.

Town Planner Rick Schultz cautioned that Monroe should be careful to avoid what happened in Southbury, where a developer used the state affordable housing statute to force the town to allow an apartment complex in a residential neighborhood on Roxbury Road.

Gomes turned the conversation to the 8-30g statute and Connecticut’s mandate that 10 percent of every municipality’s housing stock must meet the state definition of affordable housing, as well as the fact Monroe doesn’t have a moratorium in place to protect itself.

William Agresta, the town’s planning and zoning administrator, said, “the state’s definition is off. You have some housing that’s affordable, but it doesn’t count.”

Ronald Bunovsky Sr., a longtime resident, contended Monroe could deny affordable housing applications based on health and safety, because the town doesn’t have the septic capacity.

But Schultz said there are pockets in town where there is enough land to support the septic systems needed for those developments.

“We’re out of land,” he said. “We’re 100-percent built up. We have to figure out how to sustain what we have with our limited septic capability. How do we survive the next 10 years?”