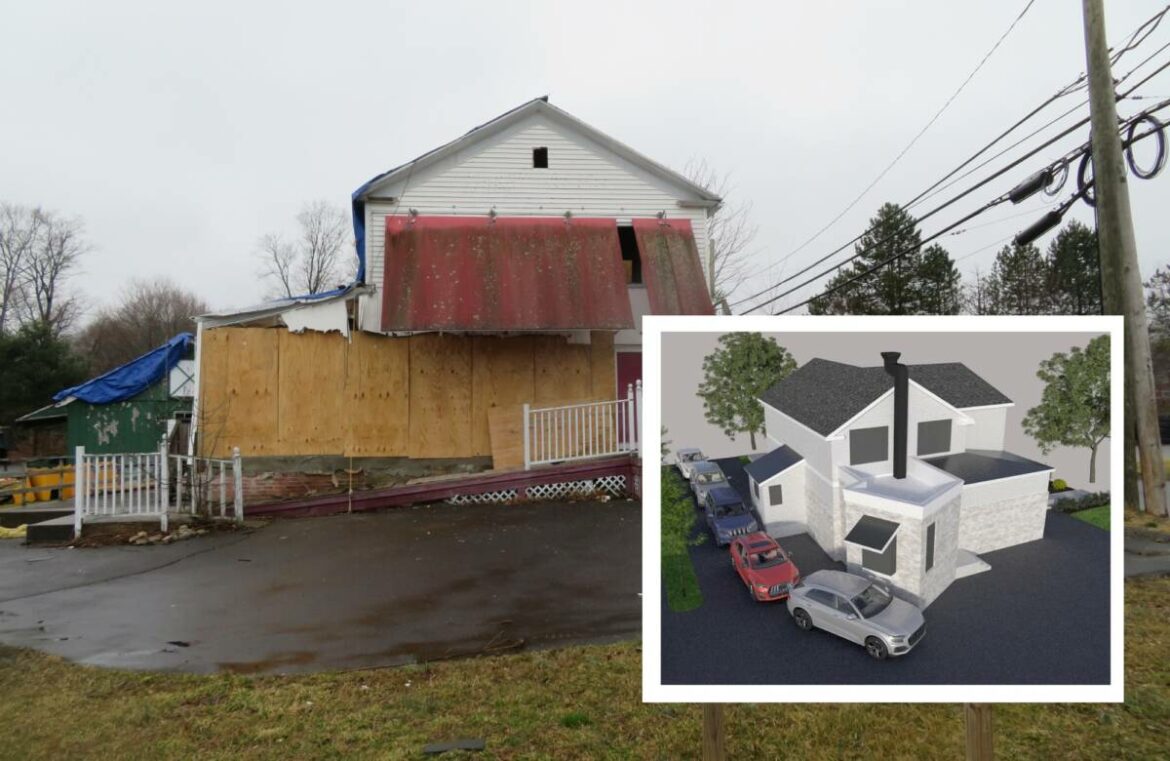 This dilapidated house at the corner of Route 59 and Hattertown Road may be rehabbed and used for a bagel shop and office, inset.

MONROE, CT – A small white clapboard building at the corner of Easton and Hattertown roads served several uses throughout its long history. Though its exact age is unknown, the house appears on the 1856 Clark’s Map of Fairfield County – and the first mention of an owner can be found on the 1867 Beers Atlas Map of Monroe.

It was the house of George S. Coley, according to Kevin Daly of the Monroe Historical Society. Daly said Coley was a Civil War veteran and a boot maker, who was involved in the local church and governance of the village of Upper Stepney.

The house, which can be seen from Main Street at the intersection with Route 59, served as home to several businesses over the years. Longtime residents may remember it as Swanson’s Fish Market. 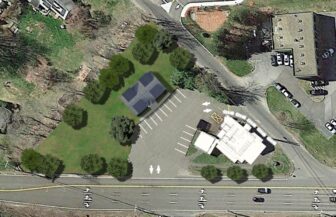 This computer rendering shows the site plan layout of the bagel shop and office proposed for the corner of Route 59 and Hattertown Road.

When the building was empty, Mason’s Farm Market had a seasonal vegetable stand out of a small green accessory building. Then the main building housed Super Duper Weenie, a famous hot dog eatery based in Fairfield.

Clearly Delicious, a gourmet food-to-go shop, moved in after that, but then the property lay dormant.

It has since fallen into disrepair. A red tarp hangs from the front awning, windows are boarded up and its wooden steps are rotting.

Nick Jhilal, an Easton native, who owns Clean Pro Restoration in Orange, wants to breathe new life into the old property. Pending land use approvals, he plans to restore the white building.

Jhilal wants to lease the first floor to a bagel shop and have a drive-thru in the back. The second floor would either be used as an office or an apartment.

The parcel is made up of 9 Hattertown Road and 4 Easton Road. Jhilal bought both for $165,000 each as a member of Clean Pro 1, LLC, according to the transaction on file at Monroe Town Hall. Jhilal said he closed on December 27, 2021.

Checking all the boxes 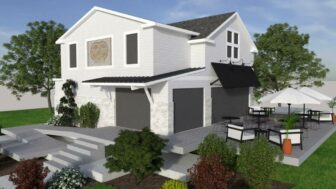 A computer rendering of the bagel shop planned for 4 Easton Road.

First Selectman Ken Kellogg said he, Community and Economic Recovery Coordinator William Holsworth and Town Planner Rick Schultz had been working with a local Realtor to find a new tenant for the old building.

“We’ve always made it clear we wanted to see this redeveloped,” Kellogg said of the dilapidated building. Although it’s taken a long time, it was constantly being pursued.”

The first selectman said the size and shape of the lot, just under one acre, makes it a challenging property to work with. Many opportunities came along and were pursued, but nothing worked out, for one reason or another, Kellogg said during an interview in Holsworth’s office at Town Hall.

“This one checked all the boxes,” Holsworth said of the bagel shop proposal, “and we look forward to bringing the building back to its former glory.”

If everything is approved, Jhilal hopes to complete construction in about 90 days and to open the bagel shop by June 1.

The developer spoke with the Architectural Review Board recently and will come back before the board again with the full architectural plans.

Schultz said Jhilal will submit an application to the Zoning Board of Appeals for a reduction of the setback from the street line for the pre-existing nonconforming building.

He will also need a site plan approval from the Planning and Zoning Commission and a wetlands permit from the Inland Wetlands Commission.

Bagels at the drive-thru 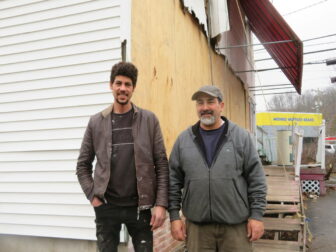 Nick Jhilal walked on the wet grass in front of the Easton Road property on a drizzly Thursday afternoon. “We’re gonna move those poles,” he said of utility poles on the Hattertown side of the site.

He envisions drivers coming in from Main Street, entering the bagel shop from Hattertown Road, going to the back of the building, then around to the drive-thru window for their orders. The one way traffic would take vehicles to an exit onto Easton Road as drivers leave the site.

The brand name bagel shop interested in leasing the first floor is run by “well known local guys” who own four other locations, but Jhilal said they do not want their business to be identified this early in the process.

Jhilal was accompanied by Driss Tena, owner of D&N Construction. The men are embarking on the project together, along with structural engineer is Robert Santangeli. 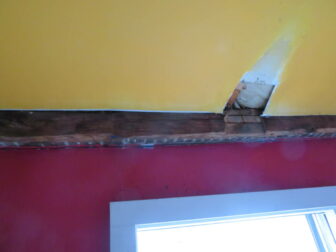 The house at 4 Easton Road dates as far back as 1856 and still has the original wooden beams.

Jhilal said they already gutted the house. Inside, he pointed to the original wood beams that can be seen throughout the building.

A set of stairs on one side of the building leads to the second floor, which once housed an illegal apartment. With Monroe’s more flexible zoning, Jhilal could receive an approval for a legal apartment or use the space for an office.

If the town allows it, Jhilal said he wants to widen the building by 96 square feet, on the Easton Road side.

Jhilal said his wife, Cathy Santangeli, chose the property. “It’s a nice intersection,” he said, adding of the building, “we saw it was empty for so many years, we wanted to invest in the town. Monroe is up and coming.” 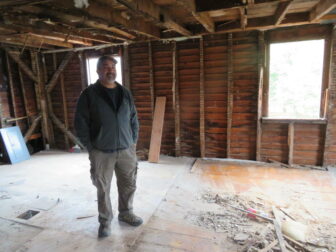 Nick Jhilal, of Easton, stands inside the gutted area on the second floor of the historic house at 4 Easton Road.

The location is right at the intersection of routes 25 and 59, and close to major highways like the Merritt Parkway and Interstate 95. Jhilal said he likes how Monroe’s commercial thoroughfares offer the amenities of a city, while not taking away from the town’s rural character.

He said Clean Pro Restoration and D&N Construction have done jobs at residential, commercial and industrial properties “all over the place”, including North Carolina and New York.

“We do it all. We like projects,” he said. Looking at the old beams inside the little white house in Monroe, Jhilal said, “there is a lot of history in this building. We’ll clean it up and work slowly. In a project like this, you can’t move too fast. These are very delicate beams.”

“We do construction and restoration, but we get satisfaction in taking old buildings and  rehabbing them,” he said, adding with a smile, “we love it.”

Editor’s Note: Joel Leneker, president of the Save Our Stepney Task Force, provided information on the businesses that resided at 4 Easton Road over the years.