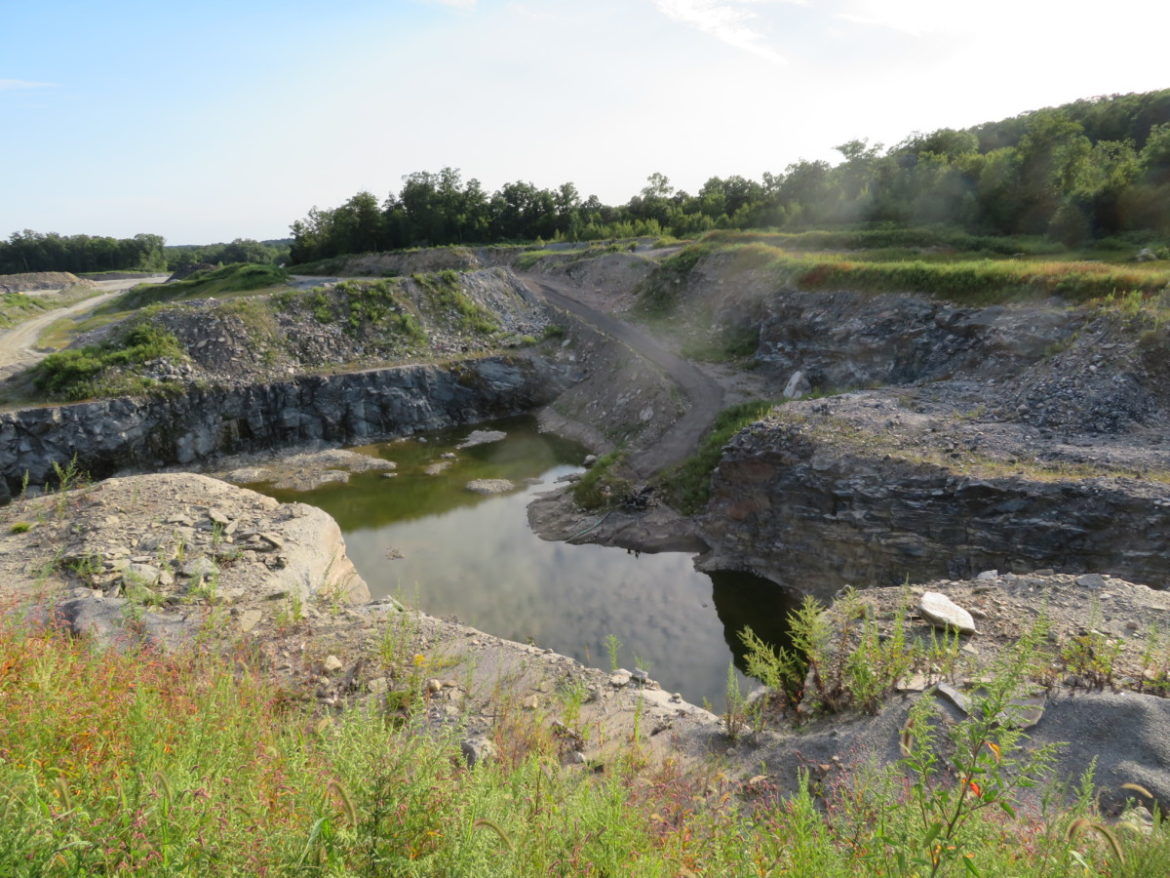 MONROE, CT — A proposal to perform a massive wetlands restoration and build a small office building on two properties in the Pepper Street Business Park underwent scrutiny before the Planning and Zoning and the Inland Wetlands commissions last week.

According to the plan, trucks would bring in 980,000 cubic yards of fill over a 10 year period to prepare the site for development. The materials would fill a big hole left from an illegal graveling operation started by the previous owner. Astro Land Holdings LLC and Spacely Land Holdings LLC, acquired the properties at 64 Cambridge and 4 Independence drives, which total over 72 acres, last year.

Kevin Solli, an engineer with Solli Engineering, touted an improved plan, while making presentations on behalf of his client. Among them, the amount of required fill material was lowered from 1.3 million cubic yards by reducing the proposed height of the elevation on the north portion of the property.

Solli said the intake system protocol proposes to use native material and would ensure that only Connecticut Department of Energy and Environmental Protection approved clean fill would be brought in.

“We are not proposing to bring in any polluted soil,” he said. “That would immediately be rejected from the site. Additional testing will be required before it even comes to the site to ensure it’s not deemed hazardous or would cause any other environmental concern.”

Solli noted how the application has had multiple layers of peer review, including reviews by the Southwest Conservation District and a consultant hired by the Inland Wetlands Commission, Russell Dirienzo, a licensed environmental professional, who is the principal geologist and associate vice president of Arcadis, a Sandy Hook firm.

Dirienzo presented his report to the wetlands commission last week.

Attorney Joel Z. Green represents Peter Metropoulos as trustee to The Thomas C. and Stella Maganas 1988 Family Trust, the owner of 36 Timothy Hill Road, as an intervenor on the application.

Green had showed Google Earth photos to prove how large areas of the site were previously excavated and filled in, and questioned the quality of the materials used as fill.

In his findings, Dirienzo said the intervenor’s focus has been on solid waste issues, but noted that is “solely within the jurisdiction of the Connecticut Department of Energy and Environmental Protection,” not the Inland Wetlands Commission.

“The type of material that may be used to fill the quarry are more in line with the jurisdiction of the Monroe Planning and Zoning Commission,” Dirienzo said.

However, water pooled within the old quarry and, though Dirienzo said he does not think a man-made pond should be considered regulated wetlands, he added the Inland Wetlands Commission could decide that it is wetlands and under its jurisdiction.

“It’s totally up to the commission to decide whether to treat this as a wetland and protect it or allow it to be filled,” Dirienzo said. “There’s no clear court case on it.”

He said the filling of the quarry to the original grade will not have an adverse impact on surrounding inland wetlands and watercourses. 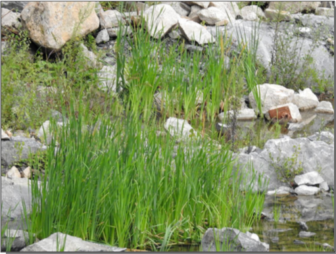 George T. Logan, a soil scientist for the intervenor, had showed photos from the commission’s site walk on Aug. 29, with evidence of wildlife use in the man-made pond, including avians, mammals and invertebrates.

“Why are not the ‘ponds’ that have been created by excavation into the groundwater regime not considered regulated resources as per the Town of Monroe Inland Wetlands and Watercourses Regulations?” Logan asked in a letter to the commission on Aug. 25. “We believe the applicant has conceded that the created pond is regulated …”

Barbara Schellenberg, the commission’s land use attorney, said she will look into whether a man-made pond is considered a regulated wetland.

The applicant’s plan includes restoring the hydrology of Wetland #2, but Dirienzo said he believes it would only have a 30 percent chance of working.

“The plan to hydrate Wetland #2 is a flawed plan because the length of time proposed to fill the quarry to original drainage patterns,” he said. “The pumping of water into the wetland system cannot come close to mimicking nature or rainfall events.”

Dirienzo said the commission could instead approve feasible alternatives:

“The proposal has no guarantees built into the plan and imposes a timeline that is too difficult for any commission to manage and/or regulate,” Dirienzo wrote. “Finally, the application is for approval of a wetland remediation plan, not the actual filling of the quarry. There are much better methods to accomplish the viability of Wetland #2.”

“I’m just saying that I don’t think it’s the best plan that’s out there,” he explained. “I think if we could do this in a year, maybe that would be good. But in 10 years, I don’t see this working very well.”

“We still believe that our plan is the best plan and we think this will actually pack the most punch in achieving the goals of restoring Vernal Pool 2 and Wetland 2,” Solli said.

But if the commission has concerns over the length of time it would take to complete, Solli said his client would be willing to consider Dirienzo’s alternatives, though he added their 10-year-plan is the preferable one.

Dirienzo said the applicant provided manifests showing materials that came on the site at that time were clean or natural fill.

“I don’t see that there’s any evidence that contaminated or polluted fill has been discharged on the site,” he told the commission. “Therefore, I don’t think you should press it anymore.”

He said demolition debris from Stratford High School is on the site, but sitting in the middle of a pile outside of the wetlands.

Dirienzo said he asked why the agency is not concerned about Stratford High School demolition debris being brought to an illegal gravel mine in Monroe.

“‘Oh, we didn’t see demolition debris,'” he said DEEP told him, adding there was snow on the ground when the agency inspected the property 10 months ago. “I can guarantee you that … if the intervenor would stop wasting the Inland Wetlands Commission’s time with DEEP issues and go to DEEP, I think DEEP will get involved.”

After Solli presented the updated plan to the Planning and Zoning Commission last Thursday, Chairman Michael O’Reilly said, “thank you Mr. Solli. That was very informative and an improvement, I would have to say.”

But Leon Ambrosey, a commissioner, wanted answers to several questions before moving forward on reviewing the proposal.

Ambrosey questioned whether the applicant ever had permission to bring fill materials onto the site. He also wants to know the depth of holes in areas that were previously filled to calculate how much material was brought in already.

“To that point, we don’t even know what’s in these holes,” he said.

Solli said an analysis was done on the surface and they bore holes to test soil. Ambrosey asked how deep the borings were.

“It’s all clean,” Solli said. “The updated report was just completed. I will provide it right after this meeting. All it does is further reinforce the site is clean.”

While referring the corruption scandal in Fairfield, Ambrosey said clean fill was supposed to be going into the public works yard in there, but contaminated fill was brought in. He said the commission just wants to make sure something similar to that does not happen in Monroe by having safeguards in effect, no matter who owns the property.

“This is not like a normal application,” he said. “This is to address violations. That’s what this commission is here to handle. You’re saying you had authorization to bring fill into this site. I don’t see it. That’s a concern for this commission. We don’t know what’s in that hole.”

“We did testing and have manifests,” said Arnold Karp, managing partner of the two LLCs. “So to go back in history … while there has been over-excavation, we are 100 percent sure everything there is clean. We’re going down a rabbit hole to discuss what may or may not be there. What is there is clean fill.”

Solli said there is construction debris that meets the DEEP definition of clean fill and it would be processed with any metals removed. He also said no asphalt will be used as fill.

Ambrosey expressed concern that approving the plan could allow a 10-year rock crushing operation. Solli said it would be an earthwork and filling operation.

“Will you have a crusher on the property?” Ambrosey asked.

His question was not answered.

Something that works for everyone

The intervenor’s experts are awaiting additional test results before giving a presentation on the fill, according to Green. However, he did express support for a wetlands remediation that’s faster than 10 years.

During last week’s wetlands hearing, Karp said the bottom line is to correct the wetlands violation, then bring the property to a standard where it can be developed. He also expressed a willingness to look into alternatives given by Dirienzo.

“The one thing I know is: I can’t replace history,” Karp said. “We can try to do our best job with the knowledge we have. You can study this thing to death and not move anything forward or we can come up with a bunch of concrete ideas, put them on paper and see how they work.”