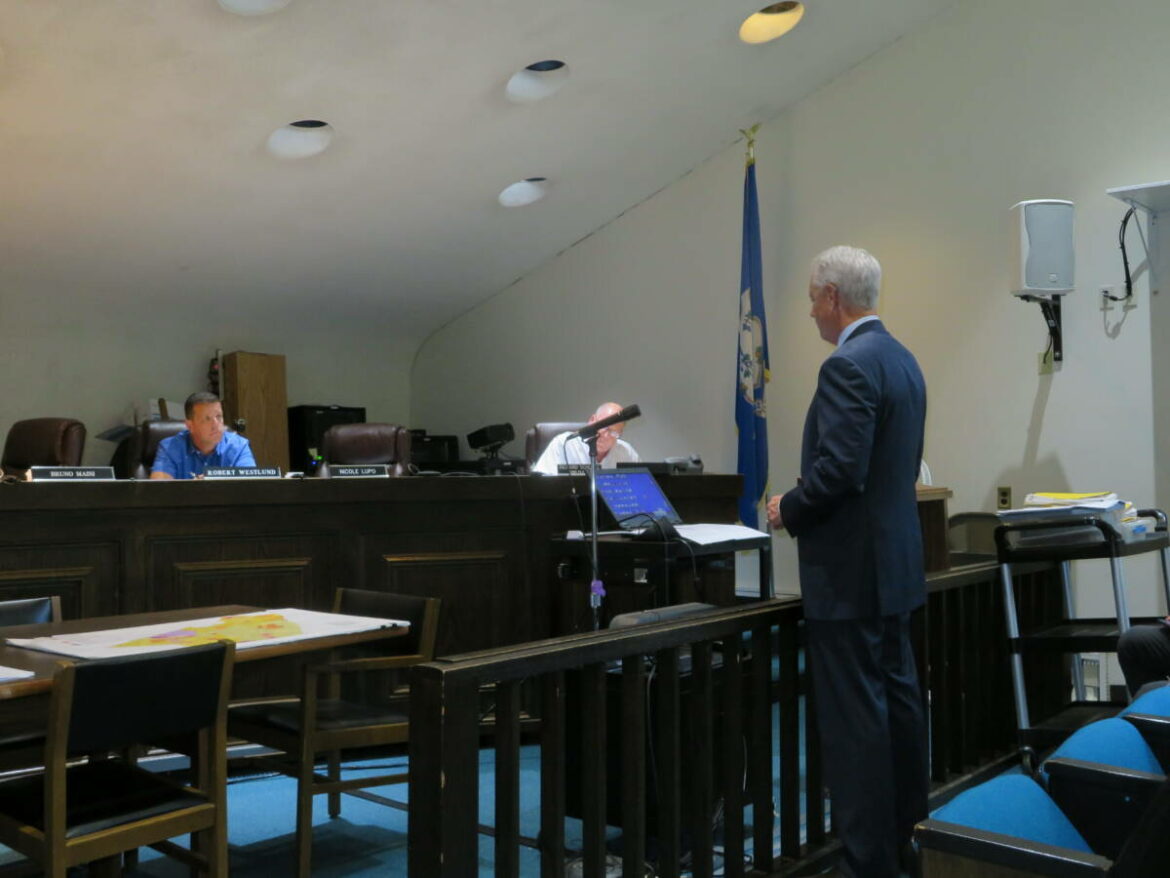 Attorney John Knuff presents a plan to reduce the size of the building for a commercial delivery van facility at 10 Victoria Drive from 10,000 to 7,500 square feet during a Planning and Zoning Commission hearing Thursday.

MONROE, CT — The developer for a delivery van facility at 10 Victoria Drive proposed a smaller building than the 10,000-square-foot facility that was approved after Planning and Zoning Commission members pushed back against a request to scrap the building all together.

But that pitch also fell flat, so the developer withdrew the plan for the smaller building, while agreeing to stick with the approved application … for now.

John Knuff, the attorney for the applicant, conferred with his client, property owner Phil DiGennaro, at Thursday’s meeting, before telling the commission they would continue with the approved plan, but said they would come back if they have something “more palatable”.

The delivery van facility, believed to be for Amazon though the applicant will not say who the tenant is, was approved on April 22. Aside from the parking lot, there would be a gatehouse and the 10,000-square-foot building.

But Knuff said the business is always fine tuning its process for efficiency and later found it would be better for some functions to be done at the facility in Trumbull, rather than out of the 10,000-square-foot building in Monroe — eliminating the need for it.

However, several commissioners contended they did not want to have one big parking lot. So on Thursday, Christopher Gagnon, the project’s engineer, presented a proposal to reduce the building to 7,500 square feet, while doubling the size of an above ground detention pond.

Gagnon said they could also replace retaining walls with a rock cut, making for a “much more sustainable development in the long run.”

Commissioner Leon Ambrosey noted the building was just a steel building with a garage door and a single door.

“This is just a generic small building you’re throwing up here,” Ambrosey said. “What happens when the vans go out? It’s just an empty parking lot.”

Knuff said the 10,000 square foot building was initially proposed because it reflected what they understood the needs of their client to be at the time. But he said these are new facilities that are constantly evolving.

He said the delivery van use will be on the property for a long time. “We’re simply trying to meet the needs of our tenant, while maximizing the tax revenue for the town,” Knuff said.

“I have an issue with this,” said Vice Chairman Bruno Maini. “This property, it’s a gateway to our town. The last thing I would ever approve for the town is a parking lot. The 10,000 square foot building was too small for the property to start with. Then to reduce it … that’s not acceptable to me for a gateway property.”

“I do believe the site is disproportionately designed,” Commissioner Robert Westlund said. “I’m more comfortable with the 10,000 square foot building.” He added the building would hold its tax value, while the vans could drive away.

Knuff has said the vast majority of the tax revenue would come from the vans. He also noted the town’s regulations for a commercial vehicle facility do not require a building.

“We respectfully ask you to consider this proposal,” he said.

“I have no problem with you going from a small building to a smaller building,” Chairman Michael O’Reilly said.

“I totally understand what you’re saying,” DiGennaro told the commission. He said these delivery facilities started in 2016 and change all the time. “This is the largest company in the world. They know how to operate their properties better than anybody,” he said. “Nothing against you. They are for efficiency. I would respectfully ask you all to reconsider.”

“I’m in favor of this application, but I’m not sure you have the votes,” O’Reilly said.

When members of the public had a chance to speak, John DeLoge, who lives on Hickory Lane, expressed concern over blasting that was done to prepare the site and how it is affecting his house.

Knuff said all of the blasting was recently completed.

Lois Spence, the vice chair of the Inland Wetlands Commission, speaking as a private citizen, said Amazon is always changing and could move on to drones, so the facility does not make sense to her from a tax standpoint.

Spence also said if the commission allows the developer to modify the approval to eliminate the building that could set a precedent with other applicants saying, “Well you did it for them. You can do it for me.”