MONROE, CT — Men are stepping up to make a stand against domestic and sexual violence by participating in The Center for Family Justice’s virtual Walk a Mile in Her Shoes event Thursday.

“Every year we usually congregate at the Fairfield Train Station and we kick off with anywhere from 1,000 to 1,500 individuals — a lot of college campus students, high school kids, families, people of all ages, people with their children, people walking their dogs and, most importantly, a lot of great men and young boys that stand up against violence against women and girls,” said Debra A. Greenwood, president and CEO of CFJ. “This is all led by the efforts of our White Ribbon Campaign.”

Greenwood spoke in a video about this year’s Walk that CFJ posted on Vimeo.

She said Gary MacNamara, a retired Fairfield police chief, serves as honorary chairman of the White Ribbon Campaign, which has anywhere from 30-to-40 men who sit on its committee, which works with The Center for Family Justice throughout the year.

Walk a Mile in Her Shoes is a National effort that started many years ago, according to Greenwood, adding it was a fun way for men to wear red high heels and walk down the Post Road in Fairfield, while coming together in solidarity against abuse.

This year, because of social distancing with COVID-19, the event is being held virtually throughout the month of April, which is Sexual Assault Awareness Month and Child Abuse Awareness Month.

Between April 1 and this Thursday, participants have been taking pictures or videos of of themselves walking in support of CFJ and sharing it on social media using the hashtag #WeStillWalkforCFJ. Photos can be sent to CFJ at [email protected]

In a Facebook post, Greenwood suggests wearing “the Walk a Mile in Her Shoes symbol of red shoes or the color teal, the official color of sexual violence awareness, to show you care.”

CFJ, located at 753 Fairfield Ave. in Bridgeport, assists victims and leads prevention efforts against sexual assault, domestic violence and child abuse. To make a donation to the center, click on this link. 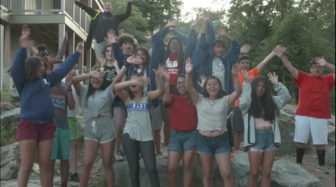 Children from Camp HOPE are featured in The Center for Family Justice’s promotional video for the 2020 Walk a Mile in Her Shoes.

This year is the eighth annual Walk. The event is sponsored by Aquarion Water Co. and proceeds will benefit benefit CFJ’s Camp HOPE America-Bridgeport, a therapeutic summer camp and mentoring program for youth impacted by domestic and sexual violence.

Abuse statistics show there is a long way to go to solve the problem.

“Ninety-Percent of perpetrators of sexual violence and domestic violence are men and boys,” said MacNamara, now executive director of public safety and government affairs at Sacred Heart University. “Those statistics are harsh. While the majority of offenders may be men, we know that the majority, the overwhelming majority of men and boys are not offenders — and that’s kind of why we created the White Ribbon Campaign in the first place.”

“If we can engage men and boys to begin to talk about this issue,” he continued, “talk about violence and sexual assault against women, learn about it, share how inappropriate it is, share how bad it is, it’s illegal, it’s destructive, we’re going to engage them in a conversation and hopefully change that culture and get that statistic even lower.”