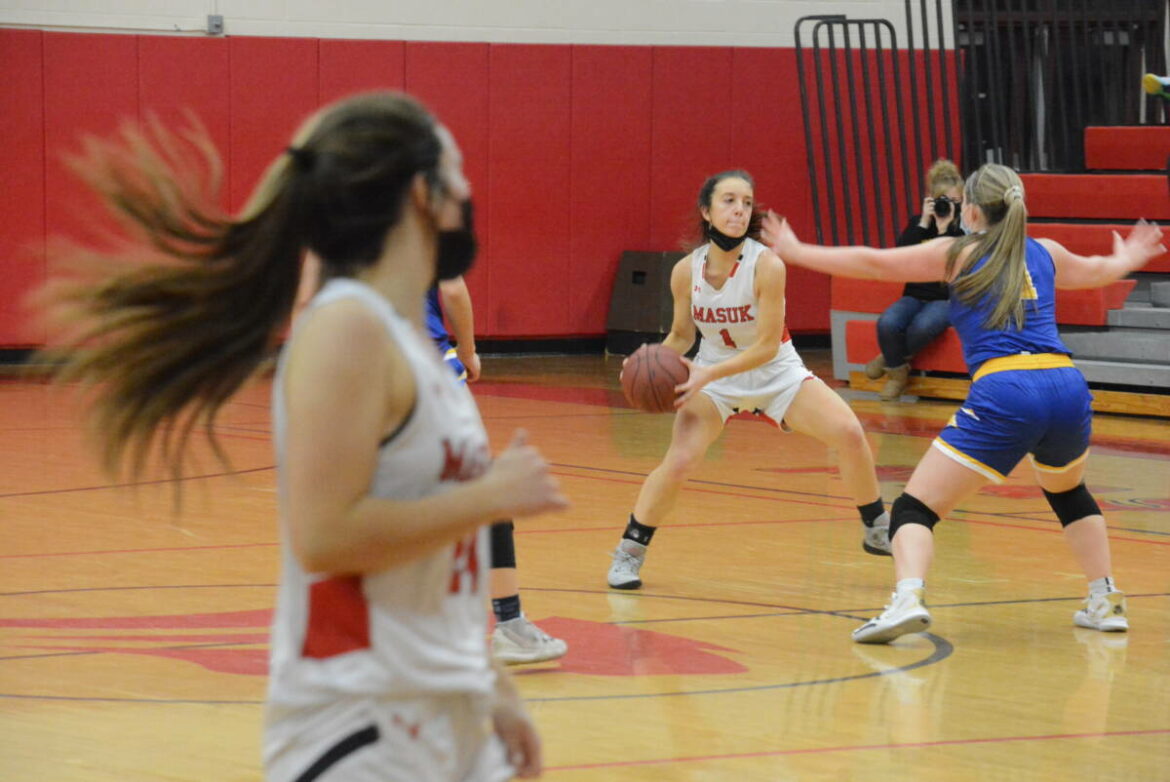 Masuk Panther Alannah Tremalio passes the ball to a teammate in a game against Brookfield.

MONROE, CT — Trailing by 13 points early in the fourth quarter and down 11 with less than two minutes to play, Masuk High’s girls’ basketball team didn’t give up in a clash with visiting Brookfield on Thursday. In the end, the Bobcats held off the Masuk Panthers for a 45-42 win. Two nights later, visiting Bethel got past the Panthers in a tight battle, 34-33.

Masuk Coach Scott Corchard was pleased with his squad’s effort in both games. 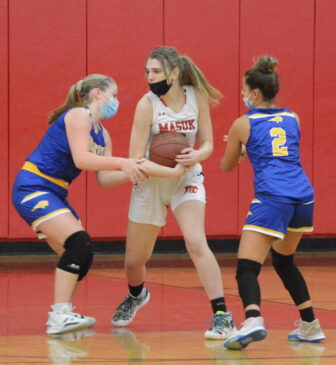 Sophie Gustinis of Masuk battles two Brookfield defenders for possession of the basketball in a home game Thursday.

Masuk fell behind 16-7 before twice pulling to within two points, and trailed 21-17 at halftime.

In the third quarter, Masuk again got to within two on a Natalie Lieto basket and it was 23-21 with 5:35 to go in the stanza. The Bobcats took momentary control and led 35-24 heading to the fourth. It was 37-24 early in the final period before the Panthers chipped away.

A pair of baskets by Hannah Fagan sandwiched a baseline drive for two points by Sofia Lieto to bring Masuk to within seven. A free throw by Maia Ventresca got the deficit down to six at 37-31 with 5:17 to go.

Brookfield responded and went up 13 before a furious Masuk rally. Natalie Lieto scored on a layup and Sofia Lieto’s putback made it 44-35 with 1:37 remaining. The Panthers forced a turnover and Sofia Lieto cashed in with a 3-point play. It was 44-38 with 41 seconds left.

Masuk fouled; Brookfield couldn’t close things out at the foul line. Fagan’s putback made the score 44-40 with 20 seconds to go. After a Brookfield free throw, Fagan scored in close to make it a three-point game as the seconds ticked away, but Masuk ran out of time. 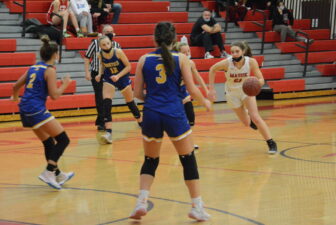 Masuk Panther Hannah Fagan races down the court in a home game against Brookfield Thursday.

“Defense was good. We made stops,” said Corchard, adding that the Panthers just needed to make a few more baskets in this one.

Fagan had 15 points, Natalie Lieto scored 11 points, Sofia Lieto had seven — all in the final quarter — and Ventresca had six.