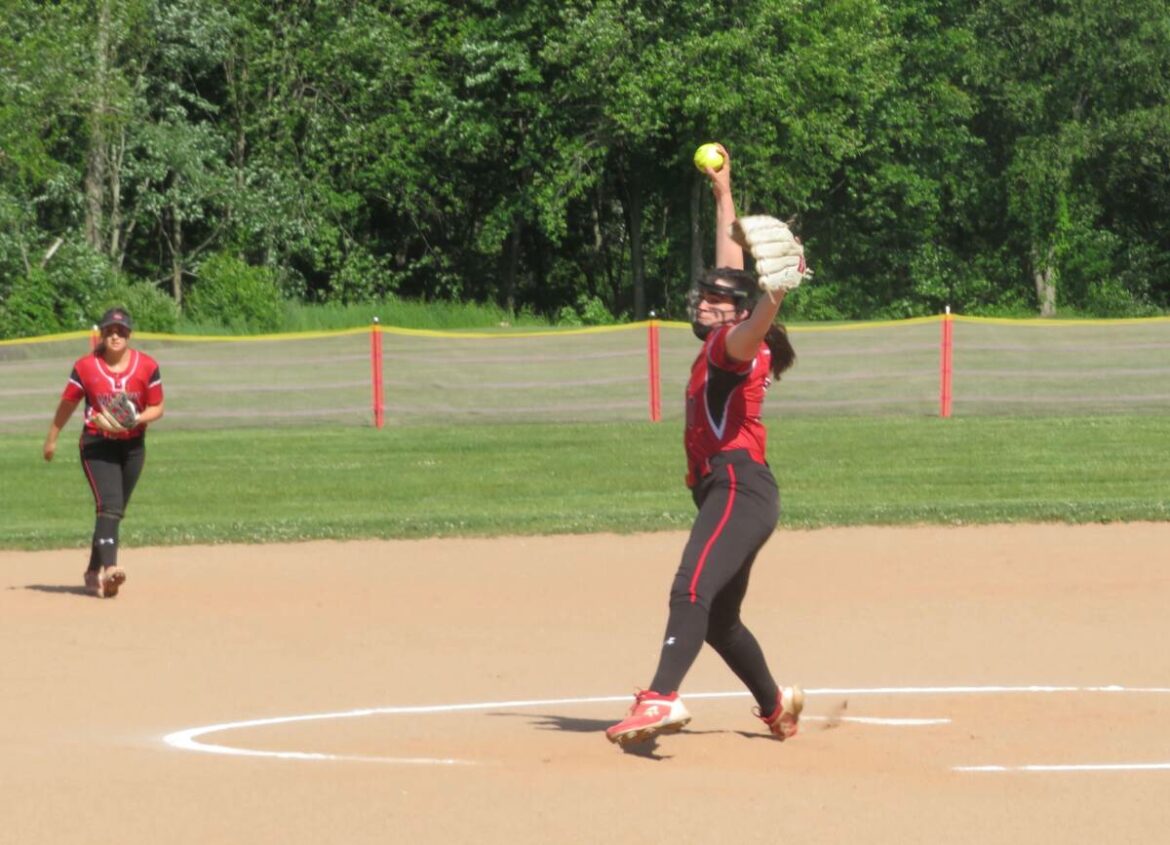 Kathryn Gallant winds up for a pitch in the first inning, at the start of her no-hitter in Masuk's 8-0 playoff win over Pomeraug at home Tuesday.

MONROE, CT —Kathryn Gallant threw a no-hitter in a home semifinal playoff game against Pomperaug High School Tuesday, leading the Panthers to an 8-0 victory and a trip to the SWC championship game.

The undefeated Panthers will face Notre Dame of Fairfield in the final, following Notre Dame’s 3-1 triumph over Newtown. The game is scheduled for 7 p.m. on Thursday, May 27, at DeLuca Field in Stratford. 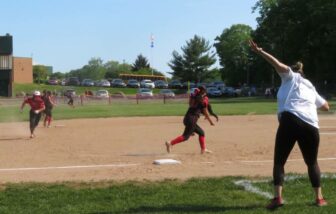 In their game, the Panthers jumped out to an early lead, when Kaitlyn Welch hit a double and Gallant cracked a single, driving Welch home in the first inning to go up 1-0. But Pomperaug pitcher Kaylie Costa kept her team in the game until the bottom of the third.

“It took a while for us to adjust to the pitching,” Masuk Coach Leigh Barone said. “We were swinging at some of the low balls she was throwing. Then we got patient, got some walks and made contact.”

Welch showed patience at the plate, drawing a walk with one out in the third, to spark a five-run inning.

Sarah Falcone and Gallant hit a pair of singles to load the bases. Then with two outs, Emma West-Testo walked, to bring Welch home for a 2-0 lead. 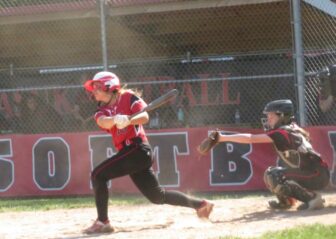 Kaitlyn Welch of the Masuk Panthers went 2 for 3 at the plate with a walk, a double and a single. She scored three runs in Masuk’s 8-0 semifinals win over Pomperaug.

Costa settled down to pitch two shutout innings, before Masuk scored two more runs in the bottom of the sixth. Welch singled and Gallant hit a double. Jacie Hall drove Welch in with a single and Gallant scored on a single by West-Testo to make it 8-0.

Masuk, which is 19-0 counting its two playoff wins, exploded for a total of 11 hits in the game.

Dominance on the mound

Gallant had dominated Pomperaug batters in a 9-0 win on May 17, overpowering them with 19 strikeouts, so Barone said the visitors tried a different strategy on Tuesday.

“Their approach was to choke up at the plate and let Kat’s velocity provide the hits,” Barone said. “Our infield had to be ready. They made more contact this time.”

In the fourth inning, Hall slid to her knees to scoop up a grounder and throw the runner out.

In the sixth inning, Pomperaug’s Skyler Hughes hit a ground ball so hard, it looked like it would shoot through the infield, before Hall made a diving stop, got to her feet and threw Hughes out at first.

Center fielder Natalie Lieto also had a defensive gem, sprinting toward right field to snag a fly ball for the final out.

Barone said Hall has a consistent glove at second base and Lieto is fast, sees the ball go off the bat and runs toward it without hesitation.

Gallant walked the first batter she faced Tuesday, before going on to shutdown

Pomperaug’s offense the rest of the way. The junior, who had 12 strikeouts in all, 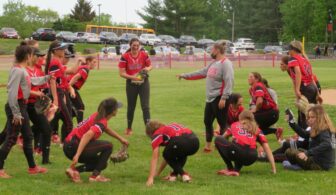 struck out the side in the top of the seventh to close the door for good.

“She’s got a lot of no-hitters,” Barone said of Gallant. “She’s been pitching really well. She’s focused during games, and when someone’s on base, she doesn’t get rattled on the mound. She’s mentally tough.”