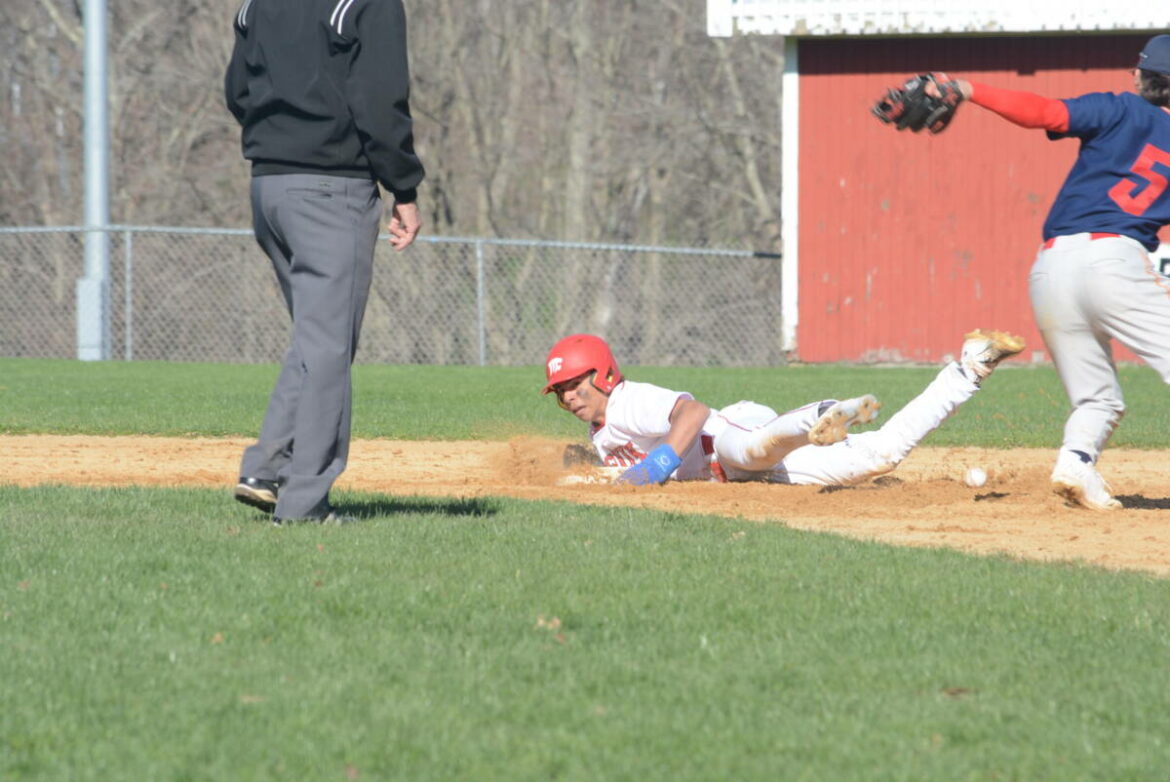 Allan Perez steals second for the Panthers in a game against Stratford. Masuk's baseball team is 8-5 this season.

The Panthers followed up a 9-2 win over New Milford on April 27 with a 9-8 edging of host Bethel on April 29, then beat visiting Bunnell 7-5 Tuesday to improve to 8-5 overall.

Against Bunnell, Justin Feinstein struck out 14 batters in six innings, walked one and allowed five hits. Colin Jarnutowski and Kaige Garrity also pitched in relief with Garrity picking up the save. Catcher Andrew LaBella was behind the plate during the win.

At the plate, Masuk capitalized on five hits and four Bunnell errors to overcome an early 3-0 deficit. Allan Perez had two singles, an RBI and run scored, and Ryan Fedeli delivered an RBI single.

In the win over Bethel, Masuk trailed 7-5, before coming back with four runs in the top of the seventh and hanging on.

Perez and Fedeli started off the inning with singles. Kaige Garrity then hit an RBI single to bring the score to 7-6. Brandon Francisco’s RBI single tied the game at 7-7 and then Max Pizzolato drove in the go-ahead runs with a two-run single.

Garrity closed the game out pitching the bottom of the seventh. He struck out the last batter looking with the tying and go-ahead runs on second and third.

Allan Perez also had an RBI triple in the third and Greg Nivison hit an RBI single in the third. Pizzolato had three hits in the game.

The game was back and forth. Bethel led 1-0 after one inning, Masuk went up 3-1 in the top of the third only to see Bethel go up 4-3 in the bottom of the frame. Masuk answered with two runs in the fourth for a 5-4 lead. Bethel went ahead 7-5 in the fifth, setting the stage for Masuk’s final-inning rally.

The Panthers are home Saturday to take on Glastonbury at 9:30 a.m.