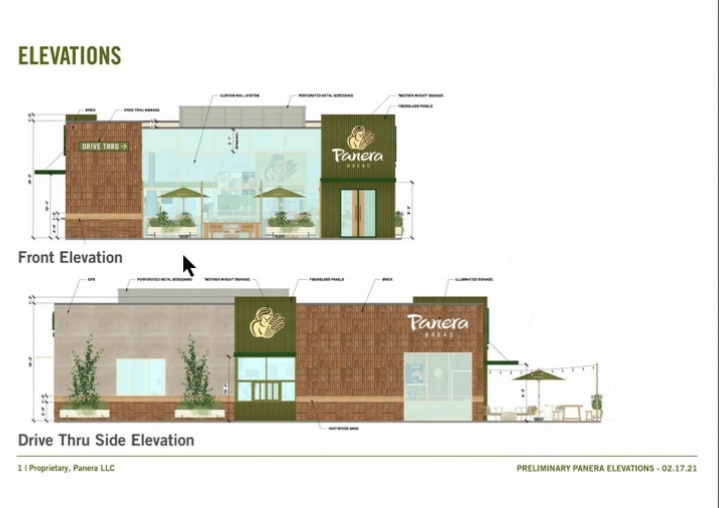 This is a rendering of the new Panera Bread Café that will be built at 205 Monroe Turnpike.

MONROE, CT — Customers of a new, next generation Panera Bread Café to be built at 205 Monroe Turnpike will be able to save time at the drive-thru by ordering through an app, then getting their food and beverages at a separate, rapid order pickup window.

A modification to the approved plan will also reduce the building from 4,950 to 3,482 square feet. The Planning and Zoning Commission gave a green light to the changes Thursday night and now construction can begin.

“We’re very excited to be here tonight to get final approvals for this proposed development,” Kevin Solli, founder and principal of Solli Engineering, told the commission during a hearing Thursday night. “We’re just very excited and anxious to have this built in Monroe. Depending on how things go, the developer is ready to apply for the building permit as early as tomorrow.”

The restaurant will have two dual order lanes, which merge to one lane behind the building. Panera is redesigning all of its restaurants to be standalone facilities. Monroe’s location will be the second Panera Café to open in the nation. The first was in St. Louis, Mo.

Plans for the restaurant stalled last summer, when Panera Bread paused construction of new locations amid the COVID-19 pandemic. Then First Selectman Ken Kellogg announced the restaurant chain signed a deal with the developer this summer and plans were moving forward again.

On Thursday, the commission unanimously approved the permit modification with conditions that Town Engineer Scott Schatzlein’s recommendations be followed, with the exception of adding a guide-rail on the south side of the parking area.

Among other recommendations Schatzlein made that will be followed are for a painted crosswalk along the main entrance driveway and an emergency bypass lane for the drive-thru on the easterly side of the building.

In a written response agreeing to the latter condition, Solli also said “an additional ‘Rapid Order Pick-Up Speaker’ is provided for patrons who have already placed an order to let the store know they are there to pick up their order. An outlet/bypass is provided to ensure other patrons can navigate around any cars at that speaker.” 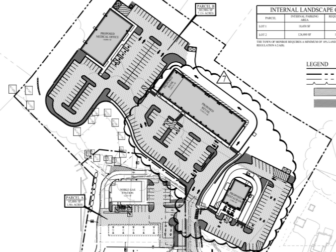 The plans for Towne Line Plaza.

The Panera Bread will be built across from the Noble gas station on either side of the driveway for Towne Line Plaza, which is close to the Trumbull town line. A conceptual plan for the plaza also calls for the construction of a 17,625-square-foot mixed-retail building and a medical office of approximately 10,000 square-feet.

During a public comment portion of the hearing, Darlene Musial of Captains Hill Road said, “I want to voice my opinion that I believe Panera is exactly what this town can use — not another bank, pharmacy, liquor store, gas station or nail salon.”

While Musial said those businesses render beneficial services in the community, she said Monroe needs another place for small gatherings among friends.

Frank DiPietro Jr. of Spring Hill Road said his backyard bordered a quiet, peaceful wooded area behind his home, until the Noble gas station was built two years ago. In addition to noise throughout the night, DiPietro said lights shine onto his property.

Over the last two years, he said his taxes increased by $2,000 and he wondered if he could have some kind of tax break for the inconvenience of the development near his home.

Chairman Michael O’Reilly said the commission could not address a tax break, but could look at the landscape buffer of the plan.

The applicant said they are providing additional plantings, buffer and screenings and Town Planner Rick Schultz said Noble gas has been cooperative, while working with staff on a solution for the lighting.

A letter from the Monroe Conservation & Water Resources Commission expressed concern that the landscaping plan includes 35 percent non-native plants and said two of them, Pyrus calleryana “Aristocrat Pear” (Callery Pear) and Miscanthus sinensis (Maiden Grass) are considered to be invasive in several other states.

The letter closed, “we respectfully request that the owner adjust their plans to use native plant materials for any plantings.”

The applicant said a mix with some non-native plants can have benefits, such as making the ground cover more drought resistant, and that the proposed locations and maintenance of the non-natives would prevent the two plants cited in the letter from becoming invasive.

Planning and Zoning Commissioners did not see any reasons for concern and most commissioners had no further questions about the application.

“I’m okay with it,” said Ryan Condon, the commission secretary. “I think it’s a good addition to the town.”