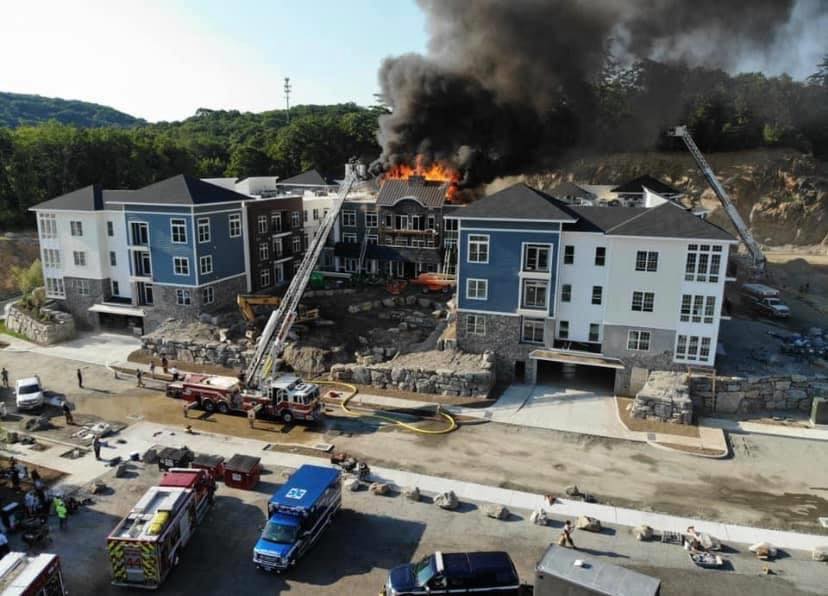 OXFORD, CT — Town firefighters assisted in battling a blaze at The Residences, a four-story apartment building under construction at Quarry Walk on Route 67, Monday afternoon.

An engine from Stevenson Volunteer Fire Department, which also carried three firefighters from the Monroe fire company, contributed to a multi-town response after being called in at 5:21 p.m.

“They went into the building, onto the third floor, and did some fire suppression,” Stevenson Fire Chief John Howe said Tuesday. 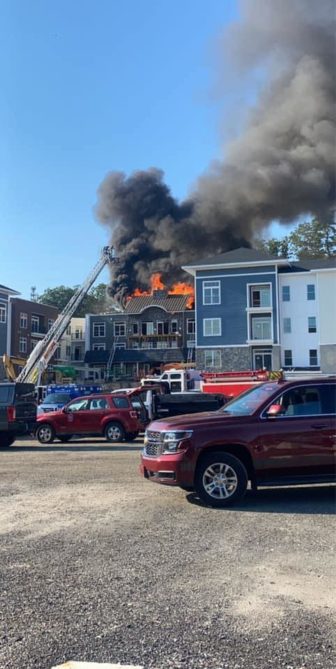 The Oxford Fire Department received the initial call at 3:25 p.m. Its firefighters entered the building, before getting “knocked from the interior when they were met with heavy fire from the roof and ‘open loft area’ of the building,” according to the fire company’s Facebook page.

In addition to Stevenson and Monroe, Oxford was assisted by firefighters from Beacon Falls, Seymour, Southbury and Middlebury, as well as the Ansonia Emergency Medical Service. Oxford also received station coverage from Roxbury EMS, Seymour and Middlebury.

“We want to thank all of our mutual aid departments, and a job well done in the extreme weather conditions,” Oxford firefighters said on their Facebook page.

Oxford Fire Marshal Scott Pelletier is still investigating the cause of the fire.

Howe said he heard Oxford was able to respond quickly to the call.

“I heard that they knew about it fairly soon,” he said. “A tree company working on top of the hill could see it. They were working with a drone, taking pictures right from the beginning.”

Howe was out of town when Stevenson was called in, so he arrived later. “There was still smoke and steam,” he recalled. “Ladder trucks were spraying water from three sides. A lot of firefighters were there.”

Howe brought three exterior guys with him, including two junior firefighters, between age 14 and 18, and another senior firefighter who does not yet have Fire One training. While exterior crew members cannot go into a building, they can assist on tasks such as bringing water and tools to those who need it, according to Howe.

“At the end of the night, we picked up hoses,” he said.

The Stevenson and Monroe firefighters, who arrived earlier and fought the fire with other towns, did so under harsh conditions, wearing heavy equipment in extreme summer heat. 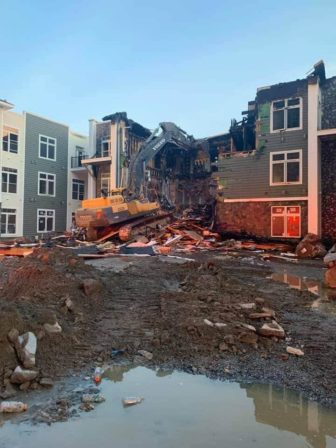 Oxford Fire Marshal Scott Pelletier is still investigating the cause of the fire. Oxford Fire-Rescue photo

“The challenge was the heat and humidity,” Howe said. “Our guys went in and did what they had to do, then were brought out to a rehab area.”

Firefighters in the rehab area were given water and had their vital signs checked.

“One guy was sitting in, what I call a soccer mom chair,” Howe said. “It has two arm rests like pockets, you put ice and water there to cool down your body.”

“They did their part to help out,” he said. “They worked hard and they did an excellent job in very trying conditions.”