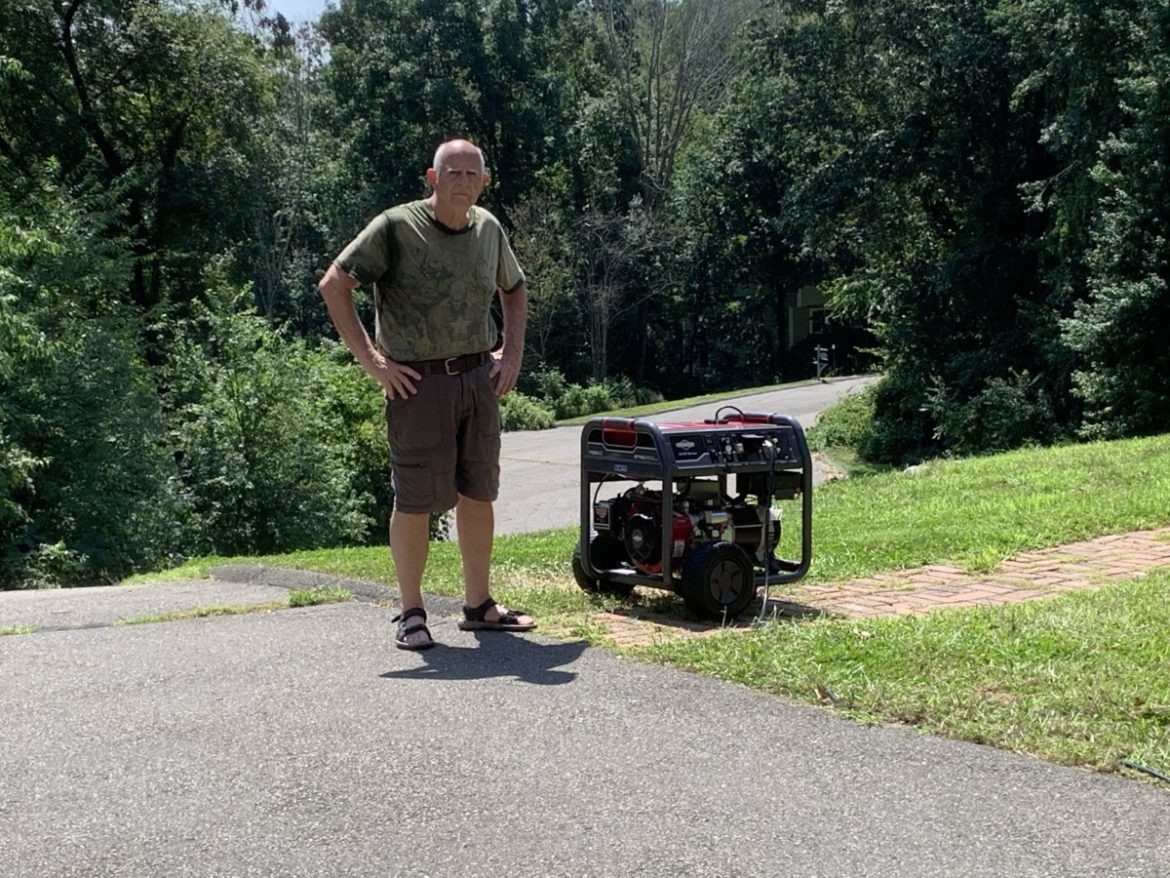 Dan Banks recently refilled the tank of his generator, as he and his wife Sandy continue to wait for power to be restored at their Brushy Court home.

MONROE, CT — Sandy and Dan Banks are among the less-than-one percent of Eversource’s Monroe customers still waiting for power Wednesday, the eighth day after Tropical Storm Isaias slammed the region with strong winds and heavy rain.

Sandy Banks said it was the longest power outage she and her husband have had since moving into their Brushy Court home 42 years ago.

“I never felt like I was going to be the bottom of the barrel, as far as getting relief,” she said Wednesday afternoon. “Other people have gone through it before, but when it’s you, all of a sudden it’s a whole new ballgame.”

“As far as I know, our street is out, Kimberly Drive and some homes on Wells Road,” Banks said. “Our utilities are underground. We talked to a lineman, who told us the problem with underground utilities is they don’t have a map for them.”

In response to Tweets criticizing Eversource’s service, Banks’ son received a was told a specialist will have to be brought in.

On Tuesday night, First Selectman Ken Kellogg promised to continue efforts to communicate and coordinate with Eversource until everyone in town has their electricity back.

The Banks have run their generator from 7 a.m. to 10 p.m. every day, turning it off overnight so the noise doesn’t annoy their neighbors. While this system has kept their food from spoiling, Sandy said it has been hard to sleep in a 90-degree bedroom.

“We opened the windows, but these tiny bugs got through the screen and I must have hundreds of bug bites,” she said, adding she had an allergic reaction.

Banks said they could not get a hotel room until Tuesday night, when they stayed at the Hyatt House Shelton, leaving their Bengal cat Kira at home.

“For dinners we’ll have a sandwich sometimes, anything that’s easy and doesn’t take a lot of effort,” she said. “Our stove doesn’t work. We’ve been cooking in the toaster oven.”

Last week, Banks received text and email messages from Eversource informing them their power would be restored at 8 o’clock Thursday night. But it did not come back until 4 p.m. on Friday.

Their son Nick had stopped by with his wife and two daughters. Banks said everyone took a shower and she threw all of the towels into the washing machine and started a load.

“With about 10 minutes to go, the power goes out,” she said. “I had a washing machine filled with water. I call Eversource again. We had power for one hour.”

Still without power on Saturday, Banks checked the company website, which told her there was no power outage at her address. She now feels it’s useless to check Eversource for updates, but still does.

“Nick and the girls brought over DVDs. We’ve been watching movies,” she said. “Dan bought more gas to feed the monster,” she added of the generator. “After watching ‘Little Shop of Horrors’ the other day, I thought my generator was the plant.”

2 thoughts on “Over 99% of Monroe has power, others are still waiting”