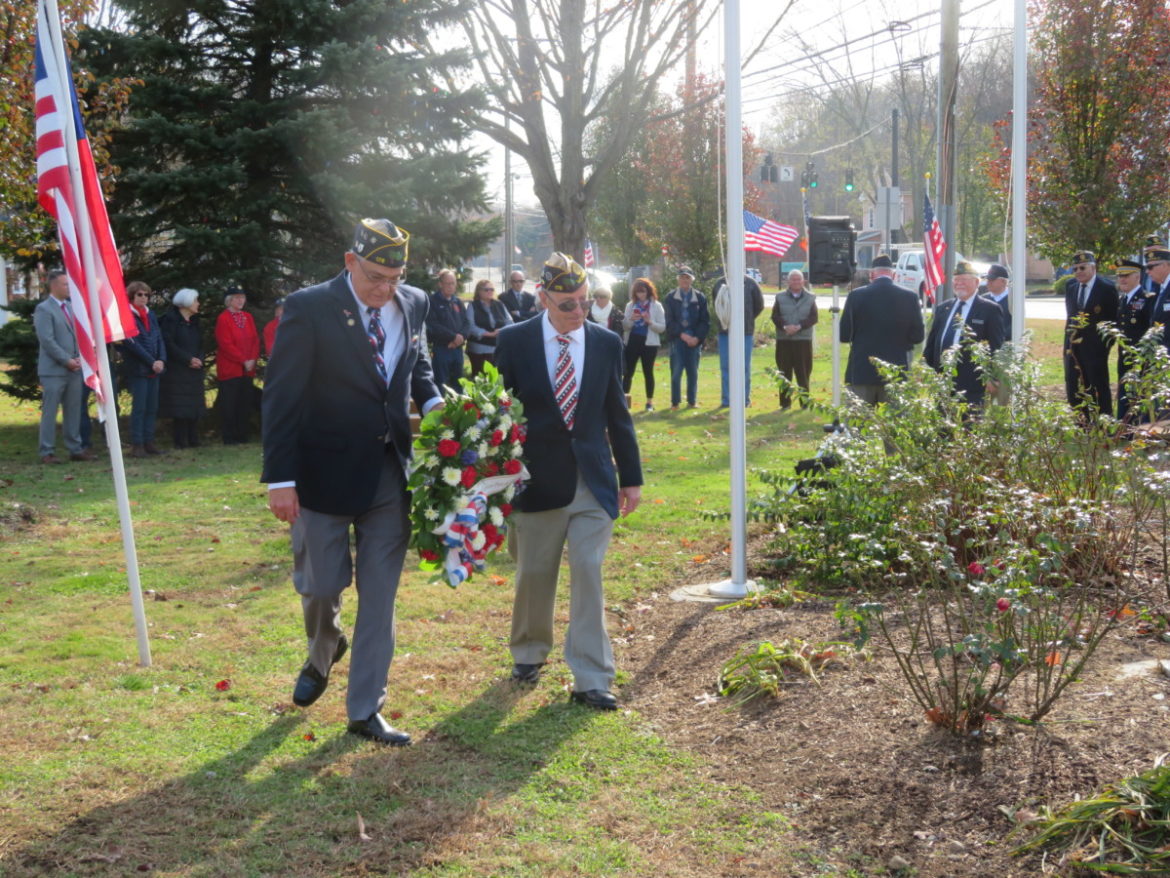 Dan Kirk and Andy Sentiments, of Sippin-Winspur Post 176 in Monroe, present a wreath on Stepney Green during a Veterans Day ceremony Monday morning.

Speakers at a Veterans Day ceremony on Stepney Green expressed gratitude for the sacrifice of the men and women who serve in America’s armed forces, past and present, and for the safety of those stationed in harm’s way overseas.

“We must make sure their sacrifice is not in vain,” First Selectman Ken Kellogg said on the crisp fall day Monday. Then he motioned toward the uniformed veterans, while adding, “your generosity has given us the gift of freedom we enjoy and, far too often, take for granted.”

American Legion posts from Monroe and Easton commemorated Veterans Day at the annual ceremony, which was led by Victor Yanosy, commander of the Sippin-Winspur Post 176 in Monroe.

“We don’t often think about the benefits that are given to us, the rights, the freedoms that are given to us, and they weren’t come easily,” Sredzinski said. “They happened because you said, ‘I will go.’ You may have raised your hand. You may have been drafted. But you went and you fought those battles that veterans have been fighting for 250 years and we need to make sure we don’t underscore how important those freedoms are.”

In the past two weeks, Sredzinski said he used his rights and freedoms to go to church, to openly disagree with his government, to write an opinion piece in The Monroe Sun and to vote.

“Most importantly, I voted,” he said. “I had a say in what my local community looks like and who leads it. These are freedoms that a lot of us take for granted on a day-to-day basis, and we shouldn’t. Today I’m glad that we’re here to honor the men and women who have served this country to guarantee those freedoms for us. Thank you. God bless you and God bless our country.”

The Save Our Stepney Task Force had placed 13 American flags on the green to commemorate its Flags Over Stepney program. In addition to the American flags, a flag will be flown for each branch of the United States armed services.

On Monday, wreaths were presented by Frank Bent and Don Whitely of behalf of the Monroe Lions Club and the Dan Kirk and Andy Sentiments for American Legion Post 176. 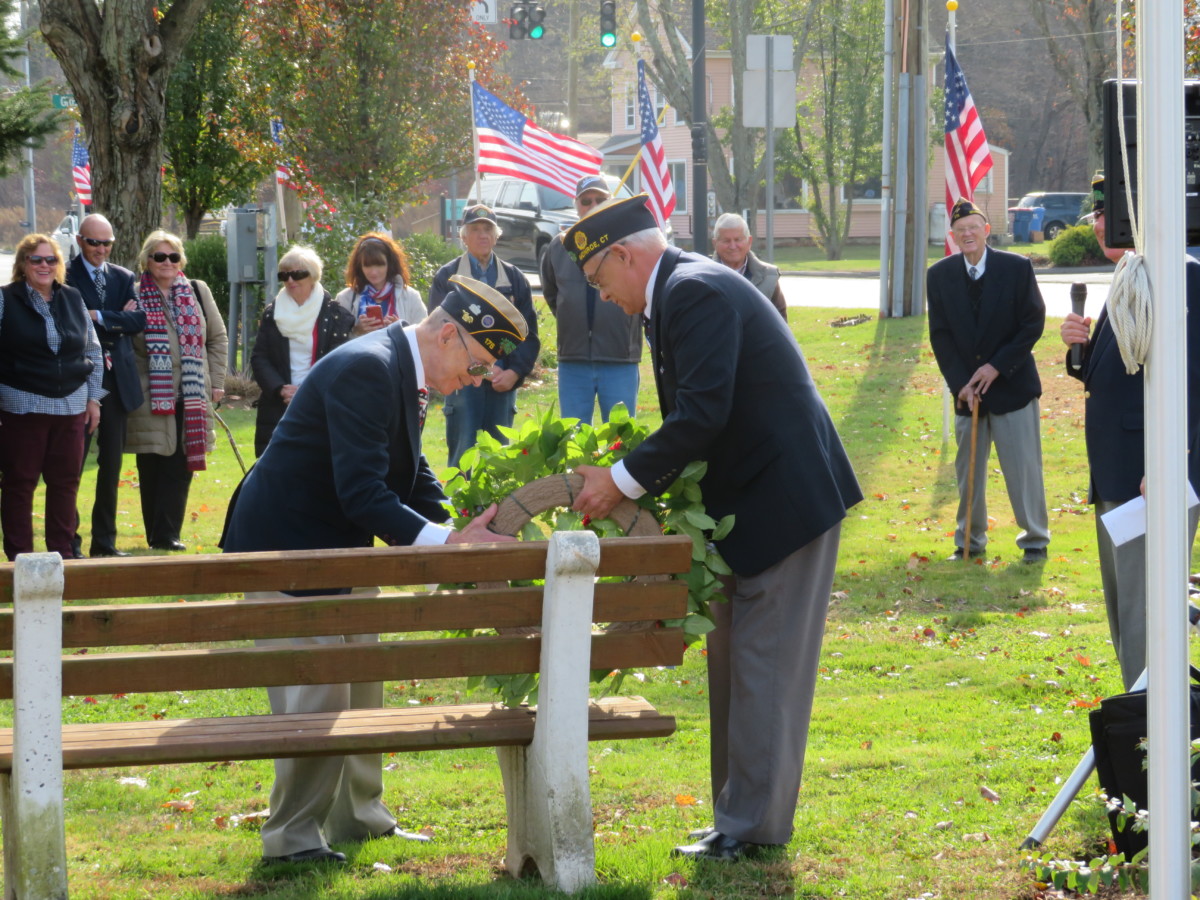 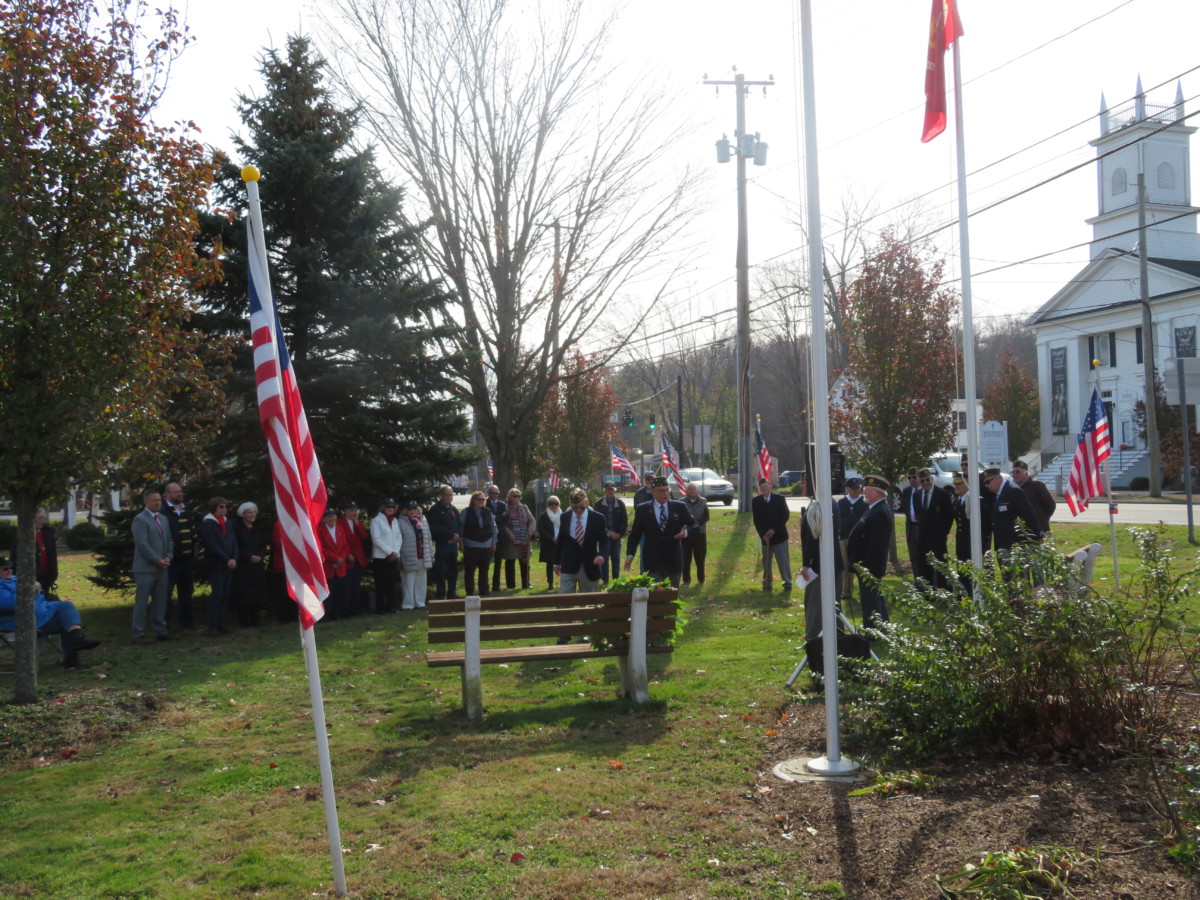 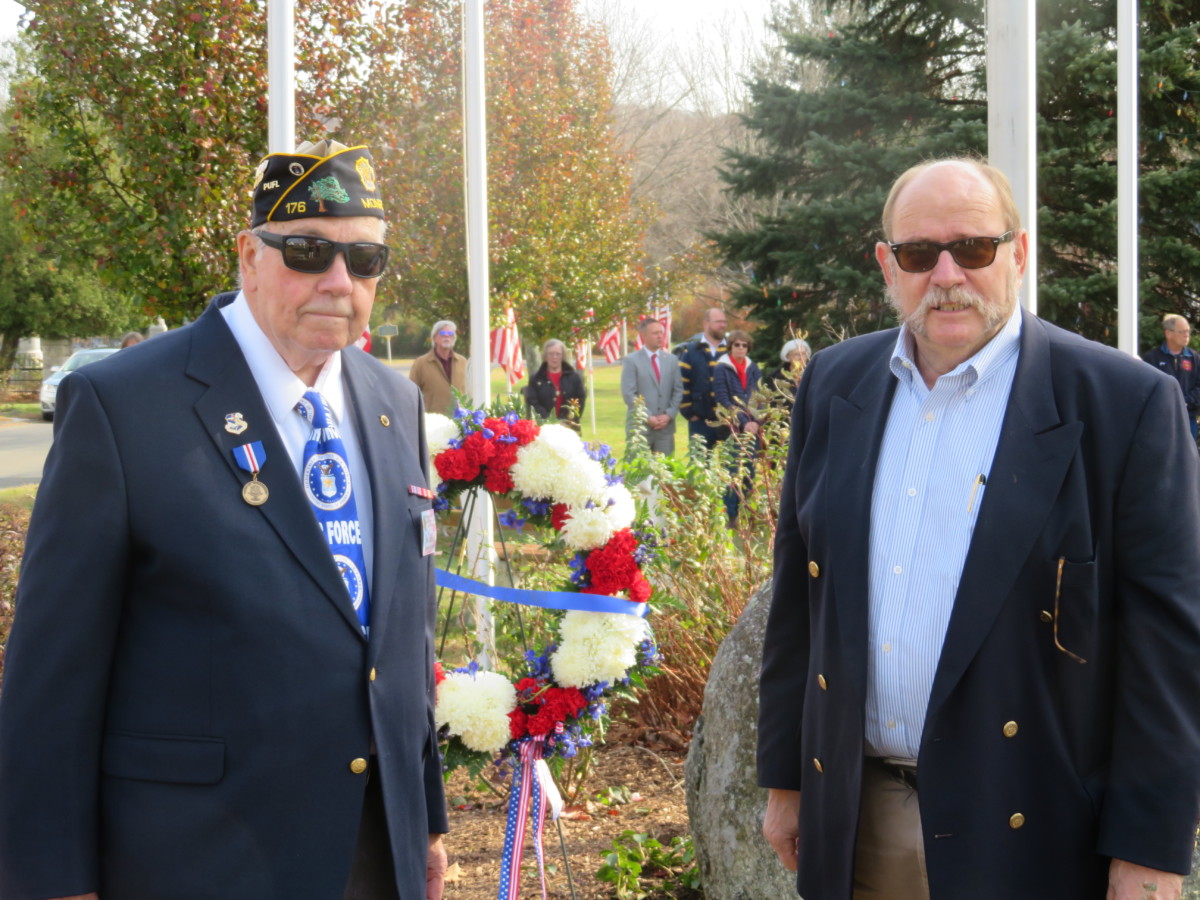 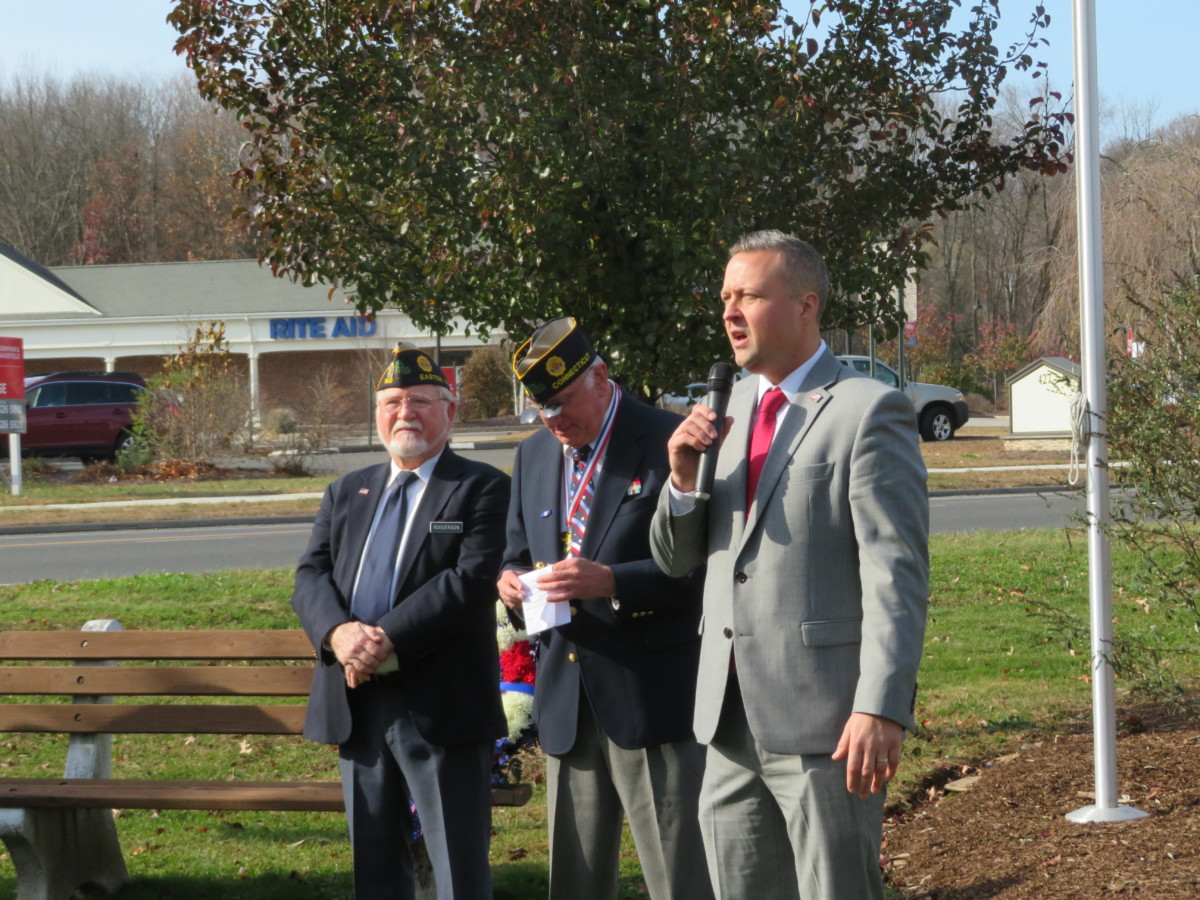 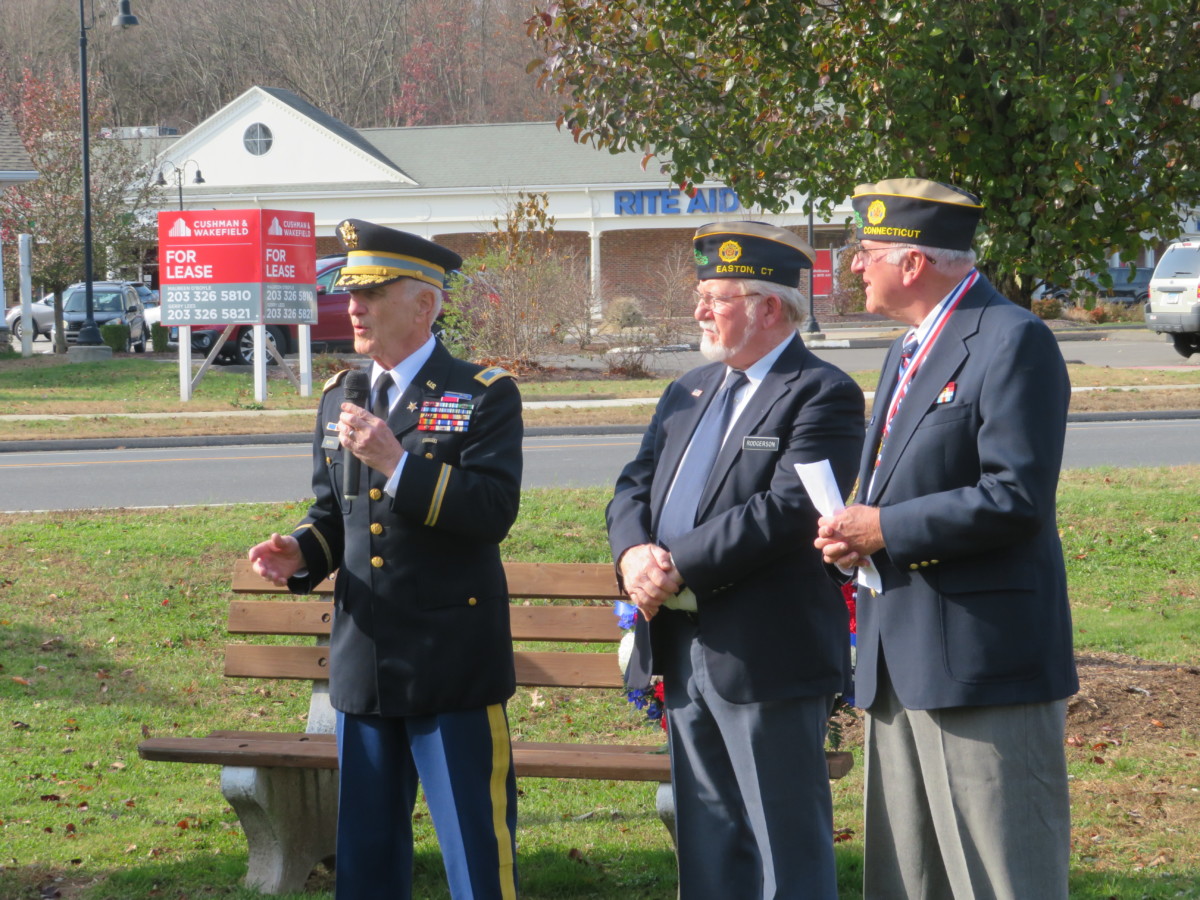 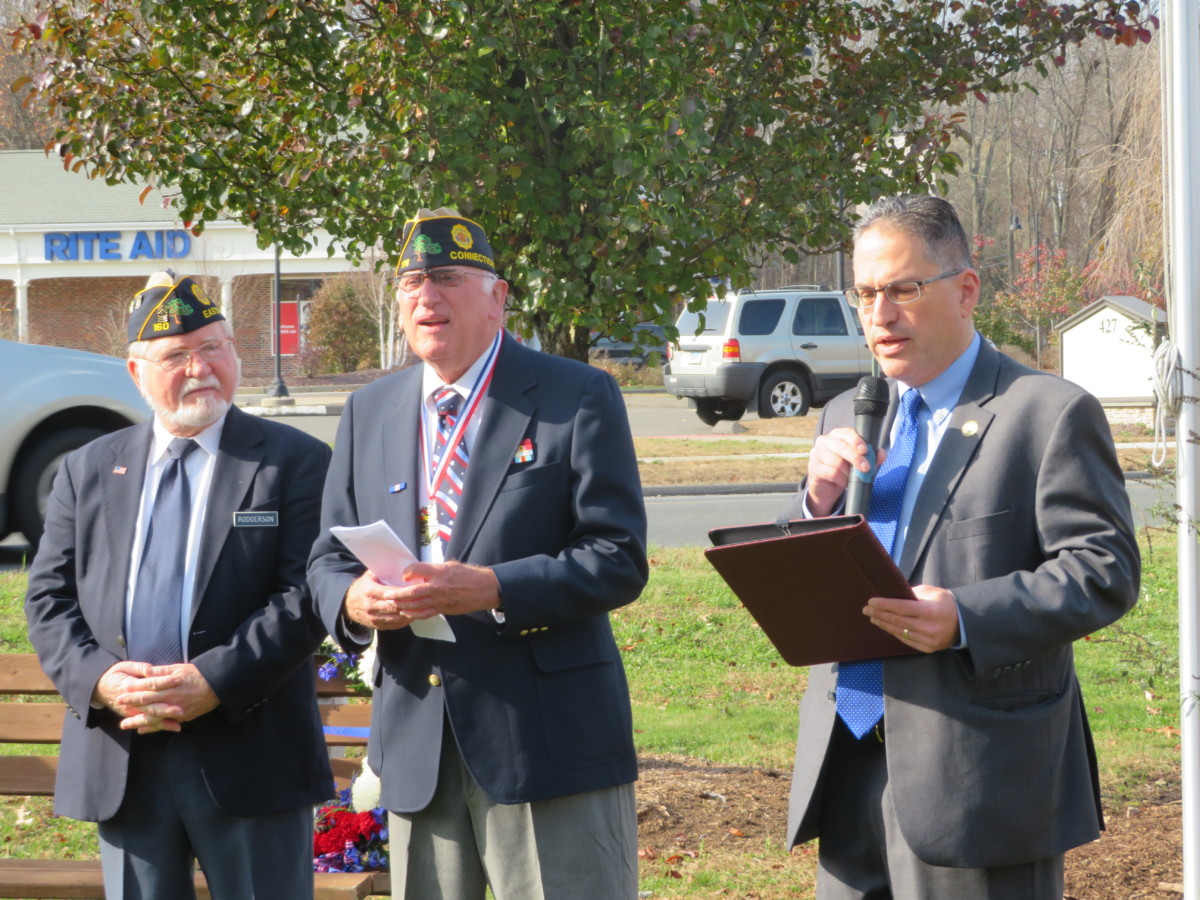 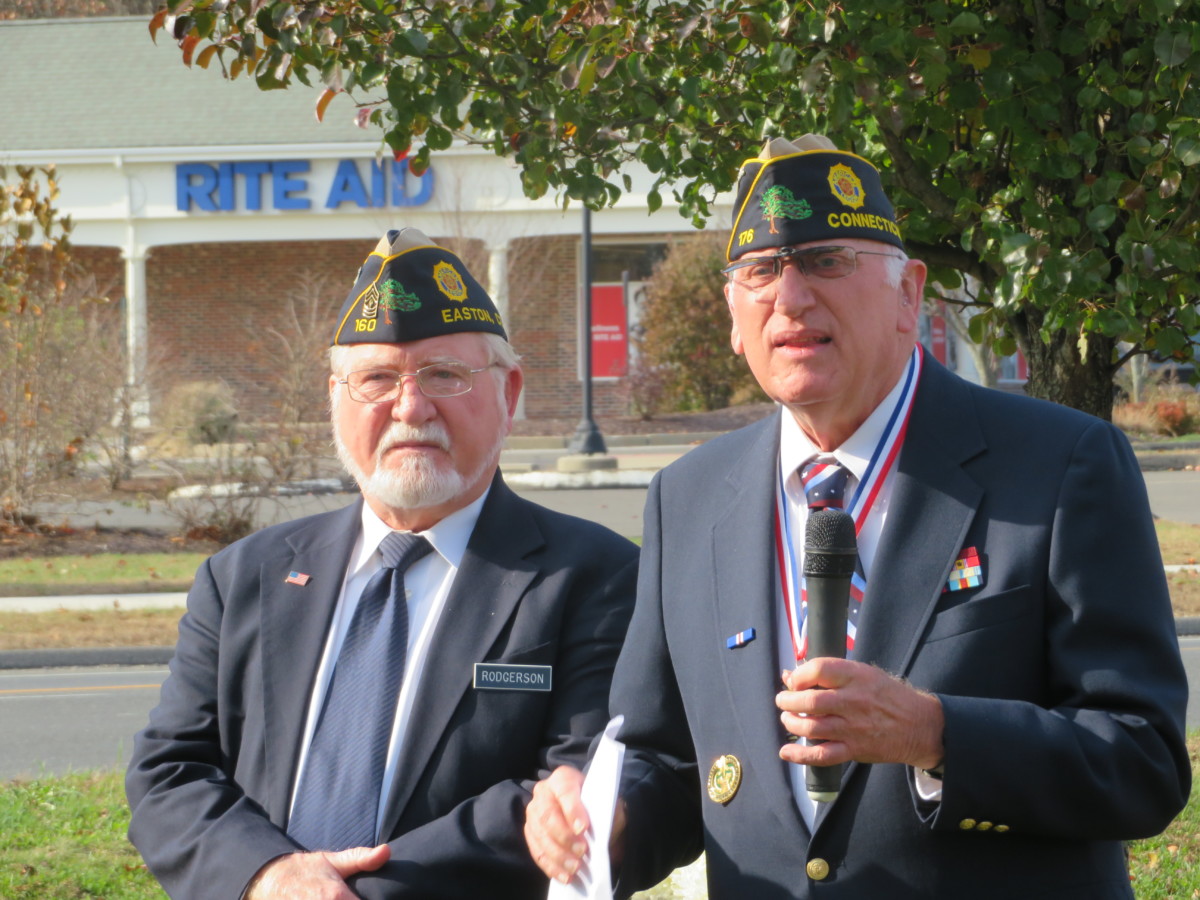 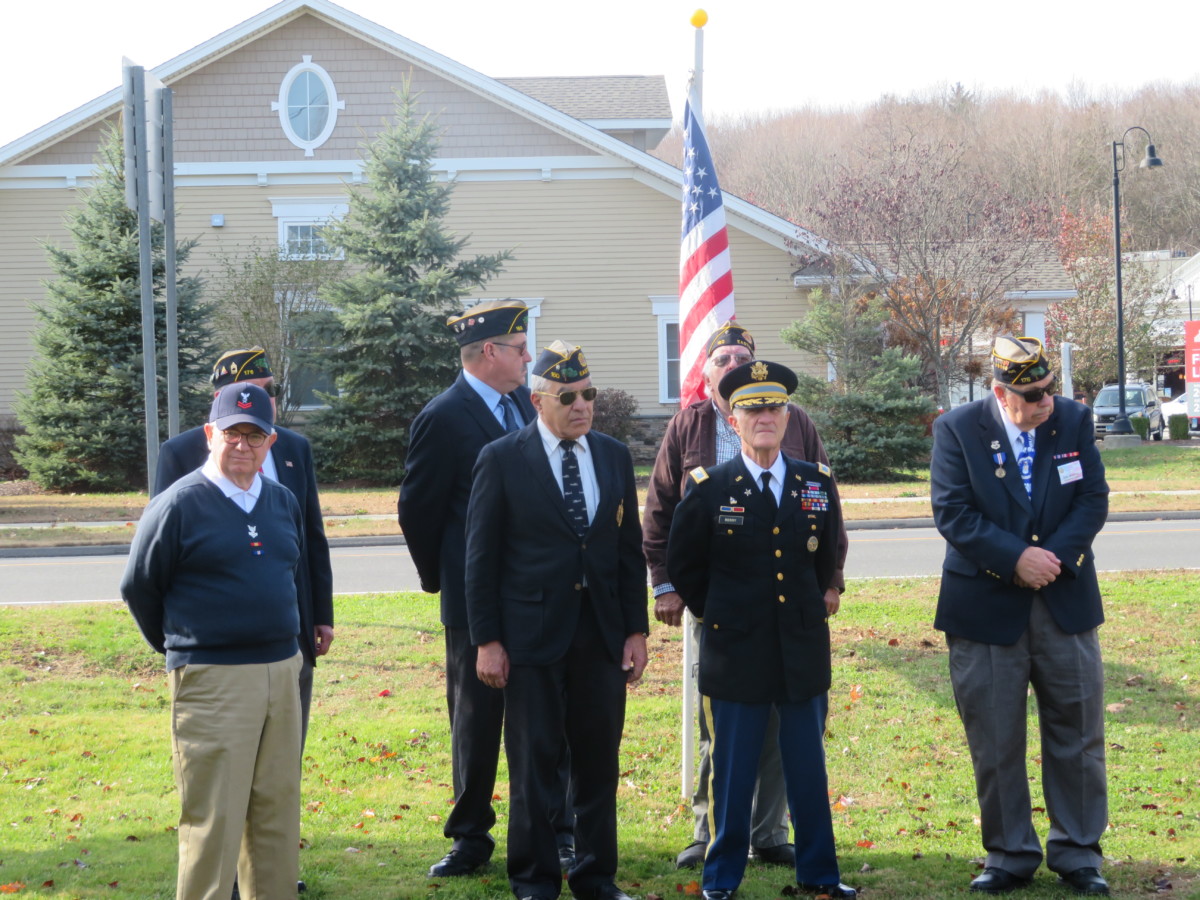 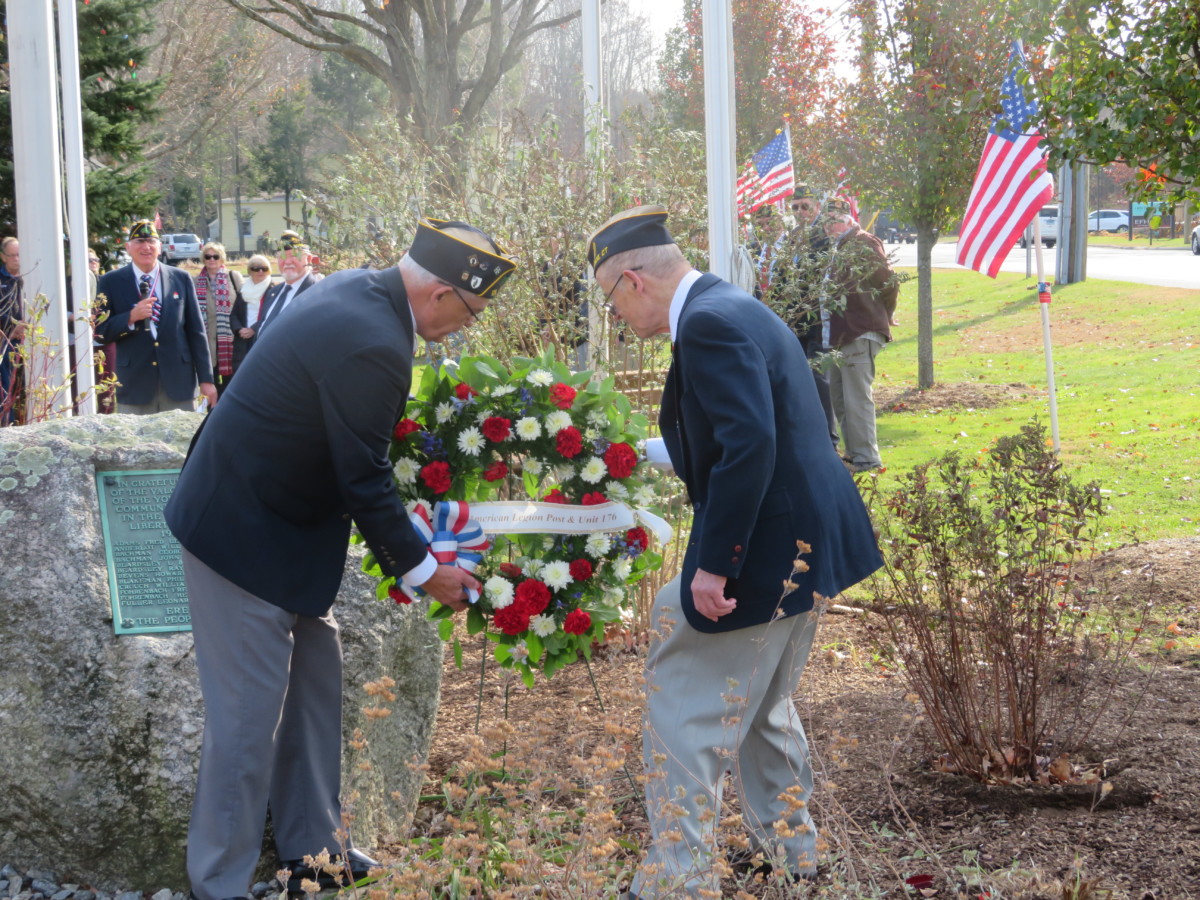 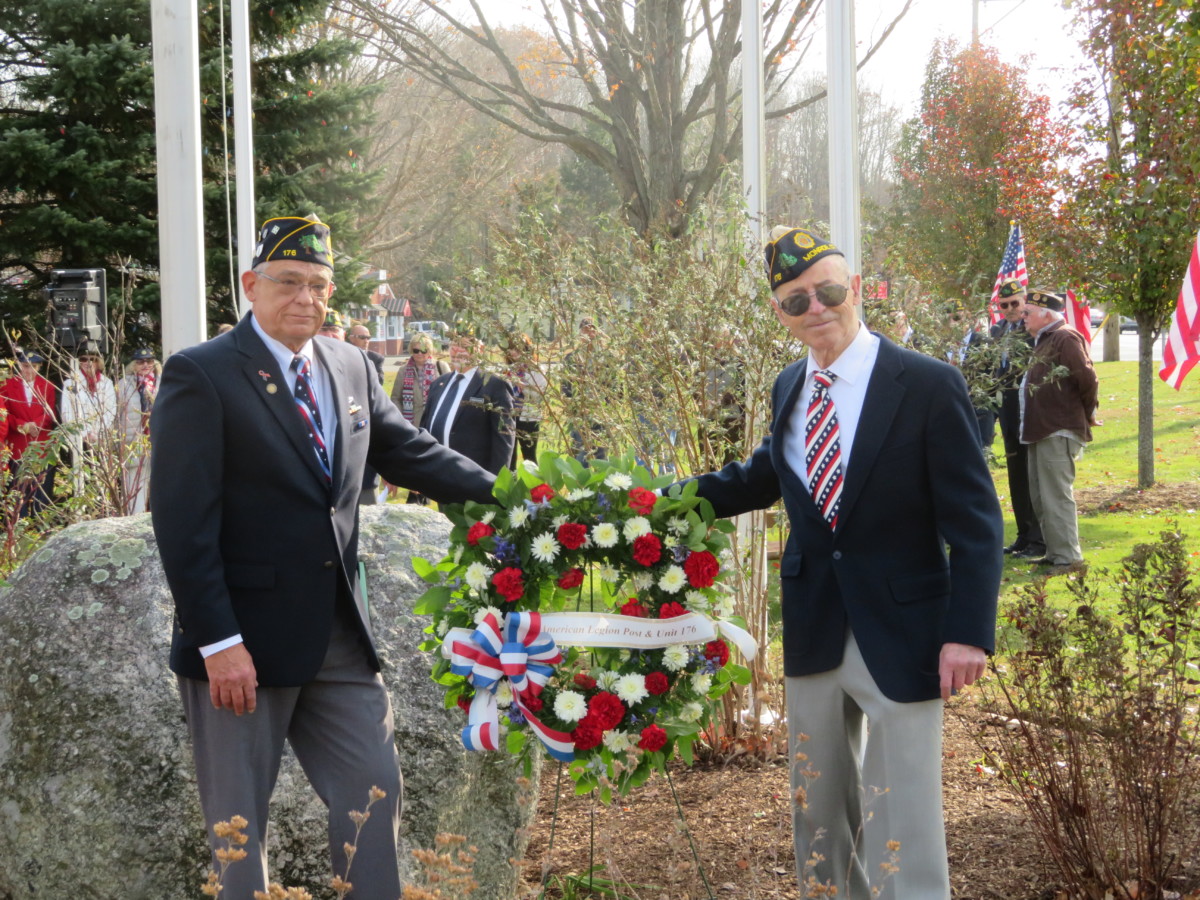 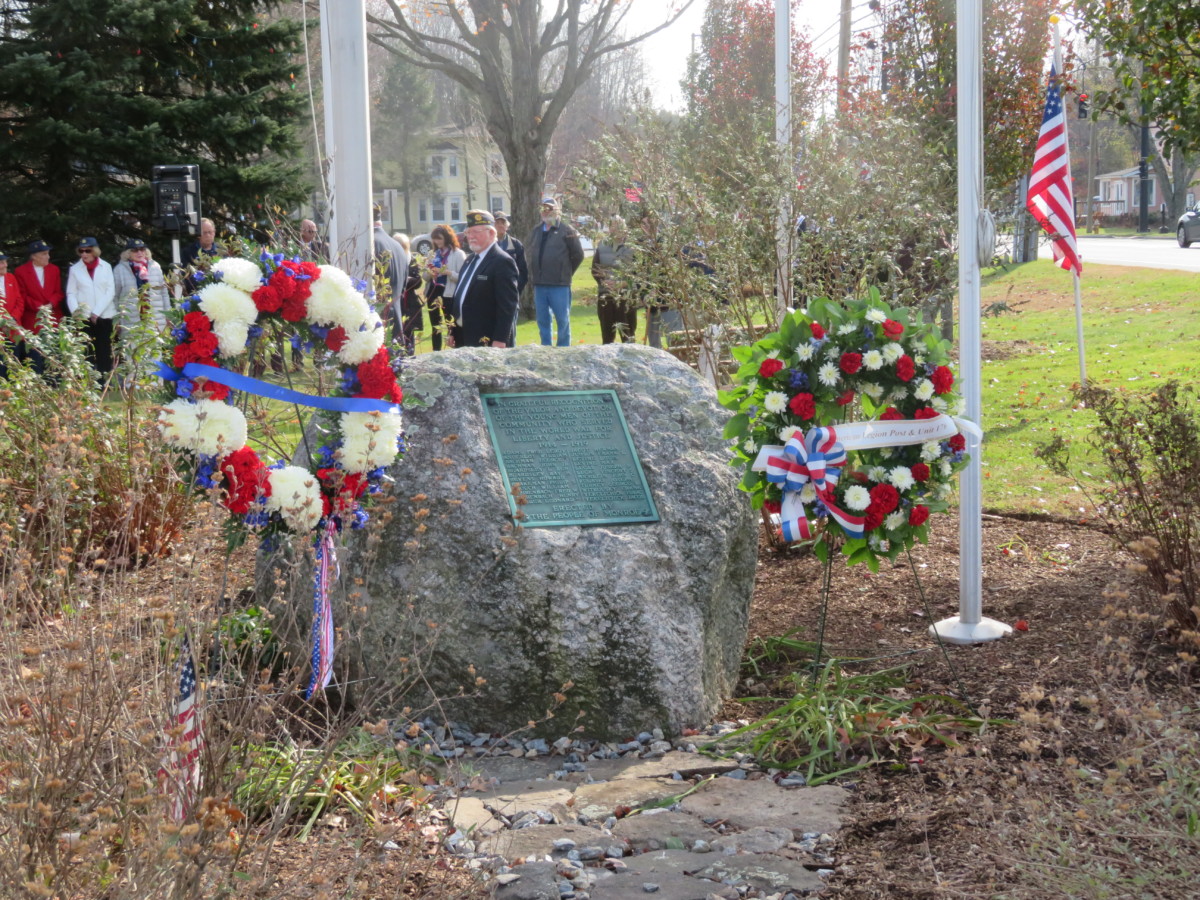 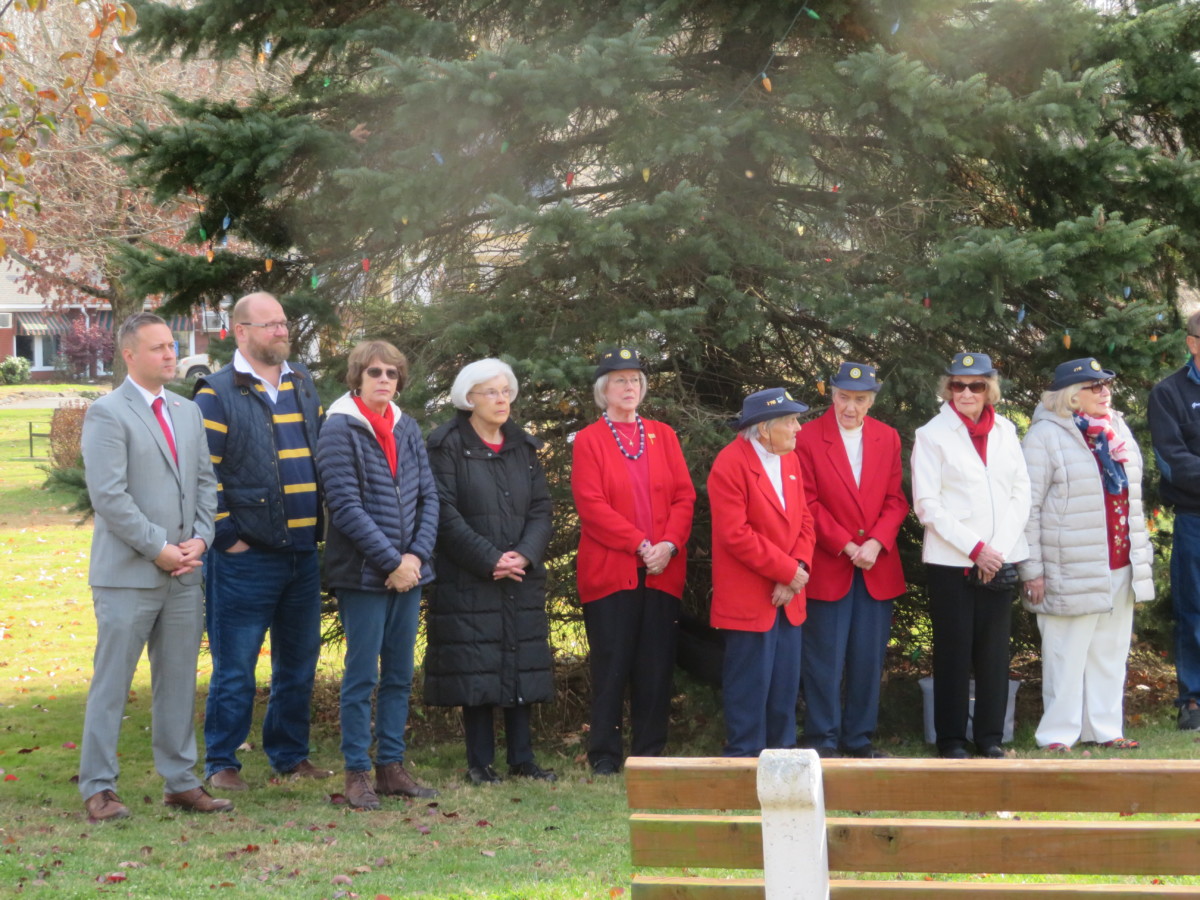 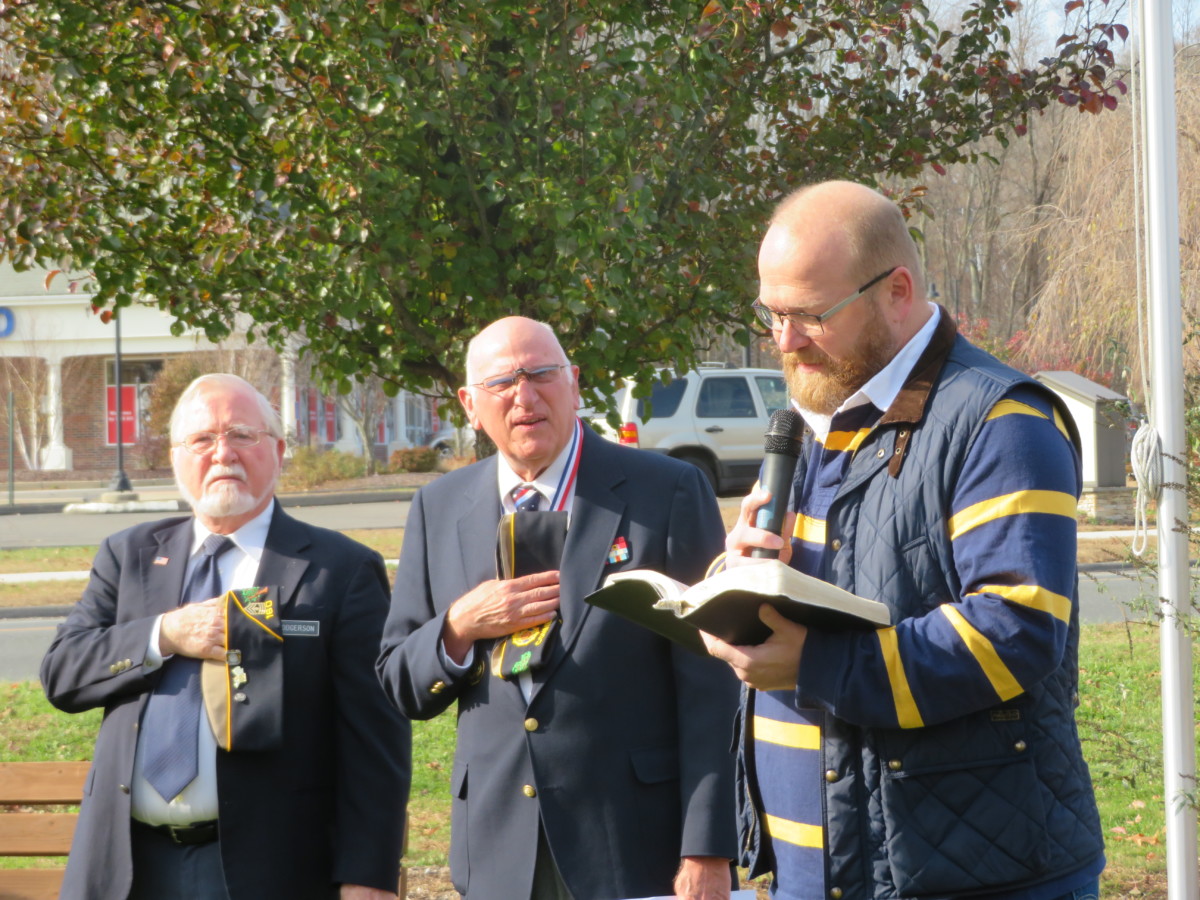 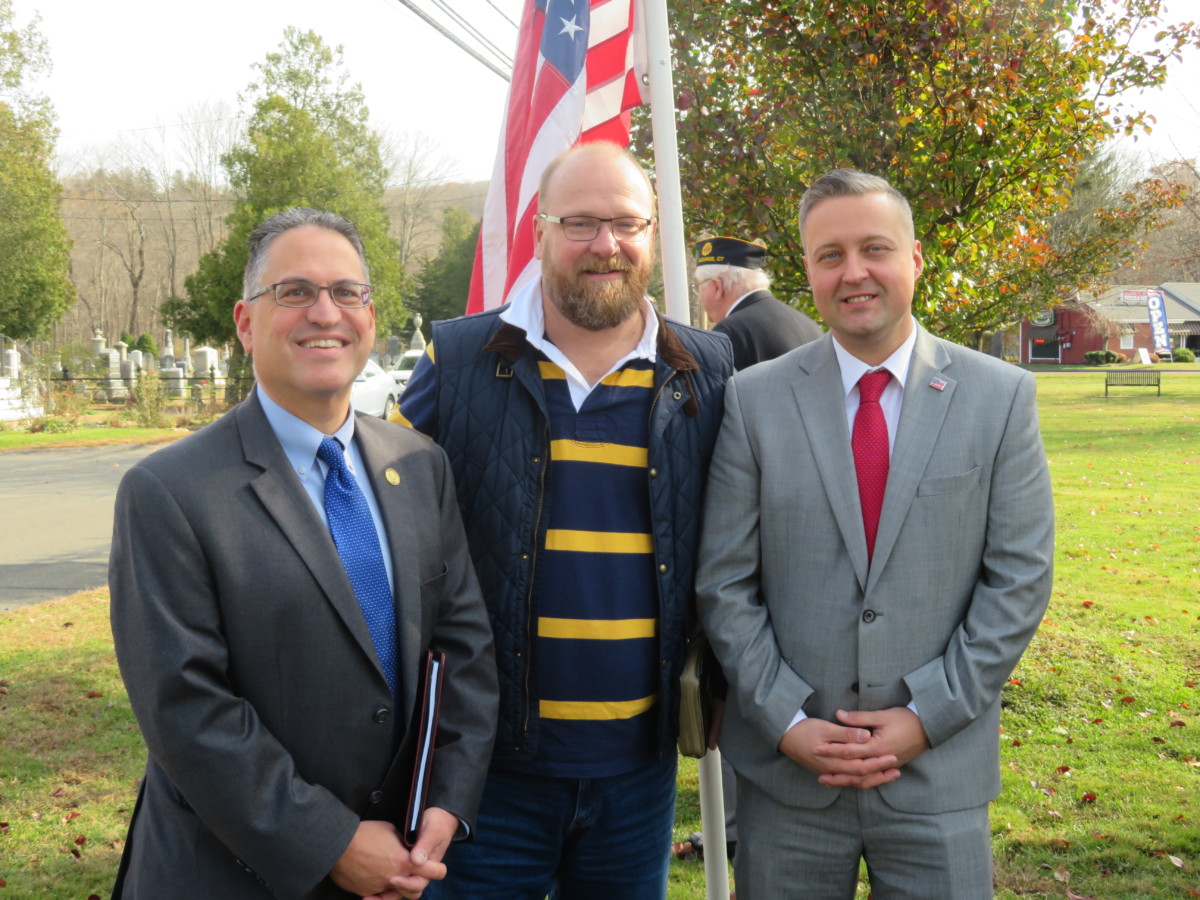 The Rev. Adan Rodriguez, of Our Lady of the Rosary Chapel, gave the invocation. “Bless them for the hardships they make,” he said of the veterans. “We respect them. We thank them. We’re proud of them. We honor them.”

A closing prayer was led by The Rev. Kevin Merritt, senior pastor of Stepney Baptist Church. He asked the Lord to protect 1.3 million in active service for our nation today, plus the 800,000 in reserve, “doing the work of the United States of America in remote places and here at home.”

Merritt expressed gratitude to the men and women of the Greatest Generation and beyond, who served, and for peace.

“Lord, we pray that our future will not be marked by wars, but by strategic negotiations, and that you would spare lives as our world gets more complicated and as violence increases in various ways,” he said. “We pray for a spirit of unity in this nation, which is sorely missing, and ask you to guide this great land and to give wisdom to our leaders, especially in D.C. right now. It’s such a chaotic time.”

Following the ceremony all veterans and their spouses were invited to attend the annual and traditional luncheon, hosted by the Girl Scouts of Easton, in the Notre Dame Church on Morehouse Road.