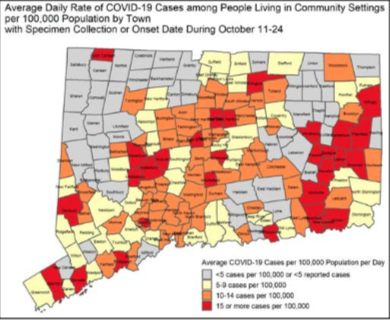 MONROE, CT — A surge of positive COVID-19 cases across the country is also being felt in Monroe. This week the town turned orange on the Connecticut Department of Public Health’s alert map, one color away from the highest alert, which is red.

Last week, First Selectman Ken Kellogg warned residents how the town was trending in the wrong direction with the number of positive cases. Today he issued a CodeRed reminding everyone to social distance, wear masks and wash their hands often.

“Monroe is definitely getting impacted by this resurgence and we have to be cautious,” Kellogg said Friday. “The cases in town do not appear to be the result of visiting local businesses or being in the school system. It all goes back to smaller gatherings.”

The first selectman said it is human nature to relax and let your guard down around family and friends. With Halloween coming this Saturday, Kellogg reminds residents to avoid unnecessary large gatherings.

“We can all do our part to try to flatten this back down,” he said, “and that’s the call to action to take it seriously and do all the things we’ve been saying all along. We have to come back, come together and keep everybody safe.” 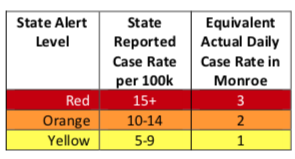 The DPH map is based on a rolling two-week-average of the case rate per 100,000 people. Gray, which is less than five cases, is the lowest. Monroe was gray two weeks ago, but joined most neighboring towns in rising to yellow last week, or five to nine cases per 100,000.

“This is going to be a marathon,” Kellogg said. “We’re going to have periods where it’s going to surge.”

“We had a good summer related to this,” Kellogg said. “All the experts said it was likely we’d have a resurgence in the fall, and that is what we’ve seen. We can’t get complacent.”

He said the difference between now and the spring is people are wearing masks and are more aware of social distancing. The state is seeing a younger population of people in their 20s getting sick, but they are generally healthier with less serious illnesses, according to Kellogg.

Other good news is the average length of hospital stays are half of what it had been when the pandemic first hit the state, with less ventilators being used and less ICU care, Kellogg said.

Though there is not yet a vaccine, he said hospitals are making strides in patient care.

“Early on, it was more learning as you go,” Kellogg said. “A standard of care has developed. There is a better understanding of therapies, and improved oxygen therapies that are keeping people off ventilators. There are antibody treatments out there. Those are all the positives.”

The state positivity rate jumped to 6.1 percent Thursday, with the rolling seven-day average up to 3.1 percent.

“This is the highest since June,” Kellogg said in his weekly update on the pandemic. “Almost half of the state’s towns and cities are at the orange or red alert level, representing approximately 70 percent of the state’s total population.”

“As seen on the state map, Monroe is now among 53 towns and cities in the ‘orange’ alert category,” Kellogg wrote. “Monroe is currently experiencing case rates that are trending towards the red category.”

He said the town received new information from DPH Thursday regarding interpretation of case data. 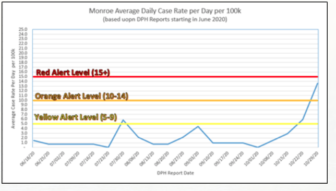 “To further refine and align with CT DPH data, we are now providing a graph of the “Average Daily Case Rate per 100k” in Monroe, which DPH began reporting in June,” Kellogg said.

Here is the rest of the first selectman’s update: