NEWTOWN, CT — Thieves stealing a car in Monroe also have to worry about eluding police in Trumbull, Newtown, Stratford and even as far south as Fairfield and Westport. Operation Wingspan, a regional task force which also includes the FBI, brings local police departments together with the common goal of recovering stolen vehicles and bringing criminals to justice.

Approximately 20 officers of the task force meet regularly in the Fusion Center in Bridgeport to go over lists, live cameras and data from license plate readers to track down stolen vehicles.

On Wednesday morning, Newtown Police Chief James Viadero hosted a press conference with law enforcement leaders from other towns at his department’s headquarters to share the accomplishments of the program, which has been in place since Sept. 22.

“We’re very happy with the results,” he said from the conference room podium. “We’ve seen a direct impact in the decrease in these auto thefts. We’d like to see a zero, but we’re realistic. We know that’s not going to happen.” 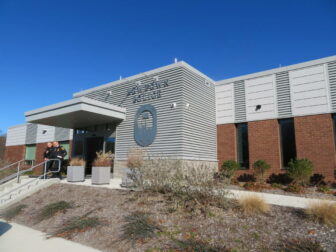 Since Sept. 22, Operation Wingspan resulted in the recovery of 84 vehicles, 70 of which were reported stolen, as well as seven juvenile arrests, 38 adult arrests, the recovery of 12 firearms, five seizures of narcotics and 11 vehicles recovered in the commission of a crime.

Of the stolen firearms, Monroe Police Chief John Salvatore said police know of one having been used in a shooting in another city.

Money for Operation Wingspan, named for the expanded reach of law enforcement among bordering communities, comes from $5 million of COVID relief funds. Bridgeport was given $195,000 and the other participating towns received $35,000 each.

Bridgeport Acting Police Chief Rebeca Garcia talks about Operation Wingspan, of which Bridgeport is the hub.

Garcia said the money is being used for the salary and overtime pay of task force officers. The funds will be expended by the end of December, according to Lombardo, who joins the other chiefs in their hope the State will find another funding source to keep the program going.

Salvatore said he believes the task force is helping Monroe’s officers recover stolen vehicles faster. “It’s been surprisingly satisfying to see these results, so I’m in full support with this task face,” he said.

McNeil said his town of Stratford was averaging seven stolen vehicles a day, adding it is down to zero in the past 10 days.

The chief said stolen cars are not only dumped off, some are later being used for other crimes. As a result, McNeil said Operation Wingspan’s work has been helping officers solve cases beyond the car thefts.

“People are assigned and they’re actively going out there and preventing crime,” he said of the task force, “and now there’s a knowledge that we’re out there, and we’re looking for this, and we’re gonna find you — and that’s a deterrent.”

“This work cannot be done without our officers that are the boots on the ground doing the work,” Garcia said. “We said yes. We provided the officers to this initiative. But without them, this would not be possible, so I definitely have to thank each and every officer that was assigned to this initiative.”

A crime of opportunity 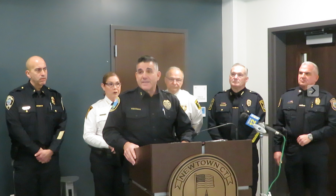 Though Operation Wingspan is having success in proactively combating the uptick in motor vehicle thefts, Viadero reminds the public that this is a cooperative effort.

“We can’t stress enough to the public, we need cooperation,” Viadero said. “Please, keep your cars locked. Do not leave key fobs in the car. What you’re doing is you’re giving somebody the opportunity to steal that car, and the end result could be tragic.”

As an example of something that could have turned tragic, the chief spoke of an incident in Ansonia, when a driver left a car running while going into a store. Someone got in and drove off, while two teenage passengers were inside. Luckily, the thief allowed the teenagers to get out of the vehicle safely, Viadero said.

Garcia said a pattern has been identified showing “certain juveniles” involved in car thefts, adding police are working with probation officers. Viadero said there has been a social media phenomenon of young car thieves stealing vehicles and posting about it on Instagram and Facebook.

However, Garcia said there is no evidence of an organized effort among car thieves at this time. She said it is a crime of opportunity, in which juveniles and adults search for unlocked doors and key fobs left inside vehicles, or steal a car when someone leaves it running to go into a store quickly.

Viadero said another problem the task force is looking into is an increase in stolen catalytic converters, which thieves take to sell the metal.

“It’s very important to continue this, because we’re actually having solid results,” McNeil said of Operation Wingspan. “We’re trying to get the message out that this is something we have to continue.”