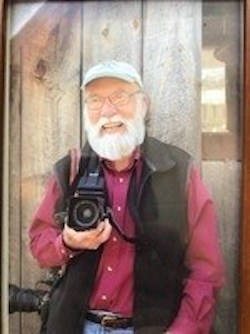 Editor’s Note: This obituary first ran in the Westport-News and the Connecticut Post on Mar. 20, 2021.

Karl Decker of Monroe, Conn., and Townshend, Vt., died March 18, 2021 at his home in Monroe at age 88. He was a teacher, photographer, writer, husband, father and grandfather.

Decker was born November 14, 1932 in Boston, Mass. His parents were Dr. Briant L. Decker of Idaho Falls, Idaho, and Anna Marie Eggertson of Provo, Utah. He lived in Brookline, Mass., and on the extended family farm in Townshend, Vt.

His claim to a small place in American history was that two of his great-great-great aunts, Clara Decker and Lucy Decker were two of the Mormon prophet Brigham Young’s wives and the only ones to accompany Young in 1847 on the Mormon immigration to what is now Salt Lake City.

Decker graduated from Milton Academy in 1950, Colby College in 1954, and Columbia University in 1960. During his military service he married Merrillyn Anne Healey of West Hartford. They were married for 65 years.

In the 1960s, he and Merrillyn founded and edited the local newspaper, the Monroe Courier. He was also a supervisor in the Fairfield County Soil and Water Conservation District.

An avid lifelong photographer, in 1987, he studied photography as a fine art with a grant from the National Endowment for the Humanities. He also began a documentary project, photographing and writing stories about the people of Townshend which culminated in a 2012 book, The People of Townshend, Vermont.

He taught at Staples High School in Westport from 1960-1999 and went on to work for Vermont Magazine for six years, traveling throughout the state writing and photographing stories of life mainly in the very small, back country towns.

His observations on the critical social and declining economic conditions in these towns culminated in a lecture presentation, “The Tour Buses Don’t Stop Here Anymore” at Colby College and three Vermont Colleges.

After writing some dozen short stories, and two brief residencies at the Vermont College of Fine Art in Montpelier, Decker began work on a novel, “Seeing Emily Home,” set in the Depression years in a small, dying Vermont town.

He leaves his wife, Merrillyn, daughter Christine Lowry and her children Brian Jeffries and Danielle Marenholz with their spouses, son Lawrence Decker and his wife Holly and their children Bryce, Silas, and Carly, and daughter Karen Decker and her sons Matthew and Jonathan.

A celebration of Decker’s life will be held at a later date. Messages may be sent to: [email protected] Contributions may be made in Karl’s memory to the American Civil Liberties Union, Doctors Without Borders, and the Grace Cottage Hospital in Townshend. Karl’s last words were, reportedly,
“Don’t mourn for me, I’ll be close by whenever I hear your laughter.”