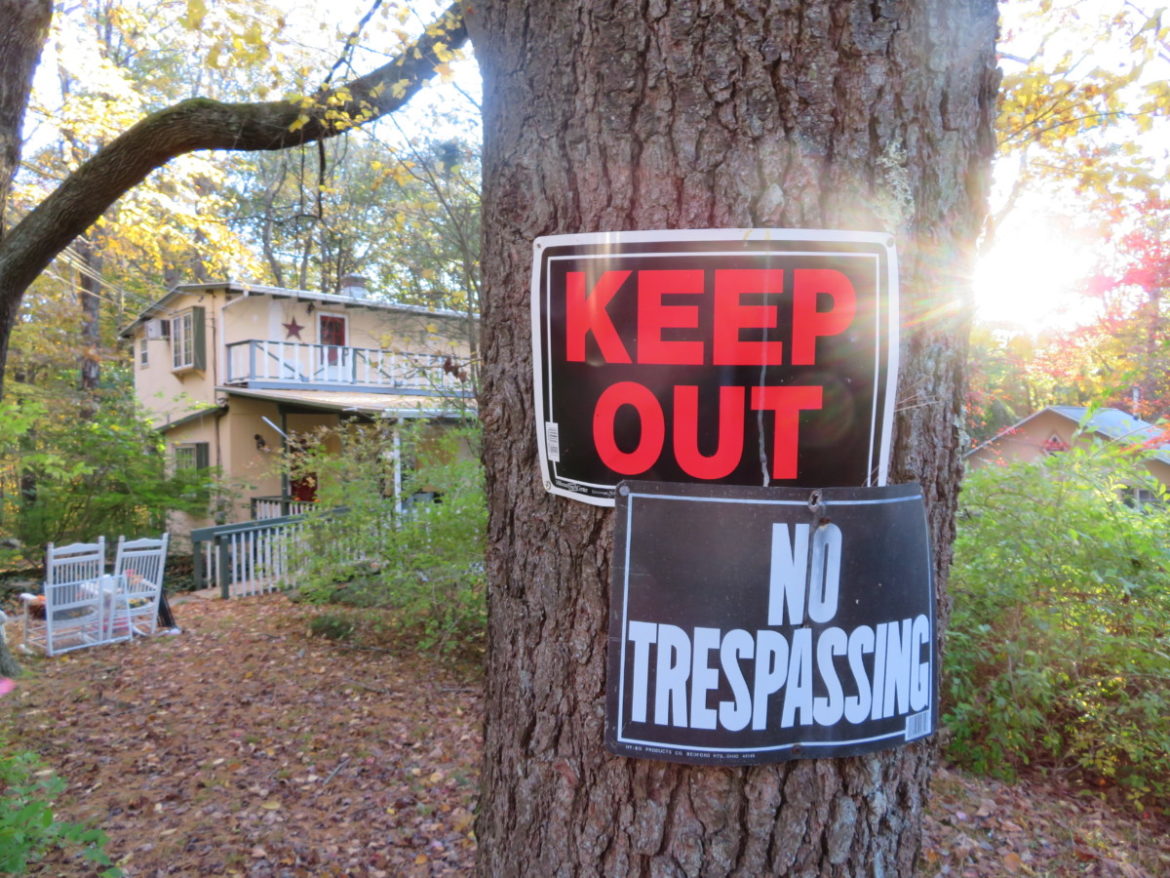 A beige colonial house set back on a wooded property on Knollwood Street has notoriety as the former home of late ghost hunters Ed and Lorraine Warren. It is also the site of the Warren’s Occult Museum, with haunting exhibits like the infamous Annabelle doll. The museum was closed for a zoning violation, because the use is not allowed in residential neighborhoods, but that has not stopped occultists and tourists from descending upon the small dead end street.

Neighbors have complained over the years about strangers knocking on their doors and tapping on their windows at all hours to ask where the museum is. Residents also contended with noise, trash, public urination and discarded cigarette butts in their yards, and cars parked along the narrow street, causing a safety hazard by blocking access for emergency vehicles, such as ambulances and fire trucks.

“It is not a museum,” Police Chief John Salvatore said. “It is a residential house. The street is a very narrow public roadway, inadequate for parking for any commercial enterprise. And the traffic generated by the home inconveniences neighbors.”

Fire Marshall Bill Davin said if cars park on both sides of the street, firefighters’ larger trucks may not be able to get through.

Zoning Enforcement Officer Joe Chapman filed a cease and desist order to stop the museum operation at the house in 2017 and Kimberly Wolff Thompson, who lives on Knollwood Street, said Tony Spera, the Warrens’ son-in-law, closed the museum. 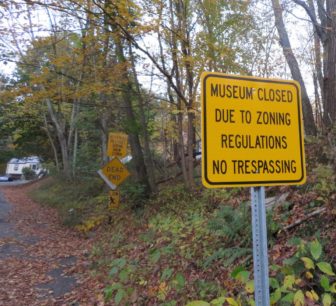 The town placed this sign at Knollwood and Main streets last year, to notify occultists and tourists the Warren’s Occult Museum is closed.

Salvatore said the town erected an advisory sign at Knollwood and Main Street, letting people know the museum did not comply with zoning. The yellow sign with black lettering says, “Museum closed due to zoning regulations. No trespassing.”

The chief said police officers routinely patrol the area and most of those going onto private property are advised to leave, while some are issued fines for simple trespass.

A neighbor called police after seeing three cars on the street on Sunday, Oct. 13, and police issued infractions to two people in a group on the Warren property. Salvatore said things can be quiet, but police tend to get more calls this time of year, with Halloween approaching.

“Keep Out” and “No Trespassing” signs are posted on trees in front of Warren’s house and Thompson said she recently saw Spera add more.

Spera also posted a message on the New England Society of Psychic Research website saying, “The Occult Museum is closed due to zoning regulations. We are seeking a new location for the museum.”

But Salvatore said the language in news articles and other online postings make it sound like a functioning museum.

“I have been in compliance with the town’s order and have added more signage in an attempt to quell curious visitations from fans,” Spera wrote in an email Tuesday. “I have done everything to the best of my ability to stop the intrusion of unwanted guests. I am not happy with people crawling around the house at all hours either, and the burden placed on neighbors and the local police department, who do a fantastic job of checking on and clearing the property.”

Spera said he installed extra security lights, and will be adding more, along with new security cameras. 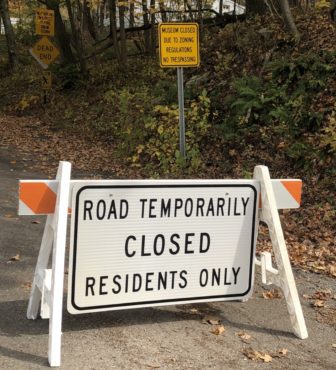 First Selectman Ken Kellogg had this temporary sign placed at Knollwood Street and Main, because trespassing increases around Halloween.

Aside from working with Salvatore to resolve the problem in her neighborhood, Thompson said she spoke with First Selectman Ken Kellogg.

“I’m very sympathetic with their concerns,” Kellogg said. “It’s not just the traffic. People from out-of-state are wandering around the neighborhood, knocking on other residents’ doors asking about the museum.”

The first selectman said the town was in the process of putting up temporary signage, because of the Halloween season. A sign went up on Friday.

In the land use offices at Monroe Town Hall, Chapman brought out a folder with documents from the zoning dispute at Knollwood Street.

In response to neighbors’ complaints in October of 2014 about parking, noise and garbage left, such as beer bottles and cigarette butts, Chapman said he gave Spera a Notice of Violation that November.

“It was a non-permitted commercial use, because they were charging people,” Chapman said of the museum operation.

He said it was quiet for a while, but as Spera became more involved, the activity ramped up. Chapman said, “he responded with a letter saying, ‘sorry about that, we won’t do it any more,’ and a sign was posted to keep out.”

“In August of 2016 I sent a citation saying the use was not permitted in the zone,” he said. Before the 10 day window to respond was up, Chapman said Spera responded by asking for a hearing, so he could plead his case in front of a hearing officer.”

Chapman said he submitted a letter with signatures from eight Knollwood Street residents (some were couples) as evidence during the hearing at Town Hall.

In October of 2016, Chapman’s  decision to issue a citation was upheld and any advertising for the museum had to disappear, whether online or in print, and no more tours of the museum were allowed.

Then Chapman received an email from Knollwood Street residents complaining about TV crews from Connecticut News being at the museum to interview Spera in October.

Spera had a number of Facebook requests for tours on Oct. 22, 2016, but he posted a message that the town shut the museum down and he ceased tours, but was appealing it, while looking to relocate, according to Chapman.

“I received a letter from him saying, ‘I’m trying to remove the website information, but people post all over, so it’s hard,'” Chapman said.

After that, residents complained in an email about a stranger parking in front of the house, asking where number 30 was. “People came from Pennsylvania, New Jersey,” Chapman said. “People come from all over.”

In October of 2017, Chapman filed a cease and desist order to stop the museum operation. Spera appealed it before the Zoning Board of Appeals, which found it was a violation of the municipal regulations ordinance and slapped him with a $13,500 fine.

It has been quiet since then, Chapman said, adding the $150 per day fine continues to accumulate, because Spera has to show full compliance with the order, which is difficult to do because of the Internet.

If Spera decides to sell the old house, Chapman said, “he would have to go in front of a hearing officer to void the fine in some way. We try to work with people to fix the problem. The goal is compliance.”

On Sunday, April 8, 2018, Spera emailed Chapman to preempt neighborhood complaints when he invited a television crew to Lorraine Warren’s house for an episode of a TV program on the Travel Channel.

“Fair enough,” Chapman replied, writing that type of event was not a problem. “We are certainly happy that the tours have ceased. I do hope that the Travel Channel piece does not generate any neighborhood traffic, that would be very unfortunate.”

If Spera decides to start a permitted museum business, he can now do so in Monroe. After 2016, the Planning & Zoning Commission decided to allow museums in some commercial areas, including Business 1, Business 2 and Limited Office Retail zones. 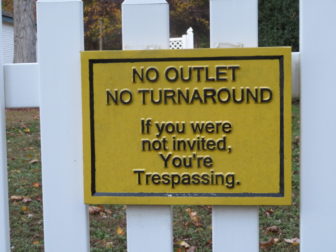 One resident posted this sign on her fence to discourage trespassing in the Knollwood Street neighborhood.

Kimberly Wolff Thompson has lived across the street from Lorraine Warren’s house for 23 years. When she had moved to the quiet neighborhood to raise a family, she became fast friends with Ed and Lorraine Warren.

“We met them during our home inspection,” Thompson recalled. “They were family for us. It’s a great little neighborhood. I came from New Jersey and had no clue who they were.”

But then “The Conjuring” horror movie came out in 2013 and there was advertising for the museum on the Internet, according to Thompson, and son-in-law Tony Spera held events at Lorraine Warren’s house Saturday nights.

Thompson said 50 to 60 cars parked on the circular driveway and the street. In addition to the noise and loitering, she said some drivers would knock over sections of her rock wall, while turning around.

“It is unbelievably creepy, the people that come here,” said Lisa Pawlak, a Knollwood Street resident.

Then two other movies in “The Conjuring” series came out, along with “Annabelle,” making matters worse for the residents of Knollwood Street.

“I’d be eating dinner with my sons and they’d knock on my window, startling us, asking, ‘is the museum open? Where is the museum?'” Thompson said.

She said one of her sons would be mowing the lawn, when someone would tap him on the shoulder to ask about the Warren’s house.

Before Lorraine Warren died last April, Thompson said she saw people peering into her windows and taking pictures. She expressed her belief that Lorraine’s spirit is still there.

“If they were truly an enthusiast of Ed and Lorraine Warren,” she said, “they would keep their peace — even in their passing.”

18 thoughts on “No trespassing signs, fines used to ward off curious souls in search of Warren’s Occult Museum”