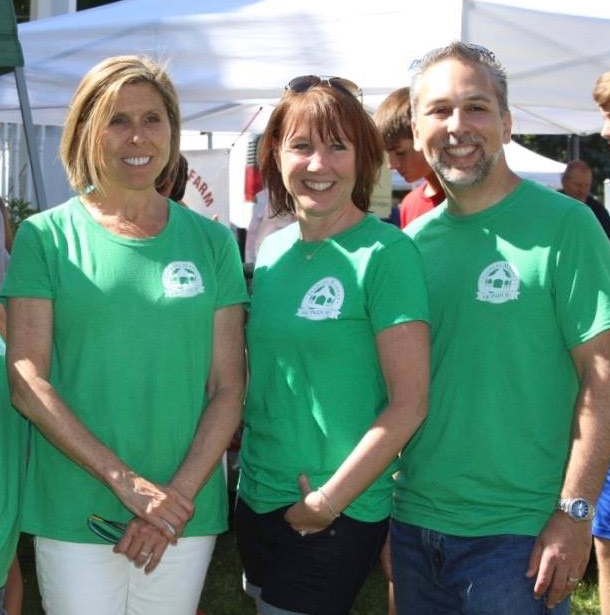 MONROE, CT — Keith Ciociola, who works in communications, remembers passing the farmers’ market on the Monroe Green, while driving to his Sandy Hook home after work years ago.

“I saw the signage in 2010 and it looked like they needed help with advertising,” he recalled. “The market had a bare bones website and didn’t have a social media presence. I wanted to share my talents, and develop a brand for the market’s advertising and messaging.”

Ciociola became a volunteer that year and later succeeded Sue Muro as market master in 2017. But after guiding the Monroe Farmers’ Market through a challenging season amid the COVID-19 pandemic last year, he decided to step down from the position.

Ciociola and his family made a decision to socially distance early on, so he worked remotely, recruiting more volunteers to assist onsite with curbside pickups and in-person shopping.

“I couldn’t ask people to do what I’m not doing,” Ciociola said. “The pandemic is not going away any time soon. I couldn’t devote as much time to it. I didn’t want to shortchange the vendors and customers or be overburdensome to volunteers.”

Kelly Plunkett, another longtime volunteer, announced Ciociola’s retirement in a post on the Monroe Farmers’ Market’s Facebook page over the weekend.

“Keith has spent his tenure doing everything possible to share this community wide gem with as many people as possible and we are forever grateful,” she wrote. “He has been an amazing asset, spearheading so much of what makes our market great and he will be sorely missed.”

Plunkett will serve as the new market manager this summer.

“She’s got a lot of work ahead of her, but she knows it,” Ciociola said. “She’s always willing to step up to a challenge. She’s very well known in town. She’s been involved in a lot of things over the years. I think she’ll bring a lot to the market.”

Ciociola said running a farmers’ market demands a lot of time and attention, even in the best of times, with unpaid volunteers dedicating up to 20 hours a week for 19 weeks, before shifting into planning mode for the next season.

Farmers’ markets bring healthy produce and goods that are locally sourced to the area. Ciociola said it is something shoppers can benefit from, while putting money back into their community, helping their friends and neighbors who are farmers and vendors.

“It’s a great cause,” he said. “Farmers’ markets in general are a great cause. Even though they are very well attended, all the markets in our area, it seems like there are a lot of people who don’t take advantage of it.”

While the fruits and vegetables are grown in Connecticut, Ciociola said food sold in supermarkets could come from tens to hundreds, to thousands of miles away.

“The aim of the market all along was to stay focused on its mission to support agriculture and Connecticut food related businesses,” he said. “We tried to curate vendors true to that mission, from farmers and bakers to jam makers.”

While many farmers’ markets are held in parking lots or an open field, Ciociola said Monroe’s setting, on a green with a gazebo, shaded by trees and surrounded by historic buildings and churches, gives customers a different feel.

“I made a lot of great friends and learned a lot from the volunteers at the market and I’ll miss that camaraderie and the weekly gathering,” he said, but added, “you can still take part in that as a customer.”

Plunkett said volunteers started planning the 2020 Monroe Farmers’ Market in late February when the COVID-19 pandemic hit and soon found it was not going away anytime soon.

“We thought we had to do an untraditional market and Keith came up with the idea of doing an online ordering only option,” she recalled.

Ciociola found a contractor to set up the ordering and payment on the Monroe Farmers’ Market website and, unlike other markets, instead of links to vendors sites, all of the shopping could be done in one place, according to Plunkett.

She said customers doing online ordering at other markets went to each booth to pick up their orders, while Monroe’s market had curbside pickup, in which customers drove onto Fireman’s Field, popped open their trunks and waited as volunteers loaded it with bags.

“He had to work with every single farmer and vendor to get their complete list of inventory, prices and pictures onto a website,” Plunkett said of Ciociola, adding of the vendors, “not all of them were web savvy. It was definitely a challenge.”

The market opened on July 11. Within four weeks, Plunkett said the Monroe Farmers’ Market was opened up to foot traffic, but volunteers also kept the online model for curbside pickup, which dropped from 200 orders a week to 25 as it was used primarily for convenience.

Though market was opened up to in-person shopping, Plunkett said volunteers monitored foot traffic and did counts, while reminding people about social distancing. “Everybody was great about it,” she said.

“It was quite challenging, because not only were we dealing with keeping the market open in a pandemic, initially it was fully online with touchless pickup before transitioning to a hybrid of both, we had to change locations,” Ciociola said. “It was hard. People didn’t know where you were. It was all done with an eye on having the safest possible experience for customers and volunteers.”

Kelly Plunkett and her husband Jim moved to Monroe 25 years ago and the couple now has two adult children.

“When the market first opened, I would go every Friday because I loved it and I saw my friends,” Plunkett recalled. “It was a social time for me on Fridays. Sue Muro said, ‘why don’t you be a volunteer? You’re here all the time.'”

Plunkett said she became a “green shirt” in 2008, the Monroe Farmers’ Market’s first year. She started out by helping vendors setup and answering customers’ questions. Then she went on to recruit others to volunteer.

Monica Brooks handles vendor administration and Kim Meachen handles booking of the entertainment. Aside from serving as market manager, Muro was in charge of the cooking demonstrations.

Plunkett became the children’s activities and special events coordinator for the family-friendly farmers’ market. Among the popular events were the Back to School Bash, the Harvest Festival and Pickle Fest.

After Ciociola was named market manager, Plunkett became his right hand in overseeing the market.

“I started the lemonade stand program, which allowed nonprofits and community groups to sell lemonade and prepackaged snacks to raise money and increase awareness of their organizations,” Plunkett said.

“A few years later, I added in children’s activities,” she said. “We always had coloring. We had sing-a-longs, art projects and crafts.”

Back on the green

Planning for this season’s Monroe Farmers’ Market got underway this week and Plunkett is eager to get the ball rolling.

“I’m excited. I’m hopeful we’ll be back on the green instead of Fireman’s Field,” she said. “A couple of new things are definitely coming.”

Plunkett said there will be an in-person market with entertainment. Amenities, such as curbside pickup, will be evaluated.

One of Plunkett’s new initiatives as market manager is the creation of a community advisory panel consisting of a farmer, a vendor, a volunteer, a member of the senior community, and two customers at large who have been coming to the market for years and could provide insight.

The Monroe Farmers’ Market was always booming, but attendance was low last season and organizers did not know why.

“One of our longtime customers said it was probably because our town’s average age is 55 and over, a third of the town, which is the high risk group,” Plunkett said of the pandemic. “I was bummed that I didn’t think of that, because I would have gone to the Senior Center and talked about it or we would have changed our marketing to show how safe the market was.”

She hopes the community advisory panel will keep organizers in the know going forward.

“Opening day is June 18,” Plunkett said. “I’m going to the Senior Center this month. I’d like to do a community wide survey to get some feedback too.”

The market’s organizers have already started booking entertainers, most vendors plan to return and Plunkett hopes to add a few more. The majority of the volunteers are also returning and she said positions will be found for them.

“We would like to add in some new things,” Plunkett said. “There’s plenty of delegation that will help make the market even stronger.”