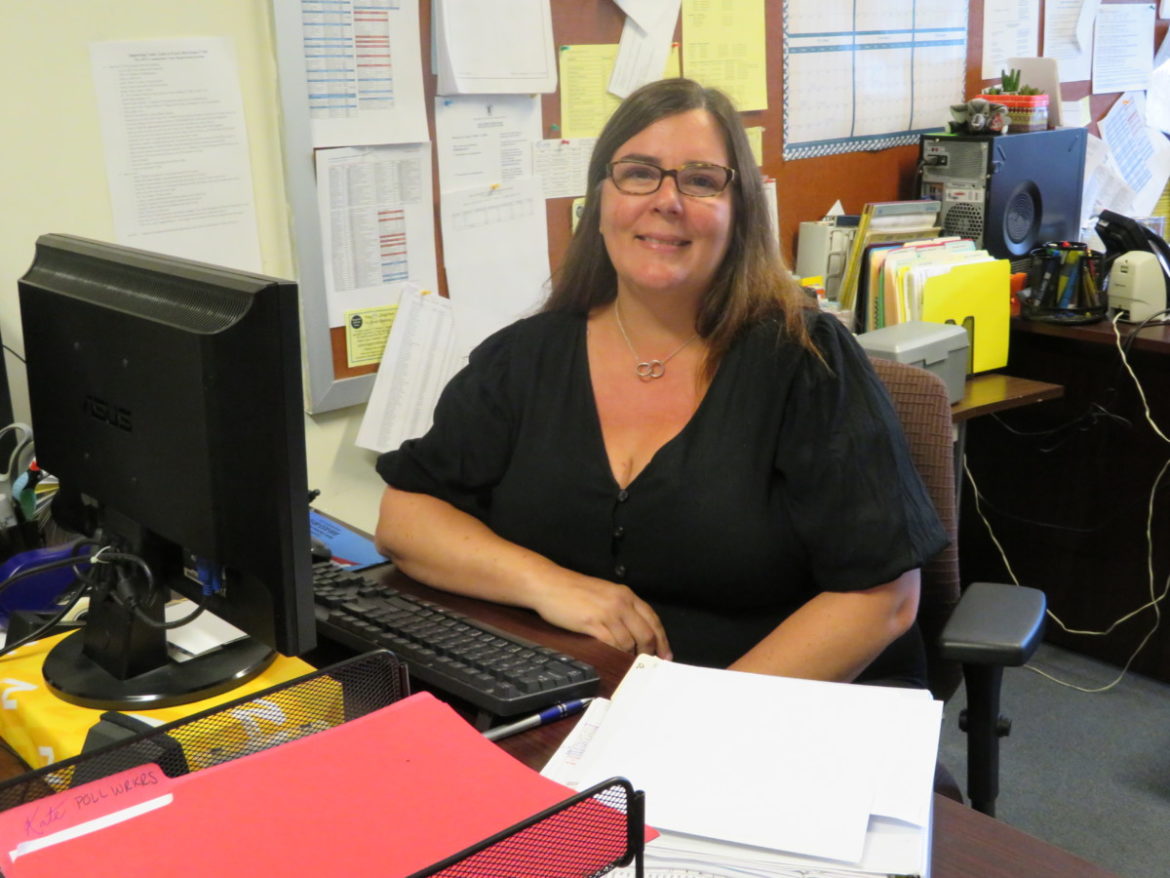 Monroe’s new Democratic Registrar of Voters Katherine Briggs had her first day on the job this Tuesday, and she will work plenty more as the Presidential primaries and the municipal election draw closer.

Briggs, a married mother of three, is an active volunteer for Monroe Congregational Church, the Stepney Elementary School PTO and the Monroe Newcomers & Neighbors Club. She and her husband, Tom, moved to town from Hartsdale, N.Y., eight years ago.

“We love it here,” Briggs said. “We couldn’t have a better town to raise our family and be involved in the community.”

Briggs said she and her husband were attracted to the quality of Monroe’s schools, its parks and the sense of community the town offers.

The couple’s oldest daughter, Mia, 14, is a student at Masuk High School, their son, Adam, 10, is in the Science Technology Engineering and Math program at Jockey Hollow Middle School and their daughter, Lily, 4, attends kindergarten at Stepney Elementary School.

Briggs is the former Stepney PTO president and current treasurer. The Monroe Democratic Town Committee chose Briggs to fill the registrar of voters role vacated by Jamie Campbell after interviewing her and several other candidates.

“I’m very interested in giving to my community and this is a new and interesting way to do that,” Briggs said.

Briggs said her parents were unaffiliated voters, while she grew up in South Windsor, but added there were Democrats on her father’s side, where her grandfather was a union leader.

“I’ve always been interested in politics,” said Briggs. “I’m definitely more socially liberal, so being a Democrat was a more natural leaning for me.”

Among the politicians she most admires are former President Barack Obama, who she said she finds inspirational, and former Secretary of State Hillary Clinton.

Briggs earned a degree in government and international relations from Clark University in Worcester, Mass., and had studied abroad at the London School of Economics for a year. That’s where she met her husband, Tom, who grew up in England.

Learning on the job

Briggs will work closely with Deputy Democratic Registrar of Voters Gary E. Zenobia. “He’s a great guy,” she said. “He’s a fun guy to work with and good at what he does.”

Briggs was trained over the summer by longtime Democratic registrar, Susan Koneff, who was serving as the interim registrar following Campbell’s resignation. “She was great,” Briggs said. “She is super knowledgable, a wealth of information for training.”

“I’m very excited to have her,” Villani said. “I think she’s going to be terrific.”

Briggs must participate in eight training sessions with the Secretary of the State’s Office and pass a test at the end to earn her certification. So far, she completed one session.

Registrars must perform administrative tasks for voter registrations and run the elections, from sealing the voting machines before a vote, to staffing the polls and training the moderators and workers.

In January, the Monroe Registrars of Voters will embark on an extensive canvassing project to ensure the voting rolls are up to date.

As a Monroe registrar, Briggs said she wants to help grow the voter rolls and to play a role in increasing voter turnout at election time.

“Whether they be Democrat or Republican, I think it’s important to participate in the electoral process,” she said. “I’m looking forward to the election.”