The 170-foot-tower is most visible in this computer rendering, based on a balloon test. This view is 0.12 miles from the proposed site. Virtual Site Simulations LLC

MONROE, Conn. — A wireless company wants to construct a 170-foot telecommunications tower on town-owned property behind the Chalk Hill building.

First Selectman Ken Kellogg said it would replace AT&T’s existing cell on wheels unit, which has been at Fawn Hollow Elementary School since 2012 and provides coverage for the surrounding neighborhood.

“As this is proposed on town property, a future lease arrangement would be presented to the Town Council for approval, which would generate revenue to the town,” Kellogg said. “Furthermore, the town would benefit by relocating certain public safety communications equipment to the new tower.”

The new tower, to be constructed by ARX Wireless, LLC, would allow for multiple carriers and improved service throughout the neighborhood, according to the first selectman.

AT&T would relocate its equipment to the new tower and ARX said the proposed tower would replace the existing municipal tower at the fire department.

Last Monday night, the Town Council unanimously approved a resolution referring the proposal for the municipal lease and use of a wireless telecommunications tower at 345 Fan Hill Road to the Planning and Zoning Commission for its review and report. 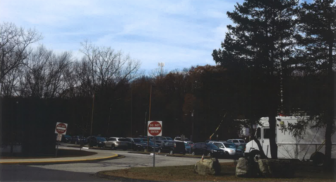 The 170 cell tower is much less visible in the computer simulation, 0.23 miles from the proposed site. This is a view from Fawn Hollow Elementary School. Virtual Site Simulations LLC

“Prior proposals for a new tower considered construction at 54 Jockey Hollow Road,” Kellogg said of Jockey Hollow Firehouse. “However, those plans resulted in tower locations that were extremely in close proximity to residential properties. Alternate proposals placed the tower much closer to Fawn Hollow and Jockey Hollow schools.

“In response to my request to locate any new tower to be as least intrusive as possible,  the tower would be located roughly 400 feet to the northwest of the Chalk Hill building.”

Councilwoman Dee Dee Martin asked about the proposed tower’s proximity to the nature trail behind the Chalk Hill building.

“I was told it would not interfere with the nature trail,” Kellogg said. 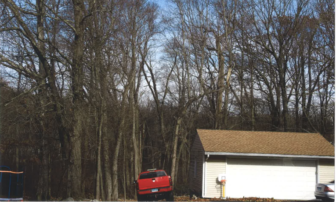 It’s hard to see the cell tower in this simulation from 0.21 miles south of the proposal site, as viewed from 58 Chalk Hill Road. Virtual Site Simulations LLC

David Archambault, vice president of sales and business development for Virtual Site Simulations, LLC, made a presentation showing computer renderings of how the tower would look from different distances in town, as well as the wider area of coverage it would provide.

He said there would be no visibility of the equipment at the base of the tower, which would be in a fenced in area with an access road. The cables would also be obscured from view.

A balloon test was performed, followed by computer renderings made by Virtual Site Simulations showing how the tower would appear in different locations and distances.

In his presentation, Archambault showed how the tower was most visible close to the former Chalk Hill School, but harder to see over the trees in other locations like Fawn Hollow School and the 50-block of Chalk Hill Road.