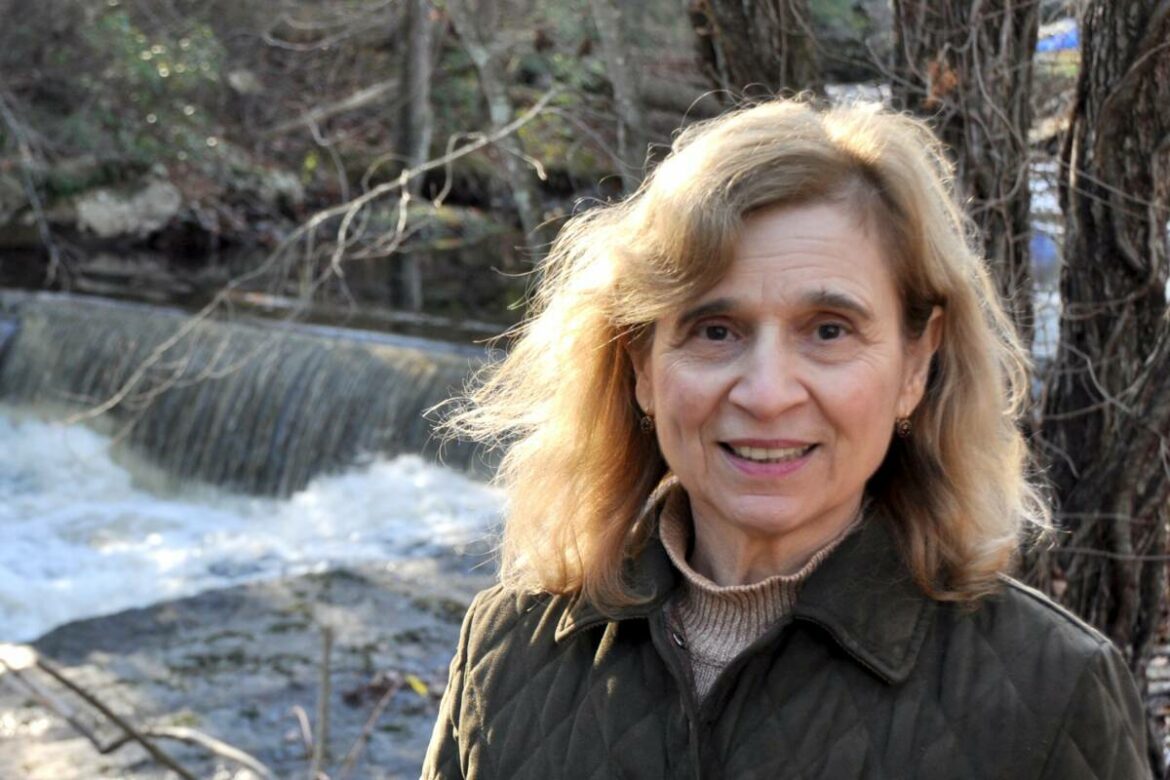 This photo of Nancy Zorena was used to dedicate both volumes of "Monroe Though Time" to her in honor of her advocacy for Monroe history.

MONROE, CT — Nancy Zorena worked tirelessly to preserve Monroe’s history, often living it by wearing a Colonial dress and bonnet and teaching a class at the East Village Schoolhouse for the Hands on History Camp she founded.

The former Stepney Elementary School teacher was honored as a Teacher of the Year. The longtime president of the Monroe Historical Society was also recognized for her many contributions to the community by being named Monroe’s Outstanding Citizen in 2016.

Last week, Zorena succumbed to a brain tumor at age 76, after a long, courageous battle. She leaves her husband, Brian, and their daughter Katie.

Kevin Daly, the Monroe Historical Society’s historian, described Zorena as a quiet, friendly woman who inspired others through her actions.

“She was a huge loss,” Daly said. “Nancy just had her own way. She was not at all aggressive. She was an angel.” 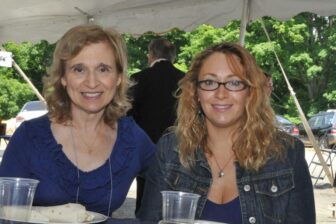 Nancy Zorena, left, with her daughter, Katie, at the book release party for “Monroe Through Time II” at The Castle. Photo by John Babina

Zorena and her husband moved to Monroe from Hamden in 1974 and lived in an historical house on Monroe Turnpike.

A former neighbor, who asked not to be identified, first met Zorena as members of the Monroe Junior Women’s Club.

“Our neighborhood used to get together a lot,” she recalled. “She was a good a cook. I always looked forward to whatever she brought to potlucks. Brian was a good cook too, so whatever they brought, I would go there first.”

“She was involved in everything in town, so many activities in town,” the neighbor said of Zorena. “It’s funny because I often wondered if she had a secret way to add hours onto her day, because she accomplished so much.”

“What’s really important is the untold numbers of children and adults she touched, and that is her legacy — and you really can’t ask for more than that,” she said.

As president of the Monroe Historical Society from 1986 to 1990 and 2004 to 11, Zorena was instrumental in the preservation of iconic Monroe buildings, including the Beardsley Homestead (circa 1780), the Meeting House (circa 1811) and the East Village Schoolhouse (circa 1790).

She is also credited with conserving the society’s collection of antiquities and artifacts. 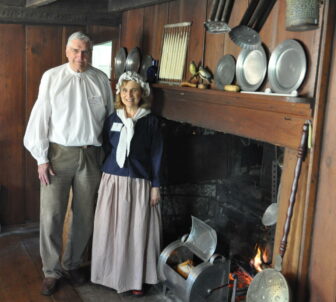 Ed Coffey with Nancy Zorena by the fireplace during an open house event at Beardsley House. Photo by John Babina

“Nancy was a wonderful person and a very dedicated member of the Monroe Historical Society,” Coffey said. “She volunteered countless hours to the society. My wife, Marcia and I enjoyed working with her over the years on many MHS projects and fairs. Nancy was always hard-working and incredibly helpful.”

“Nancy and I shared a common bond — we were both teachers and passionate about the history of Monroe,” Coffey said. “My favorite memories of her are when she welcomed children to the society’s properties such as classes at the schoolhouse or the Hands on History program in the summer at the Beardsley House. Her love for the town of Monroe and teaching were evident in these programs.”

A force for good 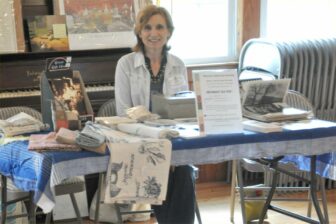 Nancy Zorena works at booth for the Monroe Historical Society during the Harmony Grange Fair. Photo by John Babina

Monroe Through Time II is dedicated to Nancy Zorena, president of the Monroe Historical Society in 1986-90 and 2004-11, a relentless advocate for preserving the fabric of Monroe’s past. Inexhaustible of patience and non-judgemental in motivation, always sensitive and unfailing understanding, the inspiring embodiment of volunteerism and all the qualities that make us better people.

“She was so instrumental in promoting the history of the town, I thought it was appropriate to have a dedication to her,” Moss said. “She was a real force for good in the community in a whole range of activities over many years, and one of the kindest hearted people I ever met. There was not a malicious bone in her body. I was sorry to hear about her passing.”

“She epitomized everything that is good about Monroe,” Moss added, “and her interest in the community went far beyond the Historical Society. She was interested in everybody in the community, a very, very dear, kind hearted person. She was exceptional.” 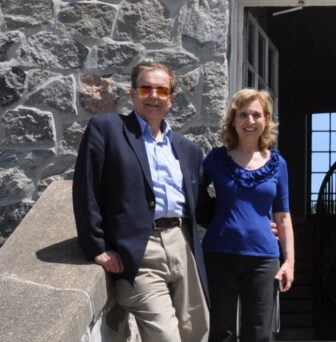 John Babina, left, with Nancy Zorena outside The Castle during a book release event for “Monroe Through Time”.

Babina, who took photos for the “Monroe Through Time” books, said Zorena always stepped up when Connecticut held statewide programs on historic buildings, putting on her outfit as a schoolmarm from the period of the one-room schoolhouses.

“She would have people sitting at desks with quill pens and playing outside with the old period games, like ring toss catch on a stick,” Babina recalled.

Zorena participated in historic house tours, promoted the Historical Society with a table at the annual Harmony Grange Fair, organized a trail of Christmas fairs and Babina remembers when Zorena ran a projector for a showing of the movie, “The Great Train Robbery” at the Monroe Senior Center following a Rail Trail tour.

“She was a very kind, quiet, friendly person, so she had a huge popular following,” Babina said. “She was one of the people everybody loved.”

“Nancy was wonderful,” said Karen Cardi, president of the Monroe Historical Society. “Her dedication to the society and our town was truly a gift of love. She was so very passionate about sharing her knowledge of the history of, not only our town, but of days of old.” 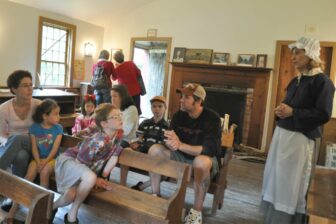 Cardi fondly recalls working with Zorena, as she led a group of children in the Hands on History summer workshops, teaching them how townspeople did weaving, baking, reverse glass painting, candle making, braiding of rugs, tin punching, writing with feather pens — always making sure the kids learned to make ice cream by hand.

“Nancy was always the first to volunteer for any society event and even spearheaded many of them herself,” Cardi said. “I will always have fond memories of her in full colonial costume walking the length of our town’s parade route on Memorial Day! She was a treasure.”

A backpack drive in her honor 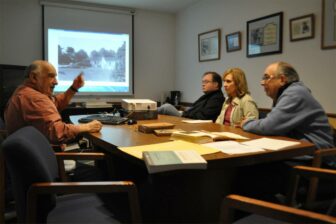 Bonnie Maur, a longtime teacher in town, was a close friend of Zorena’s. She is involved in a collection drive in her honor with a group of Zorena’s family and friends.

The group plans to donate backpacks filled with school supplies to Monroe Public Schools, to be given to students in need.

“She was all about teaching and all about kids, so we felt if we were going to do something to honor her, that would be the way,” Maur said of Zorena.

Superintendent of Schools Joseph Kobza said the district will gratefully accept the backpacks. 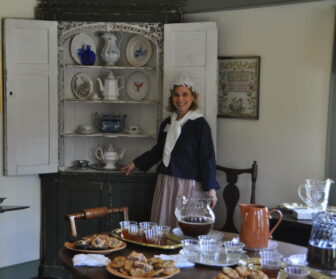 “Nancy was such an ambassador for the town of Monroe,” he said. “She was a Teacher of the Year, Monroe’s Citizen of the Year and president of the Historical Society. I have fond memories of her as my science teacher at Stepney Elementary School.”

“Nancy Zorena was a close friend for more than 40 years,” Maur said. “I always admired her for her commitment to children, to education in general, and in this town, to the community she so loved. I will always miss her for her love and kind nature, and for her commitment to her friends and family. Her love of lifelong learning will always be an inspiration to me in my life.”