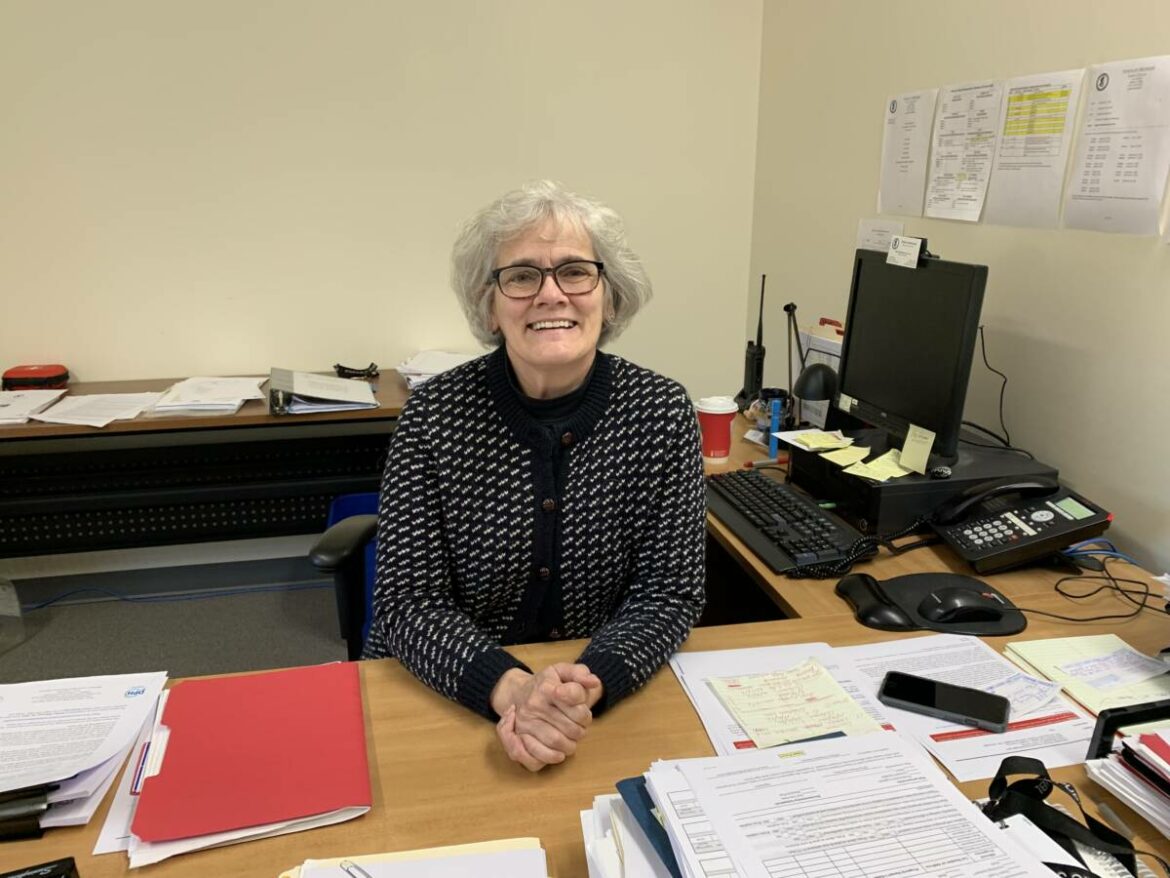 Nancy Brault was the first health director to sit at this desk, since Monroe became an independent department again, after breaking away from a joint health district with the town of Trumbull seven years ago.

MONROE, CT — Nancy Brault’s first job in public health was at the Middletown Health Department, helping people with public housing issues ranging from drafty old windows, cockroach and rodent infestations, to backed up toilets and a lack of heat during cold weather months.

“I saw a lot of poverty and I was able to do the most good for the community,” Brault recalled. “It was hands on. I would do housing surveys, visit apartment buildings and work with property owners.”

She encountered some bad apples among landlords who only cared about collecting rent, and tenants who would destroy their apartments. There were also conscientious people on both sides, according to Brault.

“I ran into someone at a restaurant in Portland,” Brault said. “She said, ‘I recognize you.’ She was a tenant who lived in Middletown. I made an impression on her life 25 years ago. Sometimes the little things you do in your life can make a big impact on other people’s lives.”

“To do a nice thing, we don’t realize the impact,” she added. “It felt wonderful to have that person thank me after all those years. I didn’t think I did anything earth shattering.”

Brault, 62, recently retired as Monroe’s health director after a 33-year-career in public health. Her last day was Nov. 30. She said she plans to continue leading a life of service. The Portland resident currently serves as a member of her town’s Conservation Commission.

Brault will work for the town part-time until her replacement is found, according to First Selectman Ken Kellogg, who has already been interviewing candidates.

“Nancy has been with us for several years, and is our first director of health since the Monroe Health District was restored following the dissolution of our former health district,” Kellogg told the Town Council at a recent meeting. “Nancy was integral in building the structure of our new department.”

“Nancy and her team also provided public health leadership during an historic pandemic, and I am grateful for the many, many hours she contributed during an extremely long and challenging response,” Kellogg said. “Please join me in wishing her luck in her future endeavors.”

Brault grew up in several places, but mostly in Hartford, where she graduated from high school. From there, she enlisted in the Army.

“In the service, I was a medical lab technician at Martin Army Community Hospital in Fort Benning, Georgia,” she recalled. “Then in Landstuhl, Germany, I was attached to the 10th Medical Lab.”

Brault served for three years, before enrolling at the University of Bridgeport, where she earned a degree in art. Brault said she loved photography and wanted to get into advertising, but did not realize she needed to go to New York and have the money and connections to succeed.

“Who can afford that?” she said. “I was a starving artist and got back into public health.”

“I think the most enjoyable thing was educating the public on health matters,” she said of the experience.

Brault went on to work in the Northeast District Department of Health in Danielson, Conn. “We took care of 12 towns and would inspect the Woodstock Fair,” she said.

Brault’s next stop was at the Central Connecticut Health District in Wethersfield, which served four towns.

“I was acting and interim director and the chief of environmental health for nine to 10 years there,” she said.

Then the town of Monroe gave Brault the first opportunity to be the health director outright. She has served in Monroe for seven years.

Monroe had just left a joint health district with the town of Trumbull, so Brault set up all the procedures and policies, and led the completion of the strategic plan for Monroe’s independent department.

Power outages are common in the heavily treed town of Monroe.

“On occasions when the power would go out, I was going out with the sanitarian and making sure restaurants were closed and their food was safe. They had to throw their food out if there wasn’t a generator,” Brault said.

During her time in Monroe, Brault said she did a lot of routine food service inspections and septic inspections.

“Then COVID hit,” she said of the pandemic. “We worked with the Medical Reserve Corps and Monroe CERT (Community Emergency Response Team). We set up COVID vaccine clinics, first in the Town Council Chambers of Town Hall, then at Masuk High School for the teachers, then at the senior center for our vulnerable senior population.”

After that, clinics were held at St. Jude Parish, 707 Monroe Turnpike.

“St. Jude was good to us and allowed us to use their facility,” Brault said. “We’ll always be thankful to them that they were here for us at this time of need.”

Throughout her time in Monroe, Brault said she also enjoyed working with health departments in other towns. “In public health, you can’t do it alone. You have to rely on your fellow colleagues,” she said.

Area health districts assisted each other with emergency preparedness, according to Brault, who said her department has done drills with Stratford, and Trumbull helped Monroe with vaccines.

“Overall, regionally it has been a pleasure to work with health directors in the region,” she said.

The most pride Brault said she feels over her time in Monroe was in getting the department up and running, she said, adding she also enjoyed working with her staff to provide town services.

The full-time chief sanitarian and full-time sanitarian positions have been open and Shaw has been “pinch hitting” until the openings are filled, according to Brault.

“I wanted our department to earn nationally accredited status through the Public Health Accreditation Board,” she said.

Despite putting together a strategic plan and meeting other requirements, the town has yet to apply for accreditation status.

“The important part is not having the plaque on the wall, it’s having those structures in place,” Brault said.

Brault, who listens to podcasts during her long commute, has always had an unquenchable thirst for knowledge.

“I’m a curious person by nature,” she said. “I’m learning Hebrew. Just pronouncing the letters is a challenge. I would really love to read Hebrew. Imagine reading the Torah in the original language?”

Brault grew up as a Christian, but goes to a synagogue in Glastonbury.

During a Trails Day at Webb Mountain Park, Barbara Thomas, chairperson of the Monroe Conservation and Water Resources Commission, inspired Brault to study gardening. Brault said she has been gardening her whole life, but learned she can use it to give back to the community.

“I want to take courses in the Master Gardening program,” she said. “It’s not just selfishness, it’s giving back. We’re so focused on making money. A lot of things that need attention don’t have the resources. When you can step up, you should volunteer your knowledge.”

Two years ago, Brault’s return to gardening began in her own backyard. She had her deck rebuilt and sat outside more, but all she had to look out onto were two patches of grass.

“I dug up all the grass and got wildflower seeds,” Brault said. “When they come up, you get all sorts of butterflies and it attracts birds. Now it’s a paradise.”