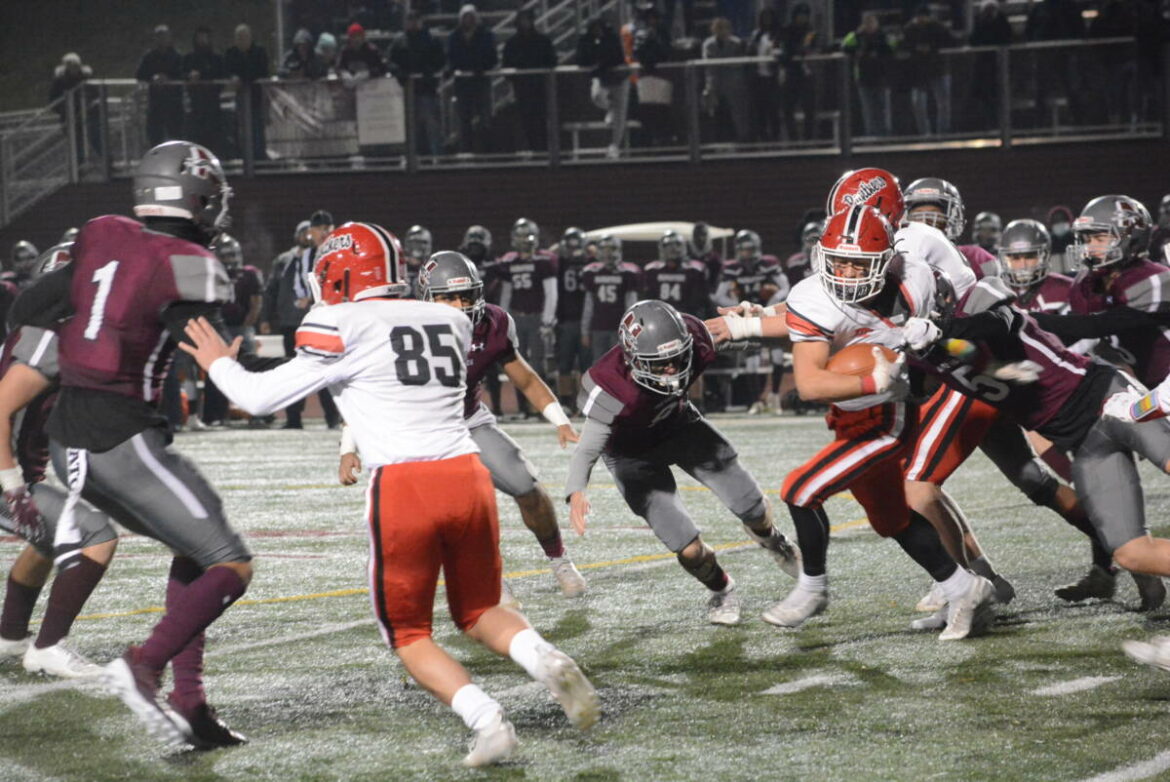 Justin Briganti fights for yardage on the ground in Masuk's 21-17 playoff win against Naugatuck Tuesday night.

NAUGATUCK, CT – The Masuk High football team’s offense came through with a trio of dramatic wins during the regular season. In the Class L State Quarterfinals at Naugatuck on Tuesday, the offense was clutch yet again and this time the defense had to prevail late in the game for the Panthers to pull one out. 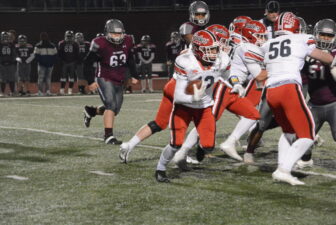 Nick Saccu was Masuk’s leading rusher, running behind key blocks from the Panthers’ offensive line for close to 200 yards and two scores.

Seventh-seeded Masuk got a late go-ahead touchdown from Nick Saccu then held off the second-seeded Greyhounds 21-17 to advance to the semifinals.

Masuk will visit No. 3 Maloney of Meriden, which is coming off a 49-14 win over No. 6 Bristol Central, on Sunday, Dec. 5. Kickoff is at 12:30 p.m. The winner advances to the Saturday, Dec. 11, championship round to take on either top-seed St. Joseph of Trumbull or fifth-seeded Windsor (site and time to be determined).

Saccu scored a pair of touchdowns and carried 18 times for 195 yards in the victory.

“Kids believe. And we have Nick Saccu – great combination!” Masuk Coach Steve Christy said. “He’s a great player but an even better kid and leader.” 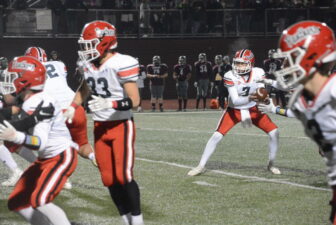 Masuk quarterback Dylan Jackson connected with Ryan Saccu for a 22-yard touchdown pass in the first half of Masuk’s 21-17 win over Naugatuck Tuesday,

The Greyhounds held a 10-7 lead at the half. Masuk quarterback Dylan Jackson connected with Ryan Saccu for a 22-yard scoring play through the air for Masuk’s first TD. Nick Saccu had a 60-plus yard TD run called back on a Masuk penalty.

Naugatuck’s Jeff Hall scored on a 29-yard pass from Jibree Bartelle, and Dom DeSousa kicked a 19-yard field goal for its first-half scoring.

Nick Saccu carried the ball 39 yards on the first play from scrimmage in the second half, setting up the Panthers at the Naugatuck 25 yard line, but the Greyhounds forced a turnover on downs at the 18. 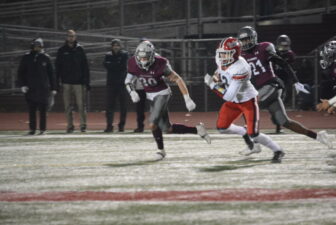 The Panthers’ Nick Saccu is off the races on a breakaway run against Naugatuck Tuesday.

A long, clock-eating Naugatuck drive culminated with Mike Deitlebaum’s 18-yard touchdown rush with 2:39 left in the third, and it was 17-7.

Masuk answered only 45 seconds later as Nick Saccu weaved in and out of would-be tacklers from 38 yards out to make it a one-possession game. Mike Epifano’s extra point made it a 17-14 game with 1:54 to go in the quarter.

Nick Saccu did a bulk of the work but rushes by others, including Justin Briganti and Lukas Shamas, kept the Greyhounds on their heels.

The teams traded punts early in the fourth quarter. Masuk’s go-ahead drive began at its own 26 with eight minutes on the clock.

Penalties haunted the Greyhounds late in the game. An encroachment call on third and one moved the chains and a horse collar penalty tacked 15 yards onto a Shamas run and set up the Panthers with first and goal to go at the nine yard line. 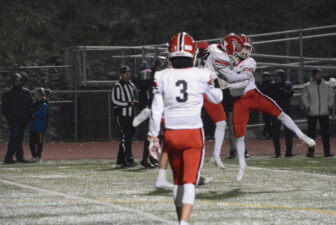 Nick Saccu, right, celebrates his go-ahead touchdown with Kyle Beckett as Evan Cronk (No. 3) looks on.

Still plenty of time for Naugatuck. The Greyhounds marched inside the red zone and had first and 10 at the 18. On third and five at the 13, Naugatuck stayed on the ground and came up short setting up fourth and three at the 11 with just over a minute remaining. An illegal substitution penalty pushed the Greyhounds back five yards.

They went to the air and an incomplete pass turned the possession over the Panthers with 1:03 to go. Masuk ran out the clock.

Notes: St. Joseph edged No. 8 Daniel Hand 21-20 in overtime and Windsor blanked No. 4 Cheney Tech 62-0 in other quarterfinal action.