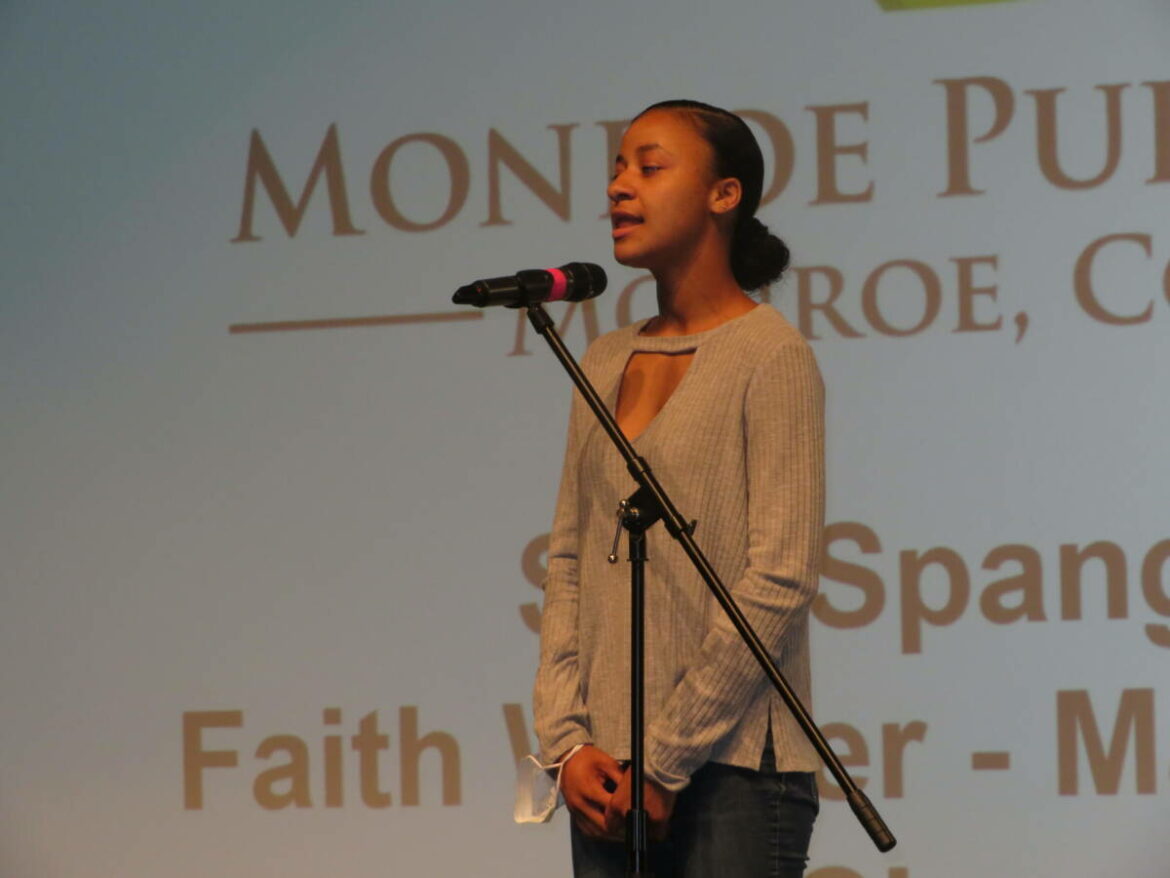 MONROE, CT — When members of Masuk High School’s Robotics Team 4478D, which had ranked fifth in the world out of 22,000 teams, decided to apply for an award, technology teacher Bill McDonough’s students did it on their own.

“They submitted it without telling me,” McDonough, Monroe’s reigning Teacher of the Year, told the audience of educators gathered inside the Masuk auditorium for Convocation Monday morning. 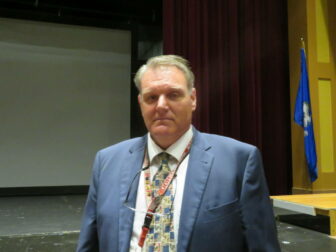 Bill McDonough, Monroe’s Teacher of the Year, was a featured speaker at Convocation, held inside the Masuk auditorium Monday.

“They sent an email telling me they won. I asked them why they hadn’t shared it with me and their reply was, ‘we knew we were gonna win. You told us you believed in us and now we believe in ourselves,'” McDonough said, choking back tears.

The theme of his speech was about social, emotional learning and promoting skills that transcend traditional grades and translate to success outside the classroom.

Convocation is like a pep rally for teachers and administrators before the start of a new school year. On Monday, it began with Max Harris, a Fawn Hollow Elementary School third-grader, leading everyone in the Pledge of Allegiance and Masuk senior, Faith Walker singing the “Star Spangled Banner”.

Monroe public schools welcomed its new teachers and named all of those who earned tenure. Superintendent of Schools Joseph Kobza gave a fond farewell to Bruce Lazar, the beloved principal of Stepney Elementary School, who recently retired. 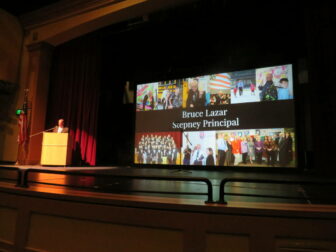 Superintendent of Schools Joseph Kobza gave a fond farewell to Bruce Lazar, who recently retired as principal of Stepney Elementary School, during Convocation in the Masuk auditorium Monday.

Debra Kovachi, the former principal of Monroe Elementary School, will serve as interim principal of Stepney this fall

Monroe Education Association co-presidents Nancy Zukowski and Sue Dixon took turns at the podium, praising teachers and students for how they adjusted to distance and hybrid learning during the COVID-19 pandemic.

Other speakers included Board of Education Chairwoman Donna Lane, who will not run for reelection. “The past 12 years I’ve been able to serve on this board has been an honor,” she said.

Lane shared how a Capstone project at Jockey Hollow Middle School this summer influenced her daughter, a Masuk senior, to consider becoming a child psychologist. Lane had told her daughter how she could be in a position to positively influence children’s lives, just as teachers do every day.

As an example, Lane said when her oldest daughter got engaged to her fiancé, a fellow Masuk grad, before planning their wedding ceremony the couple asked their favorite teacher, Spanish teacher Joel Castillo, to be the deejay.

First Selectman Ken Kellogg, who normally participates in Convocation, had another engagement and could not attend. But Kobza shared his positive wishes for the district. 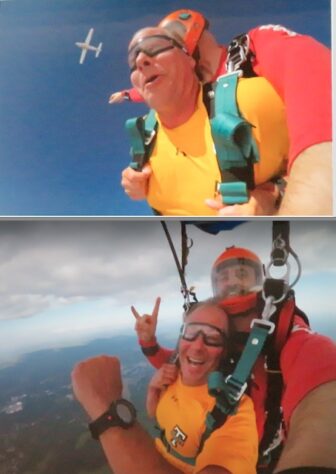 Superintendent of Schools Joseph Kobza, left, shared his first skydiving experience to illustrate how he will be right beside fellow educators as they navigate the 2021-22 school year on their way to a graceful, safe landing in June.

Kobza recalled a virtual professional development workshop featuring Douglas Fisher, a professor of educational leadership at San Diego University and author of “Rebound” and “Leading the Rebound”, which Kobza called, “two sources that serve as the playbooks for restarting teaching and learning and rethinking our schools while in the pandemic.”

“One piece in particular really resonated with me. We always emphasize having a growth mindset in education,” he said.

Rather than looking at the end of the school year negatively, Fisher expects to look at unexpected, unfinished and accelerated learning, according to Kobza.

Though Monroe’s students did not learn at the pace educators would prefer during the pandemic, Kobza said there was still positive growth, rather than learning loss.

Among the unexpected learning, Kobza said students gained a greater appreciation for being in school, experienced a great deal of independence, and learned to use resources other than teachers and text books, as well as sharpening their technological skills with Google Meeting and Zoom. 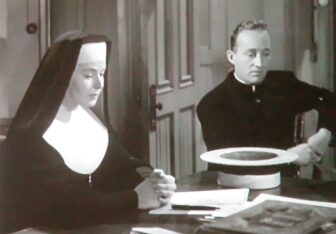 Ingrid Bergman, left, and Bing Crosby star in “The Bells of St. Mary”.

Teresa Gucwa Heines, the 2020-21 Teacher of the Year, introduced McDonough, praising him for setting up a student-centered environment.

Aside from sharing a video of his former Robotics Team, McDonough showed a scene from the 1945 film, “The Bells of St. Mary”, starring Bing Crosby and Ingrid Bergman, as an example of social, emotional learning.

In the movie, Sister Mary Benedict (Bergman) and Father Chuck O’Malley (Crosby) engage in a friendly rivalry while running a Catholic school.

In the scene McDonough shared, Benedict broke the news to O’Malley that she had to fail one of the girls for not meeting the academic standards. O’Malley was against the idea, expressing concern it would hurt the girl’s confidence.

He shared a story about a former classmate, Tommy Hathaway, who struggled in school and had to attend eighth grade three times. Though his grades were bad, he was good with his hands and built a sailboat.

“They felt sorry for him and decided to pass him,” O’Malley said. “From that time on he developed assurance.” Hathaway went on to start a sailboat building business.

“To this day, he takes care of the less fortunate, you know, those kids who always got a 99 out of 100,” O’Malley said. “Whenever they needed a job, they could always depend on Hathaway. He was a good man.”

“I ask, ‘what makes a great teacher?'” McDonough said. “Please take a moment to think about your favorite teachers. Why were they your favorite? I’m pretty sure it was not the quizzes or projects.”

“My favorite teachers brought their subject to life, showing passion, and gave me an example of lifelong learning in their classes,” he continued. “They showed caring for all their students.”

McDonough said his favorite teachers developed relationships of trust and, “most importantly, they believed in me and believed I could not only learn, but excel in their classes. There were many times I fell short of high marks in their classes. My teachers still believed in me and helped me understand that top marks are not the only way to navigate success beyond the classroom.”

“For all the challenges we face in our community, our teachers and students are continuing to do amazing things,” McDonough closed. “We all just need someone to believe in us and I believe in all of you.”