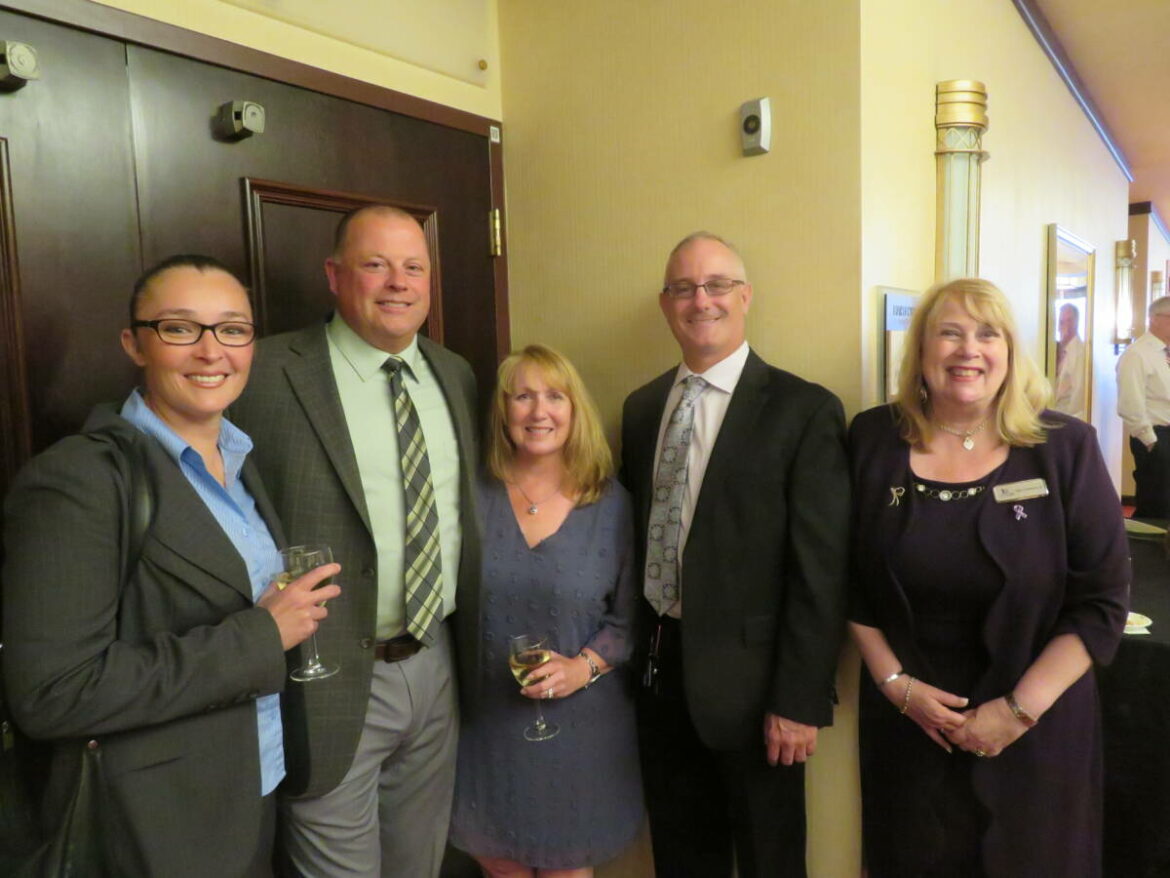 TRUMBULL, CT — Debra A. Greenwood, president and CEO of The Center for Family Justice, touted the nonprofit’s successes in providing services and safety for victims of domestic violence, sexual violence and child abuse during its annual meeting, held at the Trumbull Marriott Tuesday evening.

The dinner was called Celebrating the Faces of Hope, and Monroe was strongly represented among CFJ’s six member towns. Kathryn Maiolo, of Monroe, the retiring board chair, received a touching farewell and the Monroe Police Department was honored with the Partner of the Year Award.

“Every day, we collaborate with members of the Monroe PD to help give our clients impacted by domestic and sexual violence protection from abuse,” she said. “Every day they are the first responders our clients often call on when they are in danger or crisis. Law enforcement officers put themselves at significant risk to protect our clients.”

Though that is part of the reason for the honor, Greenwood said the Monroe Police Department took its support for CFJ’s youngest clients to the next level by holding a toy drive.

“They demonstrated they care about what happens to them after a crisis has passed and are committed to helping these hurting kids reclaim their health and wellbeing,” Greenwood said before the dinner. 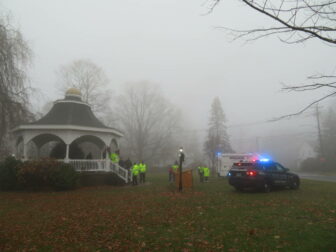 Cwikla-Masas said Monroe officers not only filled the town gazebo during their Stuff the Gazebo Toy Drive, they also filled their crime scene van with toys and other gifts, before delivering the haul to the center in Bridgeport.

“This effort helped us provide gifts to more than 280 kids this holiday season,” Cwikla-Masas said. “They’ve gone above and beyond to support our clients in the aftermath of abuse.”

She also singled out Det. Nicole Buckley for praise. Buckley, who serves on the Greater Bridgeport Multidisciplinary Team, organized events to inform the public about child abuse, prevention and trafficking during Child Abuse Prevention Month.

Cwikla-Masas said Buckley trains law enforcement and the public on child abuse, responding to disclosures, trafficking and a number of other issues.

“She also helps CFJ with client needs,” she said. “Just last week, we had a client who needed car seats. We said, ‘call Detective Nicole,’ and she came on down with our car seats.”

“We want to thank the officers of the Monroe Police Department, led by Chief Keith White, for recognizing that the trauma of abuse has a lasting impact and clients need support long after a police investigation has ended,” Cwikla-Masas said. “Personally, it’s very nice to have a member of our team who’s so dedicated and passionate and who we can call for anything.”

While accepting the award, White recalled a time when he was a young police officer and had to interview a five-year-old-girl, who was a victim of abuse at home.

“I was like, how can I do that as a young man interviewing this girl, when my daughter was the exact same age at that time,” White said. “I didn’t really know what to do.”

The State’s Attorney told White about a new program in Bridgeport with a new interviewing style and recommended that he and Officer Pete Howard bring the girl there. 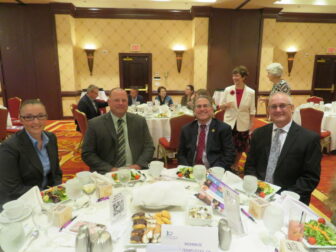 The program would later become The Center for Family Justice. White credited its members for the success of that particular case, and with assisting police in other cases over the years.

“I think you don’t realize the people you’re helping out are the police,” White said to CFJ’s volunteers, board members and staff gathered in the hotel dining room. “I’m not too sure what we would do in those scenarios.”

Monroe First Selectman Ken Kellogg, who attended the dinner, said, “I couldn’t be more proud of our police department for all they do. They go above and beyond.”

The first selectman also praised the people at CFJ. “What you all do, the impact of what you do is truly immeasurable,” he said. 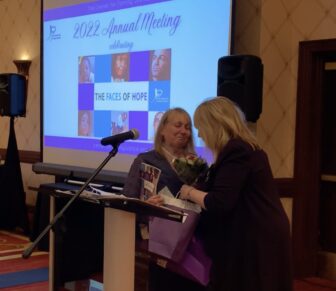 Kathryn Maiolo, left, receives flowers and a gift from Debra Greenwood, president and CEO of CFJ.

Kathryn Maiolo was recognized as her three-year tenure as CFJ’s board chair and decade of service as a board member concluded. Attorney Matt Reale of Trumbull will succeed Maiolo as board chair.

“Thank you from the bottom of my heart, because you have been an absolute rock star when it comes to leading The Center for Family Justice,” Reale said in a tribute video staffers made for Maiolo.

“If I can emulate half of what you’ve done, I know I will have done a fantastic job,” Reale said.

A domestic abuse survivor herself, Maiolo shared her story as a speaker at CFJ’s Speaking of Women event one year.

Greenwood fondly recalled getting to know Maiolo through the years and credited her for volunteering for many initiatives and events, at one time being recognized as CFJ’s Volunteer of the Year.

Maiolo ran support groups, helped start CFJ’s Risk Support Group and she is certified and trained to help clients feel comfortable to speak. She also helped spearhead the Monroe Advisory Council, leading all the way to Masuk, according to Greenwood.

The nonprofit used to be the Center for Women and Families of Eastern Fairfield County, before becoming Connecticut’s first family justice center in 2015. Greenwood said Maiolo was there every step of the way, helping with the transformation.

“She held every position on the board’s executive committee, working her way to chairman of the board of directors,” Greenwood said. “She has never missed a committee meeting.”

“She has helped us recruit and lead and tell our story,” Greenwood added. “She’s an incredible ambassador.”

Maiolo was honored by the Connecticut Coalition Against Domestic Violence as one of the “First 100 People” in the state of Connecticut who stand up against domestic violence and support the mission to eradicate it, Greenwood said. 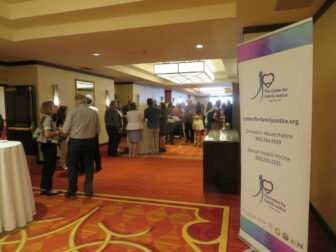 Dinner guests mingle before The Center for Family Justice’s annual meeting/dinner at the Trumbull Marriott Tuesday.

John Maiolo, Kathryn’s husband, also took a turn at the podium. He recalled how she came home one day and told him she wanted to volunteer at the rape crisis call center.

“Kathy got in there and did it and she hasn’t stopped since,” John said.

He shared a quote that reminds him of his wife’s strength and fortitude, which enabled her to put her abuser in jail: At any given moment you have the power to say, “this is not how the story is going to end.”

“That stuck with me,” John said. “Ever since I’ve known Kathy, she takes on anything put in front of her and her only goal is to pass on what she’s learned and who she is with herself, and her family, and with her friends.”

John said one of Maiolo’s biggest strengths is she will listen to you.

“She’s a great listener,” he said. “When someone is talking about their troubles, she listens. She doesn’t have to say anything. She assures you that whatever you’re saying, she understands.”

Kathy Maiolo’s daughters Marissa and Kelsey spoke in the tribute video, which had a cameo at the end from Lucy, her two-year-old-granddaughter.

Marissa called her mother an amazing role model who continues to inspire her. And Kelsey said she is proud of her mother for helping CFJ’s clients find their voice.

While seated at her table, Maiolo used a napkin to dab tears from her eyes. When it was her turn to speak, she deflected credit to others, including Greenwood for her leadership.

“Our staff has the best practices. We are the model that Connecticut now follows,” Maiolo said to cheers. “Our staff gives so much, because that’s who they are — and when you’re surrounded by people like that, you can’t not give.”

She said CFJ’s Camp Hope program will have 85 kids this year and noted how the center served 207 children this past year.

“You changed the lives of 207 young people who’ve been traumatized,” Maiolo said. “That’s why we are all here. It matters. It makes a difference.”

“I just want to say it has been an honor,” she said. “I have learned. I have been given gifts I didn’t know. As my daughter said, you helped me find my voice, so thank you from the bottom of my heart. And I will be back. I can’t leave. We’re hooked.”