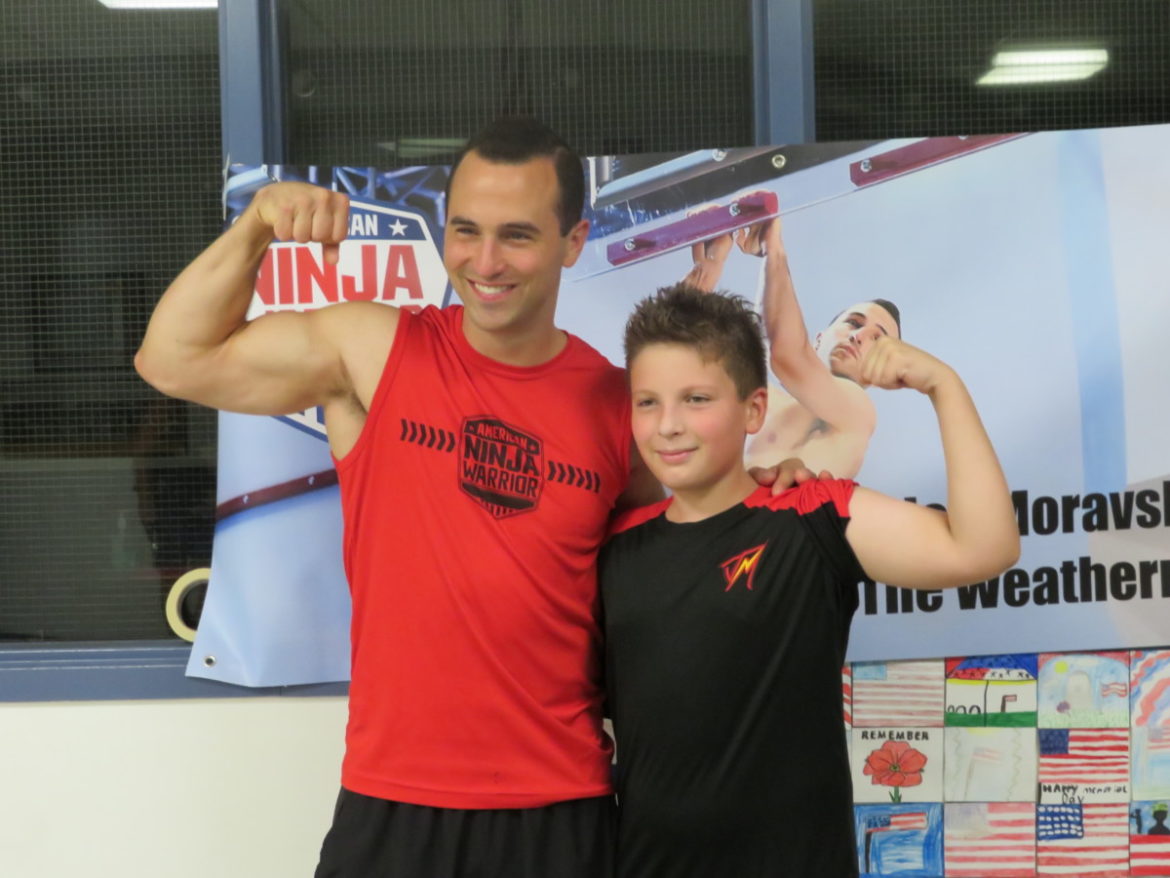 Joe Moravsky, a.k.a. The Weatherman, jumped, climbed and swung through the air to make it through formidable obstacles in “American Ninja Warrior’s” treacherous Stage 3.

Just one more obstacle to go and he would make it to Stage 4, where completion of a 75-foot rope climb within 30 seconds was needed to win the $1 million prize.

Hanging from a long cane of the obstacle known as Cane Lane, Moravsky glided through the course and had to propel himself to a fly bar and hook the cane onto it in mid-air, before swinging to a second fly bar and leaping down to the platform before the last portion of Stage 3.

The skin peeled back on one of Moravsky’s fingers earlier in the course and blood was showing. He looked at it several times, but gutted through the pain when he had to use the finger to help hold his entire body weight.

Moravsky flew through the air and the cane caught onto the fly bar, but it was on the outside of it, instead of the middle.

When he tried to pull himself up a little to get to the next fly bar, the cane slipped off and Moravsky fell, splashing into the pool below. 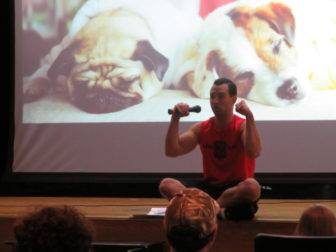 Joe Moravsky shares his experience on “American Ninja Warrior” with his fans during a viewing party inside the Jockey Hollow School auditorium Monday night.

The audience, gathered inside Jockey Hollow Middle School for a viewing party of the season finale of the popular NBC TV show Monday night, let out a collective, “ohhhh!

On the screen, a sideline reporter asked Moravsky if stamina was an issue in a course that placed heavy demands on upper body strength and wore down several of the 21 finalists as the course progressed.

Drew Drechsel and Daniel Gil were the only two to make it to Stage 4 and Drechsel won the million dollar prize. 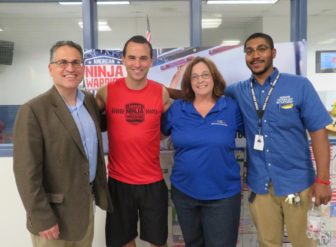 First Selectman Ken Kellogg, left, with, from right, Joe Moravsky, Parks and Recreation Director Missy Orosz and James Talton, who does IT for the town.

After Moravsky’s turn was shown on the giant screen inside the Jockey Hollow auditorium, the audience applauded their hometown hero.

Moravsky and his wife, Stephanie, a teacher at Fawn Hollow Elementary School, live in town with their two children, Emily, 3, and Jacob, 1.

“The world knows,” Moravsky joked, alluding to the fact that the results of the competition, which was filmed months ago, cannot be revealed to the public until the TV episodes air.

“When I landed, I saw it. The second I landed, I was like, ‘oh no,'” Moravsky said of Cane Lane, “and it was funny because I trained on that exact thing before. I was practicing going around a bar and landing on the outside, just like that, and then coming back. What? And that happens?”

Despite coming so close to winning it all, only to fall short, Moravsky, had made it further on Stage 3 than he ever had before and seemed at peace with the outcome.

“That’s just how it is,” he added. “At least I wasn’t failing because it was a strength issue and I think I’m okay with that.” 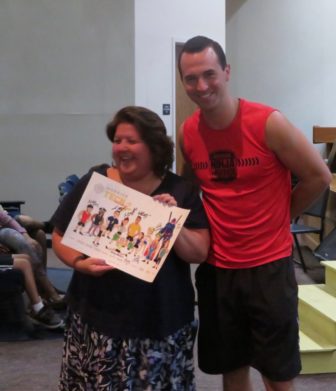 Tammie Anastasia of Shelton won the raffle for a picture of “America Ninja Warrior’s” biggest stars. She is congratulated by one of them, Joe Moravsky, at right.

Monday night’s event was the second “American Ninja Warrior” viewing party at Jockey Hollow. Both parties were organized by Missy Orosz, director of the Monroe Parks and Recreation Department.

The idea to have the events and allow the community to rally around their hometown athlete came about from a conversation with First Selectman Ken Kellogg and Moravsky at a Monroe Farmers’ Market this summer.

James Talton, who does IT for the town, set up the viewing for the big night.

Before the show, Moravsky mingled with fans, posed for pictures and sold his jerseys and posters.

A raffle prize was a cartoon picture of 11 stars from the show, including Moravsky. Several cartoons had the athletes’ signatures, including Adam Rayl, Ginny MacColl and Jessie Graff to name a few.

A portion of the proceeds will benefit the Monroe Food Pantry.

“We’ve made it. You’re here to experience it with me,” Moravsky told the audience before the show. “I grew up in Sherman and my wife has been here her whole life. I love it in Monroe. I love the area. I love you guys. I love the town and everything about it.”