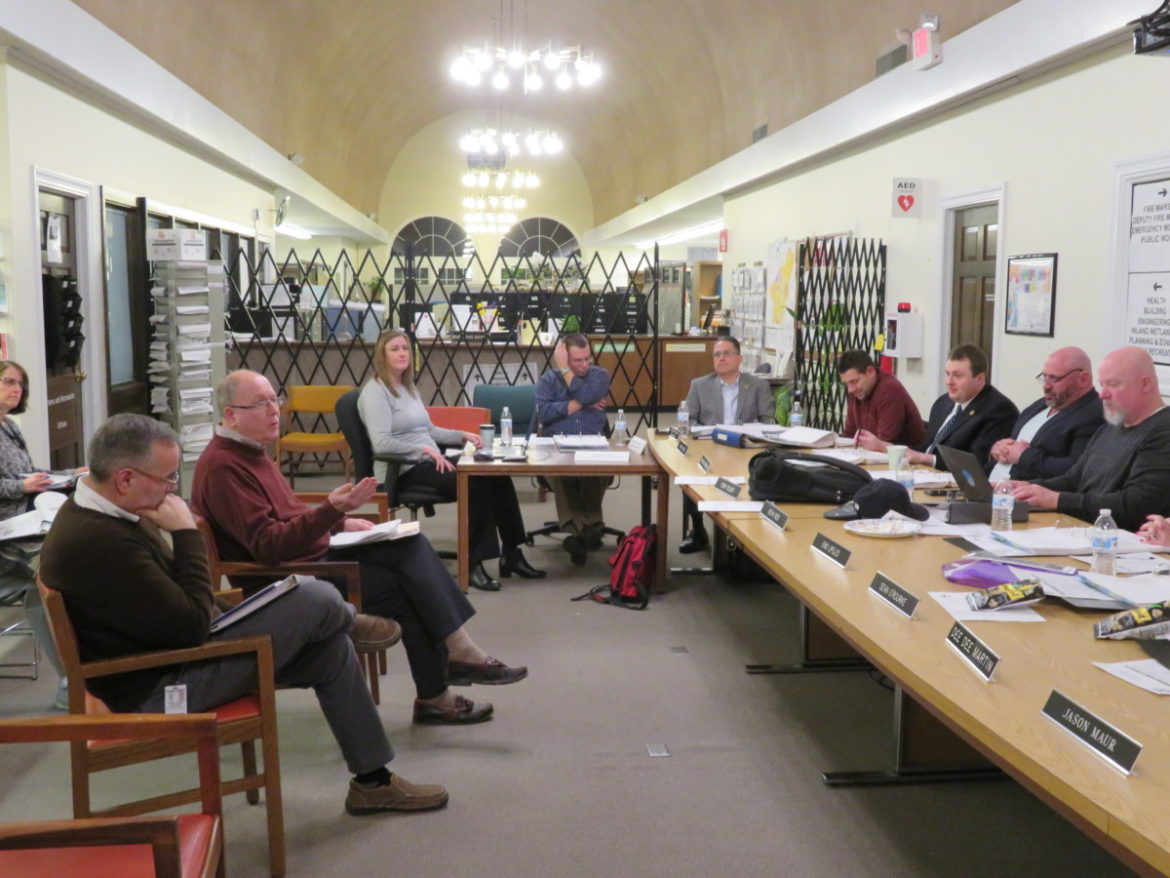 Completion of a building project for the Monroe Volunteer Emergency Medical Service, more programming for Edith Wheeler Memorial Library’s new makerspace and a continued focus on improving the town’s roads are all a part Monroe’s future plans.

Since First Selectman Ken Kellogg is only asking for a 0.6 percent spending increase in his $29.1 million budget for town services, the Town Council’s budget workshops are taking a broader view of town services.

On Wednesday night, the Council heard from the Parks and Recreation Department, the Planning and Zoning Department, EMS, the library and Public Works.

When Rick Schultz was hired as the town planner just over a year ago, he said Planning and Zoning Commission Chairman William Porter asked him to move unfinished projects forward.

“Work for Panera Bread could start as early as next week,” Schultz said of one of the projects.

The Panera Bread restaurant and a Noble gas station will be build in Towne Line Plaza at 205 Monroe Turnpike.

Schultz said the town’s land use departments are more user-friendly, leading to more occupancies of vacant commercial spaces in town.

A goal of the Plan of Conservation and Development, which is being revised and updated from the 2010 version, is to make the document easier to understand and follow, according to Schultz.

He said the zoning enforcement officer is making sure town zoning regulations are enforced appropriately, while being fair about it.

The town is also making progress cleaning up blighted areas, according to Schultz, who noted the old hot dog stand on Main Street (Route 25) will be demolished, because it is an old, dilapidated structure.

Parks and Recreation Director Missy Orosz said her department will focus on improvements at Lake Zoar, arranging events like a trivia night at Wolfe Park and putting up a safety fence at Field 2 along Cutlers Farm Road this year.

For future goals, Orosz said she would like to see a project for new playing fields at Wolfe Park move forward. But Kellogg said more work needs to be done, before that can happen.

Councilwoman Jennifer Aguilar thanked Monroe EMS Chief Donald Smith for all the volunteers do for the town, while responding to an increased volume of emergency calls.

When Councilman Jason Maur asked about any future changes that could save the town money, Smith said there is nothing like that.

Outside of the normal EMS budget, Smith said they want to complete a renovation project for the building at 54 Jockey Hollow Road and to continue with the ambulance replacement program.

“I’m real excited to get that going,” Councilman Terry Rooney, who is chairman of the EMS building committee, said of the renovation project. “You’re operating in substandard conditions.”

“This will be a boost in maintaining volunteers, while we attract new ones,” Smith said.

Council Vice Chairman Sean O’Rourke gave the council’s condolences over the loss of Marge Brenna, a volunteer of 31 years, as well as a CPR and first aid instructor, who died on Feb. 13.

“She was the longest serving member, who was still serving shifts,” Smith said. “It was very unexpected.”

Maur thanked Edith Wheeler Memorial Library Director Lorna Rhyins for the growth of the library, saying the areas offered have been “substantial and amazing.” He asked about long term needs for more growth.

“Now, we’re figuring out ways to offer more programs in the makerspace,” Rhyins said. “We’re finding creative ways to get money to offer that.”

Maur asked if the library needs more money and Rhyins said, “I think we’ll be okay this year.”

O’Rourke asked Rhyins if she’s able to operate the library efficiently with the budget the first selectman is proposing and she said yes.

Aguilar asked Public Works Director Chris Nowacki about the skyrocketing costs of recycling. Kellogg said it is a country-wide problem, but the town must continue to recycle because it is the law.

“Let’s talk snow removal,” Councilwoman Dee Dee Martin said to Nowacki, adding with a smile, “are you ready to be a weatherman yet.”

Kellogg said the town budgets for snow removal are based on a five-year rolling average. Though there has not been a lot of snow this winter, he said, “you’ve got to have a reasonable amount in the budget, because the opposite side isn’t a conversation we want to have.”

The rest of the discussion was about the road improvement program. Nowacki said the town performed paving treatments and repairs to seven miles of roads last year and is now around the four-to-five mile range, due to working on more roads with culverts.

Nowacki said most communities believe maintaining a Pavement Condition Index of 75 is fantastic.

Kellogg said the town will spend around $2.3 million on maintaining its roads in 2020-21 between bonding and grants, so Monroe does not plateau.