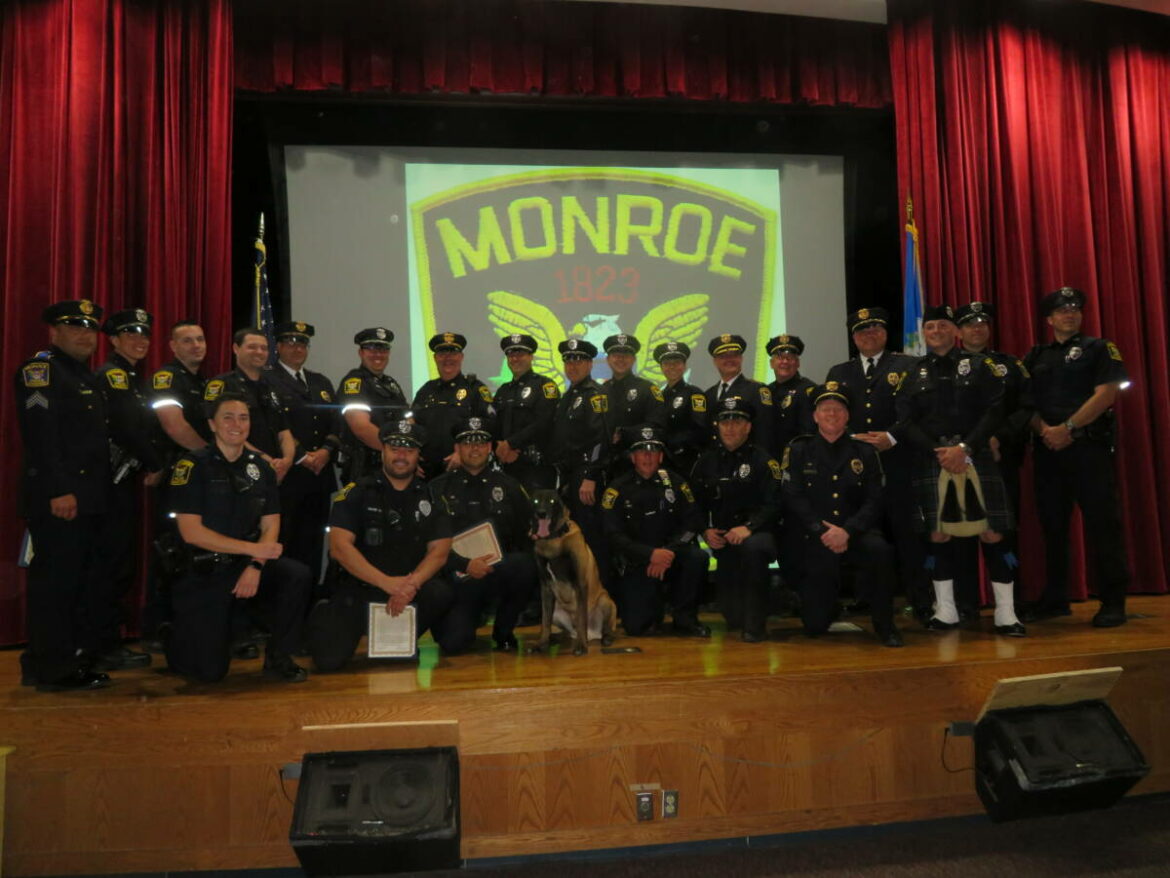 Over the past four years, this exemplary police work often went on with little recognition, especially after the COVID-19 pandemic shutdown the Monroe Police Department’s biennial awards ceremony.

The awards ceremony was back on Monday evening, when plaques, medals, ribbons and certificates were given out to officers in the Jockey Hollow Middle School auditorium to thank them for a job well done.

“It’s nice to get everyone together and celebrate our success after this long break,” Chief Keith White said, adding it is a good bonding experience for his officers.

Of all of the stories shared that night, White said the ones about police officers saving lives with CPR and by stopping bleeding are often overlooked by the public.

“A lot of people don’t realize we’re medical responders in town too,” he said.

First Selectman Ken Kellogg was unable to attend the awards ceremony due to other meetings at Monroe Town Hall that night, but he asked White to read a message on his behalf.

“First, I want to acknowledge Chief White, the command staff of the Monroe Police Department, and the Board of Police Commissioners,” Kellogg said. “Thank you for providing the leadership that continues to promote excellence in an outstanding department.”

“To the members of the Monroe Police Department, and to those receiving awards this evening – thank you for choosing a career in law enforcement, and thank you for choosing Monroe,” Kellogg continued. “The award recipients tonight are recognized for their excellence in their service to this community, and on behalf of all the residents of Monroe, I extend not only my congratulations, but my sincere gratitude. Thank you.”

The ceremony began with a processional by Police Pipes & Drums of Waterbury, followed by opening remarks by White. The National Anthem was sung by Audrey Lesko, a Masuk High School student.

Capt. Greg Smith announced the winners from the podium, sharing their stories. Then each officer walked onstage to receive their awards and pose for photos with Chief White.

Officers of the Year 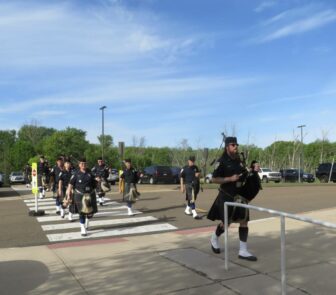 Among the highlights of the ceremony, Officer Michael DeCarli was honored as the 2018-19 Chief Jacob J. Tufano Officer of the Year.

DeCarli has been a patrol officer, a detective and is now a K-9 officer. Smith said DeCarli was active as a patrolman, leading the department in DUI arrests, and is an officer known for his positive attitude and drive to learn.

Officer John McAulay, an Army veteran, was honored as the 2020-21 Chief Jacob J. Tufano Officer of the Year.

Over his 10 years with the department, Smith said McAulay served many roles. He is currently a K-9 officer.

Sgt. Peter Howard, who is retiring this year after 27 years on the force, received the Community Service Volunteer Award.

Howard is credited for Monroe police officers’ expanded involvement in fundraising for Special Olympics Connecticut through events such as The Plunge at the Park, the Torch Run, Tip-A-Cop and Cop-on-Top. He even rappelled down the Mohegan Sun building in Uncasville one year.

Howard has won this award numerous times throughout his career, so from now on, Smith said it will be called the Sgt. Peter Howard Community Service Volunteer Award in his honor.

When Sgt. Helio Ramalhete and Sgt. Jeffrey Loomis responded to a motorcycle crash, Ramalhete quickly identified the need for a tourniquet to stop heavy bleeding from the driver while Loomis cared for the passenger.

Ramalhete may have saved the driver’s life by stabilizing his condition before treatment from Monroe Volunteer Emergency Medical Service personnel, then hospital staff.

For this, Ramalhete received a Life Saving Medal on Monday night.

Sgt. Ramalhete and officers Christopher Silkman and Jonathan Mendez responded to a domestic incident and were greeted by “an extremely hostile male” holding his three-month-old daughter at the door.

Mendez spoke to the baby’s mother at the scene and learned her husband had a loaded rifle inside the house.

The officers managed to get inside the house to check on the baby’s welfare, while Mendez gathered information. Then de-escalation techniques were used to ensure mother and child were safe and to arrest the father.

These officers received Special Recognition Certificates for the way they handled the call.

Several police officers worked together to break up an elaborate scheme in which criminals defrauded elderly women out of a total of $42,800, by telling them a loved-one was in trouble and needed money.

The officers tracked suspicious UPS deliveries made to Monroe addresses and their dogged police work led to arrests.

This is just one of several cases that led to the awarding of Meritorious Service Ribbons to:

2 thoughts on “Monroe’s Finest finally get their due”