MONROE, CT — First Selectman Ken Kellogg issued a CodeRed message to residents Friday, informing them of the worsening COVID-19 pandemic in Connecticut and the town of Monroe, which still has Red Alert status.

Monroe has had a total of 276 confirmed and 27 probable cases since the pandemic began, according to the Connecticut Department of Public Health. Its case rate continues to climb, along with cases in Fairfield County.

“Our two-week average daily case rate is now averaging 4.8 cases, which equals an average of 24.6 per 100,000 population,” Kellogg said in his weekly update. “In the past few days, DPH has reported over 10 cases per day in Monroe.” 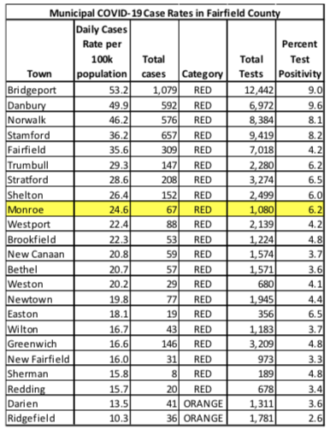 Though cases continue to impact Monroe’s public schools, the first selectman said the primary origin of the cases appear to be coming from infected family members and small social gatherings outside of school.

“We continue to see numerous ‘clusters’ of cases that involve an entire household,” Kellogg said. “However, due to the increase in cases in the community, all elementary schools will return to the original hybrid model on Monday.”

The state’s rolling seven-day testing positivity rate is 4.4-percent and the number of hospitalizations due to COVID-19 have doubled in the last two weeks, according to Kellogg.

He said 100 of Connecticut’s 169 municipalities are in the red category, representing over 80-percent of the state’s population. All but two towns in Fairfield County are red. The city of Bridgeport is currently experiencing the highest rate of infection in the state, Kellogg said.

“With Thanksgiving a couple weeks away, the state is reminding those who are traveling to remember the travel advisory rules regarding quarantine and testing, and to avoid quarantining with someone else at high risk,” he said.

Kellogg also reminds residents to avoid large gatherings and to remember the current state rule limiting private gatherings to 10 people. The state recommends that individuals over the age of 60 or with risk factors stay home as much as possible.

“We are aware that many testing locations in the region have become overwhelmed,” Kellogg said. “We have been, and continue to be, in regular contact with pharmacies, healthcare providers, urgent care centers, and the State Department of Public Health, to advocate for regular testing sites in Monroe.”

While these efforts are ongoing, Kellogg said testing locations can be found by visiting https://portal.ct.gov/prioritytesting.

“I thank everyone for continuing to follow the strategies to reduce transmission,” Kellogg said. “State public health experts advise that this may be just the beginning of a more significant resurgence that could continue over the upcoming months. Please follow the rules regarding masks and social distancing, and avoid unnecessary gatherings.”