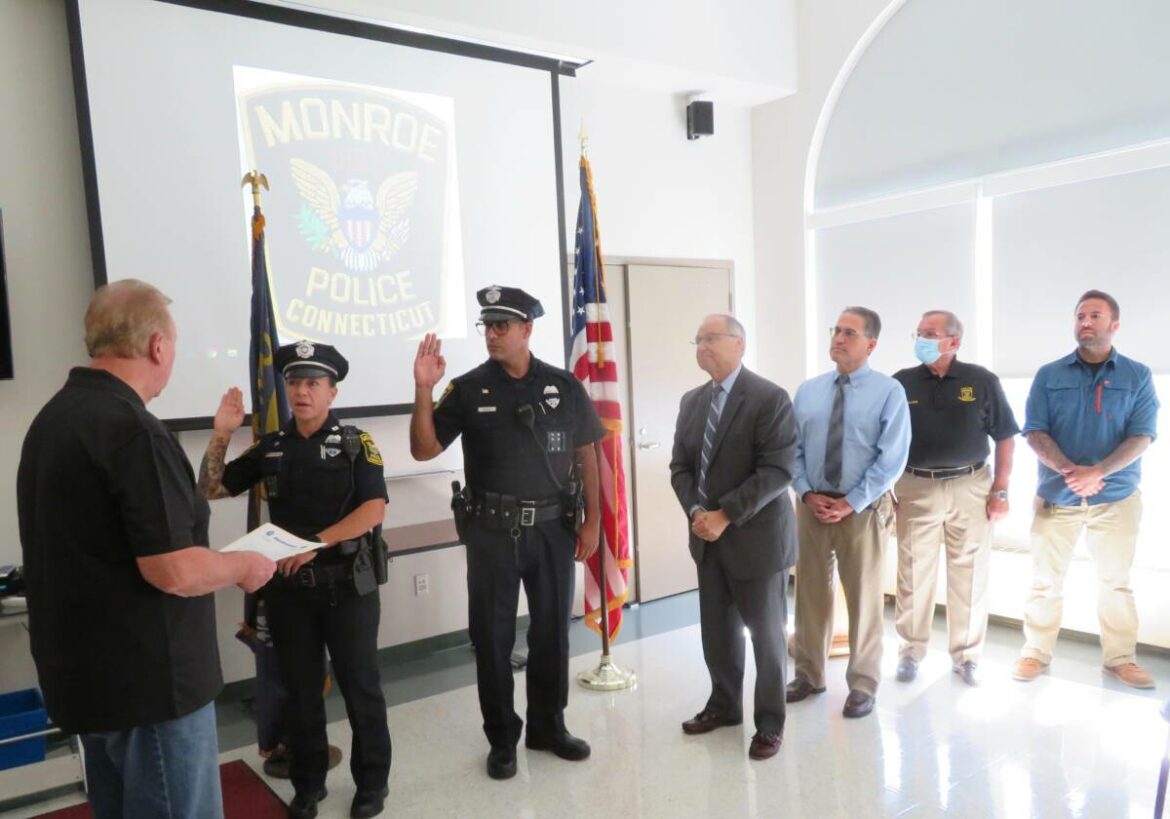 MONROE, CT — Police Commission Chairman Michael Vitello swore in two new police officers during a ceremony in the Monroe Police Department’s training room Tuesday afternoon. Stacy Cascante and Jonathan Mendez had both served as police officers for the City of Bridgeport for five years, before deciding to transfer to Monroe.

“On behalf of the department, we’re very happy to have you here and, conversely, I am very excited to have you both here,” Monroe Police Chief John Salvatore said after the officers were sworn in. “Not only do you fill some vacancies very quickly for us, but we have two competent officers with a lot of community service behind them already in their relatively short careers in law enforcement.”

Salvatore said the town now has 40 officers with another, Breann Joyce, going to the Police Academy in Meriden for training next week.

First Selectman Ken Kellogg, who attended the ceremony, thanked Cascante and Mendez for bringing their skills and experience to Monroe, as well as for choosing careers in public safety where professionals help people who are typically strangers and go towards danger when others move away from it.

“Thank you on behalf of the community for doing what you do and welcome to Monroe,” Kellogg said. “We hope you have many years of a wonderful career here.”

“On behalf of the Monroe Police Commission, we thank you for choosing Monroe,” Vitello said. “We’re glad that you’re hopefully going to finish your careers in our town — and we appreciate that. Thank you very much.” 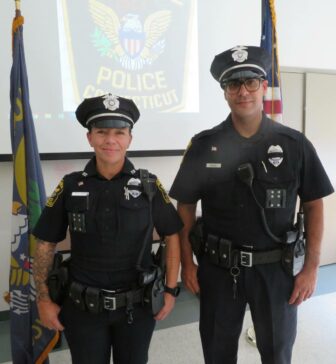 Stacy Cascante, left, and Jonathan Mendez are police officers who transferred from Bridgeport to Monroe.

“I was a school resource officer and did community service work in Bridgeport,” said Cascante, who lives in Milford. “Monroe is very family oriented and I feel it’s a really good fit.”

Cascante’s two children, Skyler, 17, and Hunter, 14, attended the ceremony, along with her mother, Nancy Bocketti, who made the drive from Massachusetts to be there for her daughter.

Bocketti said her daughter had interest from at least three or four police departments, “but she wanted Monroe.”

Mendez said he also served as a school resource officer and performed community policing in Bridgeport.

“I will do similar work in a similar department with more support,” he said of coming to Monroe. “This is the only town I applied for. I had my interview with them and I was lucky that they called me.”

Mendez said he expects to start out as a patrol officer in town, though he plans to spend some of his free time volunteering in the community. 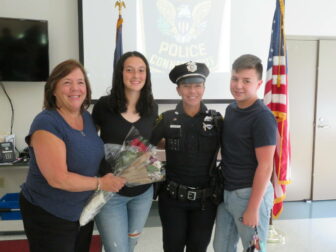 Stacy Cascante, third from left, was sworn in as a Monroe police officer Tuesday. Here she is with, from left, her mother, Nancy Bocketti, her daughter, Skyler, 17, and son, Hunter, 14.

When he was an officer in Bridgeport, he said the high call volume left him no time to talk to people after responding to a call.

“I’d rather have more of a connection with the community, than going right to the next call,” he said. “Here, we can talk and get deeper into the root of the problem.”