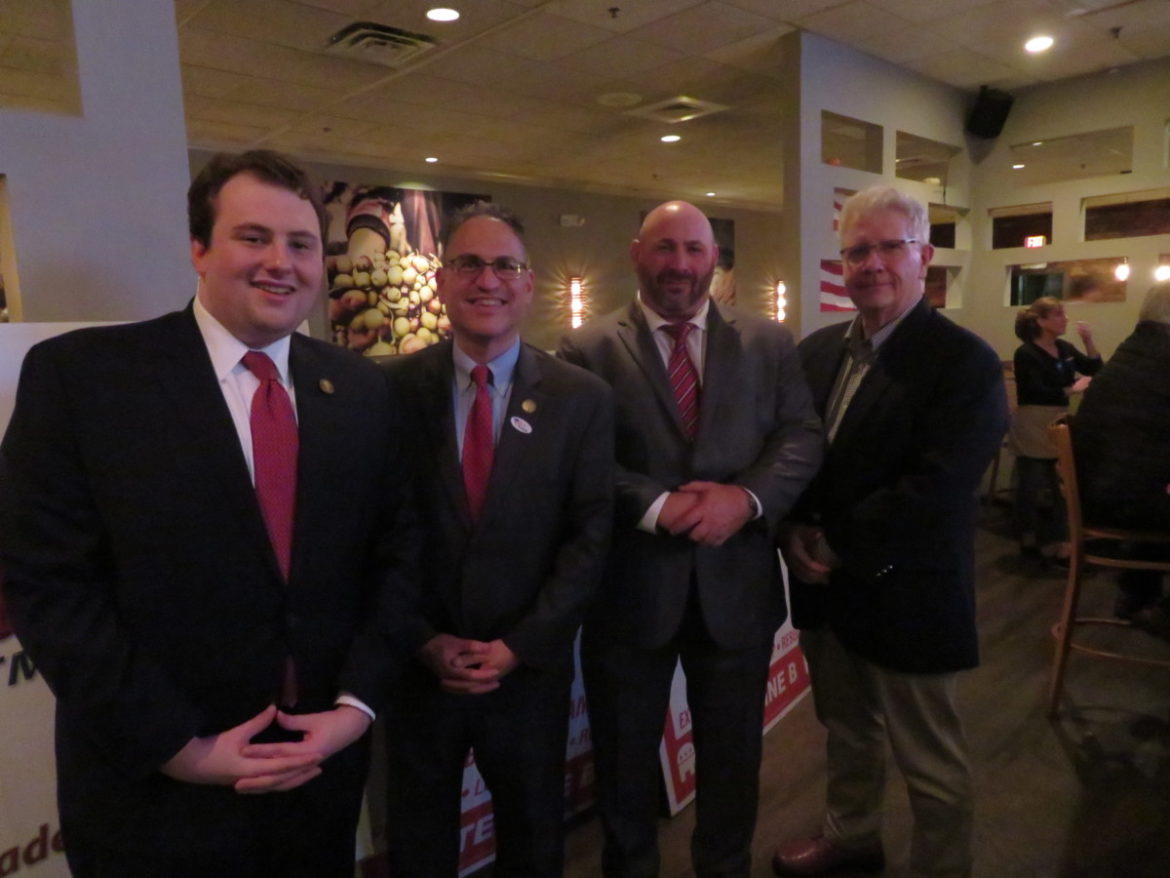 First Selectman Ken Kellogg, second from left, will enjoy another term with a 6-3 Republican majority on the Town Council. Three of Tuesday's winners posed for a picture with him at Carl Anthony's. From left is Jonathan Formichella, Terry Rooney and Sean O'Rourke.

First Selectman Ken Kellogg ran unopposed and his fellow Republican candidates won handily in Tuesday’s municipal election, maintaining a 6-3 majority on the Town Council. Town Treasurer Patrick O’Hara, the Republican incumbent, easily fended off a challenge from Democrat, Christa DeLeo, in the only other contested race.

“I’m extremely grateful to the voters of Monroe for demonstrating their confidence, not only in me, but the entire Republican team,” Kellogg said. “We’re working hard for all families in Monroe by controlling taxes, improving infrastructure, improving services and growing our economy.” 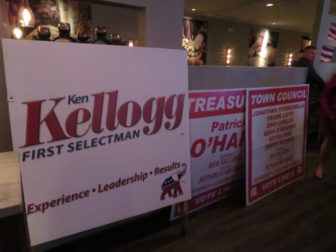 Elizabeth Edgerton, the Republican campaign manager, recalled being touched by the phone calls she took at the party’s headquarters earlier Tuesday.

“People were telling me how proud they were to have Ken as their first selectman and how they were urging their friends to vote Line B,” Edgerton said. “I never received calls like that. It made me feel good that we’re doing good work for this town.”

Of the election results, she added, “it was a successful night. I’m very happy. The voters have spoken and we’re grateful for their confidence in us.”

The mood in the parking lot at 406 Main St. was somber, as Democrats headed home from their gathering.

“We’re disappointed,” said Patricia Paniccia, president of the Democratic Town Committee. “We put a full, qualified slate up and were obviously hoping for a different outcome. All our candidates worked very hard. We used different methods to reach out to the voters. Going forward, we’ll make sure the Republicans live up to and keep all of the promises they’ve made.”

According to unofficial numbers from the Registrar of Voters Office, 4,211 of Monroe’s 13,200-plus voters participated in the election for a turnout of just under 32 percent.

“We’ve got to get more of a response from voters themselves, if we want positive changes in this town,” Paniccia said.

‘A great day for Monroe’ 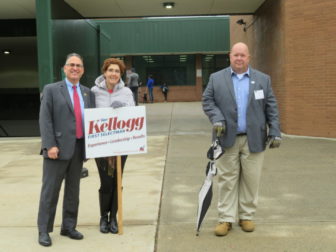 “Sixty-forty,” O’Hara said. “The results speak for themselves. I want to thank my family, my party and the voters.” 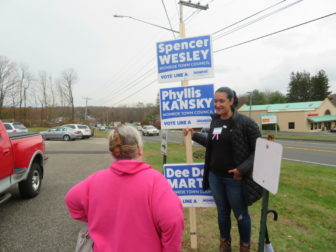 Christa DeLeo, a Democrat running for town treasurer, talks to a voter outside Monroe Elementary School.

Of those not winning seats, were Democrats Susan Koneff, a former registrar of voters who finished with 1,915 votes; Phyllis Kansky, a former Town Council member and town employee, who had 1,793 votes; and Spencer Wesley, who was running in his first election. He had 1,627 votes.

“It’s a great day for Monroe,” said O’Rourke, who is also the Republican Town Committee chairman. “We look forward to moving our agenda forward for the citizens of Monroe. Town first. Party second.”

“It’s just an affirmation that the town appreciates what has been done by the elected officials they have voted for in previous years,” Rooney said.

“I’m just very proud of our team,” said Formichella. “We worked very hard to get our message out and make sure our positive vision for Monroe goes forward.”