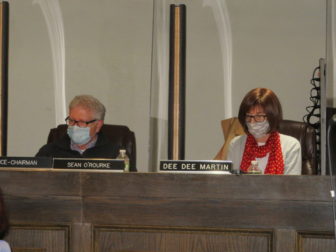 Vice Chairman Sean O’Rourke, left, and Councilwoman Dee Dee Martin had plexiglass partitions to either side of them during the Town Council’s first in-person meeting since the spring.

A GoToMeeting screen projected on the side wall allowed others to participate remotely. To enforce social distancing, yellow caution tape and strips of blue tape blocked off most of the rows of seats inside the room — though only one audience member had opted for in-person attendance.

The “hybrid meeting,” which gave people a choice of attending virtually or in-person, marked the first time the Town Council physically met in the same room since the governor’s restrictions on large gatherings in March, in response to the COVID-19 pandemic. 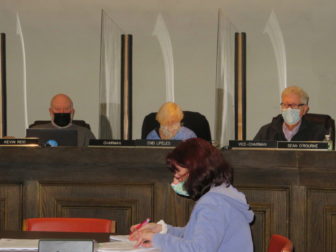 “It was wonderful to be able to be in person with all of our council members, though in a slightly different format,” Kellogg said.

Councilman Jonathan Formichella said, “I thought it went really well. It’s always great being at Town Hall and representing the people of Monroe.”

Having all nine council members in the same room allowed for more teamwork.

When all the meetings were being held virtually, to make things easier, Chairwoman Enid Lipeles would read the resolutions before all of the council’s votes. But on Monday, she could turn to her left and wait for Vice Chairman Sean O’Rourke to do the readings, before she called the votes.

But there were some challenges with the meeting’s format, such as interacting with other council members through several sheets of plexiglass.

“It’s definitely interesting,” Councilman Jason Maur said. “It’s almost dizzying looking through the glass, because you see the reflections of everyone. But we have to follow the public safety measures.”

“It felt very bizarre and I found it difficult to focus on people,” Councilwoman Dee Dee Martin said. “I had trouble hearing at times with all the plexiglass, in combination with the masks.”

But Martin added, “it was better than I expected it to be.” 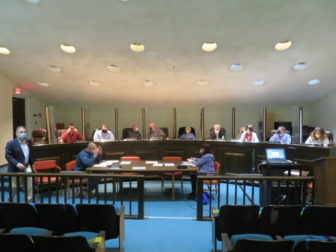