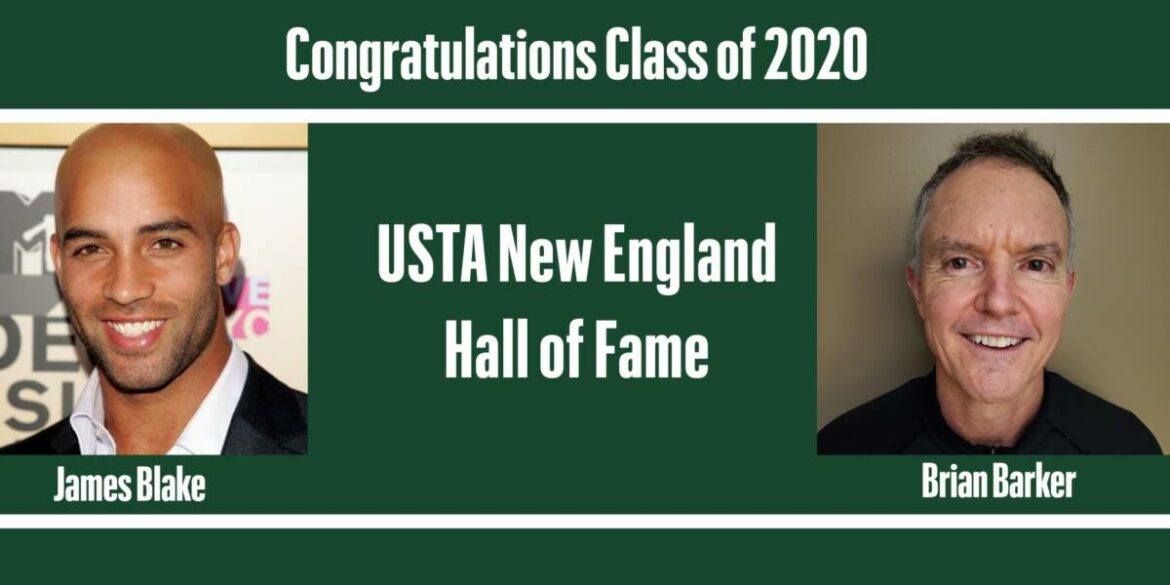 WESTBOROUGH, Mass. – Three-time Grand Slam singles quarterfinalist James Blake and his longtime coach, Brian Barker, of Monroe, have been selected as the newest members of the USTA New England Tennis Hall of Fame. The duo will be inducted together at a ceremony at the International Tennis Hall of Fame in Newport, R.I., on June 11 and will be enshrined as the Class of 2020.

“We are so proud to finally have the chance to recognize James and Brian for all they’ve accomplished in New England Tennis and beyond. They are prime examples of what hard work can do and have represented New England with the utmost professionalism throughout their tremendous careers,” said Brian Lomax, chairman of the USTA New England Hall of Fame Committee.

The USTA New England Hall of Fame exists to recognize and honor New England tennis players and non-players whose achievements or volunteer contributions in tennis-related activities have been outstanding over a significant period of time.

“Being inducted into the New England tennis hall of fame is special to me because that is my entire childhood memory of junior tennis,” said Blake, who grew up in Fairfield and is currently a tennis analyst for ESPN. “Playing all over Connecticut, Massachusetts and Rhode Island was such a treat for me and my family. Personally, I enjoyed my time playing in New England and some of the most lasting friendships I have started through New England tennis tournaments.”

“I am honored to have my name next to so many great tennis players,” Barker said. “Being inducted into the New England Tennis Hall of Fame gives me a way to say thank you to all those who have helped me in my tennis career, especially my family, coaches and friends. I would not be here without them.”

Barker coached Blake through the Tennis Club of Trumbull. He is a Monroe resident, who grew up in neighboring Trumbull.

Barker has made a career for himself as both a player and coach. He was one of the most successful juniors in New England tennis history, holding No. 1 rankings in the 14s, 16s and 18s division, while winning five consecutive Sectional Championships. He also held a top-20 national ranking.

Barker’s crowning achievements however were the multiple sportsmanship awards he collected. Sportsmanship was something his parents instilled in him from a young age and remains his top priority for his current students.

His success continued in college, where he played NCAA tennis at the University of South Carolina. He served as captain and was named a two-time team MVP.

Barker went on to have a short run on the pro tour before coaching full time.

He spent the better part of his club career coaching in the Tennis Club of Trumbull, where he had stints both before and after traveling around the world for 10 years as Blake’s coach. He currently serves as a high performance coach at the club.

Barker has earned a number of coaching awards throughout his career, including the USOC’s  National Coach of the Year honors in 2005 for his work with Blake.

“Being inducted into the New England Hall of Fame with James is huge and now means that I can honestly say that I can do something that James can,” Barker added. “But seriously, I am honored to be inducted on the same weekend as him. James has had a huge impact on my career, and it was because of him, that I was afforded the opportunity to learn how to teach at all levels, and that knowledge I’ve gained has made me a much better coach today.”

Those wishing to attend the Hall of Fame Induction Ceremony should contact Alex Wesley at [email protected] for ticket information. Nominations for the Class of 2023 are open and can be submitted here.