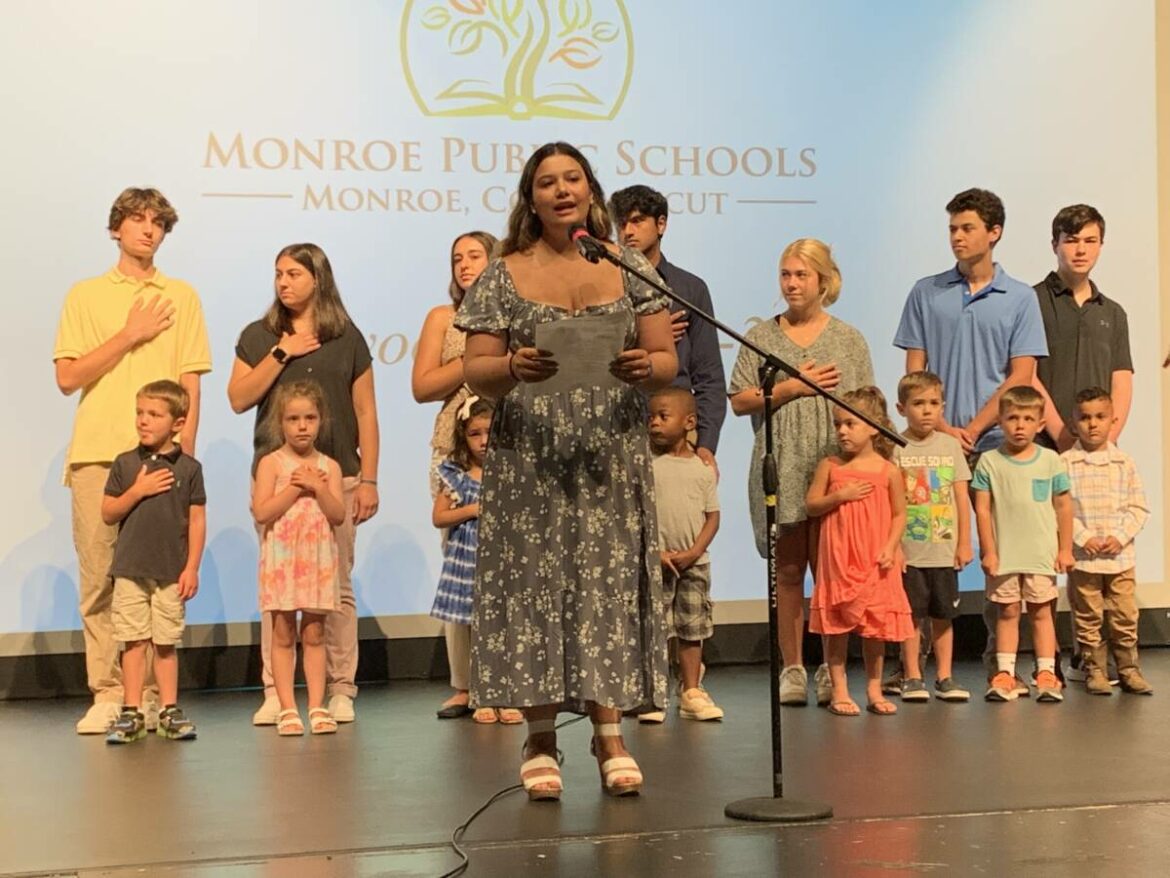 MONROE, CT — Elizabeth “Lisa” Martinsky, Monroe’s reigning Teacher of the Year, has been described as someone who always goes above and beyond. Caring and creative, her super power is the connection with her students, according to those who nominated her.

When introducing Martinsky at Convocation inside the Masuk High School auditorium Monday morning, past Teacher of the Year, Bill McDonough, shared his favorite line, describing Martinsky as having “the patience of an angel and the energy of the Energizer Bunny.”

In her turn at the podium, Martinsky, a second grade teacher at Stepney Elementary School, called the award an honor that has given her the gift of reflection on her 34-year-education-career.

“Every child needs a champion who insists they can be the best they can be,” she said, sharing a quote from a Ted Talk given by Rita Pierson. 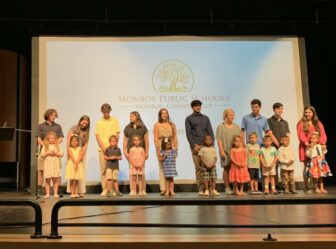 Members of Masuk’s Classes of 2023 and 2035 take the stage during Convocation in the Masuk auditorium Monday.

Scott presented a proclamation to Martinsky from the General Assembly on behalf of himself, Moore and Sen. Kevin Kelly, R-21st.

Board of Education Chairman David Ferris was also in attendance with board members Dennis Condon, Jerry Stevens and Dr. Alan Vaglivelo.

Superintendent of Schools Joseph Kobza called some members of Masuk’s Class of 2023 and the Class of 2035 to the stage in a touching gesture at the start of the event and Masuk student, Audrey Lesko, sang “The Star Spangled Banner”. 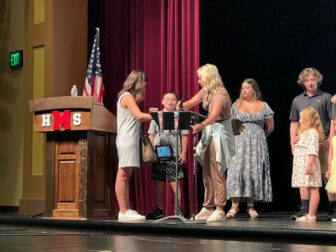 Ferris congratulated all of the recently promoted employees of Monroe’s public schools and gave a warm welcome to the new ones.

Reflecting on the difficulties of holding school during a pandemic in recent years, Ferris said how great it was to see smiling faces Monday without masks, no long lines for vaccinations or large orders of PPE.

“Thank you for what you do and welcome to a new school year,” he said.

“Everyone has a story of a teacher who changed their life beyond the classroom,” Kellogg said, asking the teachers at Convocation to keep that in mind.

Kellogg remembered an English teacher he had who was engaging and had students’ desks arranged in a circle, rather than the regimented rows — a “shocking concept” in the 1980s.

She was a teacher who gave thoughtful feedback on papers and notes of inspiration.

“It’s a reminder of the incredible power you have,” Kellogg told the audience. “You can influence students to learn and succeed.”

Franco recalled his first teaching job at a Catholic school and the feeling he had when the bell rang for the first day of school: “Holy __, here they come.” He reminded teachers how their students will be nervous as well.

Dixon noted how a number of staff members will be familiar faces in new positions this year. “We are one of the few districts, that have almost all of our positions filled,” she said.

While socializing at a new teacher luncheon, Dixon said she found most positions were being filled by teachers with two-to-10 years experience. She said most told her they applied for jobs in Monroe because they had heard it is a supportive community and how teachers have a good relationship with administrators.

“We rally around each other in times of need. We promote from within,” Dixon said, adding the district would not be what it is if not for everyone going above and beyond.

Kobza told the story of how he recently drove his daughter, Maddie, to Clemson University in South Carolina, where she will go to school. He felt stress over all of the work that needs to be done to start the new school year in Monroe and contemplated taking an early flight home.

But Kobza’s wife told him to just relax and enjoy his time with their daughter.

“Just as I gave myself permission to be happy with my journey with my daughter, we deserve positive feelings during work and our kids feed off that,” Kobza said, while encouraging positive attitudes among staffers.

Every child needs a champion 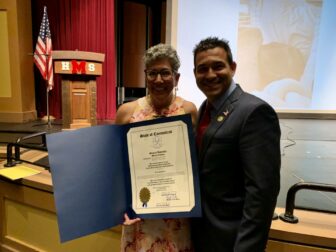 Teacher of the Year Elizabeth “Lisa” Martinsky, left, receives a proclamation by the General Assembly from State Rep. Tony Scott, R-Monroe, at the Convocation at Masuk High School Monday morning.

“As a child, school wasn’t easy for me. It was really hard,” Martinsky said, recalling how she was in tears when she could not do her homework as easily as other kids.

She described herself as a girl with curly hair, buck teeth and glasses and said other kids called her names like “four eyes” and “klutz.”

“I remember wanting to run away. I didn’t get very far. I hid in the bushes in our yard and cried,” Martinsky said.

Her sister provided protection on the school bus, but in the classroom Martinsky was on her own. “I needed a champion,” she said. “I was fortunate to have that champion, an adult who was a teacher and a mother …”

Martinsky’s champion was her mother, Elizabeth, who spent late nights encouraging her daughter and helping her with her homework. “I’m proud to have her name,” Martinsky said.

Martinsky went on to earn the same academic degrees as her mother, at the same college. She proudly keeps graduation photos of herself and of her mother at home — both women donning a cap and gown in their photo.

“Ultimately, my goal for my students is to simply be there for them,” Martinsky said. “To be there for all of them. To help them when they struggle.”

Martinsky said she wants to be their voice when they can’t speak, song when their praises need to be sung, and “to never give up on them — no matter what.”