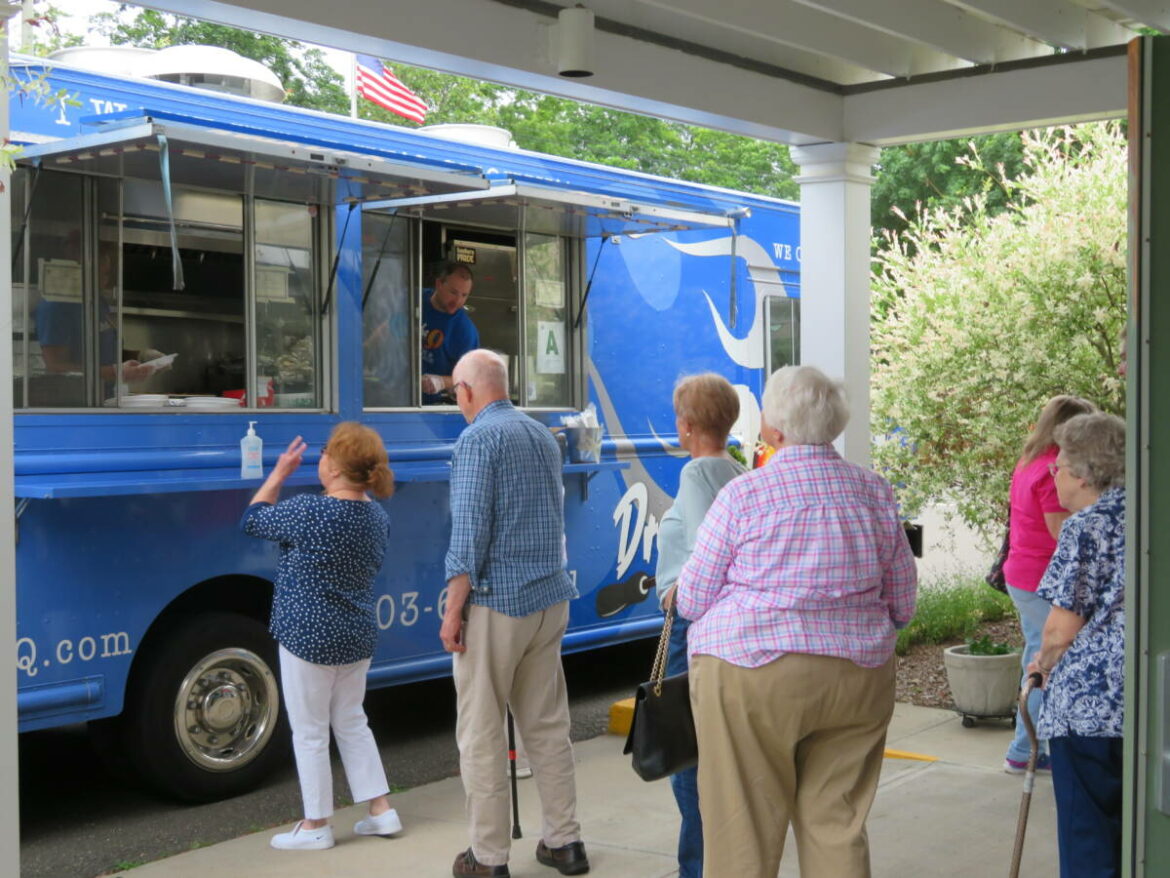 MONROE, CT — Patrons of the Monroe Senior Center lined up at the blue DrewbaQ truck for plates of pulled pork and pulled chicken Tuesday afternoon. Inside, the main room was packed, as friends chatted around tables, catching up on old stories and family news.

The Summer BBQ attracted over 90 diners. Kim Cassia, administrative assistant of the center, said it was their first indoor luncheon since they celebrated Christmas in December of 2019.

Social distancing was practiced throughout much of the COVID-19 pandemic, but restrictions were recently lifted and Cassia said the senior center’s programming is gaining momentum.

Anne Beckwith and her husband, Chip, sat with their friends Catherine Belanger, and Gail and John Vena.

“It feels like being out of hibernation, doesn’t it?” Beckwith asked.

Though none of them wore masks on their faces, she and her husband kept colorful masks around their necks. “He made them,” Beckwith said of John, who had taken up quilting and also made homemade masks for Edith Wheeler Memorial Library.

“Now we can enjoy each other’s company again and have a chance to chat, chat, chat,” Gail Vena said with a smile. “My husband came here for the vaccination in February. He was masked up. Three to four months later, we’re back enjoying smiling faces — happy faces. You can feel the joy.”

“It’s good to be back here,” Belanger agreed. 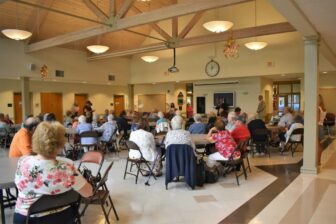 “Everybody’s raving about the food,” Cassia said, adding patrons had a choice between pulled chicken or pork with a barbecue brownie or bread pudding for dessert.

“When things were opening up, Ken said, ‘can you guys have a picnic?'” she recalled of First Selectman Ken Kellogg.

The first selectman, who attended the luncheon, recalled how the town gave COVID vaccinations at the senior center at one time. “I said how wonderful it was that we could all get here and gather,” Kellogg said of speaking earlier in the event. “And someone called out, ‘and no masks.'”

During the event, Kellogg donated $2,000 to the senior center through his charity, the Monroe First Foundation. The foundation also donated a $1,000 scholarship to the Monroe Scholarship Foundation for a deserving Masuk High School student and $3,000 to the Masuk Post Prom this year.

Cassia said the $2,000 donation will be used for the Monroe Senior Center’s programming. With more outdoor activities this summer, she said it may pay for another cornhole or bocce set, but that the center’s patrons will decide how the money is spent.

A sense of normalcy 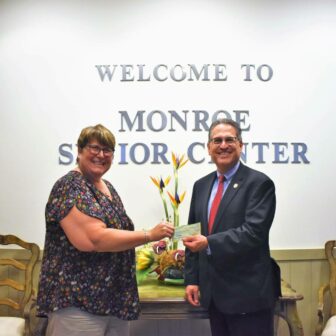 Among those attending Tuesday’s Summer BBQ was Henna Ali, Monroe’s former Community and Social Services director, who will be moving to Florida on Monday.

“It’s great to see everybody back,” she said. “It brings a sense of normalcy. We’re here to do these things for the seniors.”

Hiring DrewbaQ to cater Tuesday’s event freed up staff members to be out on the floor talking to everyone, Cassia said.

“We haven’t seen people for a year,” she said. “We got to see their whole face and say, ‘hi.’ Everybody was so excited to be sitting with their friends, hanging out and eating.”

Monroe Senior Center patrons should eat well this year. Cassia said the center tries to have an event with food once a month.

Last month they had a drive-thru hot dog event, in which Ali wrapped the hot dogs and handed the food to patrons, while someone could be seen grilling more hot dogs behind here.

The center is having an ice cream social next month, and because August is National Sandwich Month, Cassia said the senior center is considering an event with grinders.

Images from a Summer BBQ 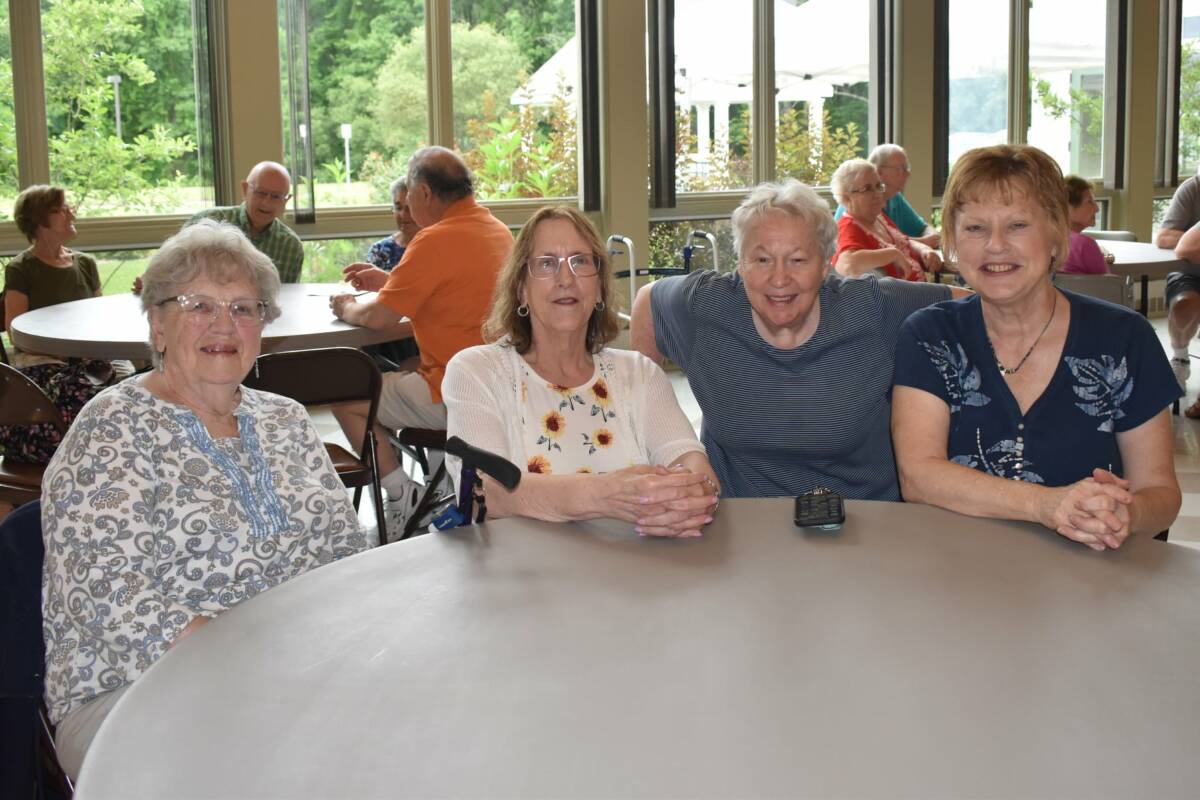 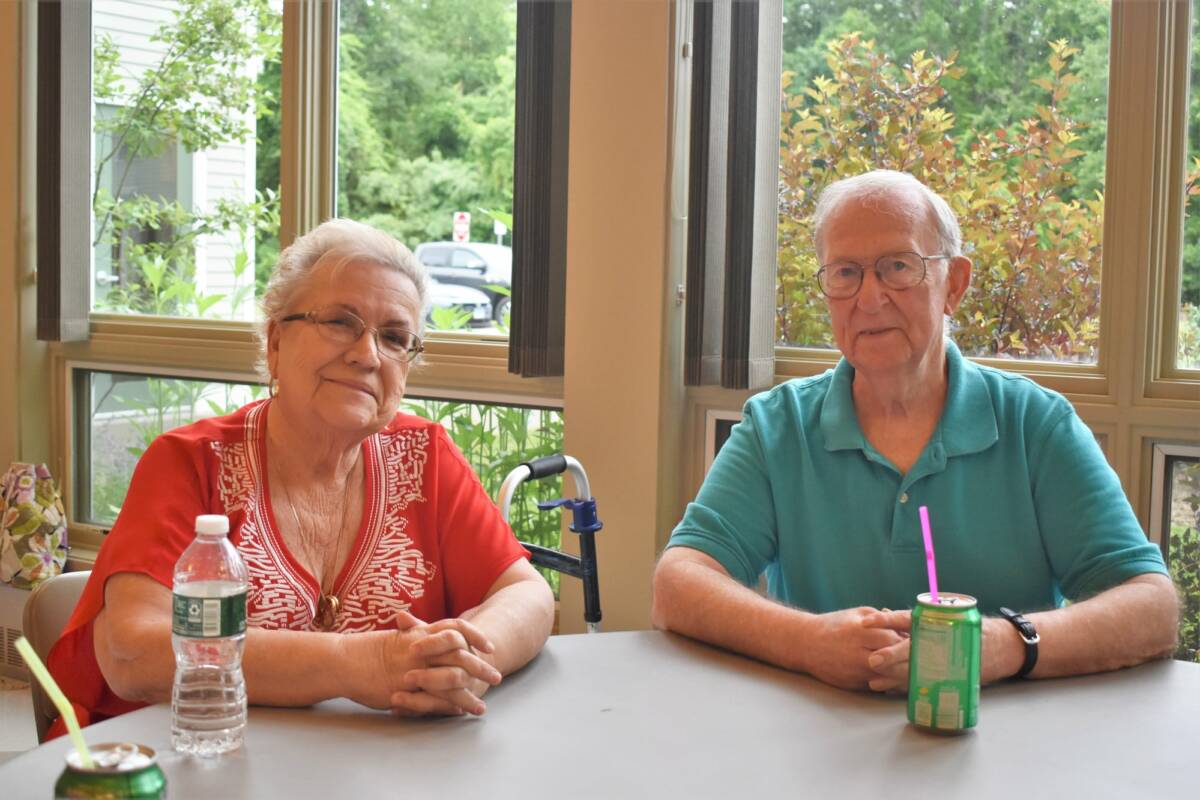 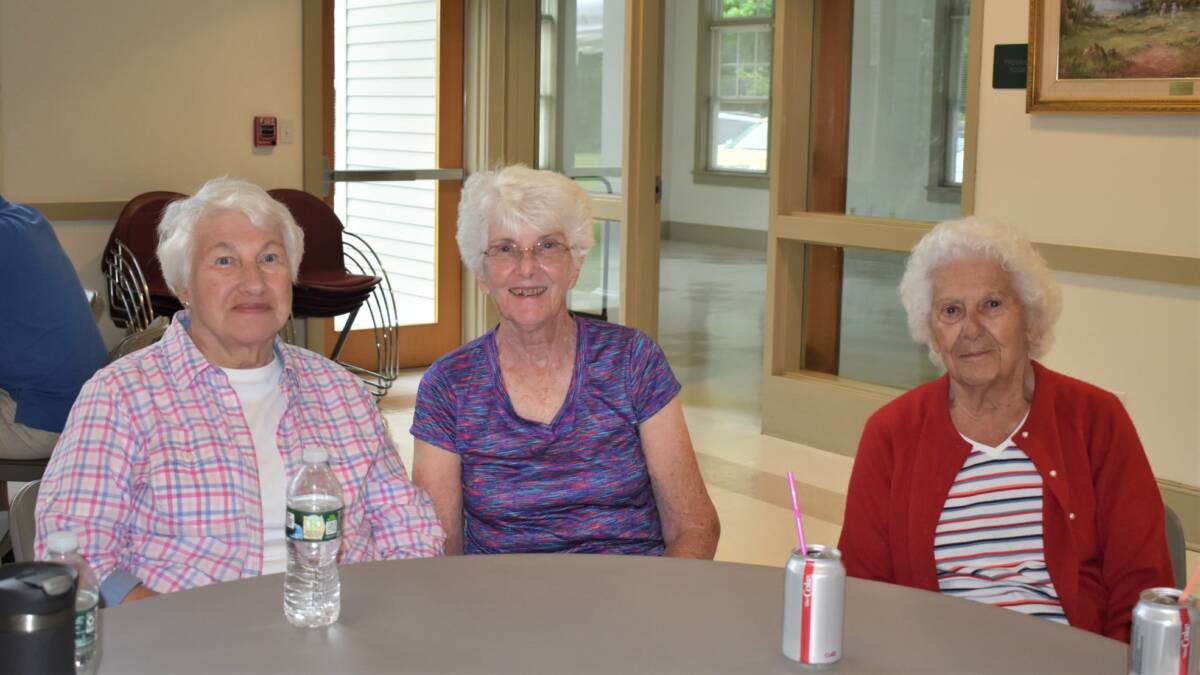 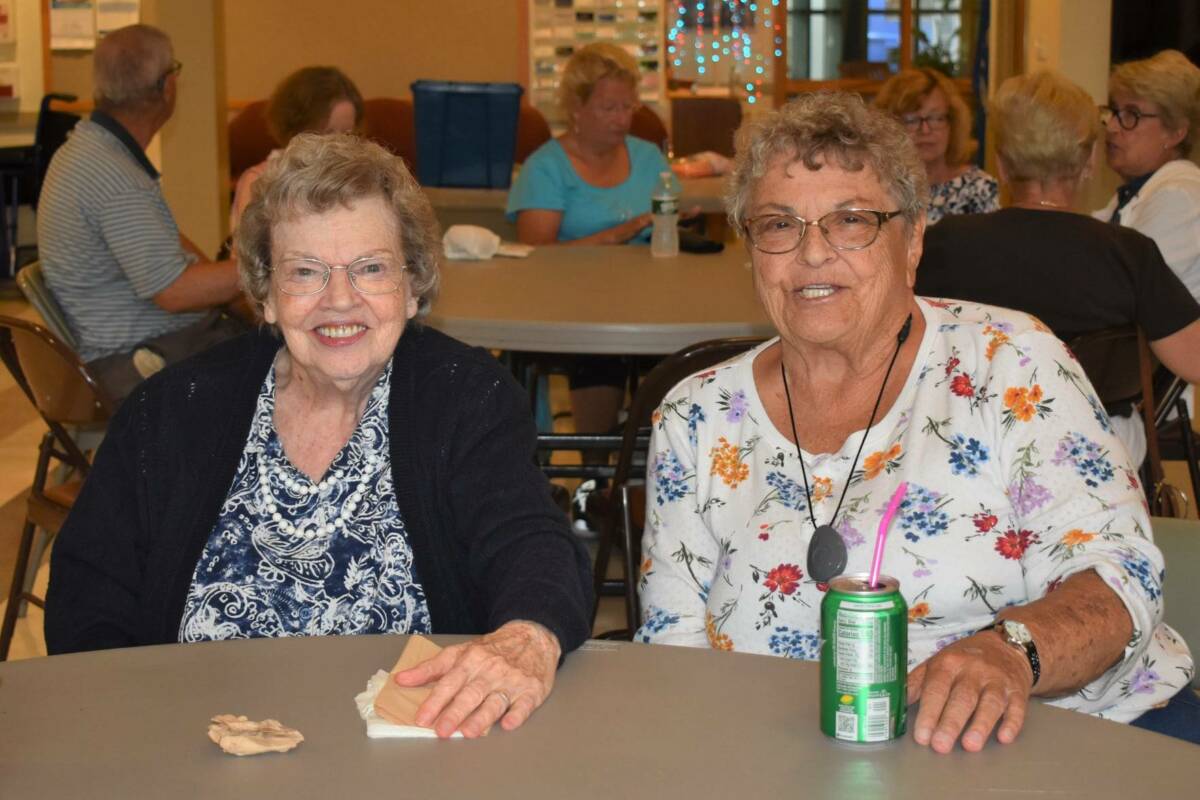 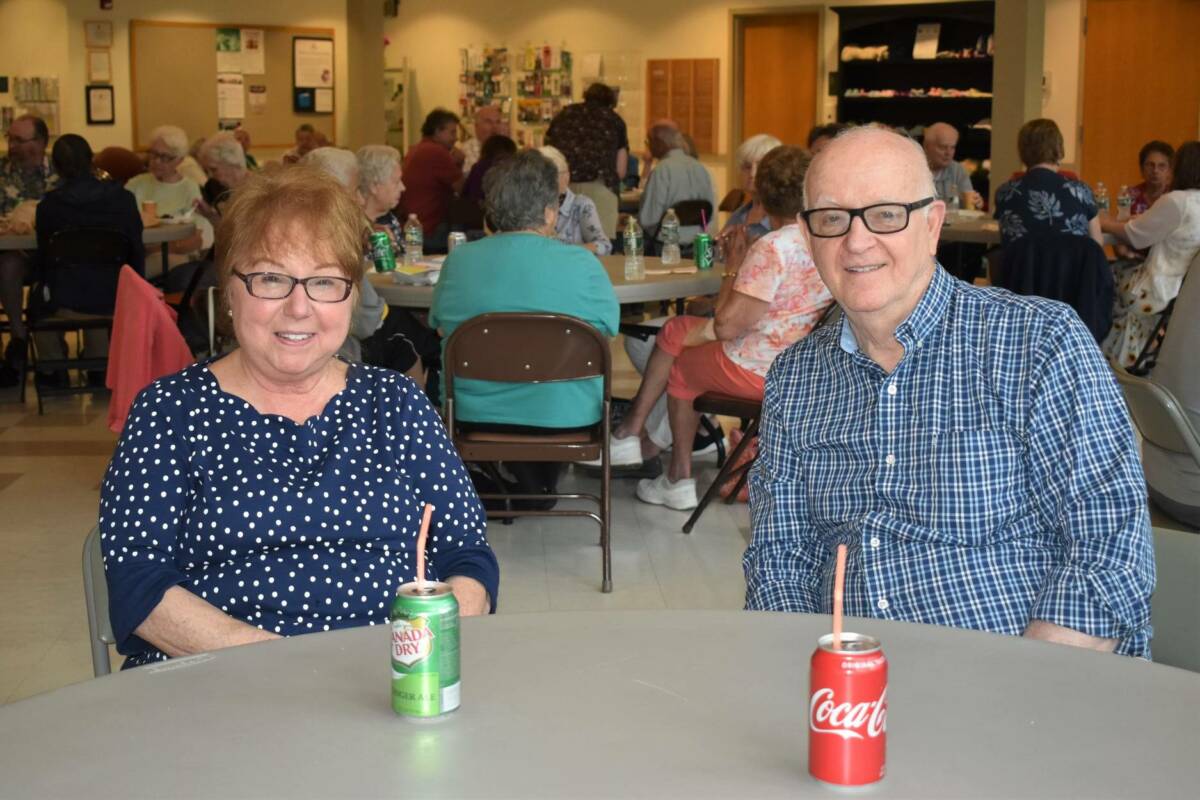 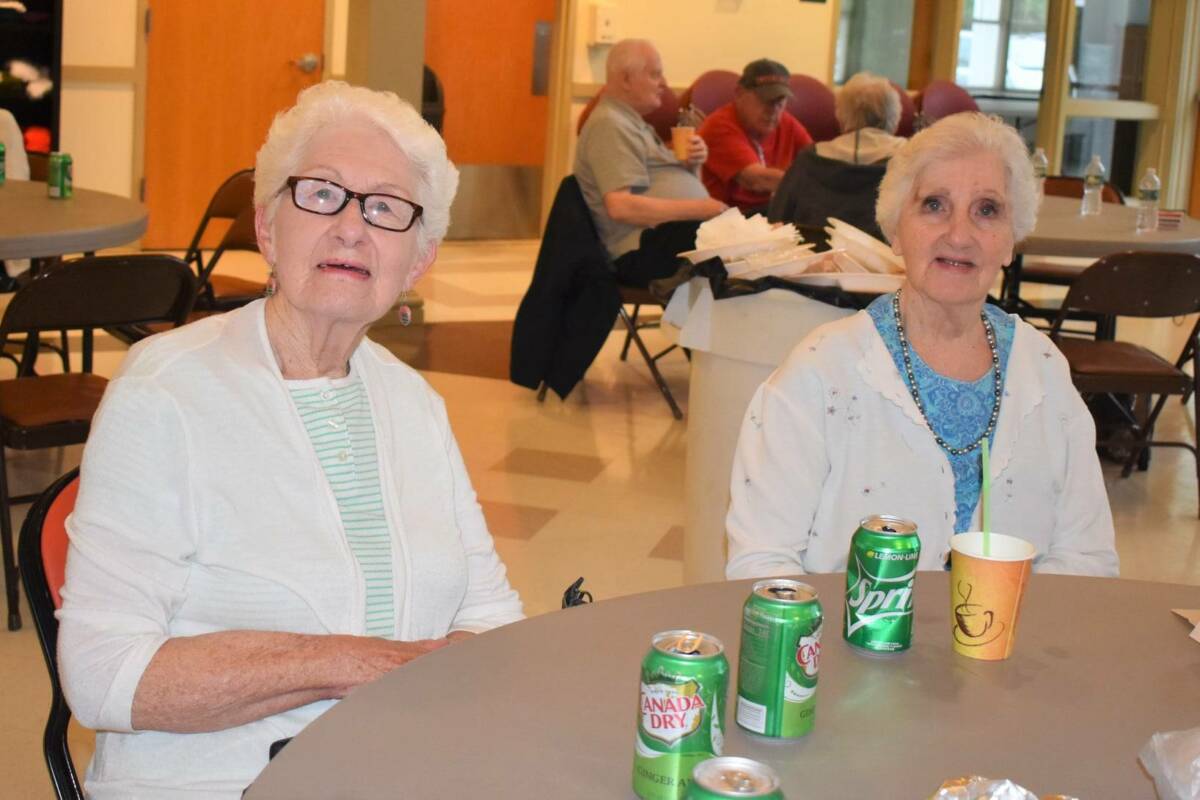 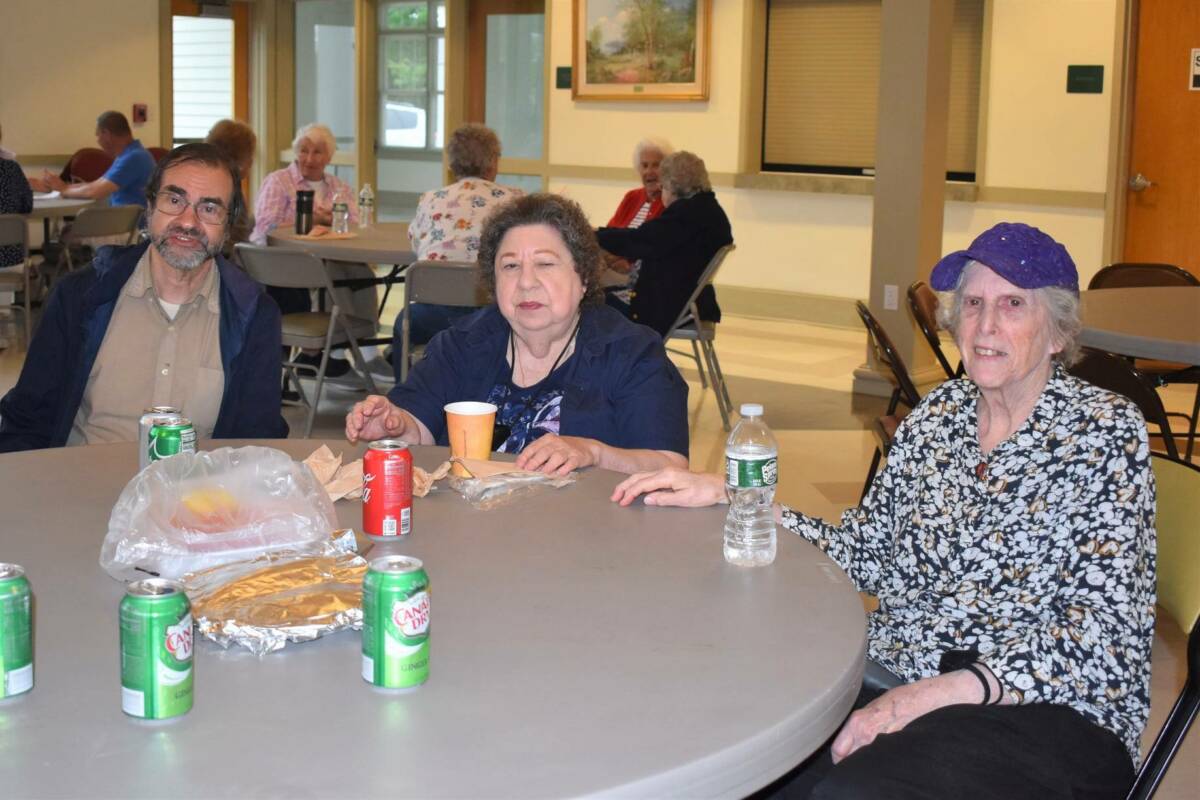 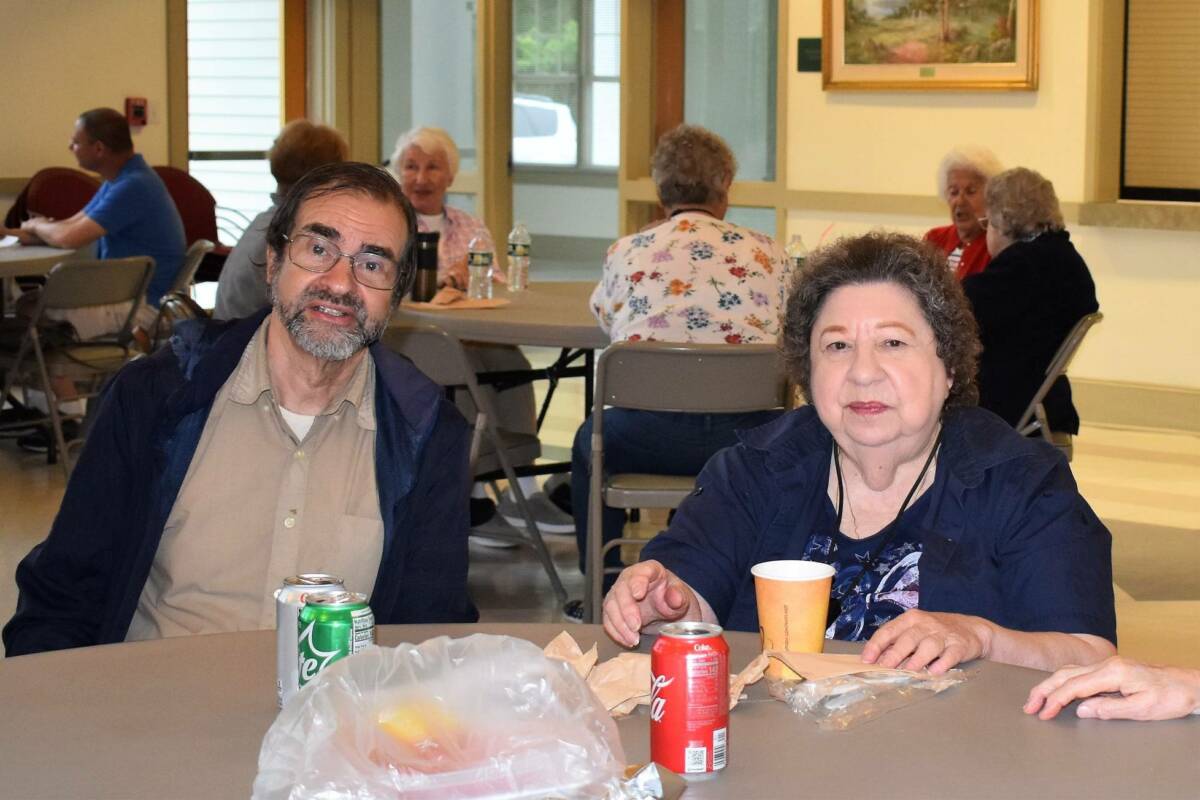 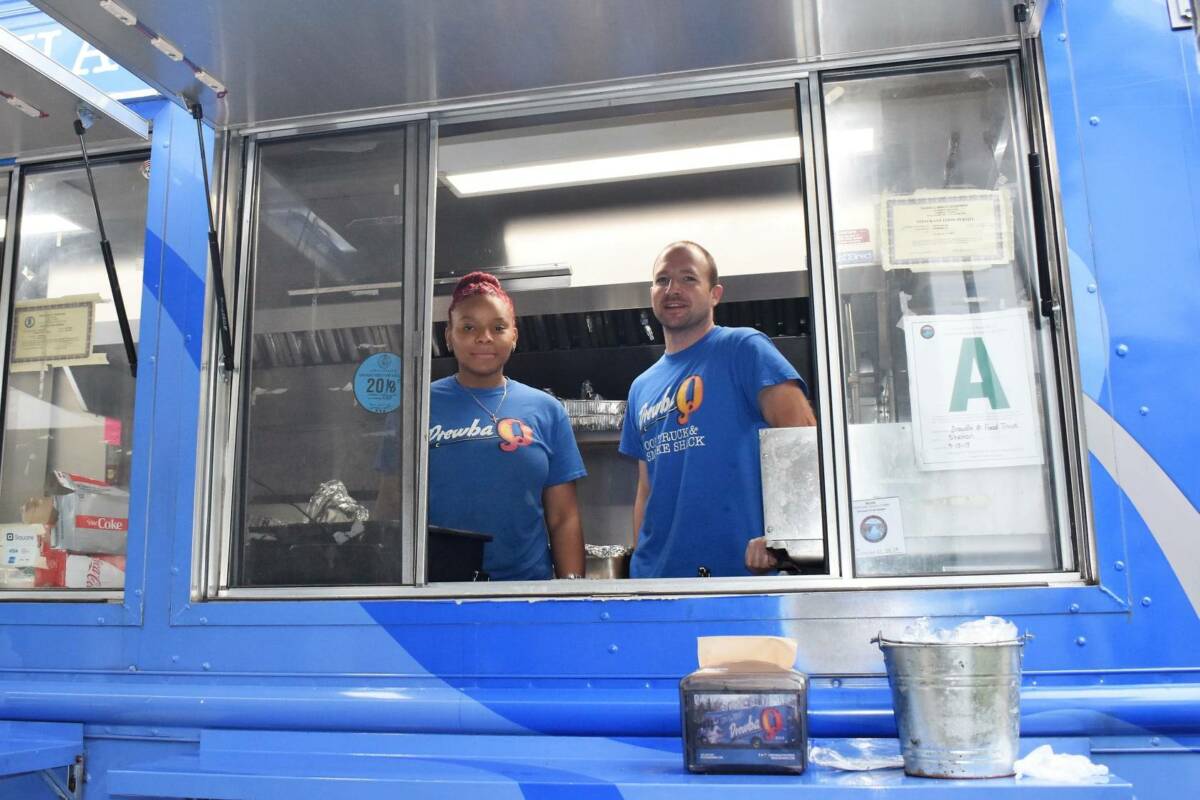 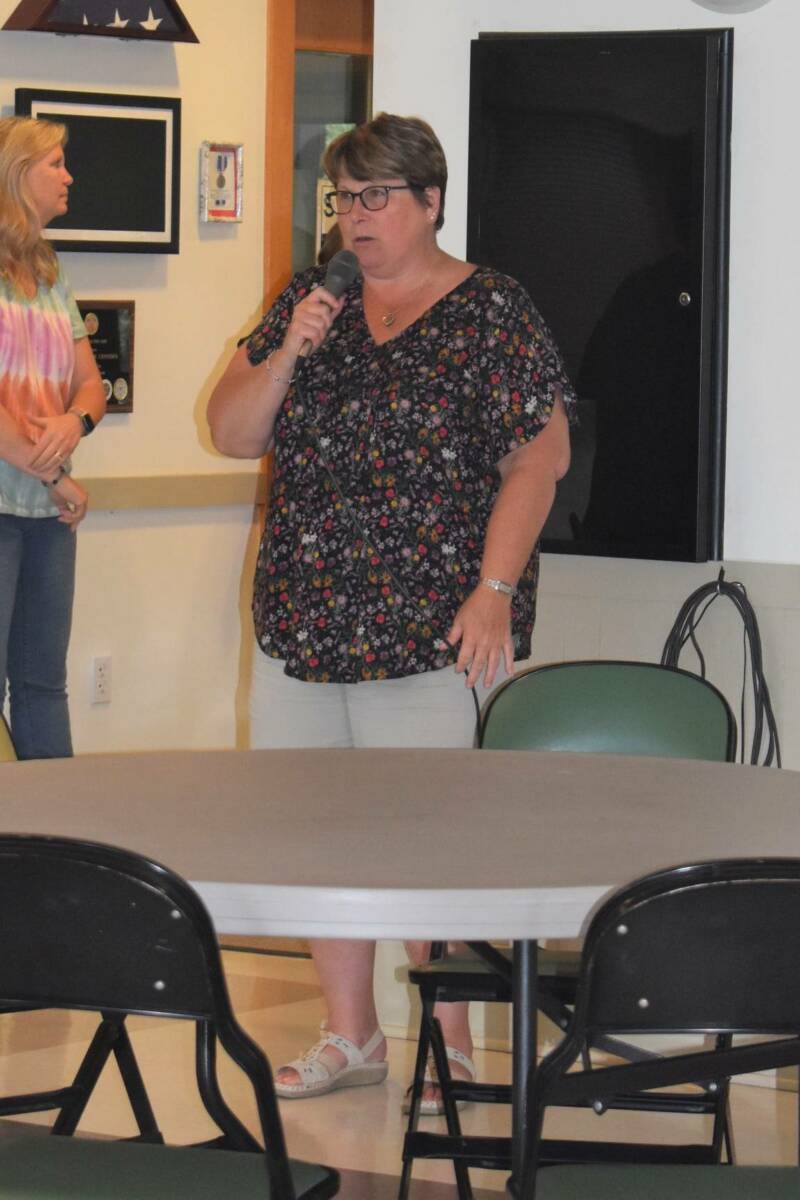 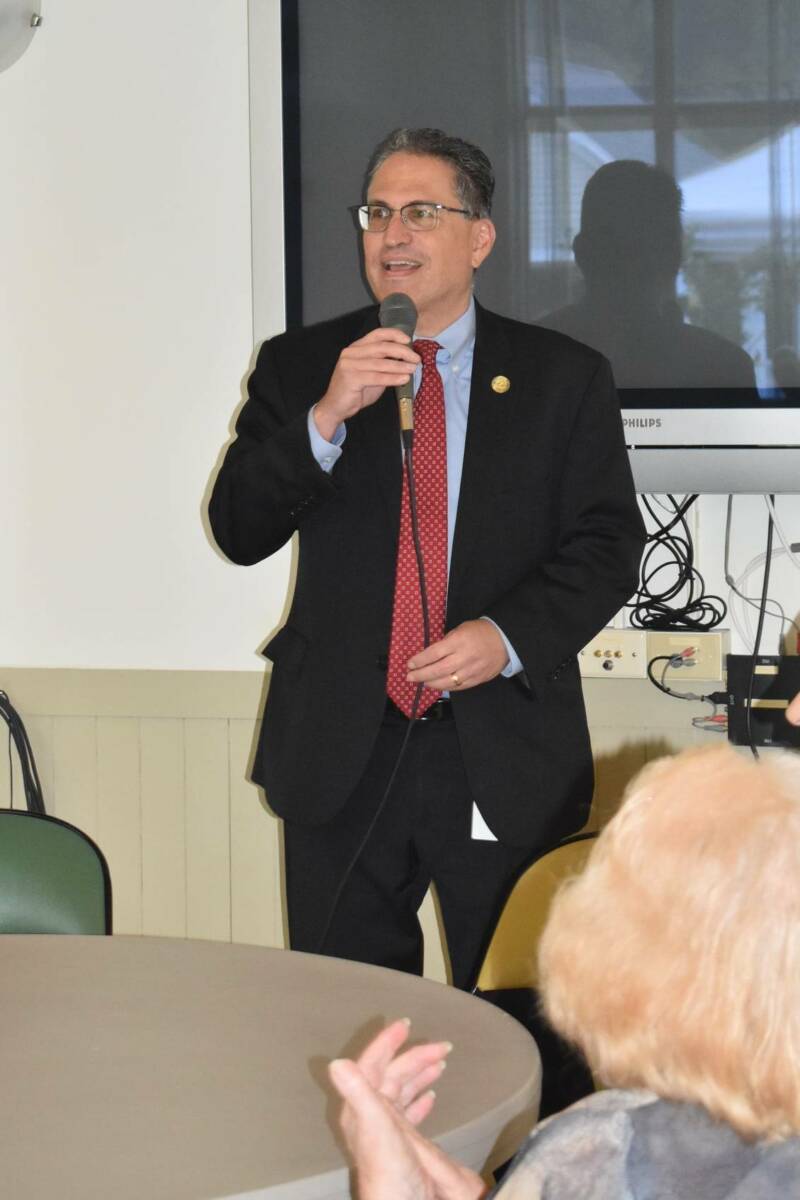 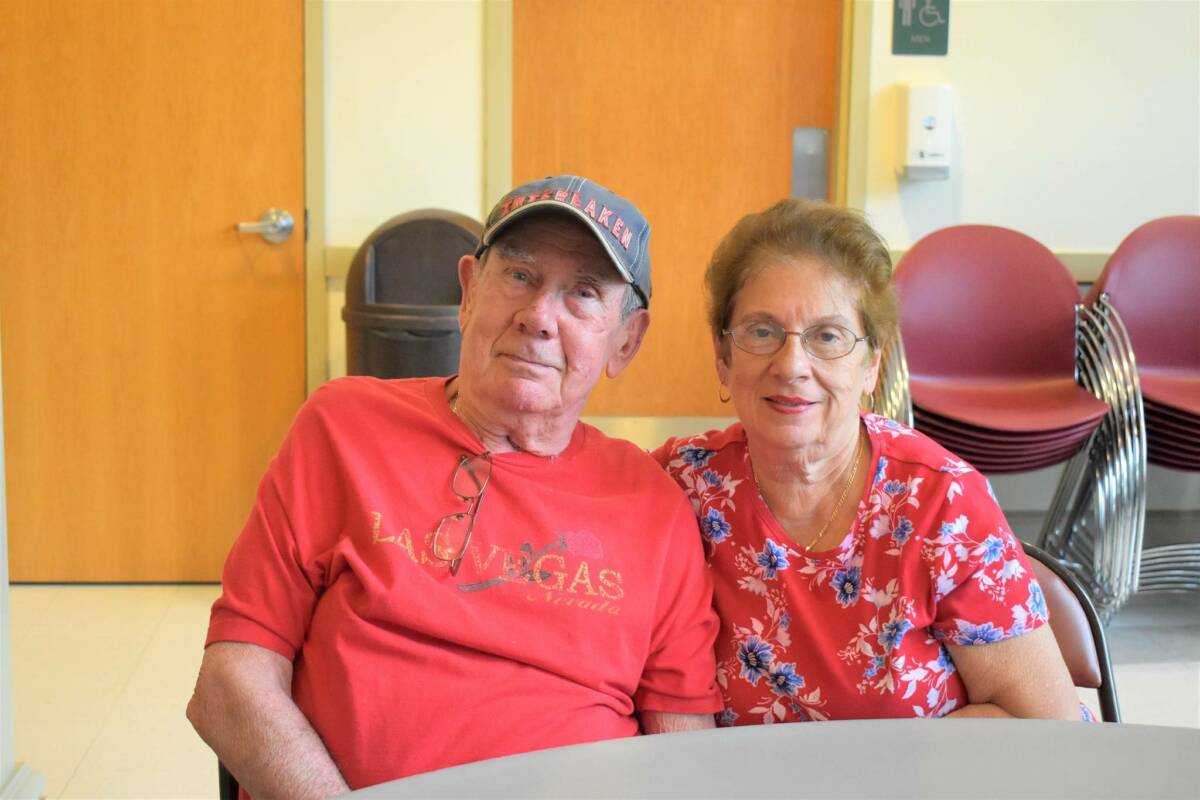 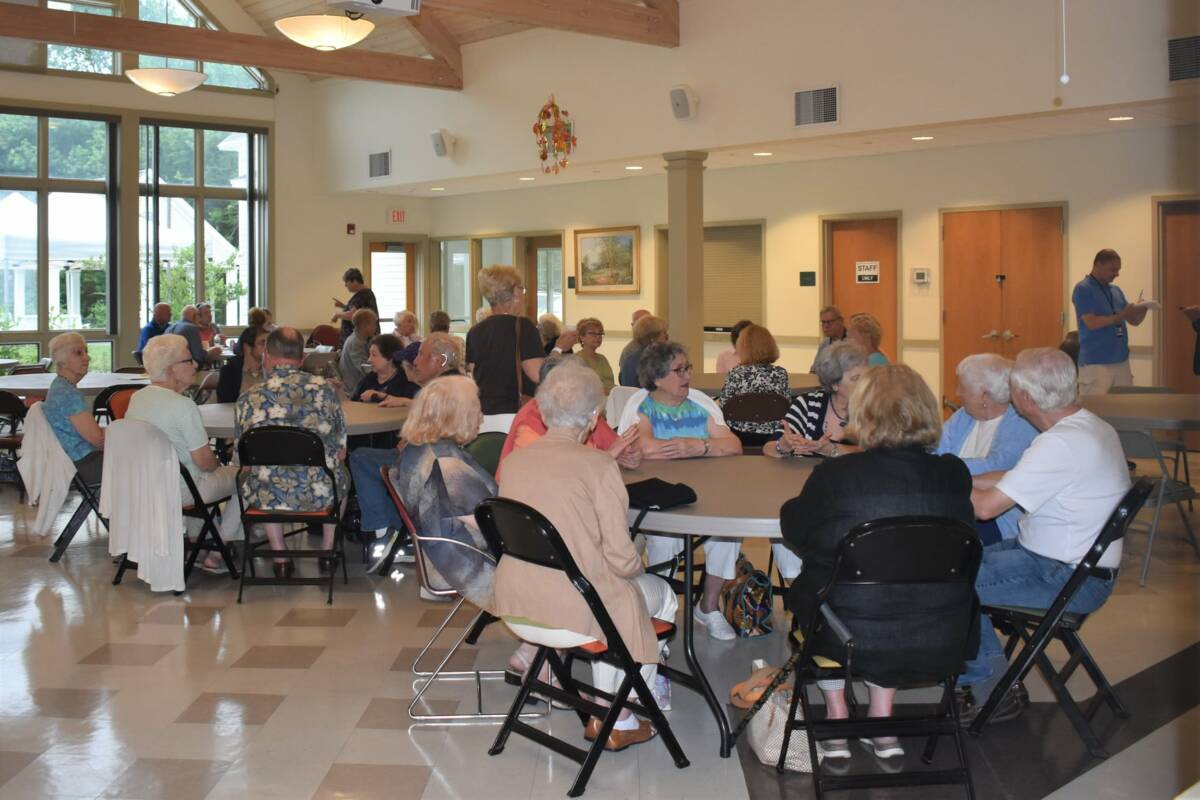 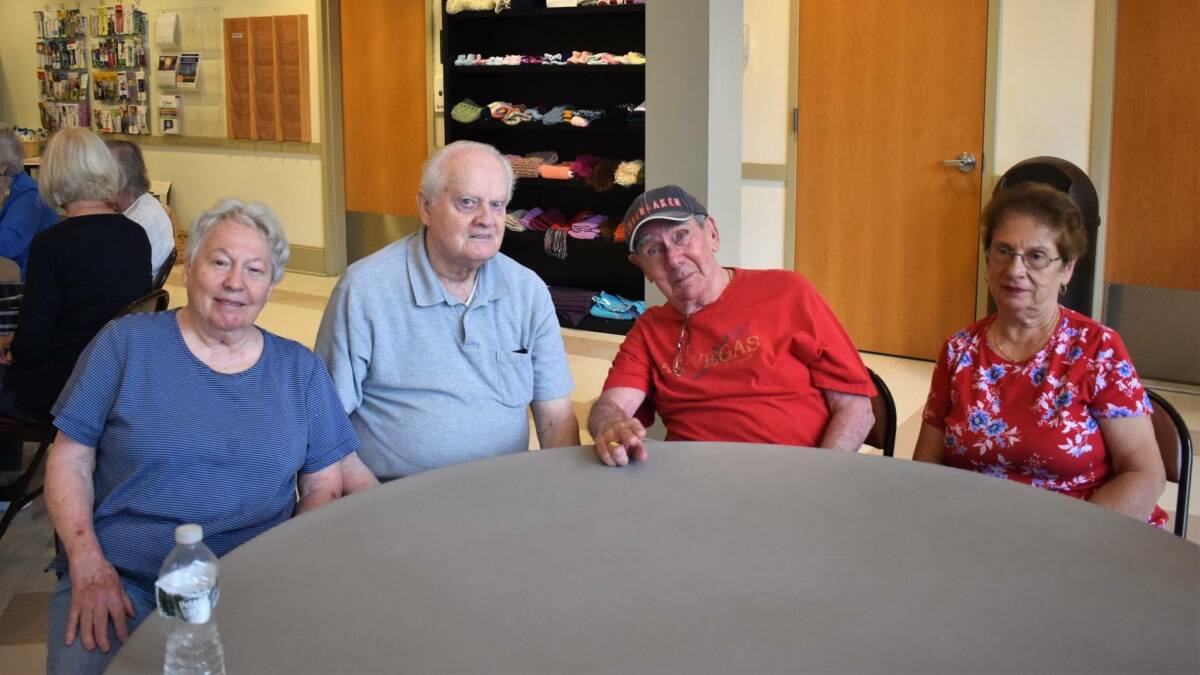 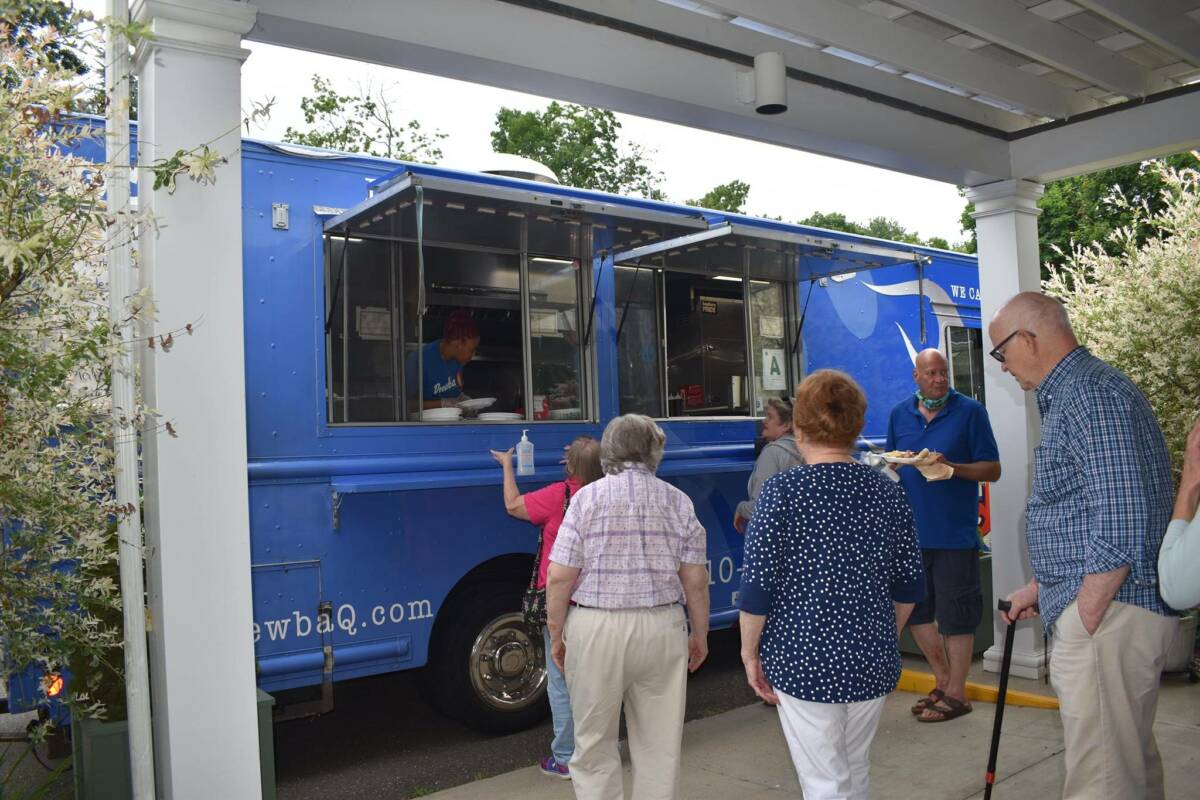 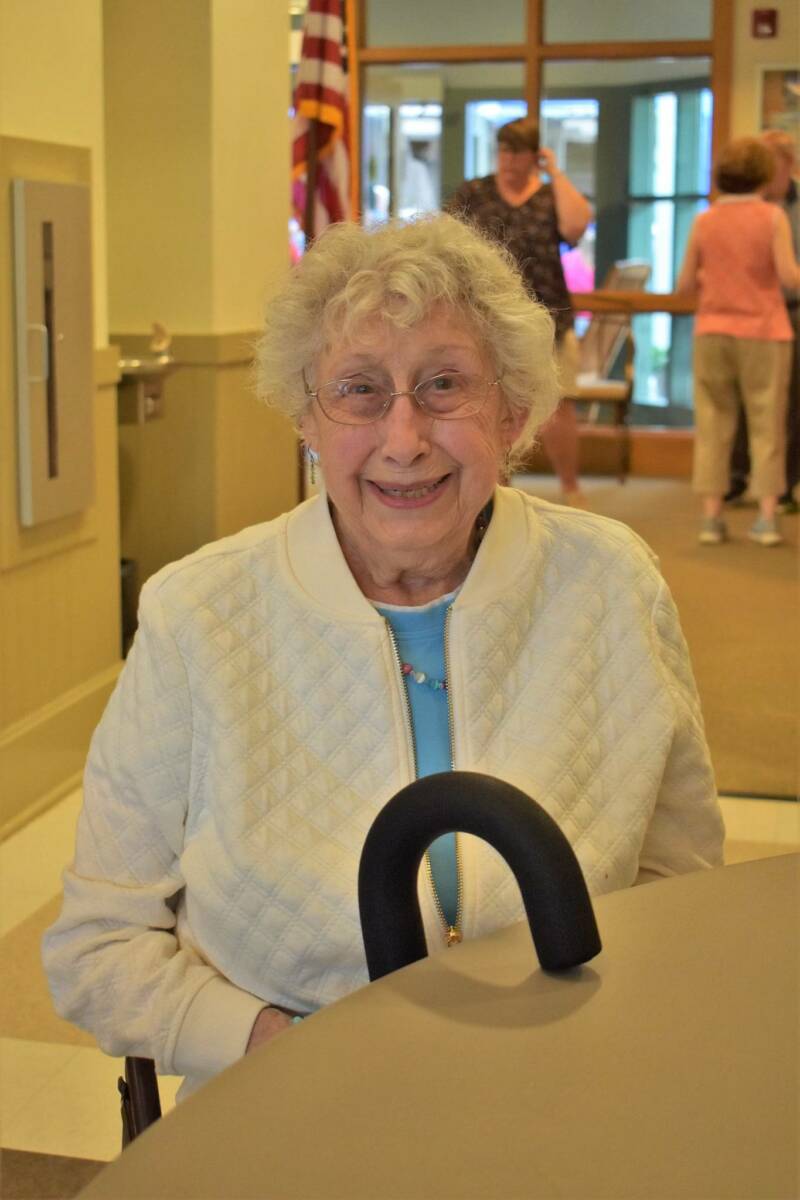 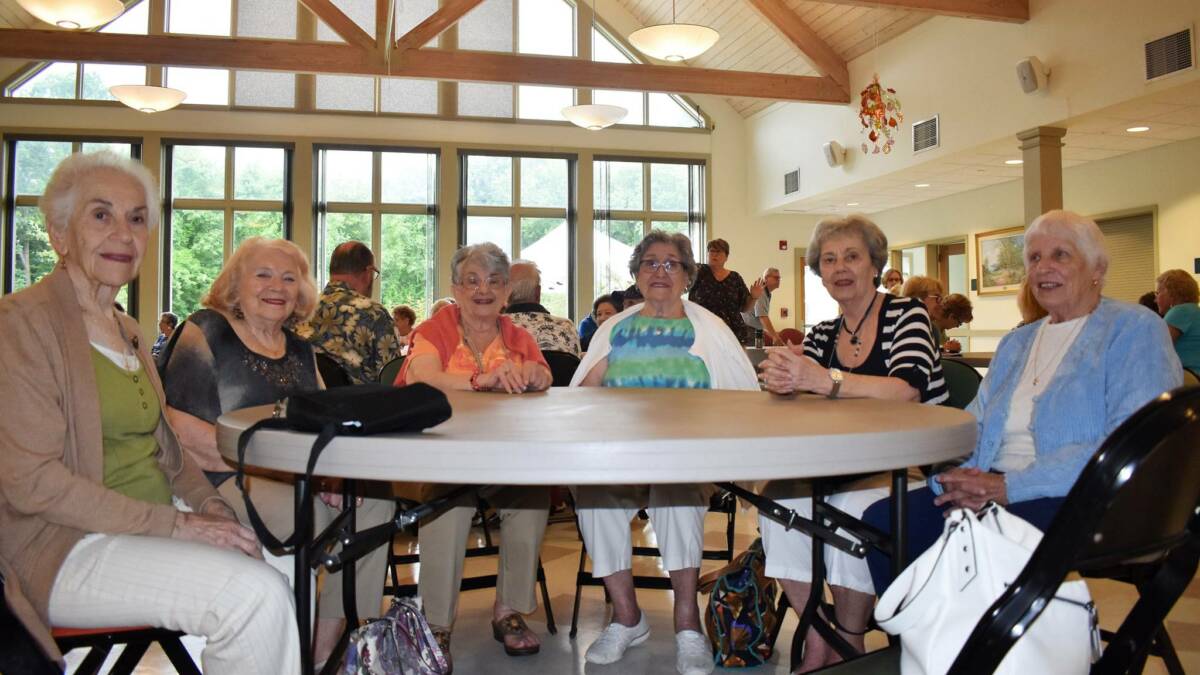 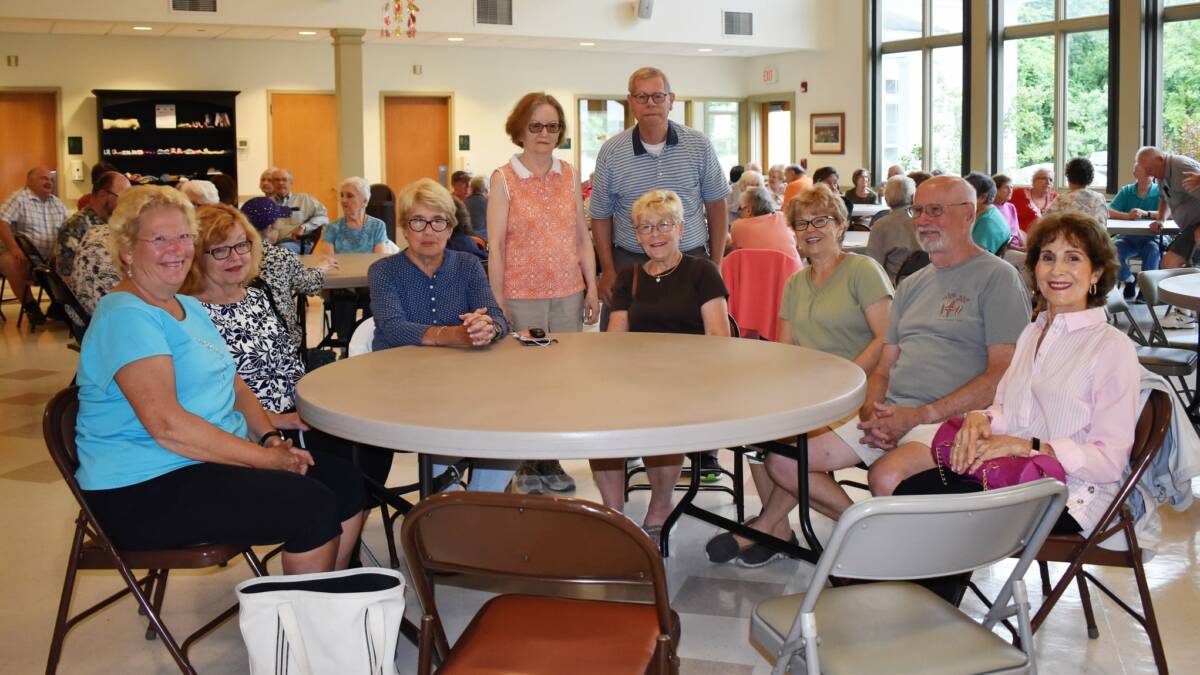 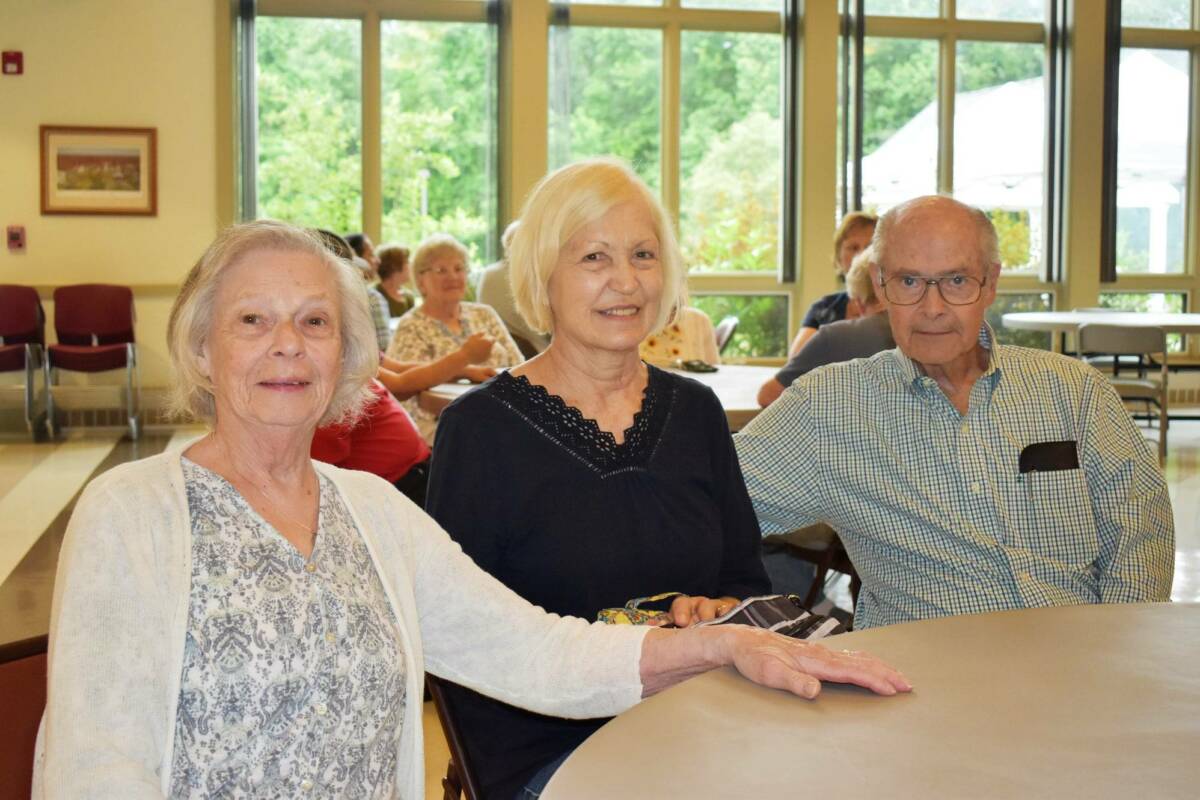 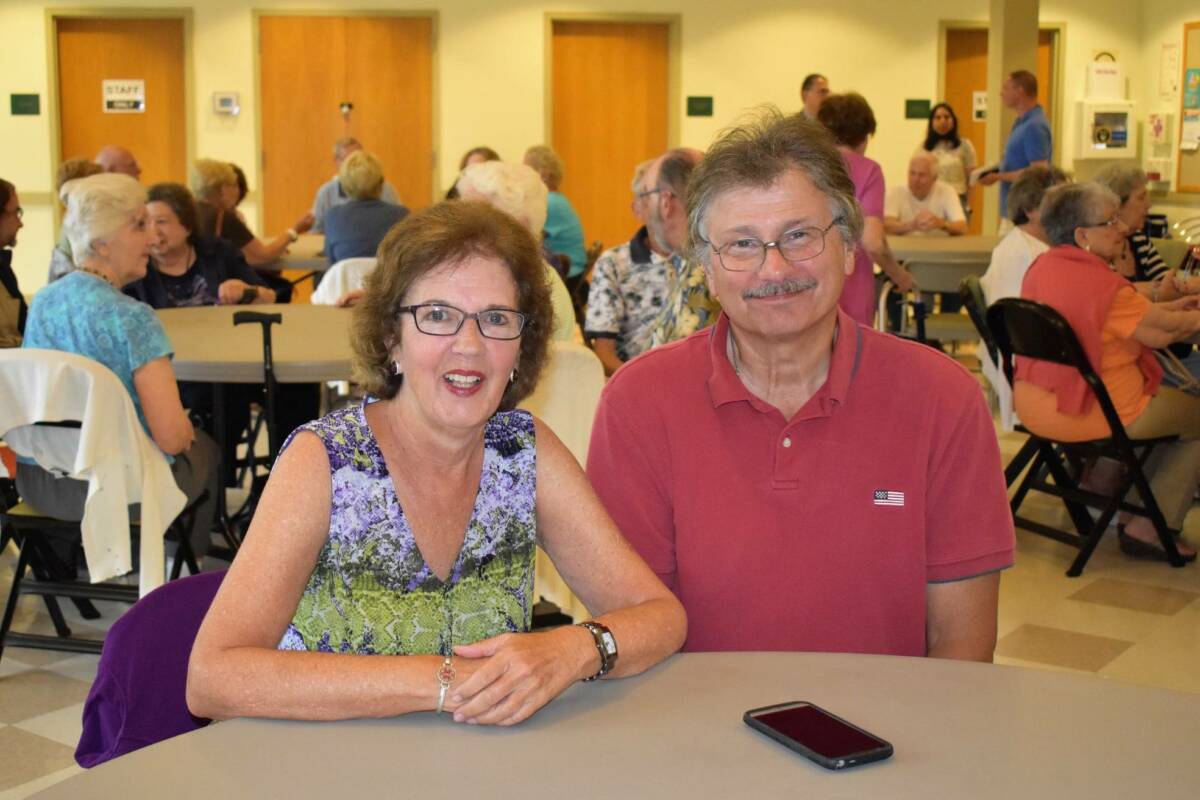 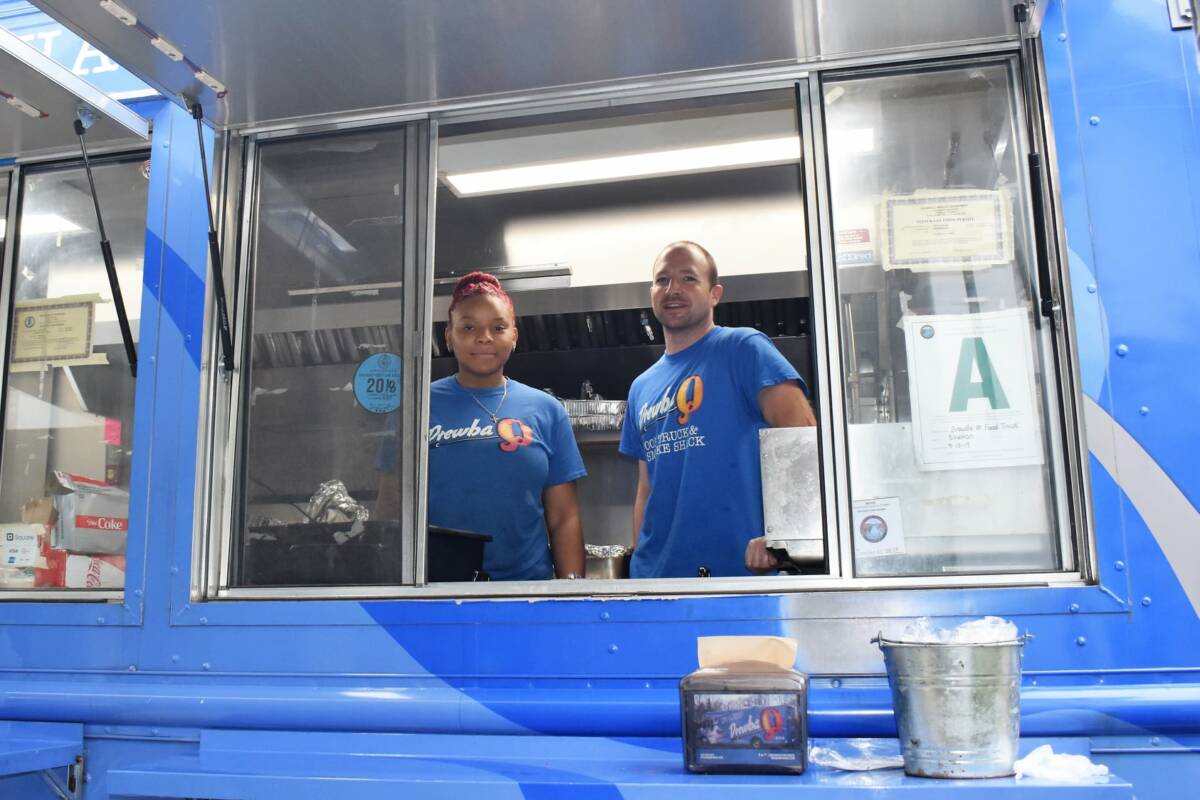 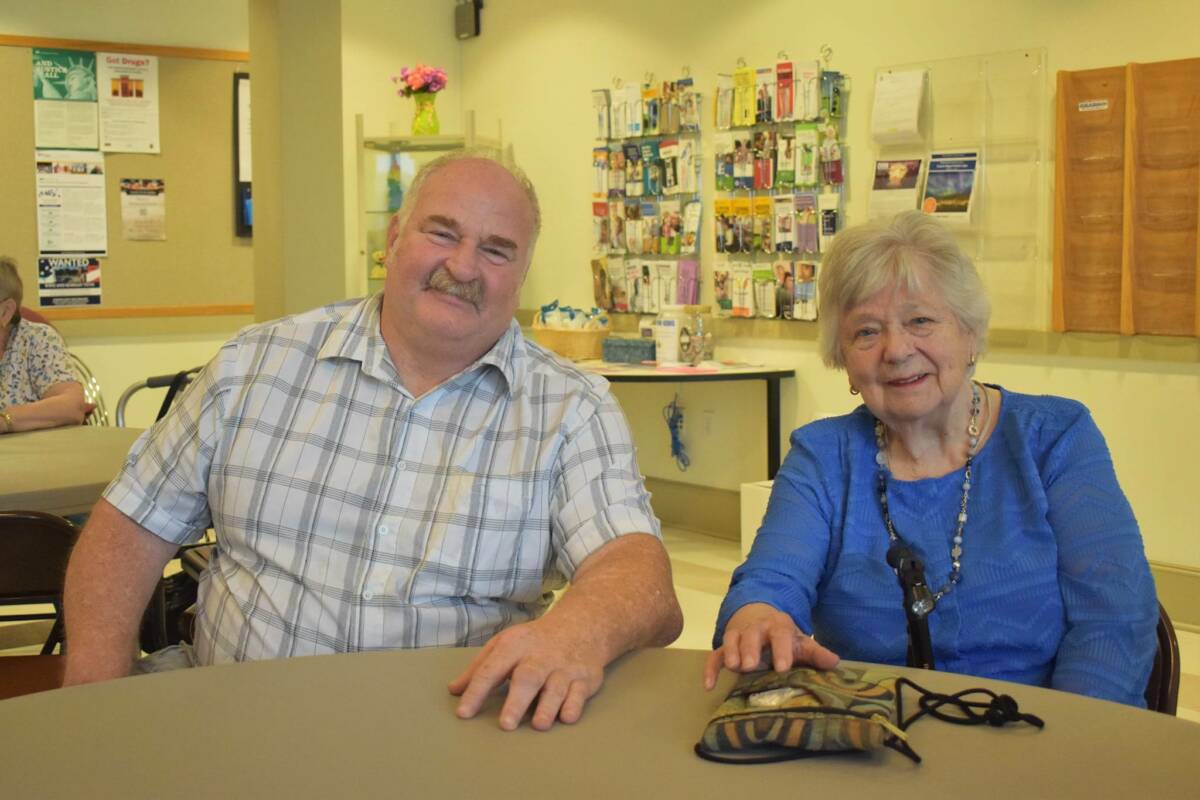 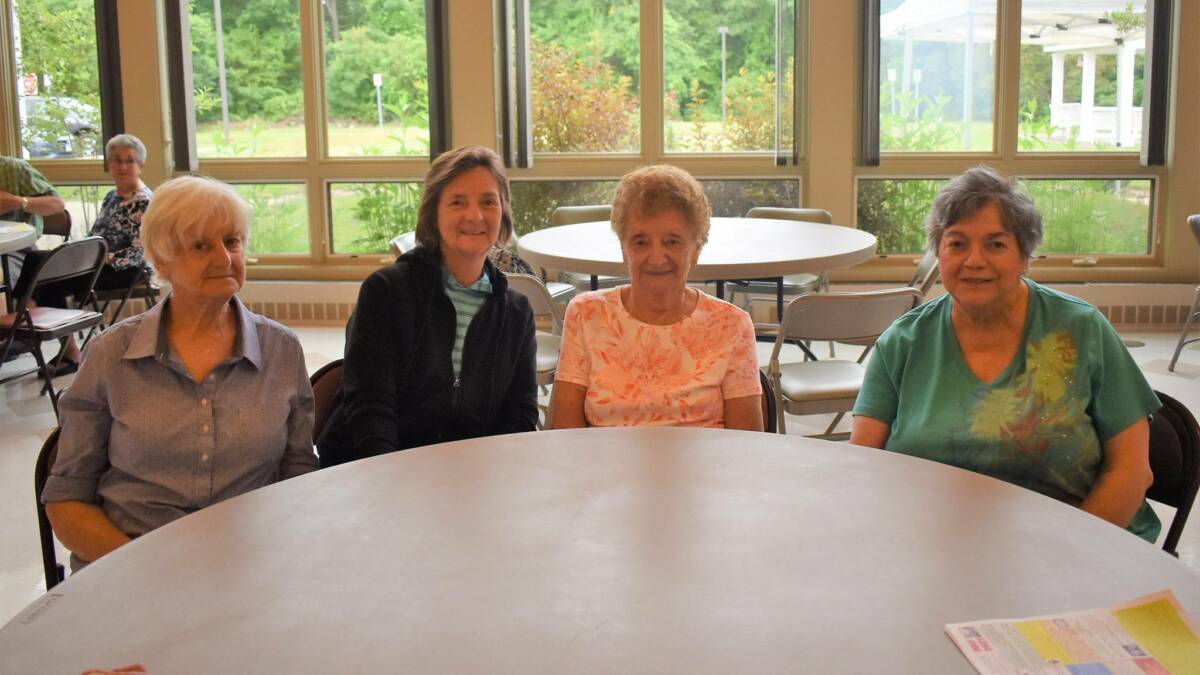 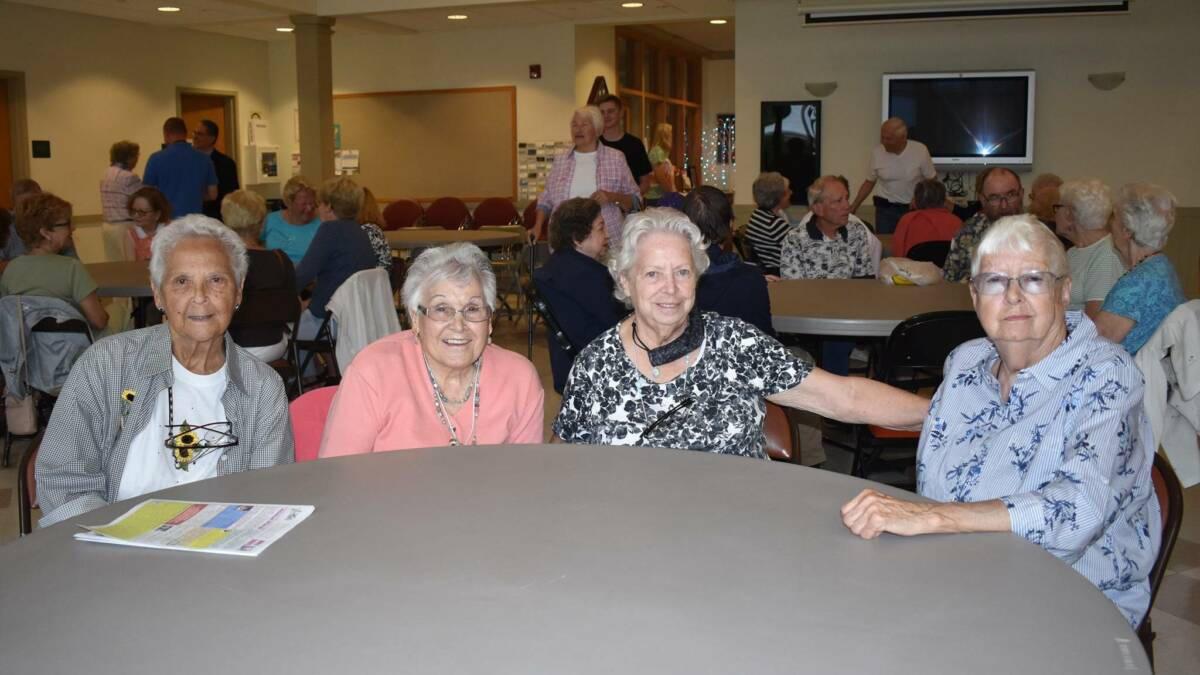 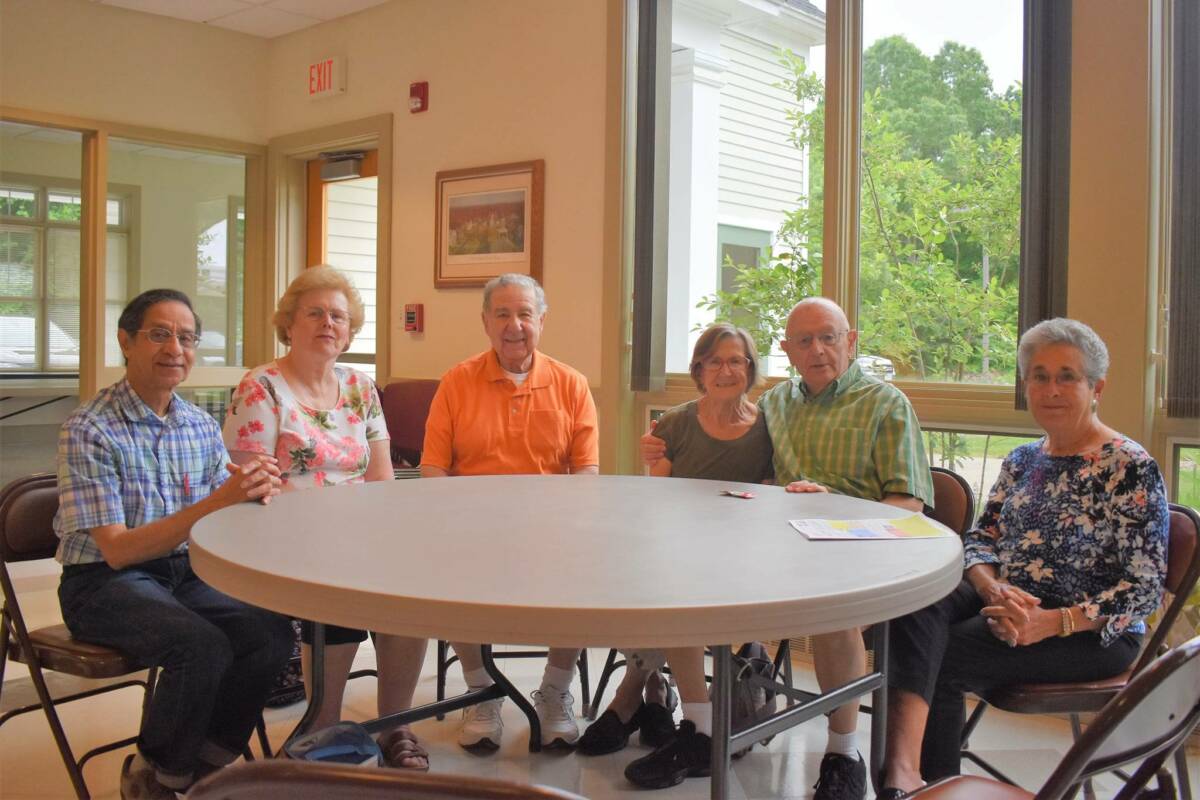 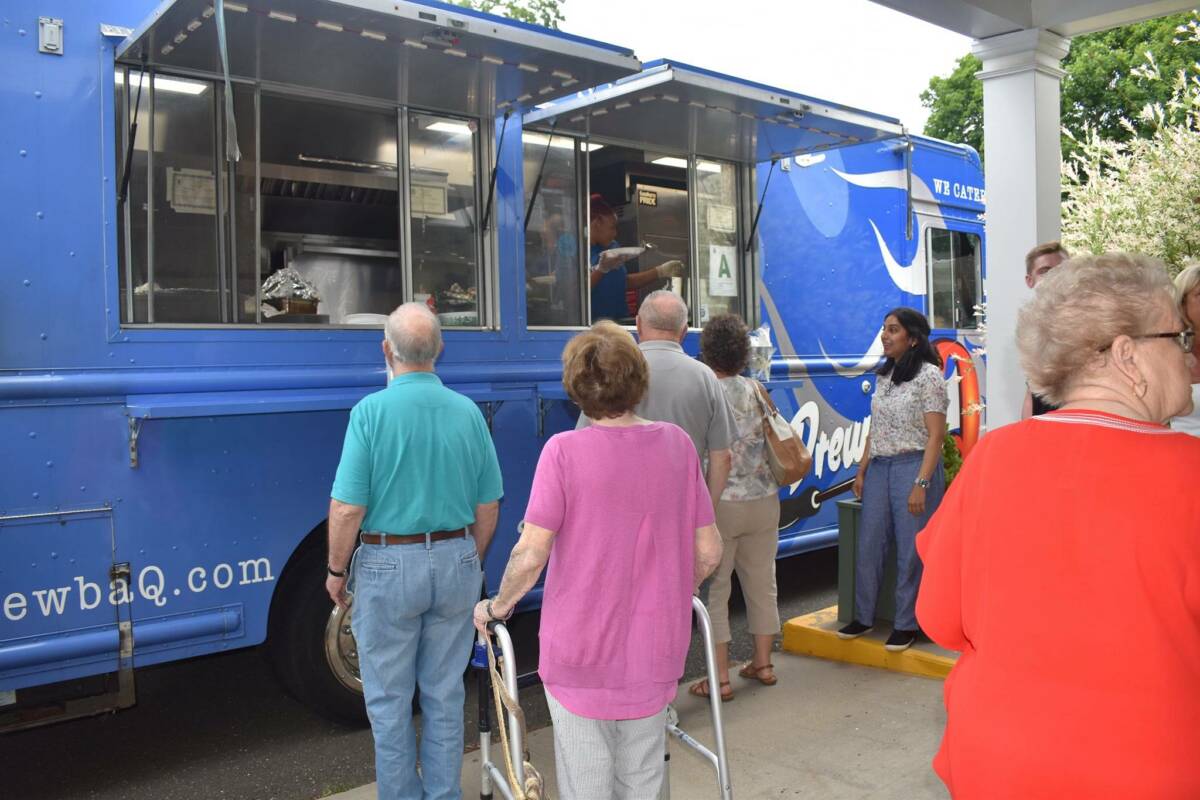