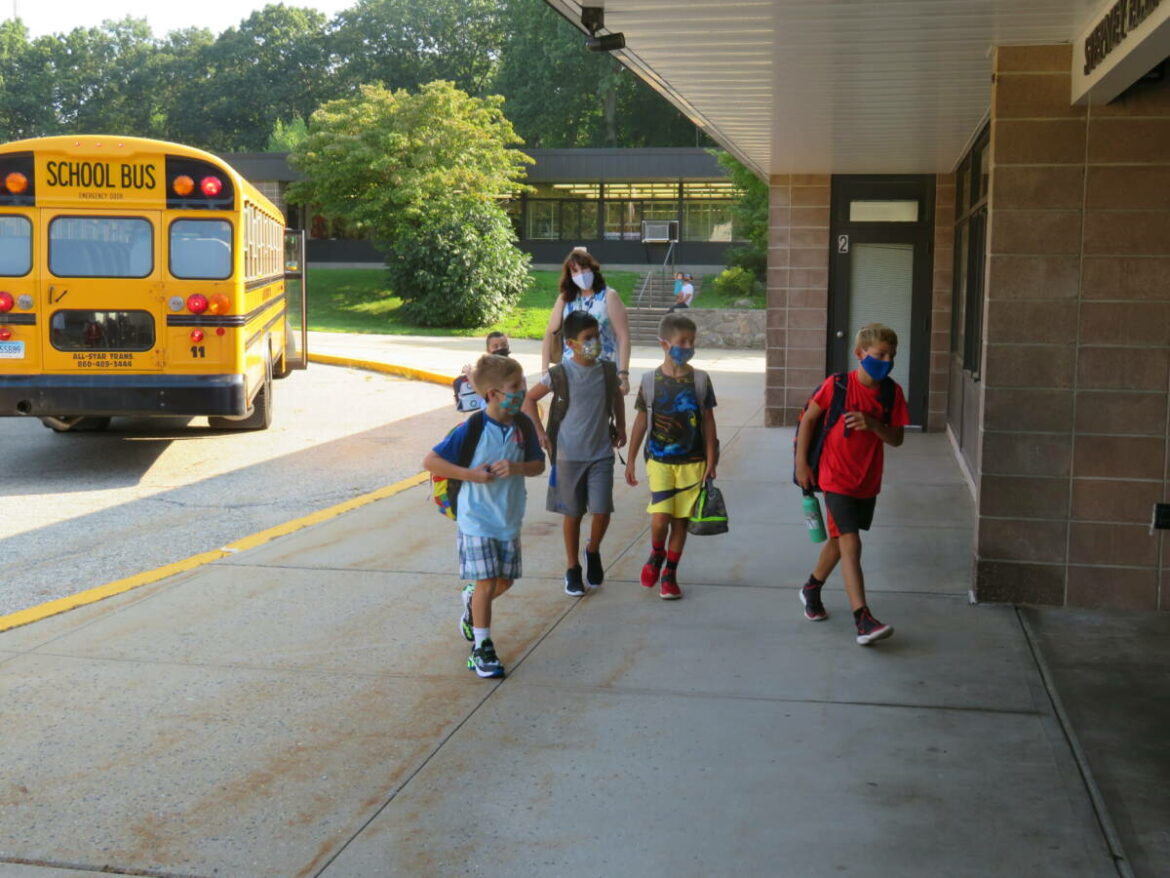 MONROE, CT — Board of Education members voted unanimously to suspend three policies requiring students to wear masks in school from Feb. 28 through June 30, though some remain divided over how effective cloth masks are in preventing the spread of COVID-19.

Superintendent of Schools Joseph Kobza made a presentation at Tuesday’s Board of Education meeting explaining how House Bill 5047, which was signed by Gov. Ned Lamont, ends the mask mandate for public schools on Feb. 28 and gives authority to towns.

Kobza said decisions moving forward are being done in consultation with the Connecticut Department of Public Health and the Monroe Health Department. He also spoke with Dr. Nimrod Dayan, a medical advisor for the school district.

“Part of my recommendation tonight is to continue to follow the guidance of the commissioner of public health, who said we are at the point now where we can think about removing the mask mandate from our schools,” he said.

Kobza said Monroe meets the criteria for switching to a mask-optional policy because vaccinations and self tests are readily available, Monroe has a high vaccination rate (75.92 percent) and cases are low and have been steadily declining since a major spike at the beginning of January.

The state still has the power to reinstate the mandate from now through June 30, 2022, when the Board of Education’s policy committee will revisit the policies (4118.237, 4218.237 and 5141.8). Then the board may decide to extend the suspension or end the policies all together.

Though these policies regulate the wearing of masks in schools, Kobza said federal law still requires students to wear masks on buses. He said that order from the Centers for Disease Control is in place until mid-March.

Kobza said Monroe Public Schools has already ended contact tracing and does not require quarantines for low risk contact. The district encourages families to test their children over the weekend before Feb. 28, but will not police it, he said.

The district encourages families to report positive COVID tests and recommends that isolation guidelines be followed when a child is sick, quarantining for five days, then being masked from days six to 10.

The school district will report positive cases to the state and local health departments.

Kobza asks that quarantine rules for high risk contacts, when a family member has COVID, continue to be followed because statistically it tends to spread to other family members.

The Connecticut Department of Public Health recommends districts be ready to pivot and go back to masking if the pandemic worsens.

Christine Cascella, the board secretary, asked Kobza if bus drivers have boxes of masks for children who forget to bring one and he said they do.

“That would be up to whether the driver reports the kids or not,” said Dennis Condon, a board member.

Cascella said it could be difficult for young children who do not wear a mask at school all day, only to have to find one in their backpack, so they can be allowed on the bus to go home at the end of the day.

“I feel bad for the bus drivers trying to police that,” she said.

Orlando said unmasked children ride the bus with the same kids they go to school with, so it’s not like they are on a bus with strangers.

Condon said he does not think the board needs to worry about enforcement unless a driver complains.

Orlando asked the superintendent if DPH provided any rationale explaining how there was a huge spike in COVID cases in schools in early January when a mask policy was in place.

“No. They repeated over and over the transmissibility of the omicron variant,” Kobza replied.

“Why did we see that if the policy works so well?” Orlando asked of masks. “If they want to put a mask policy back in place, I think this board needs to have a serious conversation around what we need to do. That tells all you need to know about whether a mask policy works or not.”

Nick Kapoor, a board member, said the case rates were for the whole state, not just the schools.

Orlando said school numbers were highest in January and followed the state trend.

Kapoor said they do not have numbers for January of 2021 to compare with 2022 for school rates compared to state rates overall. Then Cascella said vaccination numbers would make it an unfair comparison.

Condon said Monroe’s 75 to 76 percent vaccination rate is evidence of a move toward herd immunity, so COVID is becoming more like the flu.

Orlando read a quote from the CDC from the late summer of 2021: “Surgical masks do not provide the wearer with a reliable level of protection from inhaling smaller air born particles and are not considered respiratory protection.”

“That’s the agency that DPH and all these other agencies are following saying that they don’t work,” Orlando said.

Dr. Alan Vaglivelo, a board member, asked Orlando for his source and he said he read it in a book.

The quote is on the CDC website, which also says N-95 masks filter out at least 95 percent of airborne particles including large and small particles.

“Surgical masks are not N-95 masks that are fitted,” Condon said. “When you wear masks as chin straps and head bands or it has gaps, they don’t work. If you really want kids to be safe have scuba suits.”

“I think everyone knows from a public standpoint I am not supportive of forcing masks on kids,” Orlando said. “I’m supportive of people wearing them if they want to. Parents are the ones who should be making the decisions on the well being of their kids.”

“I just have to push back,” Kapoor said. “Masks do work. They absolutely work. I’m not sure of your source. The CDC has a whole science brief with a sample size of hundreds of thousands that masks do work.”

Kapoor said the whole discussion around parental choice is using the phrase in a “very precarious manner.”

“When students are on school grounds and under the auspices of adults or administrators or teachers, it is the legal, moral obligation of those people to keep the children safe,” he said.

Kapoor said the district is following the guidance of DPH and the Connecticut Department of Education, which have that same obligation.

“Nick, do you consider mental health part of safety?” Orlando asked. “Because over the last two years we’ve seen a huge increase in mental health issues that clearly the one driving factor is COVID and public policy, right?”

“I think COVID is definitely part of that, but there are other factors,” Kapoor said.

Arguments among board members ensued with accusations of cherrypicking studies and ignoring contradictions.

Cascella said the conversation would end if board members could see the smile on her six-year-old daughter’s face when she told her she will not have to wear a mask.