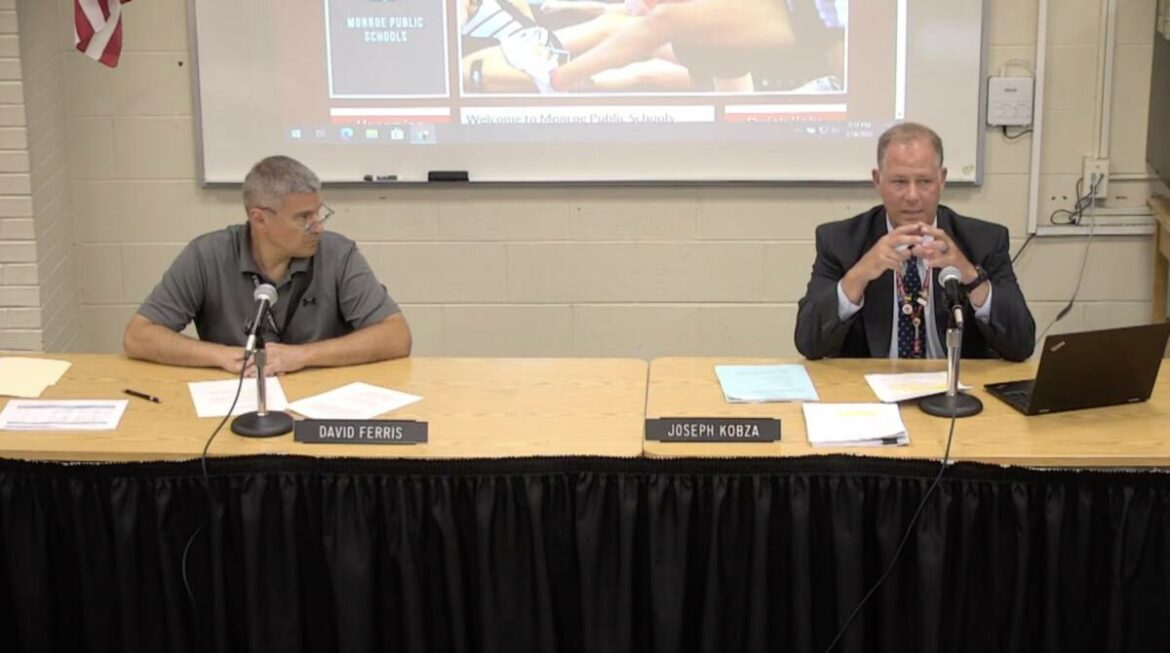 Superintendent of Schools Joseph Kobza, right, provides an update during the Monroe Board of Education meeting last week, as Chairman David Ferris looks on.

Kobza said those who have driven by Monroe Elementary School may have noticed paving being done in the front parking lot.

“We had that huge pothole that in the wintertime became like a skating rink, because it filled with water, then it turned to ice,” he said.

When it rained last Monday, Kobza said he was nervous to see where the water would go.

“They had it nicely going straight out into the grass area and, so not to create any other puddling, they created a pretty good berm there,” Kobza said, “so the water from the street doesn’t come out into the driveway.”

During last week’s school board meeting, the superintendent provided a breakdown of the biggest projects, which are being overseen by Dan Krofssik, director of maintenance for the district.

“There’s a whole bunch of projects going on,” Kobza said. “The walk-in freezer and refrigerator at Fawn Hollow has been removed and we’re getting ready to install a new one.”

A new gym floor will be installed at Stepney Elementary School, but the old floor had mercury and an abatement must be done first, according to Kobza.

“There is a new steamer and dishwasher in the cafeteria,” he said.

The driving pattern in the parking lot changed during the COVID-19 pandemic and Kobza said, “we finally paved the access road.”

Underground oil tanks at Jockey Hollow Middle School are being removed in favor of an above ground tank, according to Kobza. The building is now on gas heat, so the oil will only be used to power the generator.

He said the same thing has been done at Masuk High School.

The floor of the Jockey Hollow gynasium was stripped down to the bare wood, so it can be restriped and resealed.

“This is done every 10 years,” Kobza said. “On other years they just do a scratch and coat. This is taking it down to the bare wood, which it needed.”

At Masuk, the stage floor in the auditorium is being replaced and paving is being done behind the school.

Kobza said this is in addition to the major process of removing all of the furniture and unhooking electronics from every classroom, so the floors can be stripped down and rewaxed.

“It’s a huge, huge, huge process and part of the regular maintenance that happens in the summer, along with all of this other big work that’s going on,” Kobza said.

Board of Education Chairman David Ferris said he walked some of the schools with the superintendent and saw the tremendous amount of work Krofssik and his crew have been doing.

“Good job with everything,” Ferris said. “The schools are going to look nice in a couple of months.”