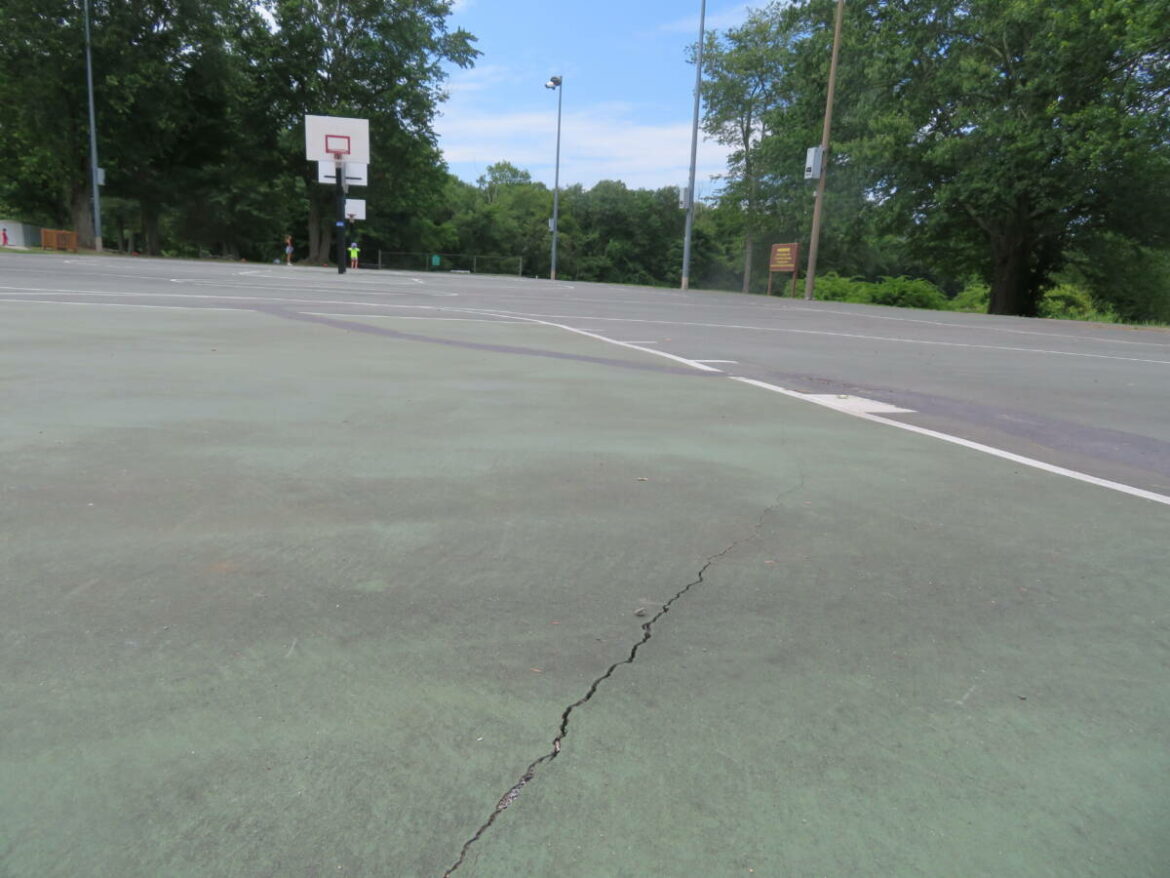 Cracks are showing in the basketball courts at Wolfe Park. A $150,000 state grant will be used to resurface courts at the park.

MONROE, CT — Monroe was recently awarded a $150,000 grant for athletic facility upgrades at Wolfe Park. First Selectman Ken Kellogg says the aid will be used to repair, regrade, resurface and re-stripe the courts — projects listed among the town’s priorities.

“These courts are heavily used and in need of significant repairs,” he said in a news release. “Having state funding available to support this project will directly help the Monroe community.”

The first selectman said the project will include line striping for both basketball and pickleball, adding Parks & Recreation Director Missy Orosz recommended the dual striping, given the huge popularity of both sports. 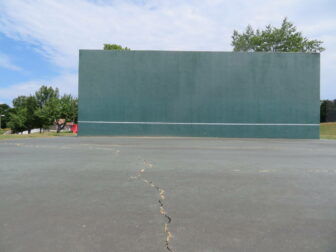 The practice area for tennis at Wolfe Park is riddled with cracks.

On Friday afternoon, cracks were visible on the basketball courts at Wolfe Park and some had been filled in. Cracks could also be seen on the practice tennis courts.

Soorya and Santosh Chenthilnathan played tennis inside the fenced in tennis courts atop the hill. Those courts appeared to be in good shape, but Soorya remembers the condition before it was resurfaced six-or-seven years ago.

“It used to be really bad,” he said. “The court was peeling and, when it rained, the cracks would fill with water and there were puddles everywhere.”

“I think it’s great,” Chenthilnathan said of the state funding being used to resurface courts in the park. “This is something they should do, especially for the high school and middle school,” he added of keeping up with maintenance.

Masuk High and Jockey Hollow Middle schools do not have tennis courts of their own, so boys and girls teams play matches at Wolfe Park, said Chenthilnathan, who used to play at Masuk. When those courts are not available, Chenthilnathan said students have to pay to play elsewhere. 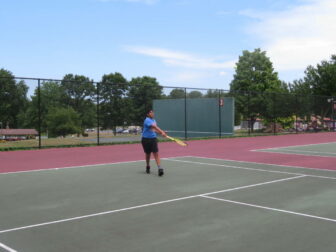 Santosh Chenthilnathan hits the ball over the net while playing tennis at Wolfe Park Friday afternoon.

On Friday, Kellogg and members of Monroe’s state delegation expressed their gratitude for the state aid.

“Wolfe Park is a wonderful resource and gathering place for our community and local families,” Kelly said. “From the recent new construction of its community-built accessible playground to exciting improvements coming to its athletic facilities, there is much to celebrate and appreciate. I thank the State Bond Commission for recognizing the importance of investing in Monroe and continuing to support and enhance our community resources.”

“Monroe’s Wolfe Park is a destination for so many of our residents and families in town, as well as groups in Stratford, Trumbull and Bridgeport, among others,” Scott said. “Basketball courts and sports fields are where our kids learn about sportsmanship and teamwork, but some of the park’s courts are in need of repair, limiting the activities of our youth groups, campers and residents. Now, improvements are on the way, thanks to the commission’s decision today. I will continue to support these projects and others like it.” 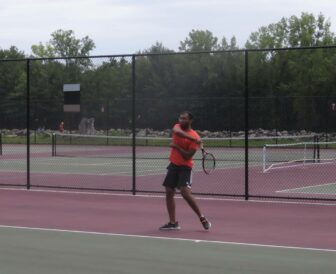 “Our communities deserve the best and when facilities and different areas of our state are upgraded, increased safe access is improved,” said Moore. “Upgrading the athletic facility at Wolfe Park supports our youth as we look to provide a rehabilitated area for children to build upon their skills. An upgraded facility will work to promote a more welcoming environment for children to practice.”

Kellogg said, “I am extremely grateful for this approval from the State Bond Commission and for the unanimous support from Monroe’s state legislative delegation.”