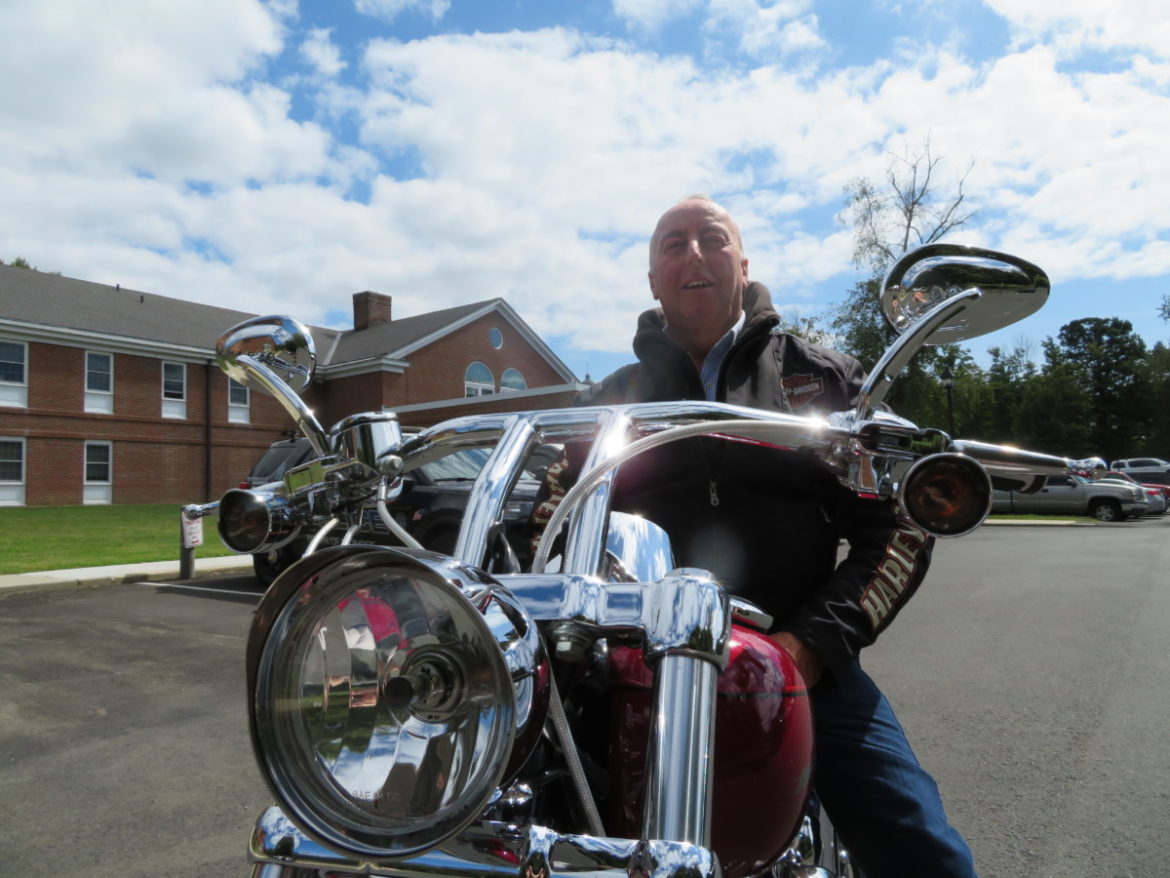 After 25 years on the job for the Monroe Police Department, Mark Abriola is ready to ride off on his Harley. The police officer retired this summer.

Mark Abriola will ride off into the sunset on his Harley this summer after a 25-year-career as a Monroe police officer.

During that time, Abriola, 63, served on the department’s domestic violence team, was a detective and worked as a hostage negotiator on the regional S.W.A.T. team for several years.

“Ever since I was a kid, it was my dream to be a police officer,” Abriola said during an interview at The Last Drop coffee shop. “I looked up to the police officers, because they were professional and I wanted to have a job where I could be an active part of the community I live in and make a difference.”

Abriola and Lyn, his wife of 20 years, live in Monroe, but he grew up in Trumbull.

He was hired as a part-time Monroe police officer when the late Robert Wesche was chief and enrolled in a police academy run by the Milford Police Department.

“Things were done differently back then,” Abriola said. “An officer would start out part time to give you an opportunity to see if you were interested in the job, and for them to see if you’re cut out for it.”

Abriola said new officers had to drive themselves to the academy and pay their own way.

“I would ride with officers on the weekend and get the practical experience,” Abriola recalled. “It would also give you the opportunity to see who you would work with. I like the system better than what we have now.”

Chief Wesche swore Abriola in as a full time officer after six months on the job.

Chief John Salvatore said Abriola earned an accommodation as a detective for his role in the first case the department solved using DNA evidence.

In November of 2005, two robbers entered the Dunkin’ Donuts at the corner of Main and Elm streets just after midnight. One man was armed with a gun and the other grabbed a metal rod and beat the two employees with it.

One victim fought back and as the robbers fled, one of them dropped his bandana.

“We collected items touched and left behind by the robbers,” Salvatore said. “It was the first case that Monroe used DNA to make an arrest.”

The investigation led to two arrests and convictions. The chief said interviews conducted by Abriola assisted in building the case.

Abriola also received an accommodation for a domestic disturbance that occurred around 11:30 p.m. on Dec. 19, 2011.

A man with a sharp-edged weapon, locked himself in his house and did not let police officers inside. Abriola began a dialogue with the agitated man, listened and was nonjudgemental, calmed him down and earned his trust, according to police.

With the situation under control, officers were able to make the arrest without anyone getting hurt.

“These are just two examples of how his communication skills were relevant to our investigations,” Salvatore said of Abriola.

Abriola said Brian McCauley, who recently retired as a police lieutenant, was an officer he looked up to.

McCauley said Abriola is a good officer and a good friend.

“I supervised him when he was in the detective bureau and he was very tenacious and thorough in his investigations,” McCauley said. “Mark believes police officers are an important part of the community, and as such, he made sure he knew as many people as possible in his patrol area. He would stop in at different stores and shops and check on the owners and employees. I was honored to have served with Mark.”

Abriola said he likes the Coffee With a Cop program, which gives residents a chance to meet with an officer and talk about community issues.

‘You saved my life’

Over the course of his 24-year-career, Abriola went from filing handwritten reports using a clipboard to typing everything up on a computer in the police car. He said he made lifelong friendships and will miss his interactions with people most of all.

Among the memories that stand out to him, Abriola recalled how Monroe police officers made everyone from Sandy Hook Elementary School feel safe when the town allowed them to us Chalk Hill after the tragic shooting at their school seven years ago.

“It was rewarding to provide security for the students at Sandy Hook Elementary School, meet the parents and show compassion for the families,” Abriola said. “We all walked away with a feeling of satisfaction that we were able to make a difference with their lives.”

Abriola also remembers being called in as a negotiator when a man wanted to commit suicide by jumping off a cliff on a campground near Stevenson Dam.

“He lost his job. He was despondent. He couldn’t provide for his family, so he felt worthless,” Abriola said of information gleaned from his 45-minute conversation with the man. “I talked him back from the cliff and he sought medical help. Years later, he walked up to me and said, ‘you probably don’t remember me, but you saved my life.'”